Most tourists taking Metro Line 11 might head to Shanghai Disney Resort or to the Shanghai Circuit when the Formula 1 Grand Prix is on. However, the line is equally interesting for those who like food and culinary history. It takes you to the birthplace of xiaolongbao, the juicy steamed bun specialty of Shanghai, and to the town in the Pudong New Area known for the city’s most authentic family cuisine. This installment omits the “where to grab a bite nearby” tips because every stop is a culinary adventure.

You can’t miss this old street dating back more than 1,000 years because a pair of remarkable pagodas mark its central square.

The twin pagodas are one of the few relics preserved since the early times of the town. They were once part of the Baihe Nanxiang Temple. The story goes that before the temple was built, a pair of white cranes (baihe) were seen flying south (nanxiang). That was considered an auspicious sign.

The temple, as well as the town, was ruined and rebuilt multiple times ever since. And now, people visit Nanxiang for reasons beyond just praying to Buddha or viewing the old pagodas. They are there to eat the most authentic xiaolongbao in the city. 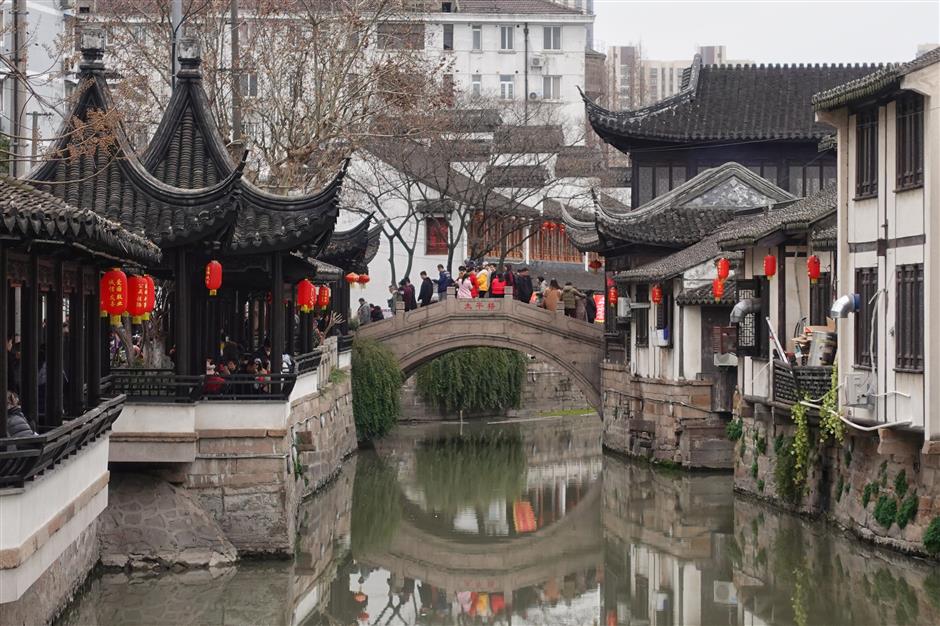 Not far from the entrance of the town is Changxinglou, one of the earliest eateries specializing in the savory steamed buns in Shanghai.

The founder of the restaurant was either the son or the brother-in-law of Huang Mingxian, who created xiaolongbao in 1872. Huang was inspired by the commonplace steamed bun, but he minimized the size of the bun, used a different type of flour mix to thin the wrap and added pork-skin jelly to the stuffing to create meat juice inside the bun.

The owner of Changxinglou promoted xiaolongbao to the whole city. He opened a branch near City God Temple downtown, which remains very busy even today. Changxinglou is now known as the Nanxiang Steamed Bun Restaurant, a must-try eatery on every travel guide for Shanghai.

Although xiaolongbao restaurants are everywhere in the city nowadays, Nanxiang still stands on a pedestal because of its history and because of the chefs employed at the eatery.

At Changxinglou, staff members explain what makes the best xiaolongbao: the need to make 18 pleats when you wrap up the mini bun, the perfect proportion of pork-skin jelly in the stuffing, the need to use the best meat available because no green onion or ginger are added to the pork stuffing.

They even tell you the best way to eat the delicacy: Never pop the whole bun in your mouth or your tongue may be burned when the hot juices from the stuffing spew out.

Before high-rise apartment blocks and skyscrapers mushroomed in the city, the Longhua Pagoda in Longhua Temple in Xuhui District was a tall landmark that could be seen from afar.

Every day at sunset, when the temple bell rang, the silhouette of the pagoda standing against the orange glow of twilight created a stunning sight much celebrated by poets and artists. It was one of the “Eight Best Views” recorded in the Shanghai Annual compiled in 1588.

The earliest written record of the temple dates back to AD 977, but local people believe the structure was first built 700 years earlier by Sun Quan, founder of the state of Wu during the Three Kingdoms period (AD 220-280), for his mother.

Current relics in the temple mostly date from the Song Dynasty (960-1279), including a boundary monument and the pagoda itself. 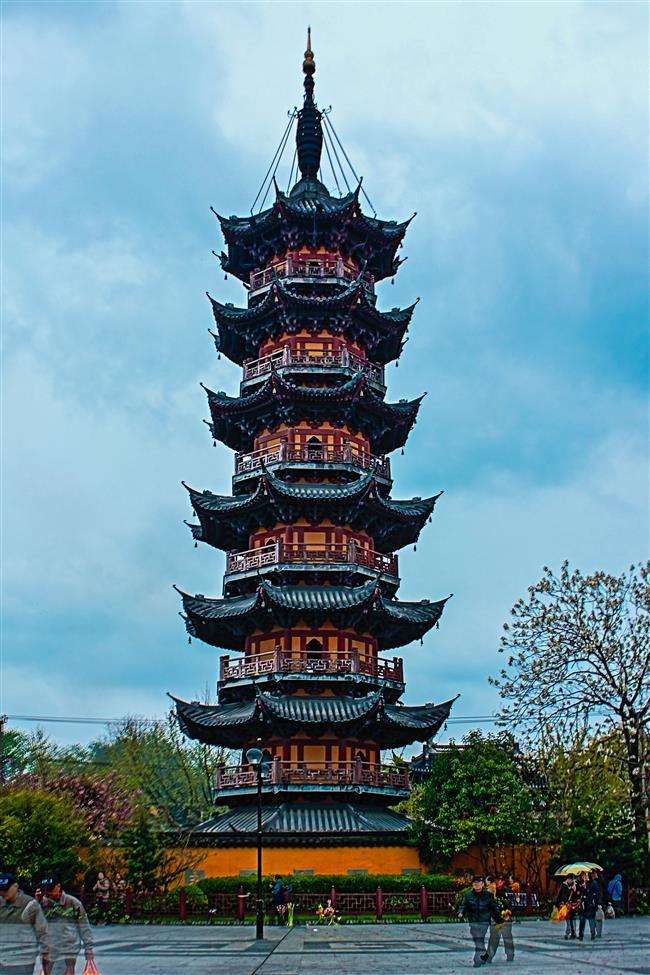 The oldest Buddhist temple in Shanghai, Longhua is known for blessing the careers of people. Every New Year’s Eve, people gather at the temple, hoping that the 108 tolls of the bell will bring them good luck in the next 12 months.

But it’s not only blessings that attract people to the temple. The vegetarian food served at the temple canteen is part of the New Year ritual.

Every Spring Festival, yuenian noodles, or “noodles for entering a new year,” are served there. Long lines of people wait to get into the canteen to eat a dish available only in this season.

A plate of bean products — such as “vegetarian chicken,” a type of deep fried and stewed bean curd roll — goes well with the noodles.

Eating yuenian noodle soup has become a routine for many families. On New Year’s Day, they get up at sunrise, converge on the temple from all corners of the city and say prayers for the new year. A bowl of vegetarian noodles rounds out the trip.

While the name Sanlintang may be familiar to most people in Shanghai, many locals have never actually been to this ancient commercial town in the Pudong New Area. At first glance, it isn’t much different from walking in any old watertown, where a river bisects rows of ancient houses and locals sell specialties such as pickles and embroidered handicrafts.

Scenery and tourist souvenirs aren’t the main attractions for visiting this more than 1,000-year-old town.

The big drawcard is benbangcai, or authentic Shanghai cuisine.

The rudiments of this cuisine date back 500 years. Some of the dishes popular today were earning plaudits for Sanlintang chefs even back then.

After Shanghai opened as a commercial port in the 1860s, Sanlintang chefs saw great opportunities and left their home villages for the downtown to run restaurants. One of them, Li Genlin, founded Dexingguan Restaurant, which is still an iconic eatery of Shanghai cuisine today.

However, the Sanlin Benbang Restaurant is the spot where many locals believe the most authentic Shanghai cuisine is served. The venue remained fairly low-key until the popular TV documentary “A Bite of China” suddenly shone a spotlight on Sanlintang. Throngs of people came to taste kousansi, or braised “three shreds.”

The signature dish of the restaurant is made of shredded chicken, ham and bamboo shoots. All the ingredients are cut into slices as thin as a piece of paper, and then cut into very thin tassel-like shreds. It takes an experienced chef an hour to do the preparation work, and people have to pre-order in advance. Pre-orders are accepted only when the chefs have time.

Authentic Shanghai cuisine is not particularly healthy. It is greasy, uses a lot of soy sauce and even more meat. But for those with memories, the food takes them back to earlier times and many savor it. 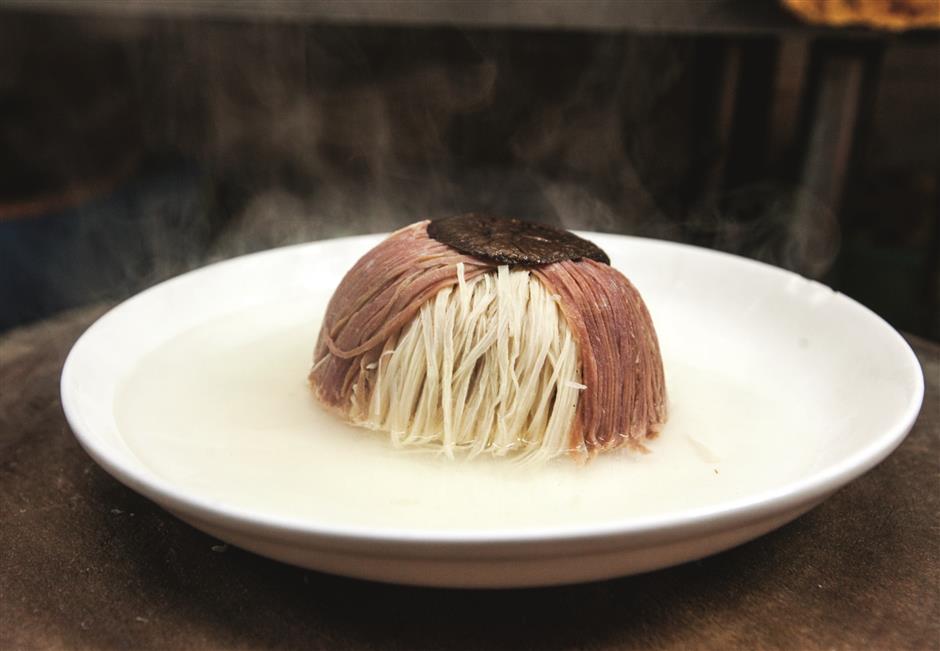 The making of kousansi tests a chef’s cutting skills. Not many chefs are qualified enough to make the dish.

The old street starts from the crossroads of Donglin Street and Sanxin Road.

﻿
Special Reports
ADVERTISEMENT
61886
,
Old mansion's delicate woodcarving exemplifies the passing of an era
Shanghai has an island? Yes, and it's the perfect weekend getaway!
It's time for tea at the Du Family Residence
Just an hour from the city center, the graceful elder sister …
Xinjiang travel vlog: Andy checks out the capital city, Urumqi
Xinjiang travel vlog: Andy checks out the ancient city of Kashgar
Obscurity lends magical charm to an old villa garden
Restored admiration for Zhu family in Songjiang
An island park so close to downtown but still obscure
Hangzhou enticing non-natives to stay put over holiday
EXPLORE SHINE