A step back in time in any language in Songjiang 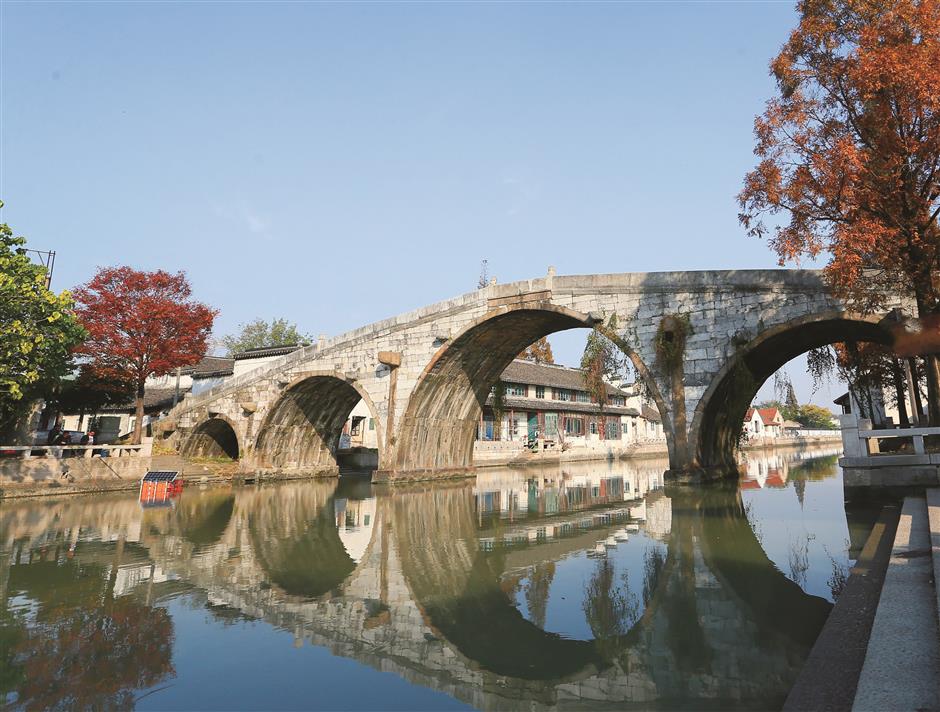 For people who attach special sentiments to Oriental-style architecture, Cangcheng Historic Cultural Zone and Sijing Old Town are recommended places to go. The newly opened Museum of Language on Shanghai International Studies University’s Songjiang campus is also a good choice to learn the origins of languages and their vicissitudes throughout history during the Lunar New Year break. 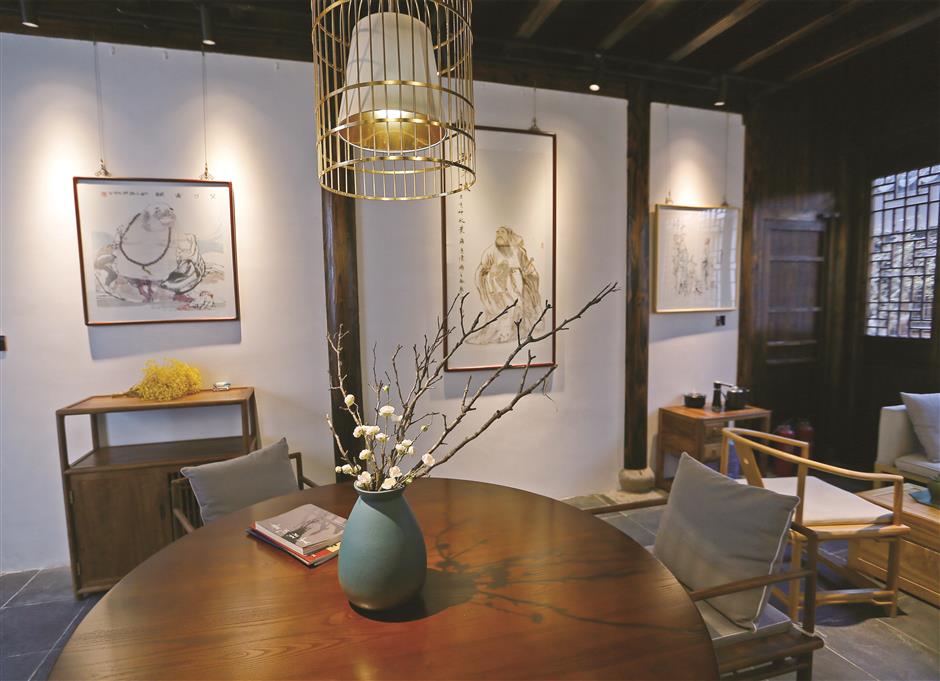 The interior of an ancient house in Cangcheng Historic Cultural Zone

Cangcheng got its name from its function as the largest tribute grain storage site and water transport station in Songjiang in the Ming (1368-1644) and Qing (1644-1911) dynasties. Records show that in the mid-Qing Dynasty half of the 417,300 shi (a measure for grain in ancient China) of tribute grains Songjiang collected for the imperial city were stored in Cangcheng.

Nowadays, the zone’s well-preserved historic sites include the Mengjiang Pavilion, the Guanding Buddhist Temple, the Du Family Engraved Building and the Anjiu and Dacang bridges. City dwellers, when they tire of the hustle and bustle, can refresh themselves in Cangcheng by chatting with its elderly residents and visiting its ancient buildings and bridges.

Cangcheng is divided into east and west parts by both Yushu Road and Yushu Bridge. Near Yushu Bridge is the Guanding Buddhist Temple and in front of the temple entrance there is the Mengjiang Pavilion. Legend has it that Lady Mengjiang, whose new husband died from fatigue in the building of the Great Wall in the Qin Dynasty (221-206 BC), started her tens of thousands of miles’ journey north to seek her husband from the pavilion.

On the other side of the pavilion is the renowned Dacang Bridge and at the south end of the bridge is a big blue stone that Lady Mengjiang is said to have once sat on.

About 127 ancient structures dating from the Ming and Qing dynasties and the Republic of China (1912-1949) are well preserved in the zone. Among them the Du Family Engraved Building, once the residence of local squire Du Lingmei, is praised as the most beautiful ancient architecture in Songjiang for its delicate woodcuts. The building, a three-courtyard, two-story Hui-style structure, is now an intangible culture heritage learning and teaching base. Nearly 20 intangible culture heritages including Jiangnan sizhu (string and wind music) and Gu-style embroidery are displayed here.

To the west of Yushu Bridge is Anjiu Bridge. Built in the Southern Song Dynasty (1127-1279) and the largest stone bridge in ancient Songjiang, it is also known as Yunjian No. 1 Bridge (Yunjian is an alternative name for Songjiang).

In the annual water transport season in the Ming Dynasty, cargo ships belonging to different shipping groups would be anchored in the Gupu River and sailors, most of them hailing from north China, would sell cabbages, pears and jujubes from street stalls near Dacang Bridge. 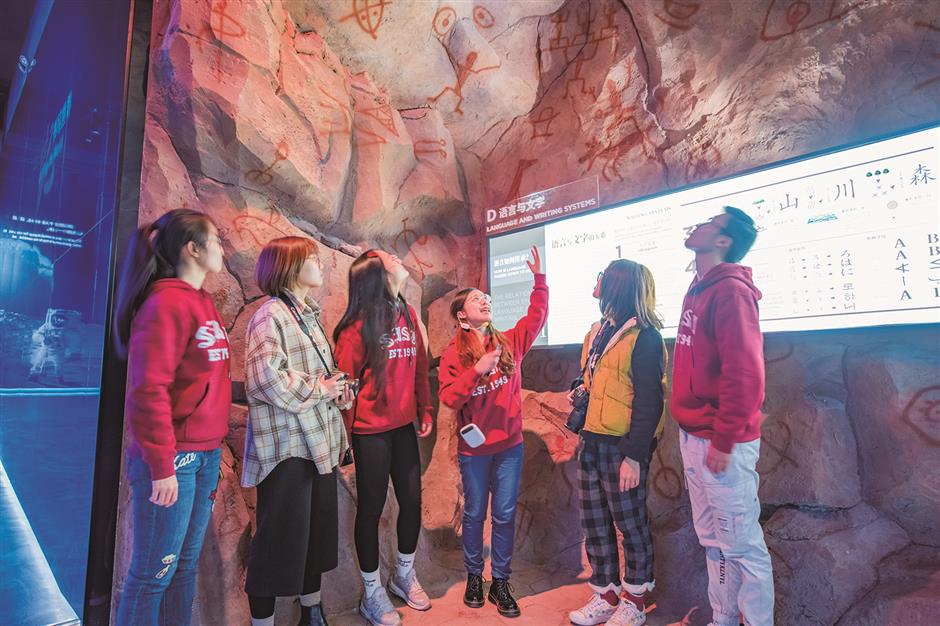 Students of Shanghai International Studies University volunteer to work at Museum of Language.

The Museum of Language opened to the public on the Songjiang campus of Shanghai International Studies University on December 8, the 70th anniversary of the university. It is the first museum in China to focus on the diversity of languages.

There are more than 7,000 known languages in the world, but only about 60 language museums, according to Gu Yiqing, chief director of the new museum.

The museum covers topics from the birth of a language to its evolution in the digital world, from the world’s major writing systems to translation and intercultural communication.

To make the intangible subject more visible, the museum has many interactive installations. On entering, visitors will see a digital screen showing a world map on the ground and a curved screen on the wall. By pointing to an area on the map and moving it into the middle, visitors will see an introduction to the language of the area on the screen.

There is also a huge map on a wall that shows the distribution of different language families around the world.

Under the map, there is a pavilion where visitors can learn to say “hello, nice to meet you” in different languages and record the sentence in the dialect of their homelands. 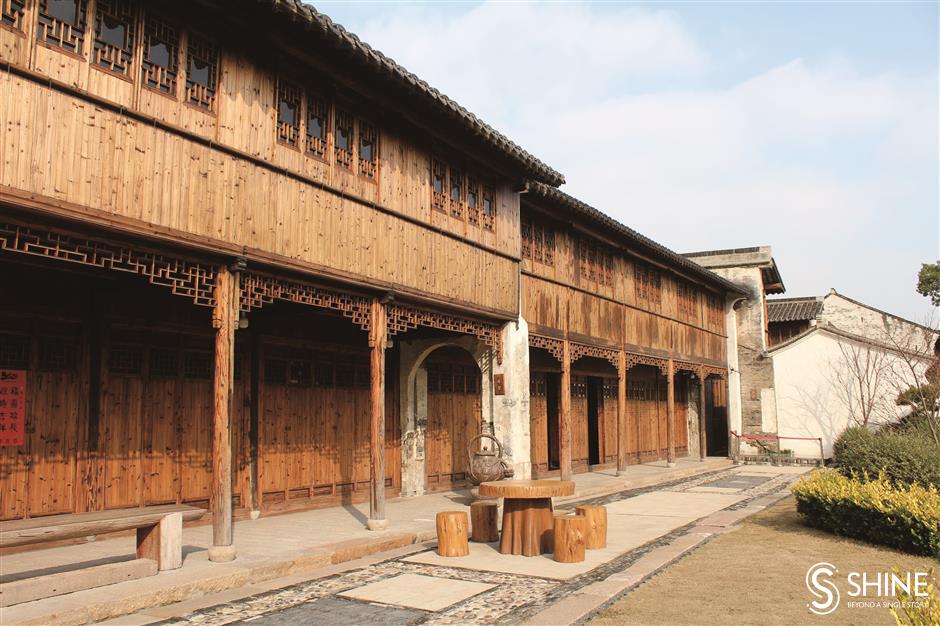 A back yard of the three Sijing stone-gate courtyard houses looks peaceful and quiet in a sunny day.

A traditional Chinese archway on Kaijiang Road marks the main entrance of Sijing Old Town. Behind that is the Anfang Pagoda, a landmark local people compare to an arrow. With the Pudu, Wu’an (both now gone) and Fulian bridges that were known as “the three bows,” the pagoda and bridges were believed to have kept the town safe.

Beside the pagoda are three traditional stone-gate courtyard houses that have been renovated.

The westernmost of the houses is the Cheng family dwelling, first built in the Ming Dynasty (1368-1644). The other two, the homes of the Sun and Guan families, were built in the Qing Dynasty (1644-1911). The names reflect the current owners, not the original families.

The outer walls of the three buildings are connected, and each building has an imposing wooden door.

The Sun family dwelling is now an architectural heritage conservation teaching and research lab of Shanghai Jiao Tong University. An exhibition of dismantled timber components is on display at the dwelling.

The exhibition originates from a migration story. More than 10 years ago, 15 traditional houses in Huizhou (now Anhui Province) were dismantled into more than a thousand timber components, later stored in the warehouse of the Minhang Campus of Shanghai Jiao Tong University. Today, some of these timber components have been incorporated in a new building at the university. Others, intended for display, teaching and research, have become independent timber artifacts at Sun House in Sijing Town.

Guan House, with its white walls and gray tiles, has been converted into a new-concept bookstore called Nan Cun Ying Xue, or South Village in the Reflections of Snow.

Nan Cun, or South Village, is from Nan Cun Cottage, a building once south of the Sijing River and built by ancient writer Tao Zongyi. Ying Xue, or the Reflections of Snow, is from the Ying Xue Building, former house of ancient scholar Sun Daoming.

The three courtyard houses, after careful renovation that preserved the antique architecture as it used to be, irradiate a new life that amazes every visitor who happens to walk past the old town. 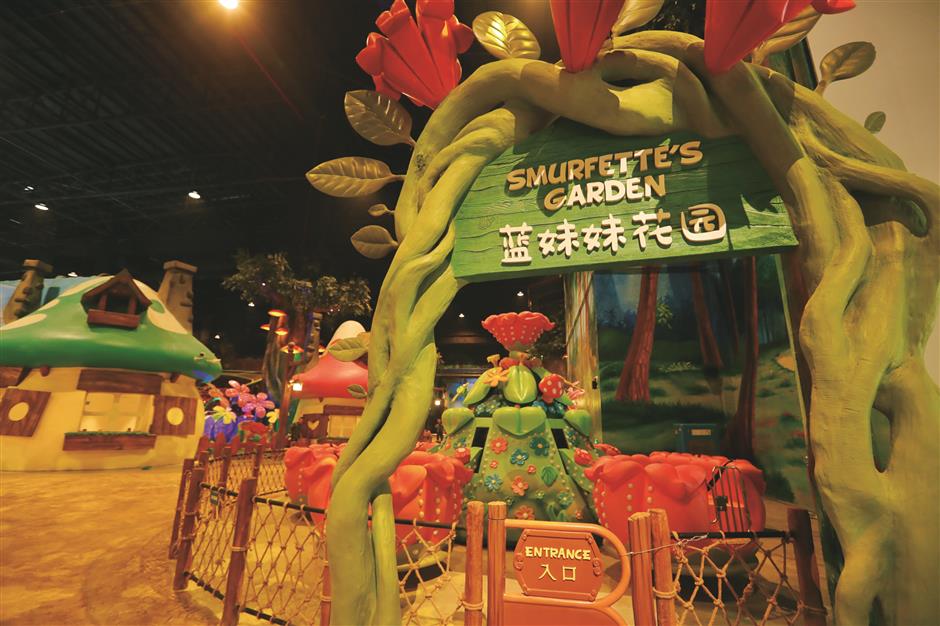 The Smurfette's Garden at Dream City 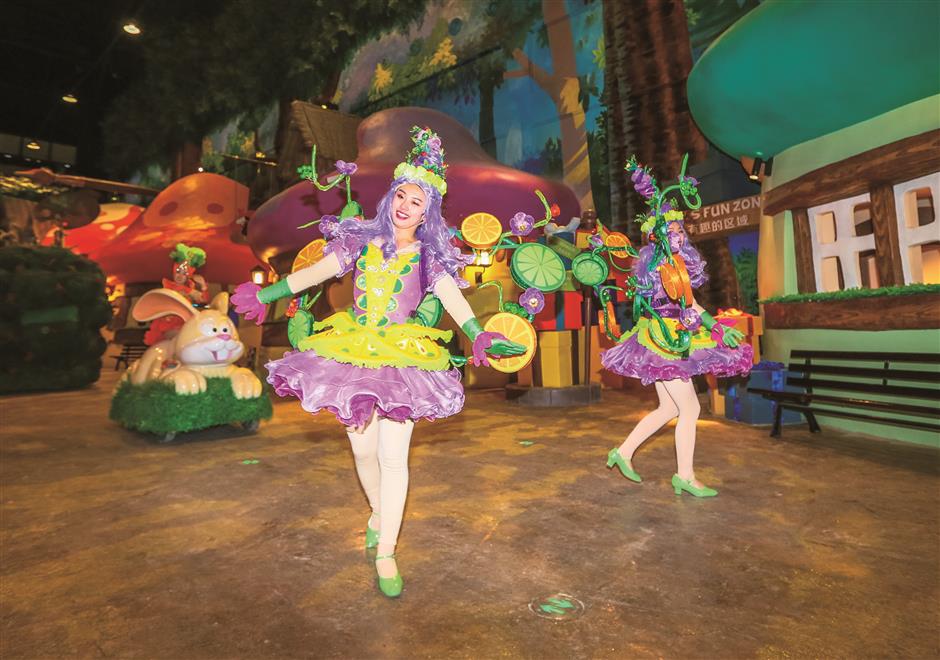 Dream City, the first theme park in Asian-Pacific region featuring world-renowned animation “The Smurfs,” opened to public in Sheshan National Tourist Resort in mid-December. “The Smurfs,” since the first broadcast in China in 1986, became treasured childhood memories of China’s 1970s and 1980s generations. The park, covering an area of about 19,300 square meters, comprises eight entertainment attractions including a 6D cinema, a children’s experience hall and an earthquake museum.

Magic of the Circus 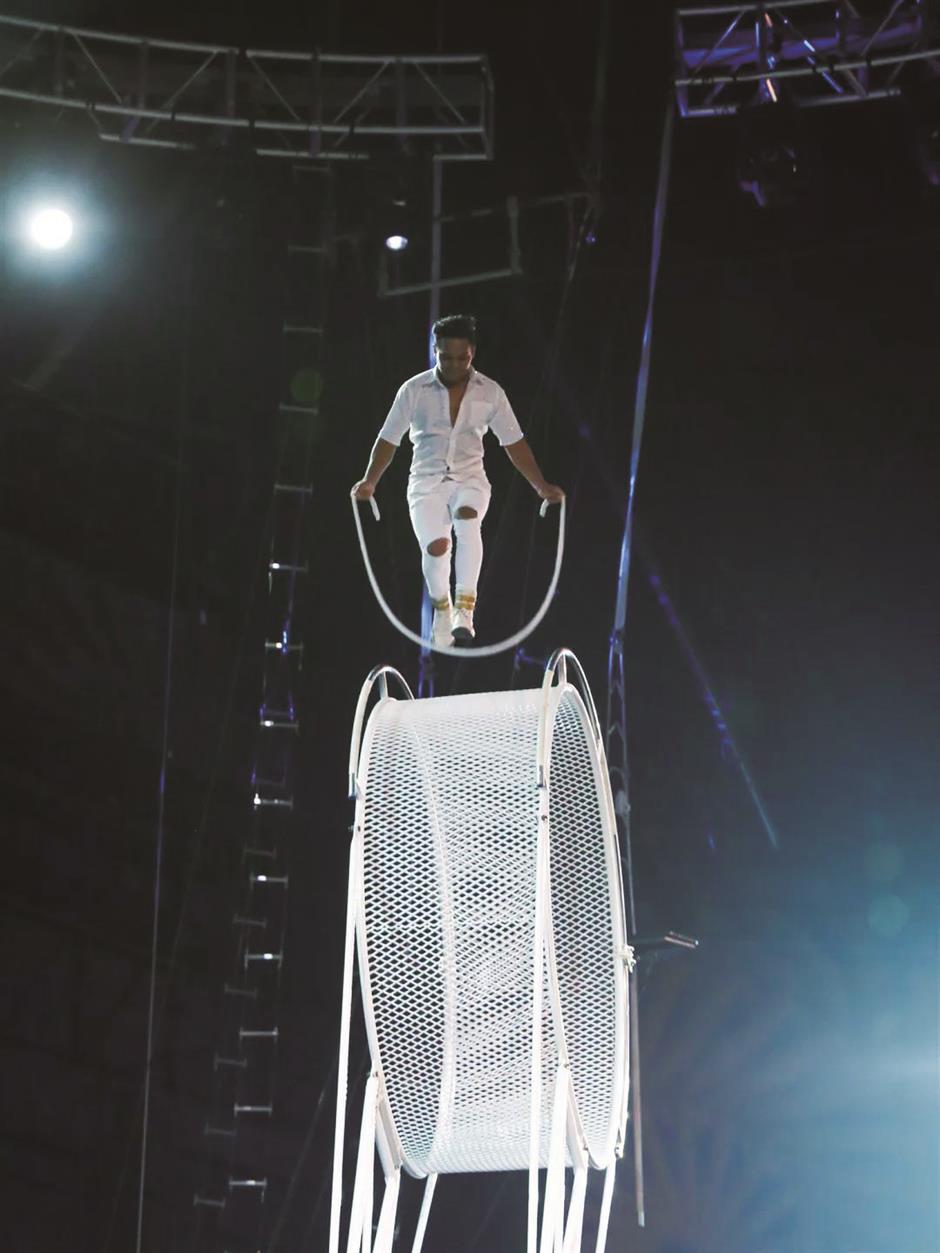 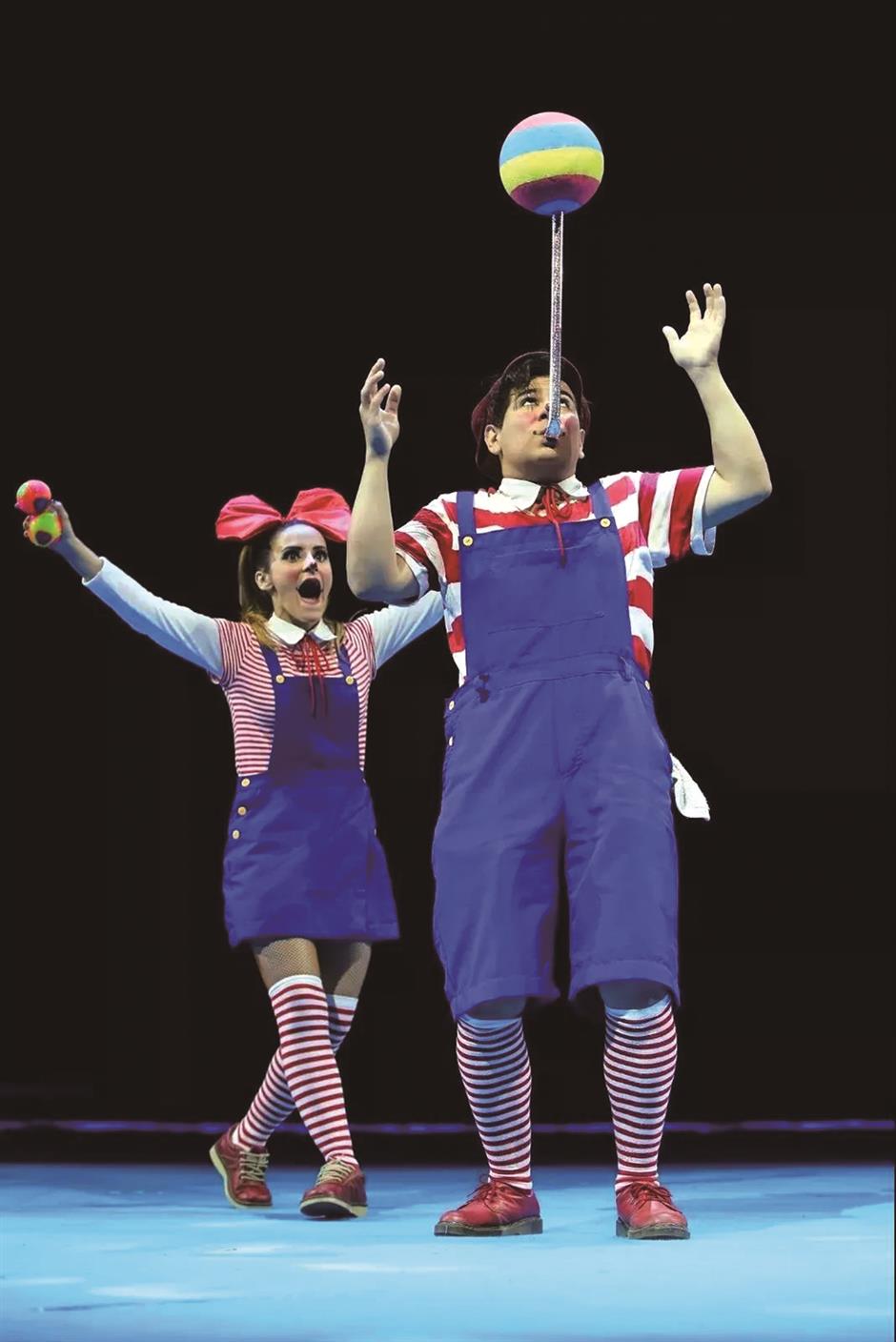 “Magic Circus,” Shanghai’s new circus without the participation of animals, has been gaining in popularity since its debut at the OCT Theater in Shanghai Happy Valley in autumn last year. At the 4,000-capacity theater, circus actors and actresses from more than 10 countries in America, Asia and Europe perform stunts including “flying trapeze,” “bounding table” and “magic wheel.” 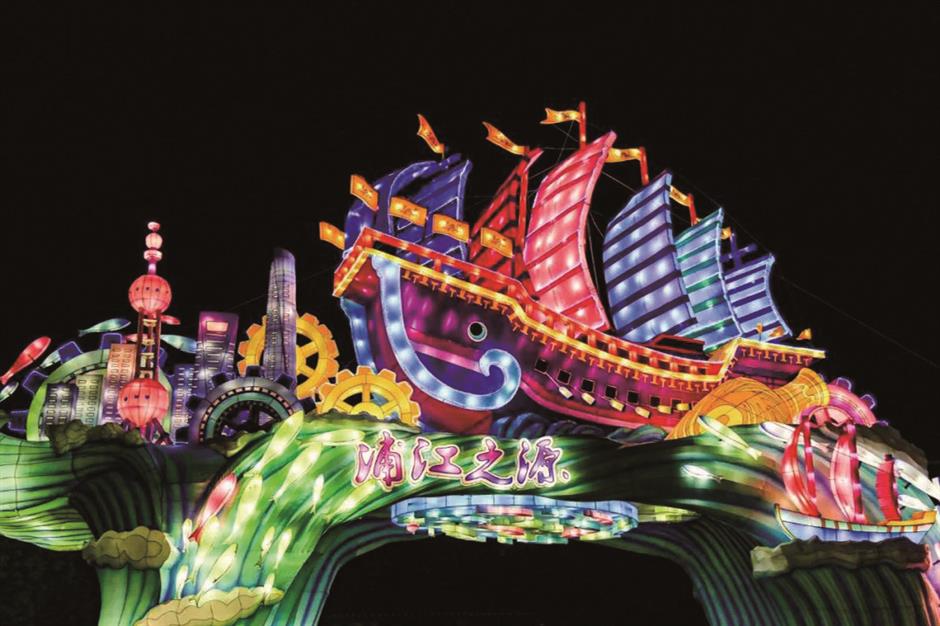 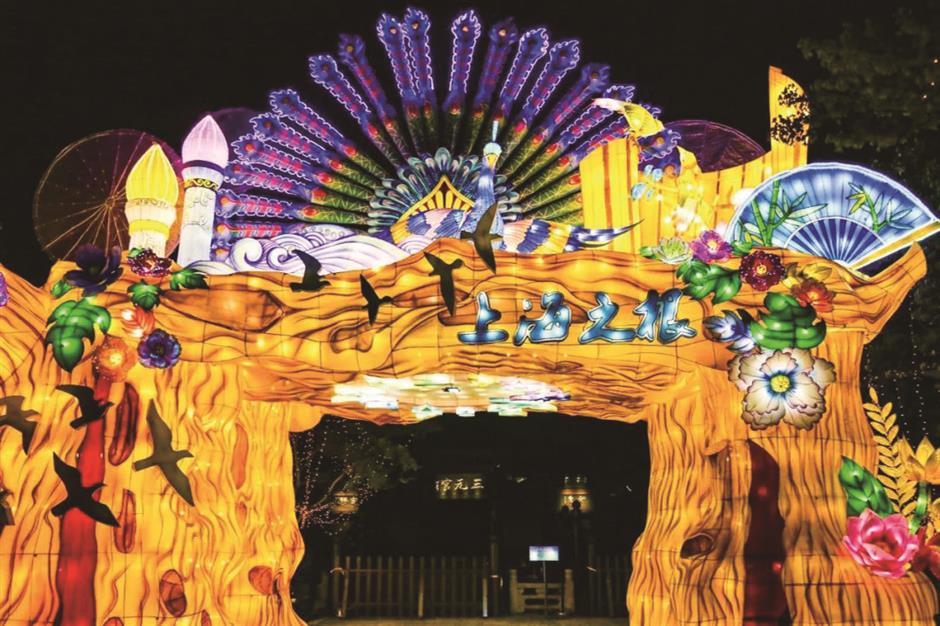 Songjiang residents or out-of-towners who have a Songjiang residence permit can enjoy a light show for the special price of 30 yuan (US$4.3) at Guangfulin Relics Park before January 23. The light show opens from 5:30pm to 10pm daily. The park is illuminated by 40 groups of lanterns covering nearly 100,000 square meters and traditional Chinese folk music is played.

﻿
Special Reports
ADVERTISEMENT
61771
,
For a spring break, take a stroll in our beautiful backyard
Been there, done that? Not at these quirky sites
B&Bs in rural areas add artistic flourish to farmland holidays
Xiangshan awakens with arrival of spring
Hangzhou abounds with festival activities
A step back in time in any language in Songjiang
Fudan University founder's home is renewed
Mount Chaoshan celebrates plum blossoms with cultural activities
All aboard for a culinary excursion that will tantalize the taste buds
An excursion that gives us something to think about
EXPLORE SHINE