Xiangshan awakens with arrival of spring

A bird’s-eye view of the coastal areas in Xiangshan

When the first thunder of spring woke hibernating insects, work resumed at Xiangshan Global Studios. Beside the sea and at the foot of Lingyan Mountain in Zhejiang Province, the popular site for filmmakers is where “The Longest Day in Chang’an,” one of China’s hottest online dramas, was made.

It is also the birthplace of the latest hit drama series “Royal Nirvana,” “Qing Yu Nian” and “Ming Dynasty.”

A rising star among the country’s movie studios, Xiangshan Global Studios has become a solid runner-up to “Chinawood” Hengdian World Studios and is playing a leading role in a new round of movie production.

Currently, costume detective drama “The Golden Hairpin,” starring Kris Wu and Andy Yang, is being produced there, and Xiangshan has become a de facto favorite for directors of ancient costume drama.

Lu Jiana, director of a biopic about Tang Dynasty (AD 618-907) poet and philosopher Liu Yuxi (AD 772–842), said Xiangshan has the incomparable natural scenery that most other studios don’t have.

In his opinion, the most important factor in choosing a studio is that the scenery and story complement each other.

“The studio is surrounded by mountains on three sides, which is especially suitable for shooting some large-scale ancient costume plays. Some scenes with sky, clouds and mountains as the background cannot be achieved by technology alone,” Lu said.

Cao Dun, director of “The Longest Day in Chang’an,” agrees.

As China’s equivalent to American action drama “24,” “The Longest Day in Chang’an” is about a convicted agent and his boss working together to frustrate a rebellion in capital Chang’an in 8th century China.

The drama series premiered on Youku last June, and Cao made the series in Xiangshan mainly due to the natural environment around the studio.

Xiangshan studio is constantly upgrading its infrastructure. It not only built a Tang Dynasty Chang’an but also a Song Dynasty (960-1279) garden for the production of “Royal Nirvana.”

Covering more than 3 hectares and with a total investment of 10 million yuan (US$1.44 million), the “ancient garden” further enhances Xiangshan studio’s appeal to producers of ancient costume drama.

Apart from “The Golden Hairpin,” the studio is where more than a dozen movies and TV series are being produced and with more on the list.

Xiangshan studio lowered its prices last year, including for studio rent and accommodation.

“The costs can be saved and used in production, making the productions more excellent,” said Steve Chen, chairman of the Ningbo Screen Industrial Park Committee.

He said more studios had been built for military, legal and modern shows.

A theme park based on 2018 Chinese war movie “Operation Red Sea” is under construction and more such facilities are planned. Tourists can even participate in the shooting of a real movie in the near future, according to Chen.

Chen also plans a lottery in Shanghai with 1,000 winners invited to a free tour. 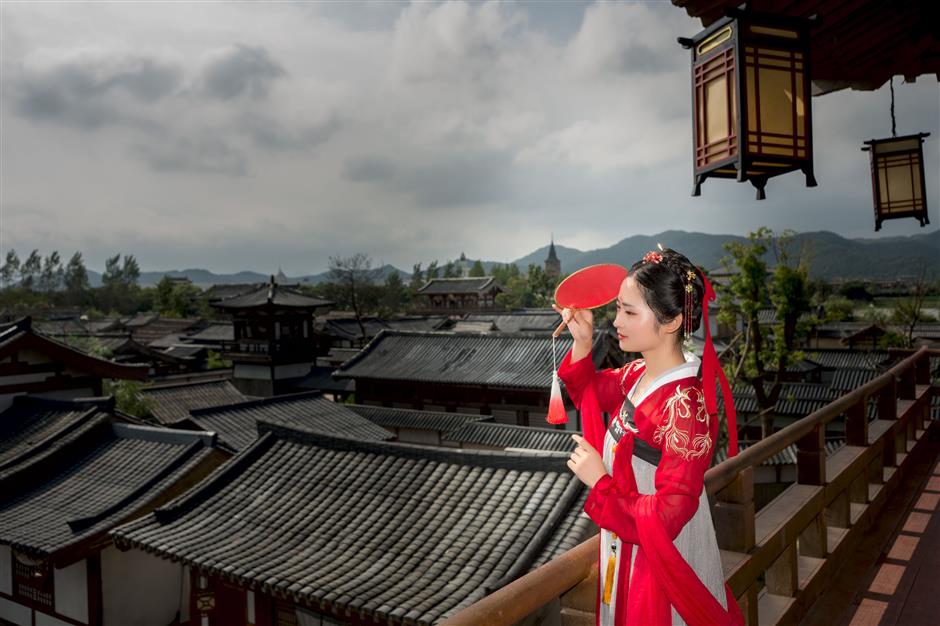 Xiangshan Global Studios’ achievements are boosting the development of tourism, a pillar of the local economy.

On the East China Sea and at the south end of the Yangtze River Delta, Xiangshan, a county of Ningbo City, is famous for its picturesque views. Between mountains and waters, Xiangshan has the natural gifts with which to develop tourism and associated businesses.

Earlier last year, the Zhejiang Coastal Expressway opened to traffic. The expressway along the coastline of Ningbo, Taizhou and Wenzhou makes Xiangshan one of the best holiday destinations in the Yangtze River Delta, according to Luo Laixin, publicity director of Xiangshan. 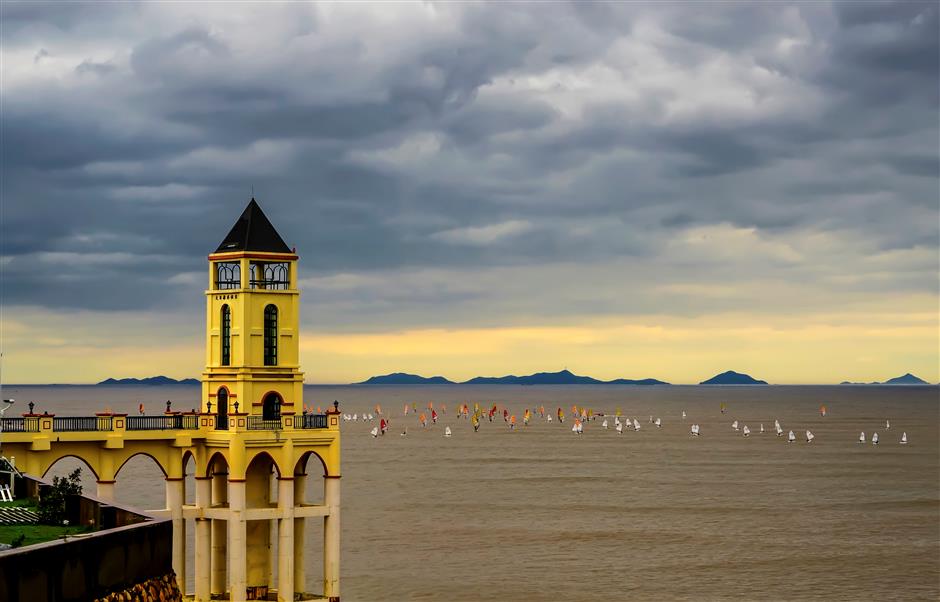 Sailboats with colorful canvases sail off the coast of Xiangshan.

At the same time, a tourist distribution and information center, a charter bus terminal and footpaths throughout Xiangshan County have been established, Luo added.

Xiangshan has mapped out a plan to build itself into a tourism complex with industrial cultivation connected to tourism, infrastructure construction matched with tourism, and urban and rural development adapted to tourism, Luo said.

Implanting tourism genes is the way for Xiangshan to promote harmonious coexistence of urban and rural construction and tourism development.

The plan gives full play to the integration of tourism with agriculture and fisheries, culture, movies and television, sports and other industries, he said.

A Xiangshan Tour website (www.xstourcn.com) featuring online booking has been established while government agencies have joined in to launch tourism products with different themes, such as the Asian Games, health care, team building, culture and parenting.

Xiangshan is where the sailing and beach volleyball for the Hangzhou 2022 Asian Games will be held.

It also made its own “Hi Xiangshan” brand for tourism promotion with resorts and hotels on beaches, sanatoriums close to Xiangshan harbor, the old town of Shipu and the Xiangshan Global Studios as four major highlights. 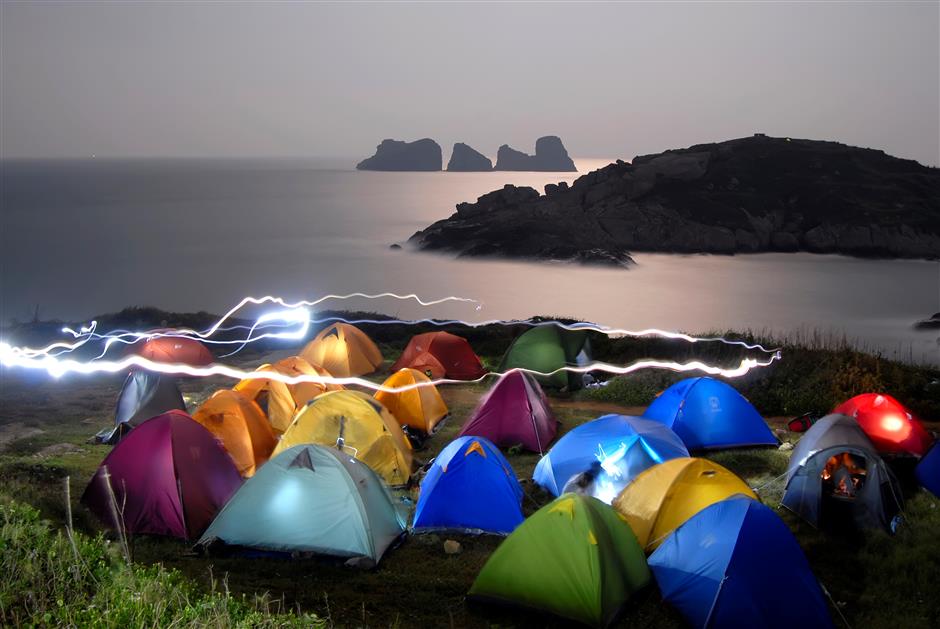 People camp at a clearing at the coast of Xiangshan.

Xiangshan has issued incentives to buoy up the tourism market. “Through livestreams, we recommend scenic spots, hotels and accommodation as a whole, and give free travel products so as to enhance the overall popularity of Xiangshan tourism,” said Yuan Mingquan, director of the Xiangshan Tourism Development Committee.

In Xiangshan, rural tourism is a profitable business. The county has more than 900 homestays, more than 60 percent of the total number in Ningbo, and over 10,000 rural tourism practitioners, according to Yuan.

In Xilifang Village, a homestay is being built in an abandoned rice milling plant. Through the introduction of homestay projects, the village can achieve much-needed income.

“The old houses and ancient buildings, many of which were abandoned, have gradually become a ‘fragrant pastry.’ With more and more tourists every day, we can see the development potential of our village,” said Fang Yuexing, Party secretary of the village.

It has invested 9.5 million yuan in the repair and renovation of ancient buildings and turned the village shrine into a cultural auditorium with a tourist service desk, a living room, an exhibition room and a training room, and let the shrine become a spiritual home for villagers and visitors.

A stone hall in the village has become a rural revitalization studio, providing think tank support for the deep activation of the ancient village established in the early Ming Dynasty (1368-1644).

The oldest and most characteristic folk house in the village has been turned into an art museum in November 2017. It not only retains the ancient village style, but also enhances the cultural and creative atmosphere. Redevelopment of old buildings is not the only business in the village, since villagers are trying their best to beautify their courtyards.

Bonsai is becoming a cash cow for villagers, Bao said, as the village plans to build a bonsai public trading center to display and sell bonsai and spread bonsai culture.

Culture and tourism are not the only assets in the area.

The LNG vessel is expected to be delivered to its owner this year. The company has a plan to build 100 high-quality and high value-added small and medium-sized chemical ships in the next decade, according to Liu Wenzhong, Xinle’s general manager.

“As a private enterprise, we are wondering whether we can make breakthroughs in the construction of high-quality chemical ships in China in areas where we can do our best,” Liu said.

From a small shipyard to the construction of a 25,000-ton bulk carrier, to the precise positioning of high-quality chemical carriers, the development track of Xinle shipbuilding is characteristic of local entrepreneurs’ diligence and long-term vision.

A shipyard owned by Zhejiang Xinle Shipbuilding Co sits along the coast of Xiangshan.