'Blessed land' beckons with pagodas and its own 'great wall'

The city of Changshu in neighboring Jiangsu Province is often called “a blessed piece of land.” Nowadays, the blessing of modern high-speed transport makes it easier to visit and an ideal day trip.

Changshu, a small county-level city under the administration of Suzhou, is a cradle of the ancient Wu culture that has endured in the Yangtze River Delta region for thousands of years. Today, it’s a stop on the new Shanghai-Suzhou-Nantong High-Speed Railway.

So, now that you have arrived, where to go?

According to ancient records, the wall was first built more than 1,300 years ago. The cob wall was later upgraded to a brick fortification about 700 years later.

The defensive wall that once circled the city was still intact until at least the early 1900s. Subsequently, it was largely demolished due to urban redevelopment. New sections of the wall were rebuilt in 1993 and 2004. Only around 200 meters of the original wall still stands.

Visitors can climb the wall starting at Xicheng Louge, a pavilion with a history even longer than the wall itself. It is a favorite spot for flower lovers, with a chrysanthemum exhibition held there every autumn.

Climbing up from Xicheng Louge, visitors come to Fucheng Gate. It was built as a defense against Japanese pirates in the 14th century. The gate has been recently restored to its original appearance. 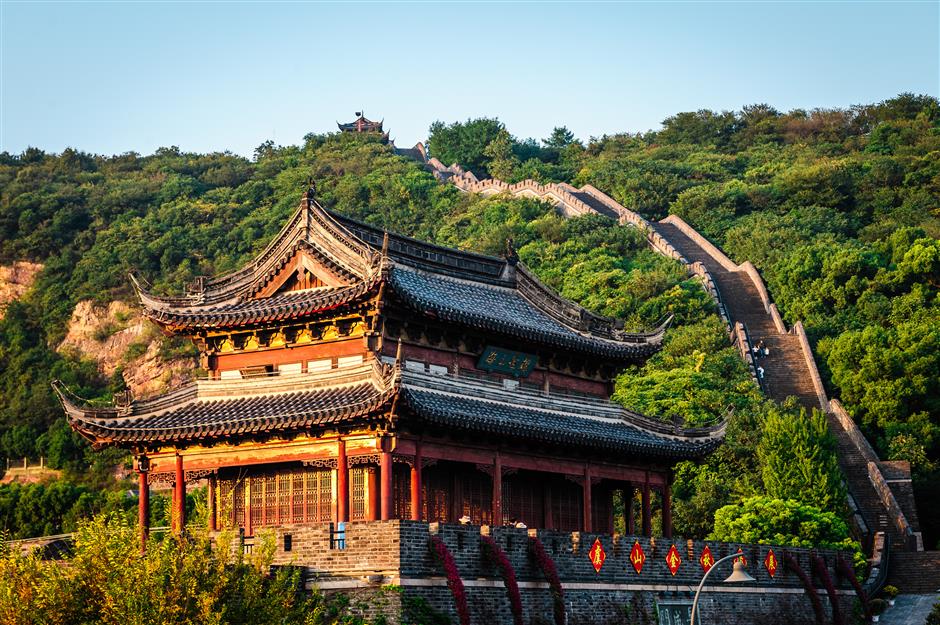 Because fu means “magnificence” in Chinese, many ancient city gates were named Fucheng. The gate in Changshu is worthy of the name. A colorfully painted tower stands tall on the gray brick gate, which is covered by thick ivy.

Looking out from the gate tower, visitors can view the city wall as it snakes along the ridge of Yushan, resembling a huge, black dragon. From the other side of the gate is a view of distant small rivers flowing through ancient towns, creating a contrast with the busy highway running through under the gate.

You can either hike on Yushan along the wall — the goal is to reach Jiange, a pavilion on the 263-meter-high main peak — or stroll around other attractions in the city.

Near Xicheng Louge is the grave of Yanzi, the only pupil of Confucius who came from south of the Yangtze.

Born in Changshu when the city was named Qinchuan, Yanzi returned to his hometown after he and other pupils compiled “The Analects of Confucius.” He spent the rest of his life disseminating his master’s thoughts and theories, laying the foundation of later Wu culture.

It is unclear when his tomb was built, although some records suggest that a descendent of Yanzi built it for him sometime in the 1st century in the Changshu area. The current memorial gates and stone steles that line the 140-meter-long path toward the grave were mostly installed in the Qing Dynasty (1644-1911).

The tomb at the end of the path doesn’t have a gravestone, but rather two lines of epigraphs carved on a stone cover. One line reads “The tomb of sage Yanzi, also known as Ziyou,” while the other is illegible. 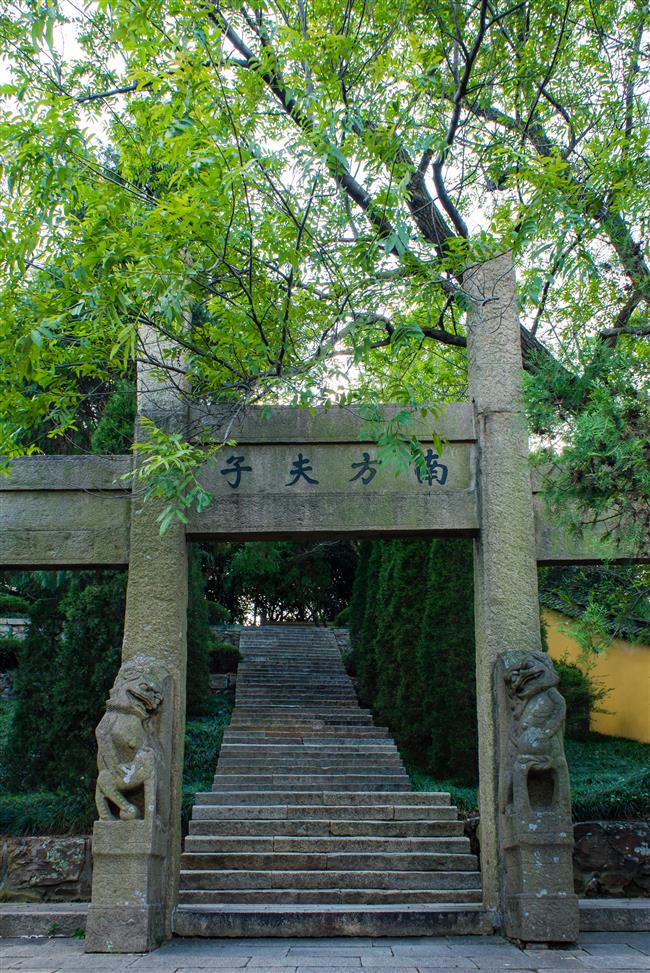 The pathway to the grave of Yanzi

If you have time to spare in the city, a visit to its old pagodas is worthwhile. Changshu locals will recommend Fangta, or Square Pagoda, and tell you how the more than 800-year-old, nine-story structure was once the highest building in the city.

Locals love the sound of wind chimes on the cornices. They will tell you that the monk who designed the pagoda never got to see it completed, dying when only the base had been constructed.

It’s said that Xingfu Temple, which houses the pagoda, was once destroyed by fire in 1860, but the pagoda miraculously survived intact. Since then the pagoda has been an auspicious symbol for locals.

Another Buddhist pagoda, the Jusha Pagoda, was not so lucky. It was built around the same time as the Square Pagoda but had to be rebuilt multiple times after destruction by floods or fires. In 1912, the top of the pagoda was felled by a typhoon, and the building was not restored after that until about three decades ago.

The temple housing the pagoda is long gone, leaving only an old gingko tree as a marker. The leaves still turn gold every fall.

Visitors can still view the base of the pagoda, which is in the shape of a throne for the Buddha. That makes it unique among all Buddhist pagodas found in China.

Before leaving Changshu, be sure to try some of the local specialties. The cuisine there is similar to that of Suzhou, but there are still dishes of local individuality.

One is jiaohuaji, or beggar’s chicken. The dish is widely known in China as a Hangzhou specialty, but somehow Changshu, which is even farther from Hangzhou than Suzhou, is regarded as the true birthplace of the dish.

The story goes that a beggar got hold of a chicken but had no cooking utensils. So he wrapped the chicken in lotus leaves and mud before roasting it. The chicken tasted especially good because the flavor of the lotus leaves seeped into the meat. Maybe the beggar later went to Hangzhou and settled there.

Tasty as the chicken is, the favorite food of Changshu locals is xunyou noodle soup, which is made from wild mushrooms that grow on pine trees on Yushan Mountain. After stir-frying the mushrooms in heavy oil, the fungus tastes like very tender meat. The broth is made from braised pork knuckle, fish and various spices, perfectly complementing the mushrooms.

It is believed that xunyou noodle soup originated with monks at Xingfu Temple, and even today, you can still get a bowl there. But of course, the broth is lighter because no meat is used in its making, according to Buddhist vegetarianism. 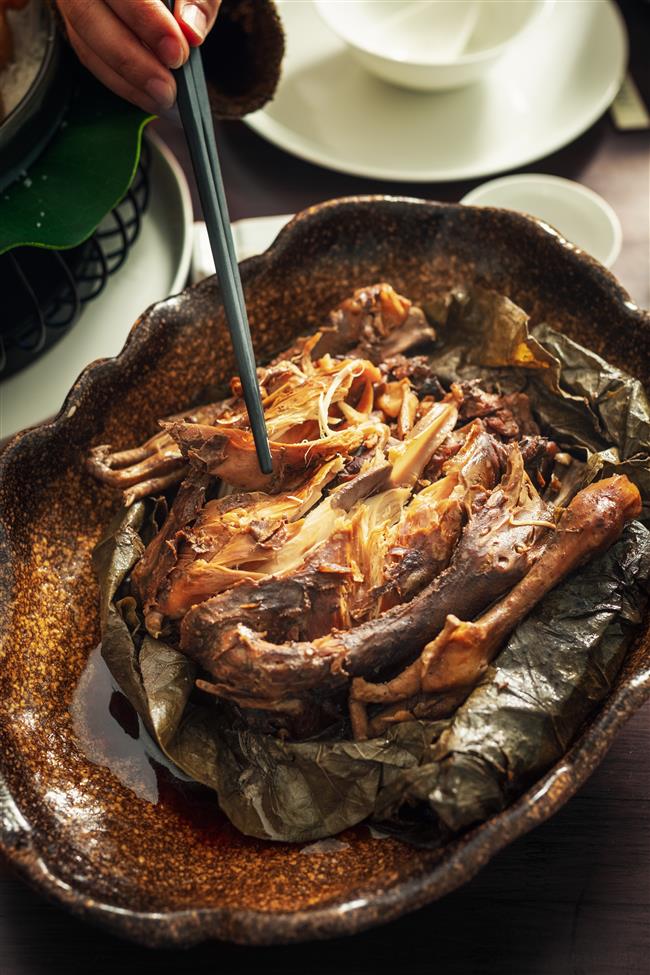 Beggar’s chicken originated in Changshu but became famous in Hangzhou.

Special Reports
ADVERTISEMENT
61906
,
'Blessed land' beckons with pagodas and its own 'great wall'
Idyllic retreats away from the concrete jungle
Little-visited, centuries-old nook manages to retain a certain charm
Hangzhou's free tea a cool idea for summer
Changbin Market: a place for more than just food
Hangzhou attractions make latest 4A list
Taiwan's 'Little Shanghai' revives thanks to surging tourists
Back to the past in Cangcheng with its old residences and bridges
Raise a glass to a lady who knows her beer
Look familiar? A town on the Yangtze that has hints of Shanghai
EXPLORE SHINE