'Mother River' beckons you to her shores

The concept of “staycations” has caught on amid the global coronavirus pandemic. In short, it means sightseeing close to home instead of hopping on a plane or train to venture afar.

Shanghai certainly has no shortage of interesting places to see when taking time off. What better place to start than at Shanghai’s star attraction — the Huangpu River, called the “Mother River of Shanghai.”

Its riverbanks, both east and west, now have long walkways, allowing people to poke into corners of the city that are lesser known.

SmartSteps, a tracking database developed by telecommunications giant Chinese Unicom, shows riverbank areas that are favored by locals and areas favored by visitors. Let’s walk or perhaps bicycle along their footsteps.

No prizes for guessing that Huangpu Park, stretches of the Bund and Lujiazui Binjiang Park where the Oriental Pearl Tower is located are the most popular riverside spots for visitors coming to Shanghai. However, SmartSteps finds that visitors’ recommended sightseeing sites are branching further afield in recent years.

Qiantan Leisure Park on the east bank is one example. The typical weekend picnic site is attracting increasing volumes of visitors since it opened four years ago. Perhaps that’s due to its proximity to Lujiazui, the financial district of Shanghai, and its vantage point for watching ships navigate along the Huangpu.

The park is generally quiet. No need to worry about crowds. This vast green sea amid skyscrapers is as large as nearly 38 soccer fields. Recently added night fairs and outdoor movies give visitors more reasons to spend time there.

If you walk along the riverbank passageway northward from Lujiazui, you reach the Shipyard (Chuanchang) Binjiang Greenery Area, another new favorite on visitors’ lists. Perhaps they just wander off from Oriental Pearl Tower and find this gem by serendipity. It’s certainly not usually mentioned in any promotional material for one-day tours in Shanghai. 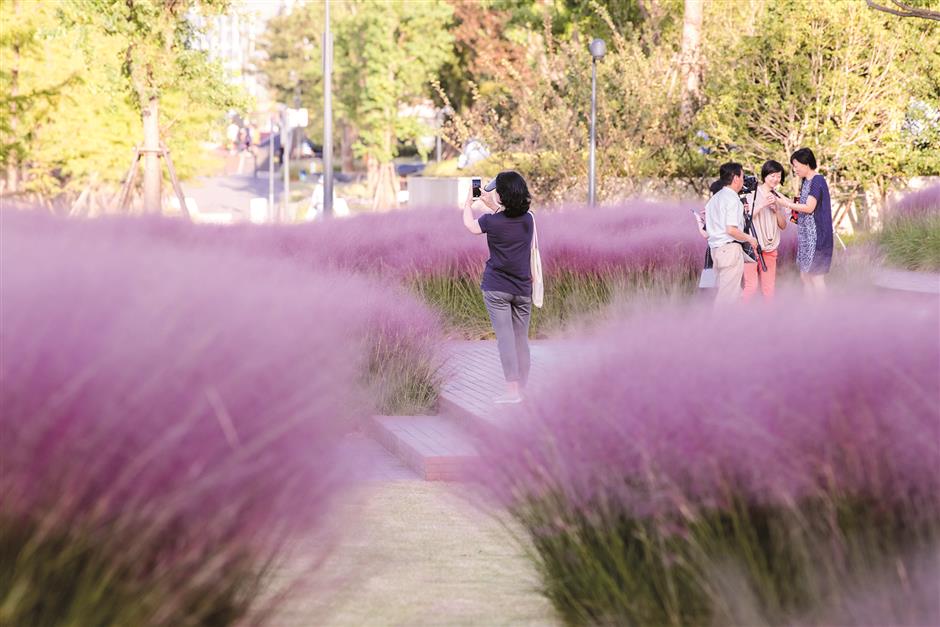 The park was developed on the site of a British-owned shipyard built in 1862. Part of the old plant facilities, such as bollards, crane runways and docks, have been retained to reflect historical perspective. One of the old buildings there was renovated into MIFA 1862, a museum and theater designed by Japanese architect Kengo Kuma.

The Shipyard Binjiang Greenery Area
Address: near the crossroads of Binjiang Avenue and Pudong Road S. 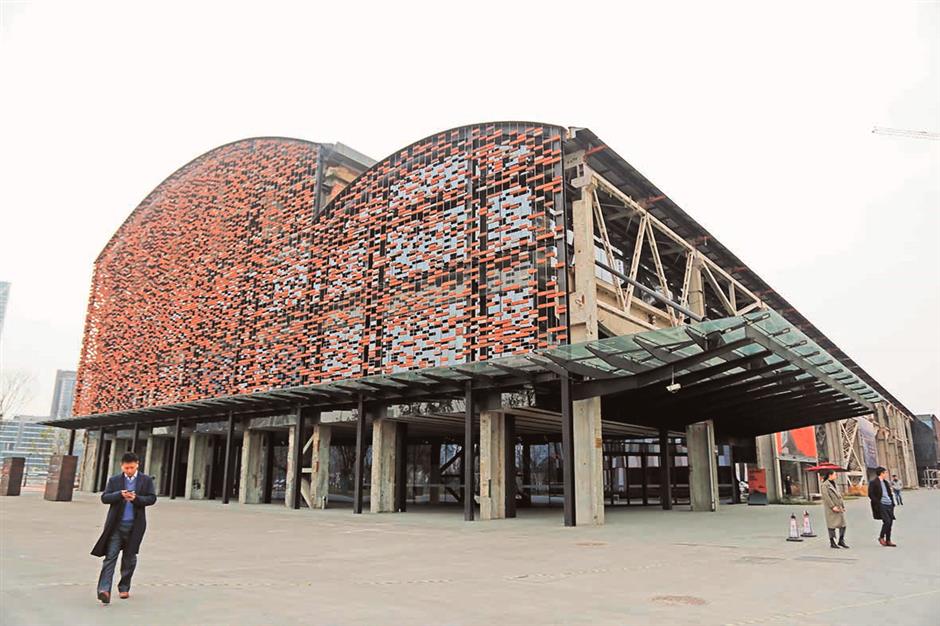 Riverside parks nearest home are the favorite of Shanghai residents. These are parks usually within walking distance from residential complexes and friendly to children and pets.

The Laobaidu Binjiang Greenery Area is a good example. Near the relatively upmarket Shimao Riviera Garden and the older Weifang New Residential Complex, this area is the “backyard garden” for hundreds of thousands of people.

Also developed on the site of an old industrial installation, this area is a popular place for after-dinner walks. In one corner of the site is the Modern Art Museum of Shanghai, a popular weekend venue for residents to view avant-garde artworks.

The museum was renovated from an old coal bunker. The current exhibition, running through the end of the month, focuses on American fashion designer Anna Sui.

Riding a bicycle along a river is always enjoyable, especially now that paved lanes are available. It’s a pity that the cycling route doesn’t currently run through the entire riverbank area, but there are still enough bike paths to work up a sweat.

One recommended route stretches for about 1.8 kilometers from the Nanyuan Binjiang Greenery Area to Xuhui Binjiang Park. You pass the popular Binjiang Skateboard Park on the way.

Nanyuan is a place seldom mentioned in tour guides, but it actually has many old stories to tell.

In 1923, the site was purchased by immigrants from the southeastern province of Fujian. They built a fellowship hall, a high school, a small cemetery, several factories and later a dock for ship cargo.

Some remnants of that past remained when the area was turned into a park decades later. Now you can still see a huge steel frame and three cement silos, which have been melded into the green landscape like post-modern sculptures. 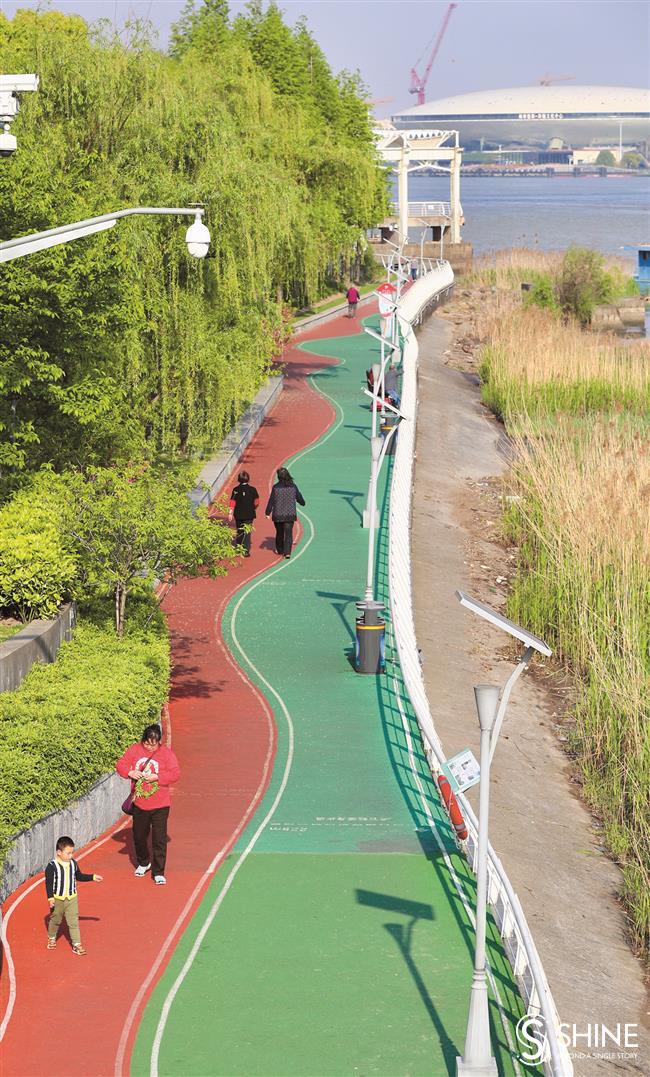 Not far from your cycling starting point, you’ll pass an exhibition hall called “Dialogue in the Dark.” The exhibition is aimed at increasing public awareness about the plight of blind people.

Visually impaired guides take visitors in groups of eight through a dark zone filled with experiences like a busy street, a market and a café. They are told to use their other senses to adjust to the surrounding environments.

At the end of the cycling route, a vast cleared area is an idyllic picnic spot — except perhaps on a scorching summer day. There used to be a formal campground called CAMP3399 that provided food and supplies there, but it was closed last year.

However, people’s passion for camping out hasn’t dimmed. You can still see tents erected in the clearing, with happy children running around.