A salon to promote tourism in Suzhou was held last weekend in Shanghai with the participation of dozens of expats interested in the scenic city.

From local food, exquisite gardens and time-honored handcrafts to the landscape of everyday local life, participants from abroad were fond of what they saw at the former studio of the late artist Chen Yifei in Tian Zi Fang.

A tourist attraction with strong artistic atmosphere, the previous stone-gate residential compound in Huangpu District is an ideal location for the salon to convey the concept that Suzhou tourism is closely integrated with the culture of Suzhou, which was established around 2,500 years ago.

Hosted by the Suzhou Bureau of Culture, Radio, Television and Tourism and co-organized by TripAdvisor, the salon on Sunday afternoon was part of Suzhou’s efforts to go global and bring to the rest of the world an amazing city featuring both old and new, and with the most authentic Chinese elements. 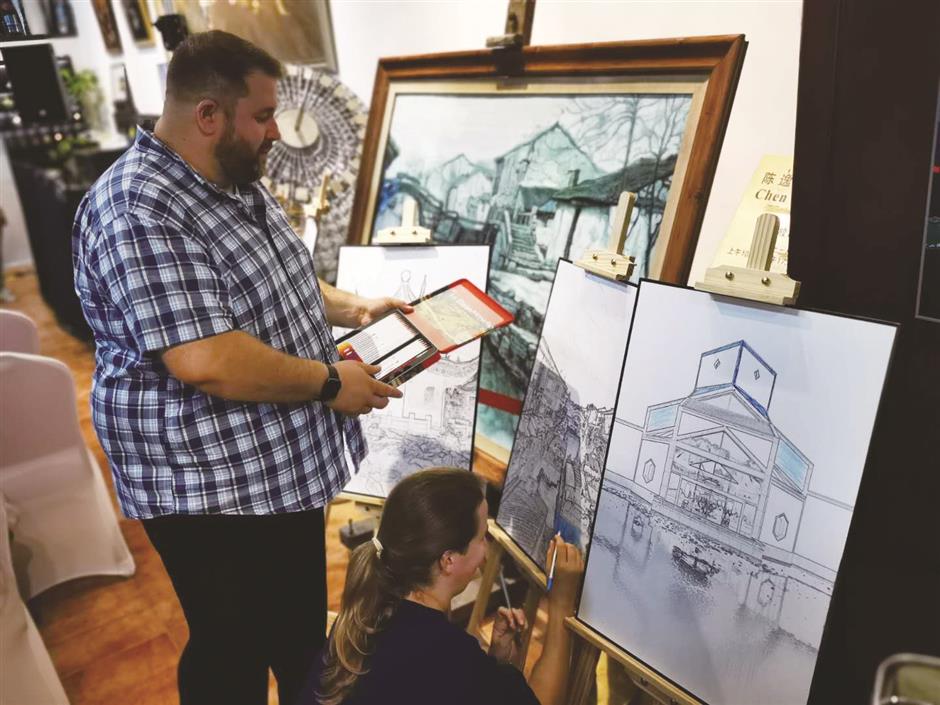 Expats try to make a painting of Suzhou and learn to play guqin, a plucked seven-string Chinese instrument, during a tourism promotion salon held in Shanghai over the weekend. The event aims to bring to the rest of the world an amazing city featuring both old and new, and with the most authentic Chinese elements. 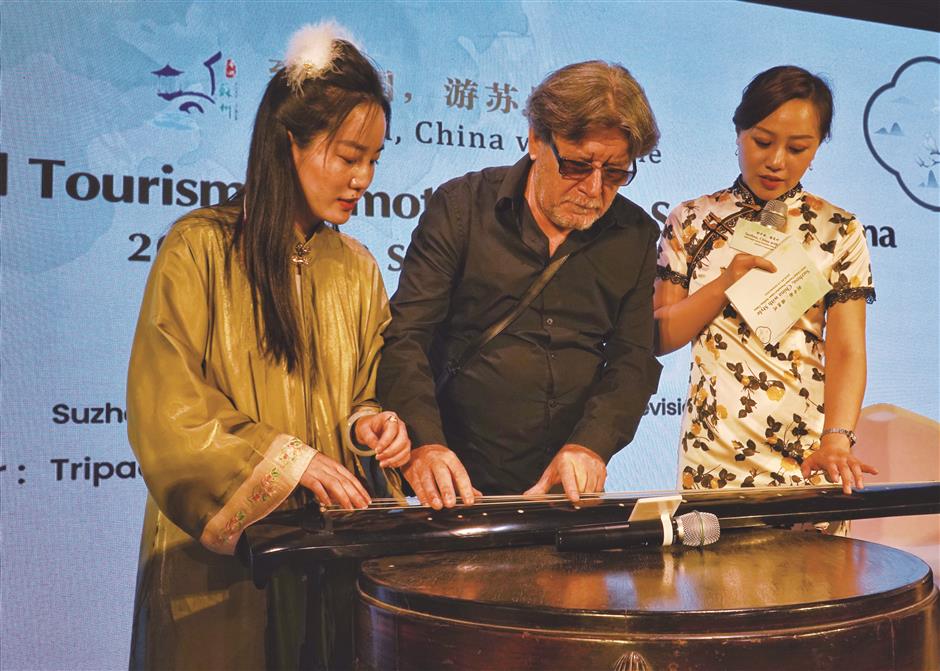 Wang Rudong, director of international communication and cooperation department of the bureau, told Shanghai Daily that Suzhou is like one of its most famous handcraft, double-sided embroidery.

“On one hand are an extremely long history and profound traditional culture, the tangible and intangible heritage, the exquisite gardens, the Suzhou section of the Grand Canal, the Kunqu Opera, Xiangshan School craftsmen and the beautiful Taihu Lake, Yangcheng Lake and Tiger Hill.

“On the other hand is a modern city with a strong economy and quite a number of multinational conglomerates. The Suzhou Industrial Park and Jinji Lake are landmarks of the modern side,” Wang said.

“Our tourism promotion in the rest of the year will mainly focus on expats, and is likely to extend to more countries next year, depending on the pandemic situation.

“Hence, we set up cooperation with major international platforms, such as TripAdvisor and Shanghai Daily, to expand our influence and let more and more people around the world fall in love with the city.”

Among foreign participants of the salon, Jalila Clarke, a kindergarten teacher from Miami, Florida, said that she didn’t realize there are so many gardens in Suzhou. She’s also eager to learn more about this “Venice of the East” as she’s visited Venice in Italy.

﻿
Special Reports
﻿
61863
,
61872
,
Three villas: a tale of wartime skullduggery
Writers and artists of the past lend old lane a rich history
First bloom signals late start to osmanthus season
Time well spent: The revitalization of a Bund icon
Our prehistoric predecessors: They fascinate us, they scare us
'Red' tourism and culture travel activities abound in Jinhua Week
Near neighbors: The rich history and close residents of Ci'anli Building
Ningbo is becoming a new summer hotspot for tourism
Hangzhou's most popular 'red' tourism sites
Timber temple evokes debate over origins of its architectural style
EXPLORE SHINE