As watertowns go, a genuine gem sits in 'backyard of Shanghai'

Taicang, administered by Suzhou in Jiangsu Province, is often called a “backyard of Shanghai,” but it has never traditionally been a popular sightseeing destination. Its major claim to fame is production of high-quality dried meat floss.

Maybe because it has been largely forgotten by commercial developers, towns in Taicang — so close to one of China’s biggest metropolises — have managed somewhat miraculously to retain appearances that are decades or even a century old.

Shaxi Ancient Town in Taicang was praised as the “No. 1 town” in the lower reaches of the Yangtze River in its heyday. Now, with other ancient towns being commercially exploited, the 1,300-year-old town more or less maintains its original look and tranquility.

In some sense, it is perhaps the nearest place for Shanghai people to experience an authentic Chinese ancient town.

It’s built along a long, narrow creek called Qiputang. Even during holidays, the main street is never crowded. You can actually hear your own steps along its flagstone lanes.

Along the town’s 1.5-kilometer Old Street, you can see an authentic Yangtze River Delta watertown, unembellished for tourists. There are no newly brushed houses, no bridges built of cleanly cut marble or wood pillars looking like they were painted yesterday.

The only scenic spot in the town that charges an entry fee is a museum dedicated to local history and culture. 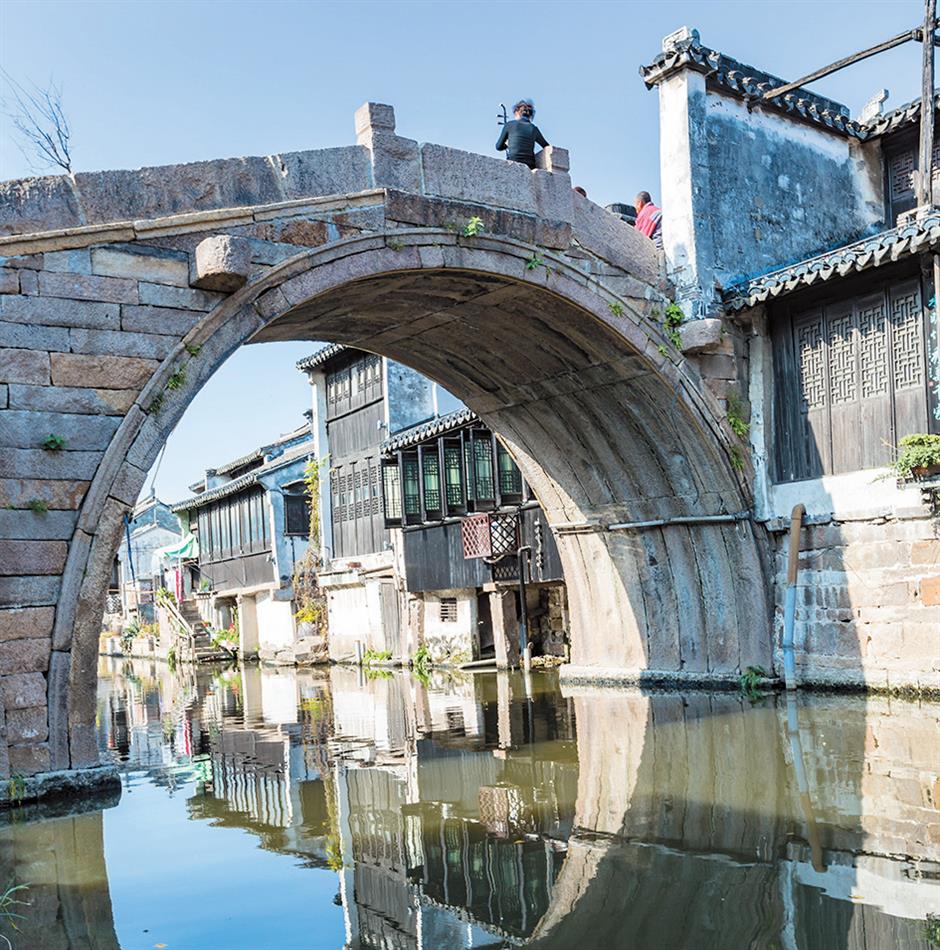 Bridges in Shaxi Town date back hundreds of years.

An ancient poem describing the Shaxi Town of yesteryear still holds true today: “The lane is merely as broad as a man’s shoulders; every house has beautifully carved beams. On your doorstep are bridges and flowing boats.”

The ancient prosperity of Shaxi was about 100 years ago. At that time, boats lined up on Qiputang to go under the bridges, and the streets were always busy with all kinds of businesses.

Shaxi is also home to many celebrities. Leyin Garden, the oldest in the town, was built by a hermit named Qu Xiaozhen during the late Yuan Dynasty (1271-1368). The current garden was rebuilt in the 1980s, when there was only a pond of the original one remaining.

Lu was close to Du Yuesheng, a mafia leader known to everyone in Shanghai. The residence he built after returning to Shaxi in 1946 was then probably the most luxurious in the town. Now it has been modified into a small museum that displays the ancient daily necessities of local people.

With its local celebrities and busy commerce gone, Shaxi reverted to almost a forgotten name on the map. It retains the charm of black roof tiles, moss on the flagstones and ivy covering the bridges. 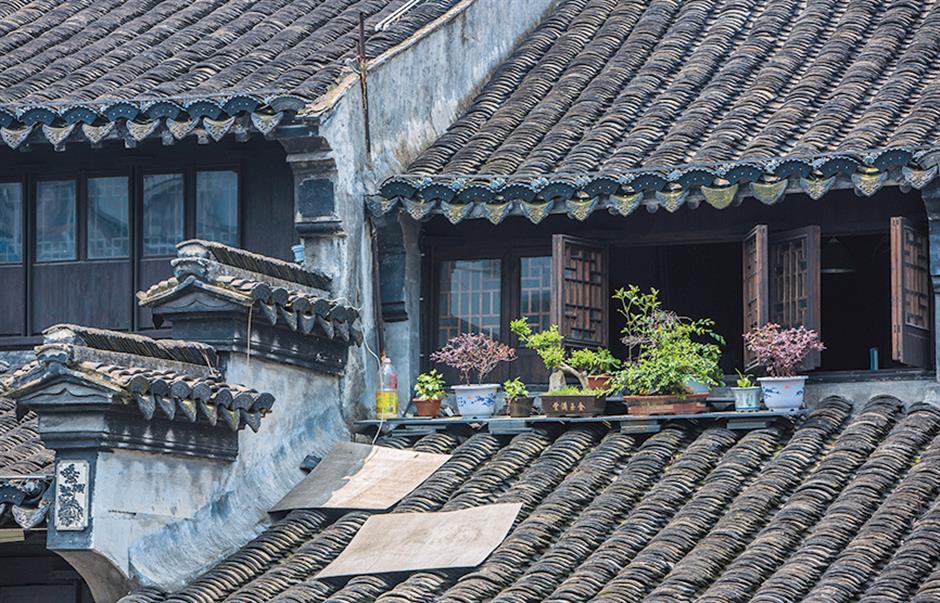 Most houses in Shaxi haven’t changed their appearance since they were built.

The town might look weathered, but people living there remain vibrant.

They operate small businesses that have been passed down for generations — making rice cakes, weaving straw or serving beef noodle soup in local eateries.

Walking through the “shoulder-width” lanes, you come to a manor that is a treasure of the town. A stone tablet reads “Gong’s Carved Halls.”

Boasting a history of more than 400 years, the manor was founded by a local businessman, but even the descendants of the Gong family don’t know the name of the first owner. In fact, the current residents aren’t related to the original family.

Rumor has it that most Gong descendants have moved abroad, but some people say there are still some in China, who have made achievements in fields such as music and astronomy.

If you are lucky, the current residents of the manor might agree to show you around — for a tip, of course. They will tell you that the manor was much larger than what is left today. It originally had seven jin, or “ring” of houses, including main halls and wings on both sides. Today, only three are left.

Fortunately, “carved halls” officially named Chengde Hall and Jingzhaoyu Hall, are well preserved. Their wood beams and columns bear carvings of auspicious animals that were expected to bless the manor.

The animals are portrayed very vividly. The carvings of cranes, a symbol of longevity, are a good example. Some stand elegantly, some are about to fly and some seem to be dancing while flapping their wings.

Various carving techniques used on them have drawn much attention from architectural and historical experts.

“Professors visit here from time to time,” said one resident.

The halls were recently repaired, but the backyard garden behind them remains more or less like it always was. It is in a small, delicate design, and is now sadly in need of some trimming and weeding. But maybe it’s that overgrown image that gives the garden a sense of time-honored beauty.

The residents say that in the near future, the whole town may undergo a thorough renovation to turn it into a tourist destination. For purists, it will be a sad day when ticket windows, gate machines and “please don’t” signs appear. 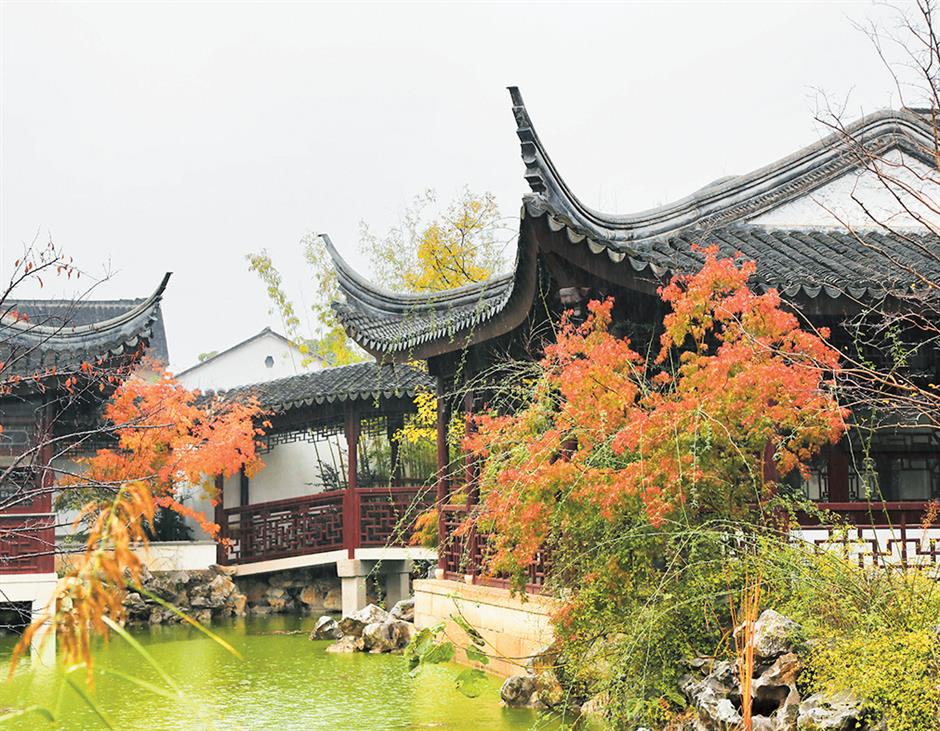