'Tis the season to venture out and relish 'the year's last, loveliest smile'

After a sweltering Shanghai summer, autumn comes as such a welcome relief, its brisk breezes and colorful foliage providing a glorious season just before winter sets in.

Even better in this year of the coronavirus pandemic, infections are controlled and we can all get out to enjoy the season where leaves crunch underfoot.

As Canadian author Lucy Maud Montgomery (1874-1942) succinctly put it: “I’m so glad I live in a world where there are Octobers.”

This city has any number of places where an autumn walk will fill you with the joy of nature’s palette. Here are a few suggestions of places where you can enjoy what American poet and journalist William Cullen Bryant (1794-1878) called “the year’s last, loveliest smile.”

This garden, more than 500 years old, is probably the best place in Shanghai to view maple leaves in all their glory.

The garden was originally three separate gardens, each with a different owner.

After restoration, the gardens have been merged into one.

Ancient maple trees are planted in almost every corner of the garden. Every year in late autumn, gold, bright yellow and crimson leaves intermingle under the blue sky, creating a scene out of a painting. 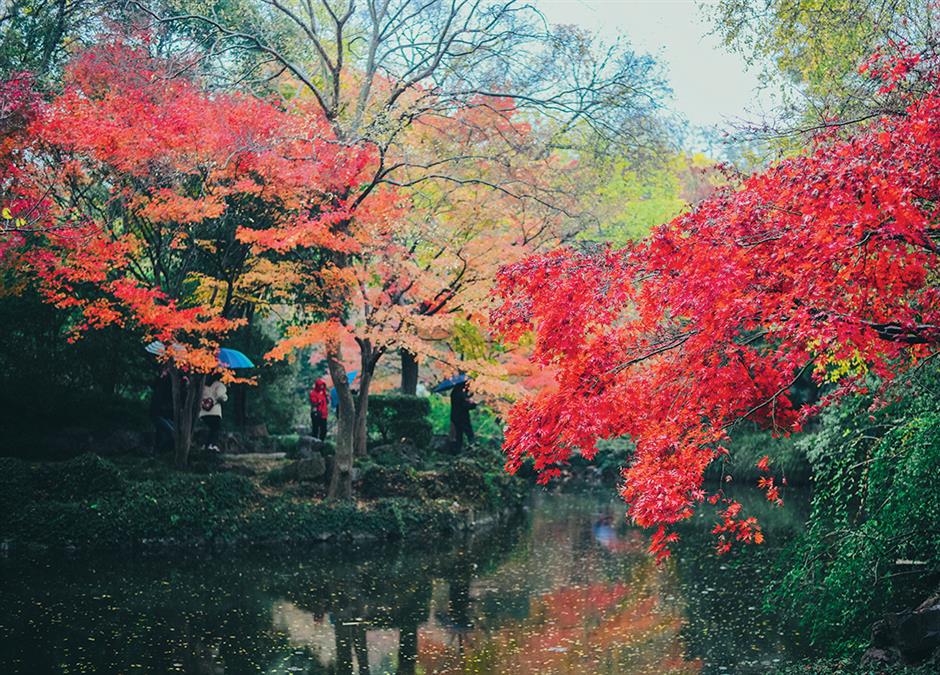 In other seasons, Qiuxiapu doesn’t feel much different from other ancient Chinese gardens to common visitors. But landscape professionals always marvel at its layout. In summer, the garden looks delicate and tranquil, with cool, dark corners.

Autumn changes the whole scene. Walking around the garden, you pass ponds and pavilions. The scenery changes from angle to angle. That’s why the garden is such a favorite of photographers.

And perhaps best of all, the garden never draws the big crowds of other Shanghai gardens. So you can take a leisure stroll and easily get lost in your thoughts.

Best viewing time: late November to early December
Address: 314 Dongdajie St, Jiading District
If you go: The nearest Metro station is Jiadingbei Station on Line 11. It’s best to take a taxi to the garden from there.

This park, featuring a large wetland, doesn’t feel like Shanghai at all. It has the only “forest on water” in the city.

Hundreds of dawn redwoods grow in the shallow waters. When the leaves turn red and the weather allows, you can see the sunshine bouncing off the bright leaves, with rays of light passing through gaps between trees.

Dawn redwoods are deciduous conifers with a unique China history.

In 1941, while studying leaf fossils, Shigeru Miki from Kyoto University identified a new tree genus, which he named Metasequoia, meaning “like a sequoia.”

That same year, forestry professor Kan Duo at the National Central University in Chongqing observed an enormous living specimen at a village shrine while performing a survey in Sichuan and Hubei provinces. He was unaware of Miki’s new genus and, though he collected some plant specimens, he never published his findings.

It wasn’t until 1946 that Chinese professors Zheng Wanjun and Hu Xiansu made the pivotal connection between Miki’s fossil genus and the living samples.

Since its emergence from “extinction,” the dawn redwood has become something of a national point of pride in China. It is protected under Chinese law, and its cultivation has spread to other countries. 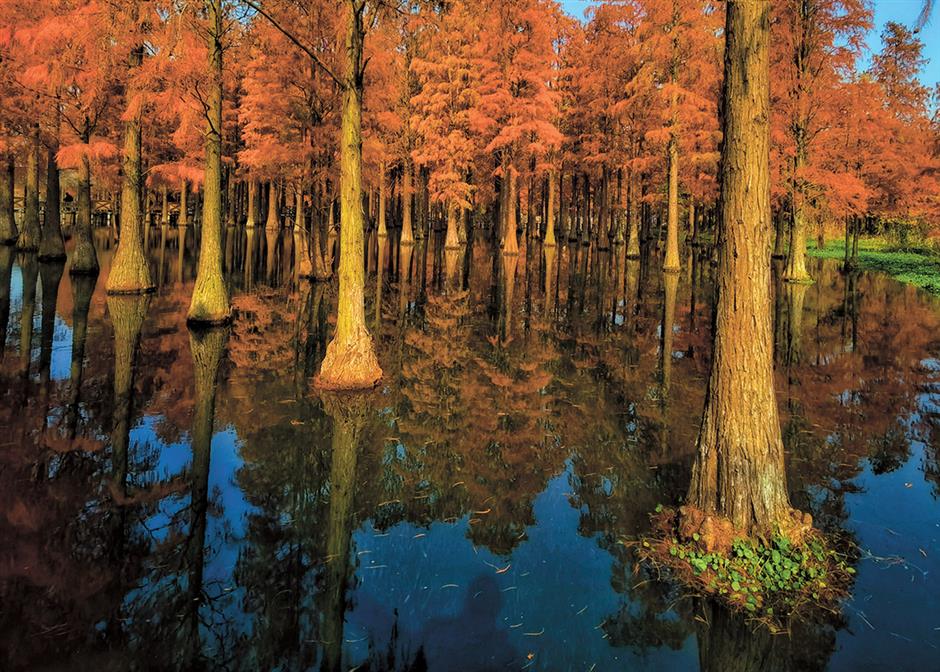 Dawn redwood trees have a history as colorful as their leaves.

The area is about a half hour’s walk from the village of Zhushe. Well worth the effort.

The walk goes past a vast golden wheat field, waiting to be harvested, and clear ponds full of lotus leaves.

At the end of the walk, you can see the dawn redwood forest on the opposite side of the lake, with the waterfront encircled with pinkish reeds. Their reflection upon the water caps a perfect excursion.

You don’t need to take a long Metro ride or drive all the way to the suburbs to take in the best of autumn. There are plenty of downtown parks where foliage viewing is equally rewarding.

Century Park is one example. There you can see kochia burning bushes, or fireweed.

The plant gets its name from the fact that it turns a flaming red wine color in the autumn.

This time of year, the ornamental plant resembles giant, fluffy red balls squeezed together on the ground.

In spring and summer, the bushes are like small cacti with soft thorns.

A main passageway in the park, stretching for around 1 kilometer, is decorated by gingko trees. Seeing golden gingko leaves shimmering under a bright blue autumn sky is a great way to lift your spirits.

Last but not least, Shanghai streets flanked by plane trees are an autumn delight. In Xuhui and Huangpu districts, Sinan, Fuxing and Wukang roads are among the streets where the display of yellow leaves is especially stunning.

Several years ago, the fallen leaves were swept away as part of the campaign to keep the city clean. But nowadays, the leaves are left where they fall, creating a golden blanket that crunches underfoot. Children love it — and so do many adults. 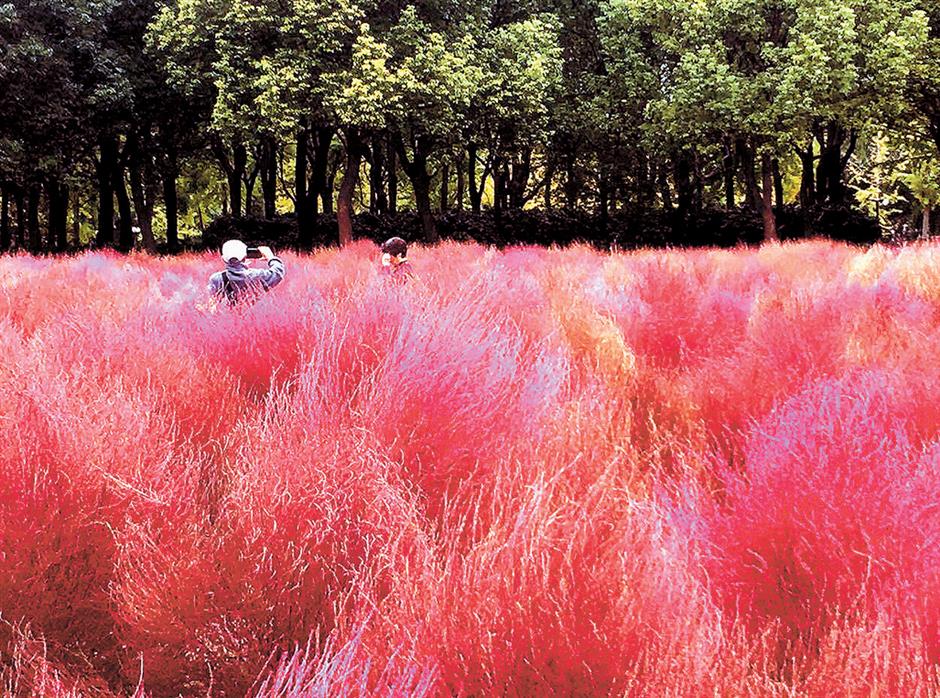 ﻿
Special Reports
ADVERTISEMENT
Let an umbrella be your smile! A town with plenty to be happy about
Rainbow colors among sports park's green
What's on in Songjiang District in January
Western-style villas from a bygone era in Shanghai
Yuhang policy bears fruit in tea culture
An ancient king who carried cultural secrets to the grave
Old train stops at Dongxia to recall the good old days
As tourist stops go, one village is a different kettle of fish
Sanya a tropical paradise packed with scenic delights
Suzhou: an autumn paradise 'where dreams come true'
EXPLORE SHINE