Old mansion's delicate woodcarving exemplifies the passing of an era

Ten minutes’ ride from the Metro station of Songjiang Xincheng, Zhongshan Road W. in Songjiang District seems a world apart from its suburban surroundings. The short trip on a wide street with modern neighborhoods gives way to a narrow one-way road flanked by old houses.

My destination is the Du’s Residence, one of a few houses in the area open to the public. Most of the others remain behind locked gates, awaiting restoration.

I have come here to view what are considered some of the most delicate mansion woodcarvings in the city and get a sense of a century-old era.

Like all traditional Chinese-style residences, Du’s comprises a ring of structures. The first two rings, or jin in Chinese, were built between 1796 and 1820; the third and fourth were added early in the last century, after the Qing Dynasty (1644-1911) collapsed. 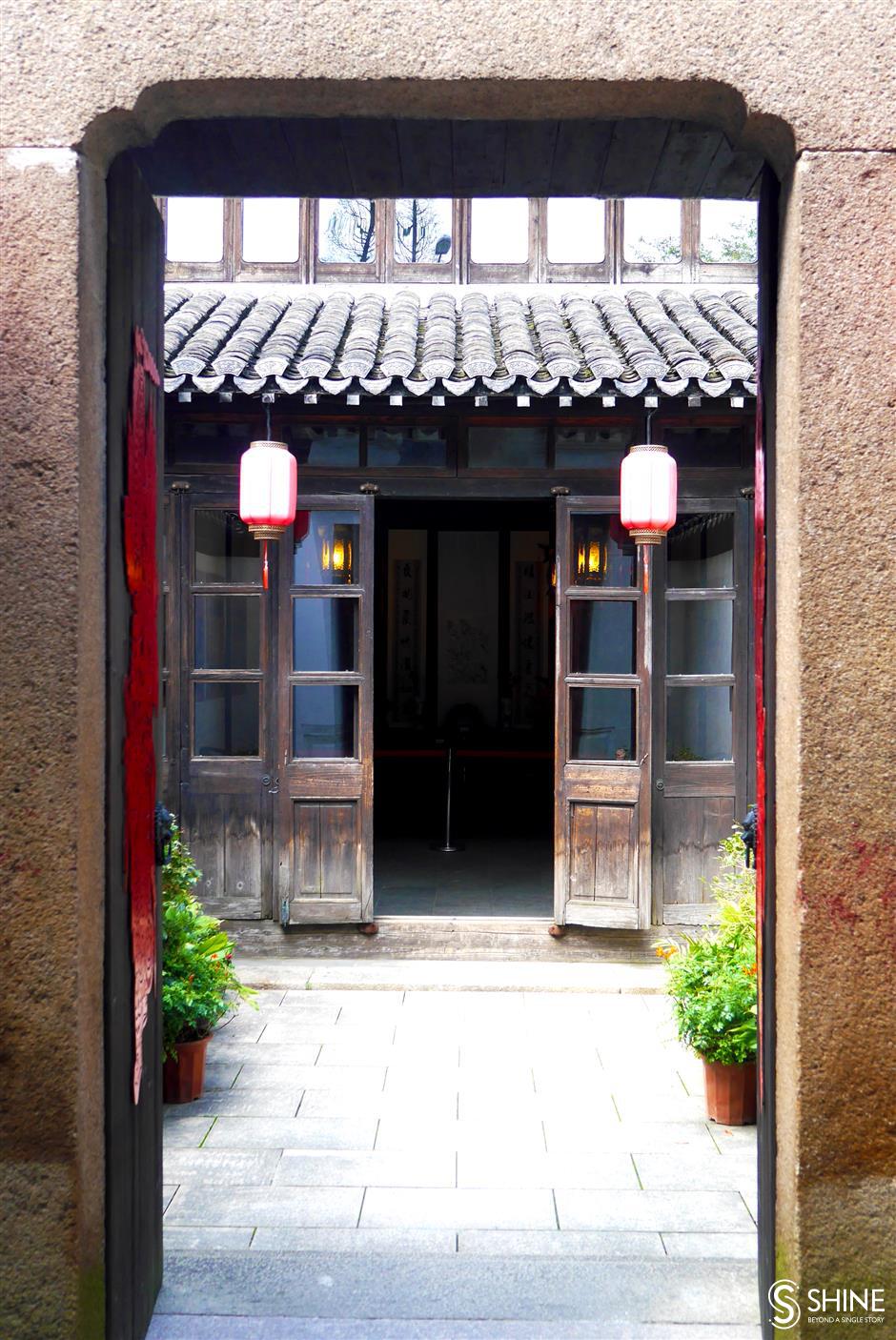 The entrance of Du's residence

Reconstruction on part of the residence was initiated by then-owner Du Lingmei as a wedding gift for his daughter.

In old China, married daughters were considered “spilled water.” If a family had sons, it was very difficult for married daughters to inherit any familial properties. The Du family apparently broke with tradition.

There are scant written records about Du Lingmei, except that he was a rich local businessman. His daughter Du Yiqing was said to have been a Songjiang District governor during the Republic of China (1912-1949) era.

No details about the family lifestyle are available, but the gable walls of the residence speak volumes of its lavishness. Four-layer gable walls are rarely seen elsewhere. 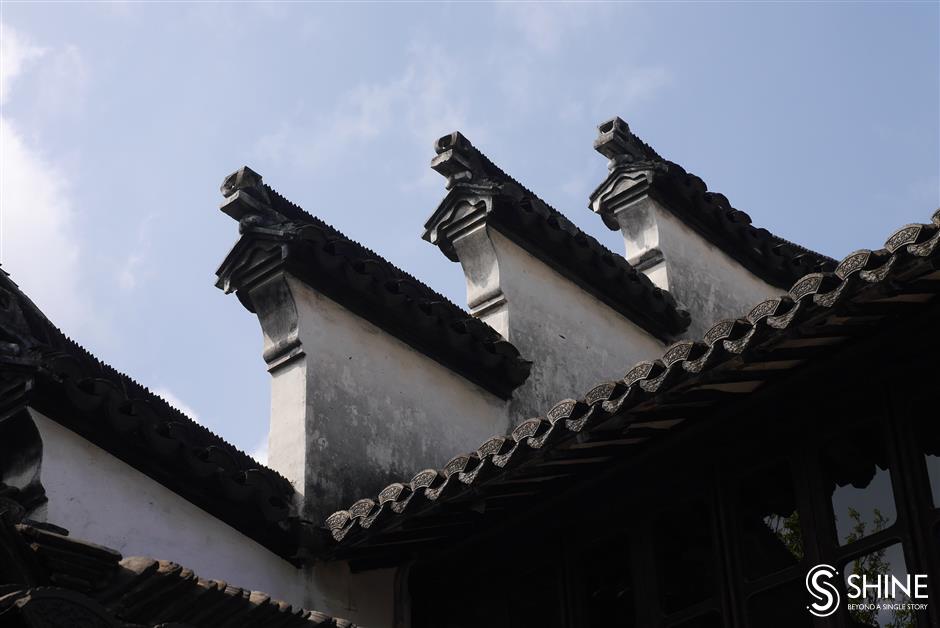 The four-layer gable wall shows the power and wealth of the Du family.

The woodcarvings that attracted my visit are in the third ring of houses, where Du Yiqing lived after her marriage.

I notice a very Western-style iron bar outside the Chinese-style wooden doors and wonder if it was added to protect the doors during later restoration. The answer is no.

“It was added when Western culture started to become popular in Shanghai,” says a guide to the residence. “If you go to the second floor, which is now closed temporarily, you would also see arched windows that you often find in Western churches but never in a Chinese-style house.” 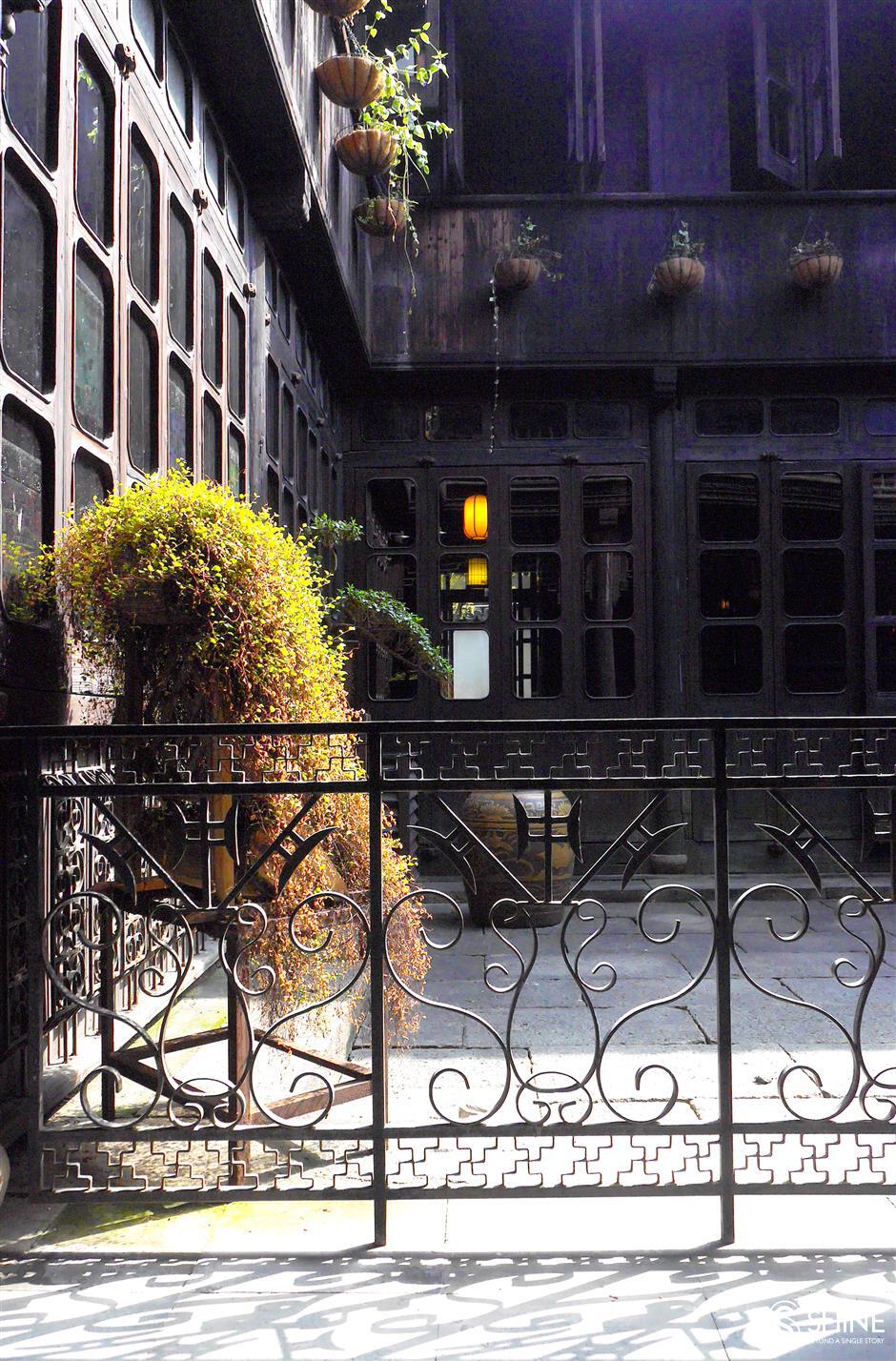 The Western-style gate melds harmoniously with the Chinese style of the Du residence. Rebuilt early in the last century, the house witnessed the passing of an era.

The guide tells me that many of the materials used to build the second jin, such as glass, were imported. Dozens of craftsmen were hired to complete the woodcarvings that cover all the beams, columns, doors and window frames.

To me, the most fascinating feature of the carvings is their metaphors used to express the owner’s wishes.

The most eye-catching carving is a pattern of two Chinese dragons and a pearl carved onto an eave. “Two dragons frolicking with a pearl” was a common décor pattern used in more ancient times but generally reserved to structures associated with emperors. Commoners who dared use dragon patterns could face the death penalty and the demise of their whole clan.

After the collapse of the Qing court, which ended dynasties in China, use of the mythical creatures by more common folk became more widespread.

The dragons on the mansion eaves are so vivid that every scale and claw are clearly delineated. 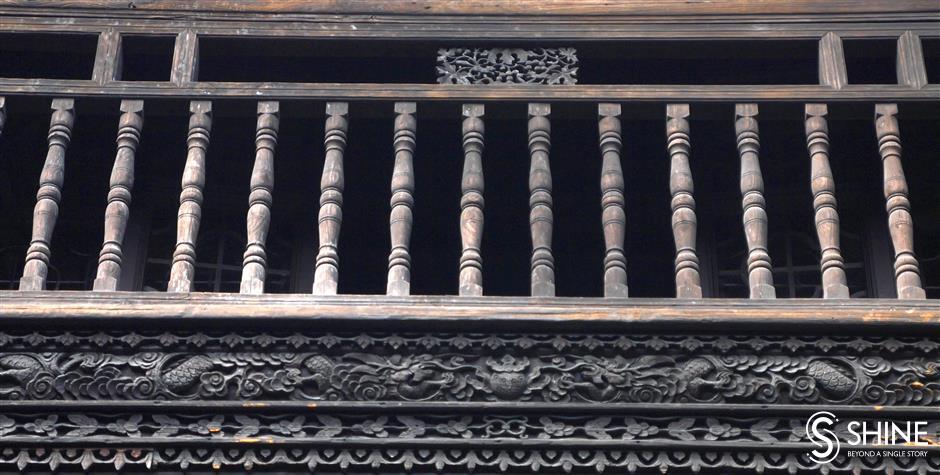 The Du’s Residence in Songjiang District features delicate woodcarvings all over the mansions, while the carving of “two dragons frolicking with a pearl” is the most eye-catching one.

Walking into the main hall of the third jin, I catch sight of a row of rafters. They are bunched up rather than being flat, resembling the top of a sedan. The guide tells me that the shape of the rafters shows the family’s wish for outstanding children because the word “sedan” sounds similar to jiaozi, or “outstanding people” in Chinese.

“The coin has a hole in the center, which is called ‘eye of the coin,’” the guide says. “And the word ‘tiger’ (hu) sounds similar to luck (fu), so that the two locks mean ‘luck (tiger) in front of your eyes.’” 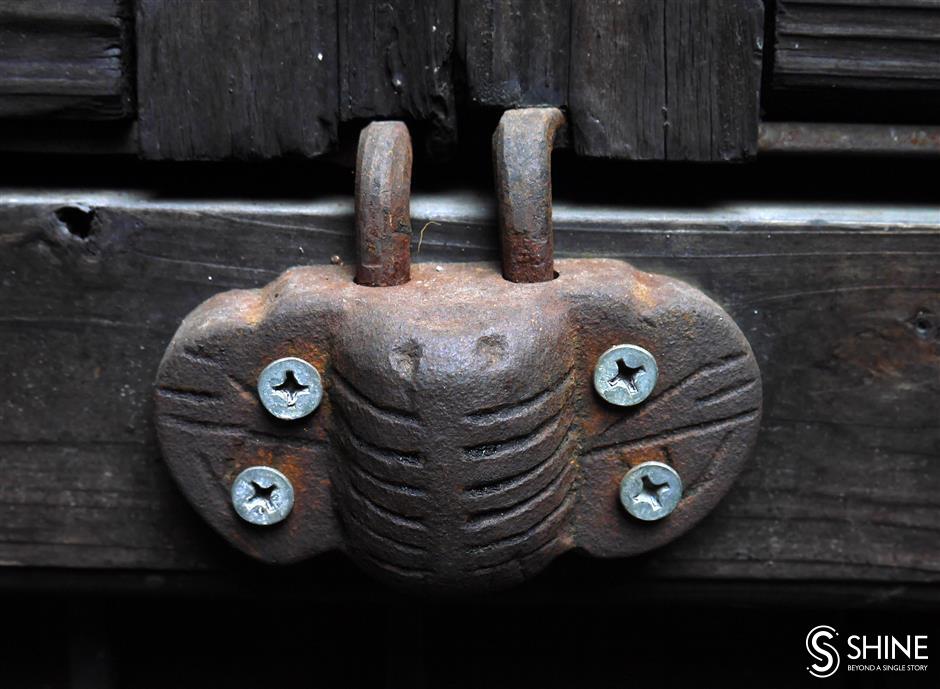 The window lock in the shape of a tiger head represents good fortune.

Meanwhile, carvings on the doors pay homage to the mythological story “Eight Immortals Crossing the Sea,” although the eight immortals don’t actually appear.

Instead, their artifacts — such as a sword, a flower basket, a flute and a lotus — are carved on the doors. The images reflect the belief that the immortals will bless the family with peace and auspiciousness.

Date fruits on a beam are probably the only ones where I can readily recognize their symbolism. They refer to zao sheng gui zi, or “to have good babies early.” Even today, dates (zao), peanuts (sheng), longans (gui) and lotus seeds (zi) are still placed in the bedroom of a newlywed couple — wishing them healthy babies.

Apart from the woodcarvings, old furniture is also featured throughout the Du house.

However, some of the rooms have been turned into exhibition halls to showcase local Songjiang traditions, such as herb medicine making and shadow plays.

That decision is open to opinion. Some people might think it’s a good way for visitors to become acquainted with older customs, but to me, the house would be better left as it was.

After renovations, more of the original homes on the road will be open to the public. But for now, seeing these exquisite woodcarvings alone is a good enough reason for a visit.

The residence is open free to the public from Tuesdays through Sundays.