Timber temple evokes debate over origins of its architectural style

Luodian in Baoshan District always seems to be just one step away from the limelight.

It is one of the oldest towns in Shanghai, but it doesn't draw many visitors, even on holidays. It has an expansive artificial lake, where a Swedish replica town sits on one bank, but the site doesn't attract the same attention as London-themed Thames Town in Songjiang District.

And Luodian also has the largest, and probably the most beautiful, Buddhist temple in Shanghai, but many locals don't even know about it.

Perhaps the temple is out of favor because so many new buildings were constructed at the site just a decade ago, diminishing its historical appeal.

However, Baoshan Temple is worth a visit, if only to view the ancient relics preserved there. 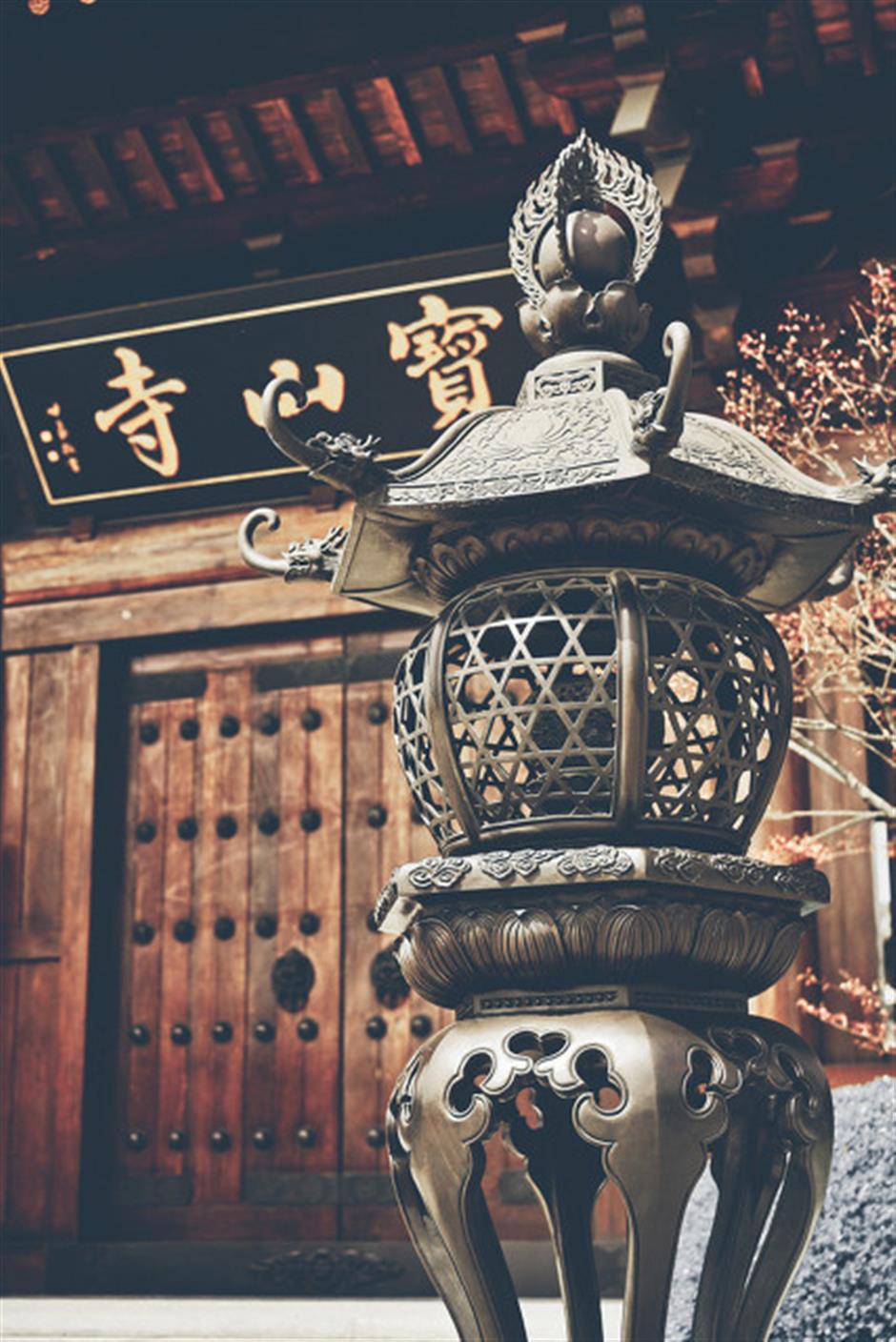 Baoshan Temple is believed to be in the style of the Tang Dynasty (AD 618-907), but some claim it resembles temple designs in Japan.

The temple itself was originally built in 1511 as a mansion for a local family surnamed Tang, who didn't leave many written records. It is known only that a descendant named Tang Yuexuan donated the mansion to be reconstructed as a temple, which came to be called Yuhuang Palace.

The temple was destroyed and rebuilt multiple times over the centuries, and was occupied by factories during the "cultural revolution" (1966-76).

In 1988, the temple resumed its original function and was renamed Fanwang Palace, then Baoshan Jing Temple, and finally Baoshan Temple.

In 2005, work on new buildings began nearby. The new temple became a treasure for fans of timber architecture. All the hundreds of halls and rooms are built with timberwork, minus the yellow or red walls so common in Chinese Buddhist temples.

All the woodwork was assembled using traditional mortise and tenon joinery. Not a single nail was used.

"There is an old saying in China that goes: 'The life of wood lasts for a thousand years,'" says head monk Shiliang. "This is how Chinese people used to build their houses, and their structures were so stable."

The construction of the new temple won the China Construction Engineering Luban Prize, the ultimate accolade of construction quality in the country. The details are beautiful to behold.

All the wood is varnished, not painted, so that its texture – down to holes on the surface – can be clearly seen. It is as if the wood is still breathing. The metal coverings on the wood are delicately carved; the hedges and trees in the temple garden are meticulously trimmed.

Although visitors might be misled into thinking this is a Japanese-style temple, the structure is actually the only Tang Dynasty-style (AD 618-907) temple in Shanghai and one of very few in China.

The style of the main hall imitates that of Foguang Temple, a surviving Tang Dynasty temple on Wutai Mountain in north China's Shanxi Province.

Foguang Temple is one of only three ancient Chinese timber constructions that have weathered centuries of disasters. Its main hall, the second-oldest surviving timber structure in China, houses Buddhist art and sculptures from the Tang Dynasty. 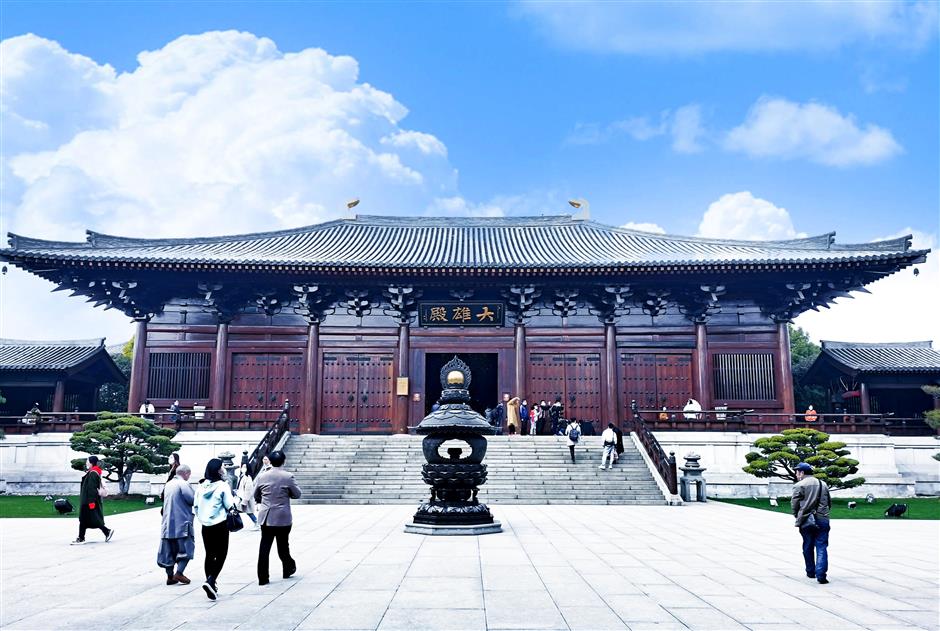 The main hall of the temple is basically a replica of that in Foguang Temple in Shanxi Province, a rare Tang Dynasty relic.

The work involves 18 individual paintings, which took Jiang five years to complete. In 2006, monk Shiliang asked Jiang for a paint for the temple, and the latter visited Wutai Mountain and Mogao and Yungang Buddhist caves to draw inspiration.

After returning from the trips, Jiang spent a year making sketches and half a year completing colored samples. Eventually, it took him another three years to complete the temple artwork, which includes 159 Buddhas, auspicious animals such as lions, tigers and peacocks, and flowers.

Although it is widely claimed that the new temple is of the late Tang Dynasty style, debate about "Tang versus Japanese" still continues online. Shortly after the construction of the temple was completed, some netizens nicknamed it "Little Kyoto" after the Japanese city famous for its ancient temples.

When photographer Lin Xu visited the temple for the first time, she didn't know anything about Tang Dynasty-style architecture, but she had been to Japan for several times.

"The temple looked nothing like any other temple that I had been to in China," she said. "Also, there is a garden where a seven-story pagoda stands. It is named Zhiyuan, which immediately reminded me of Gion in Kyoto because they share the same Chinese characters."

Gion is a geisha district in Kyoto, but the name Zhiyuan is derived from the Buddhist holy land Jetavanavihara (zhi shu ji gu du yuan in Chinese), which was frequently mentioned in scriptures. It is recorded that the Buddha lived and preached there for 25 years. 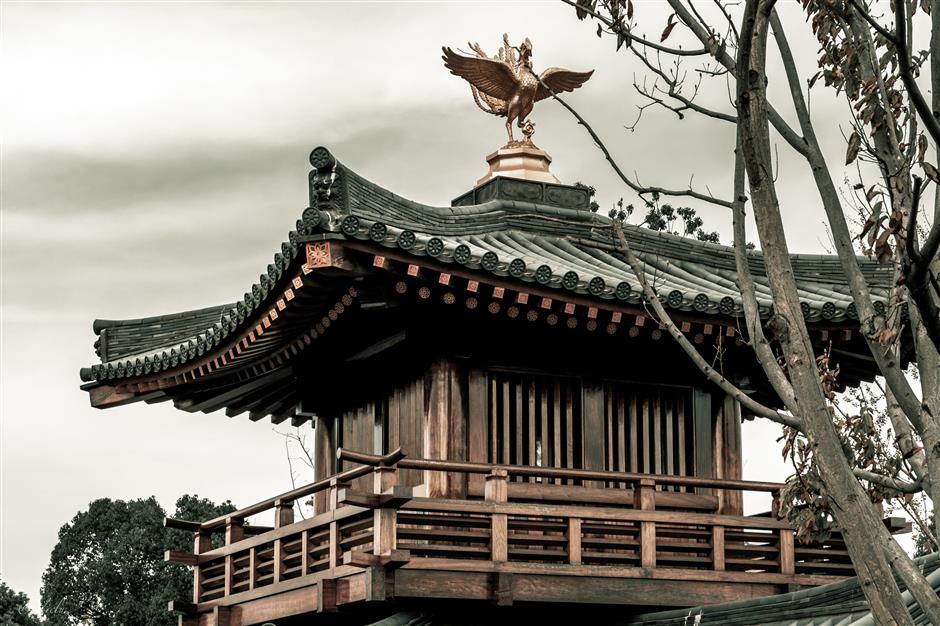 There are still "Tang versus Japanese" debates about the style of the temple buildings (above) and the Zhiyuan Garden (below) in the temple. 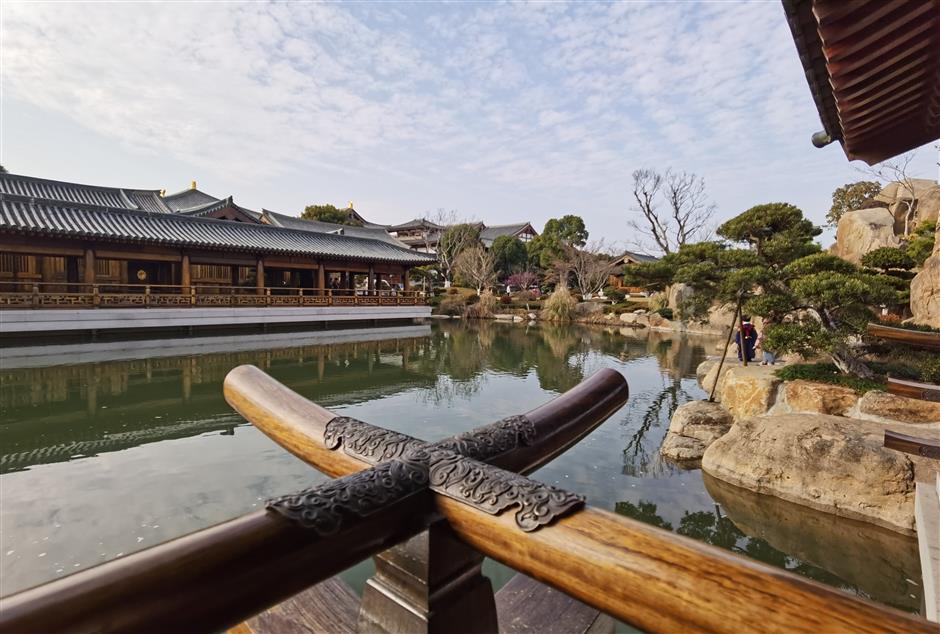 Lin said she subsequently read a lot of material on both Tang and Japanese architecture and found that details of Baoshan Temple, apart from the main hall, reflected neither.

"Maybe it is meaningless to argue whether the temple is representative of the Tang Dynasty or of the Japanese style," said Lin. "Culture is fluid, and it's natural that different cultures influence one another. And it is also natural that modern construction will be different from ancient ones."

Meanwhile, not far away from the new temple, its old buildings still stand. They are called by the old name Baoshan Jing Temple. For those interested in history, this site is probably the better destination.

Walking around the yellow walls, you come across the inscribed board of the old Fanwang Palace and stone pillars carved with dragons. Although the two main halls in the old temple underwent restoration in 2017, you can still feel the weight of time here.

Ultimately, it boils down to taste. Do you prefer the new and fancy, or the old and unadorned? 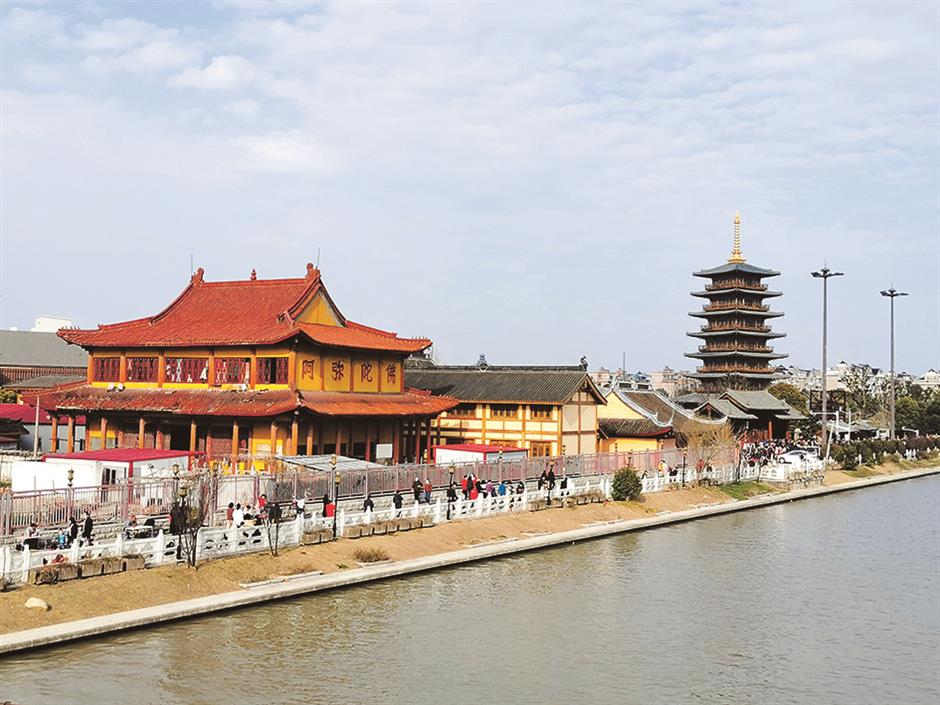 One can view both old and new temples along the Lianqi River in Luodian.

Meilan Lake Station on Metro Line 7 is the nearest station to the temple. From there, take the Baoshan No. 16 bus or call a taxi to get to the temple.

Cash is needed for the admission. There is no digital payment system. There are also no refreshment amenities around the temple, so bring your own water. However, a canteen serving vegetarian food is available.