Yuriko Tanaka, a Japanese postgraduate student studying in Hangzhou, has lived in Zhejiang Province for two years but had never visited Taizhou, a scenic city on the eastern coast.

Tanaka was part of a group of expats who toured the city recently under a program launched by Zhejiang authorities that encourages foreign residents to come and explore the culture, cuisine, scenery and folklore of a place steeped in history.

The group spent most of its time in Linhai, a county with a history of more than 1,000 years, now under the administration of Taizhou. Some of the expats visited the more ancient part of Linhai, while others headed for the countryside to pick fruit and mingle with rural life.

Tanaka said the Donghu Lake Park was her favorite stop because it typifies a traditional Chinese garden. Donghu is a man-made lake with a long history. 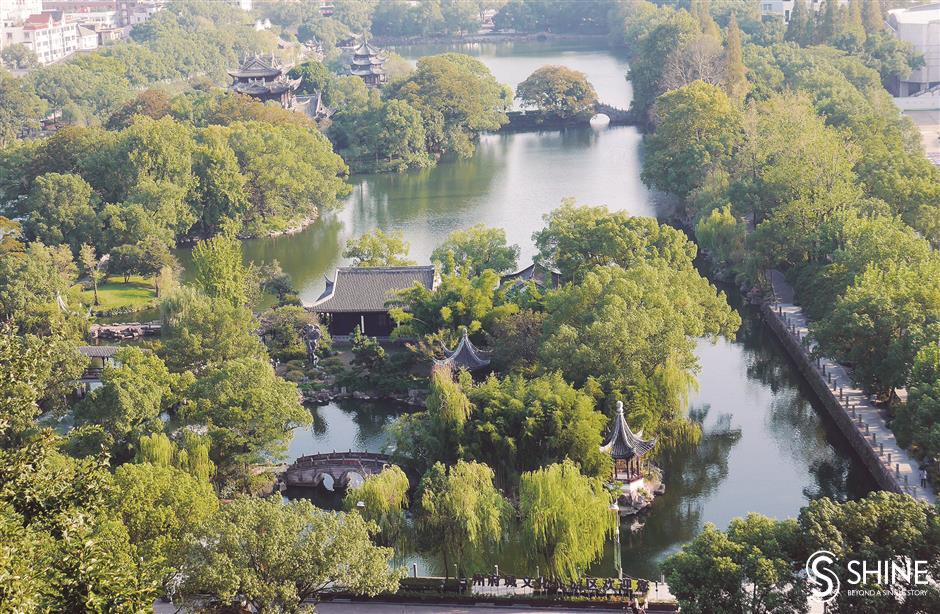 In 1071, Taizhou was hit by flooding. Residents piled up stones to try to contain the water, and dug a lake to hold it. In following centuries, trees, flowers and shrubs were planted around the lake, and pavilions and terraces were added. The site grew so beautiful that visiting scholars wrote poems about it.

The site, however, gradually fell into neglect by the end of the Ming Dynasty (1368-1644) and was not restored until decades later. Most of the existing buildings there now are the legacy of the 18th century.

"I especially loved viewing the lake from the various pavilions because the scenery changes, though it all remains beautiful," said the Zhejiang University student. "I could feel the emotions of the poets who wrote something about the lake."

The beauty of Donghu doesn't disappear when visitors leave the garden. From a tower on the adjacent ancient city wall of Linhai, visitors are treated to a breathtaking view of the lake.

First built nearly 1,800 years ago, the wall has been nicknamed "the Great Wall of southern China." It doesn't begin to compare with the Great Wall of northern China, but visitors who climb to the top are rewarded with magnificent views of the area. 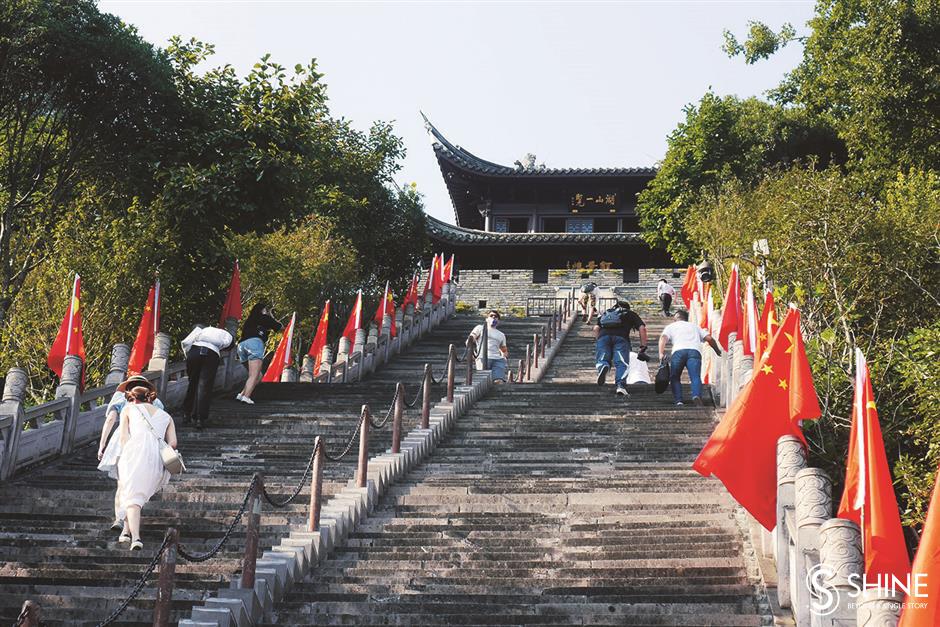 Nicknamed "Great Wall of southern China," the ancient city wall of Linhai is a local icon.

The climb is a bit arduous at first. There's a steep stairway to the first beacon tower, which is the real starting point of the wall. It's from there that you can see Donghu Lake spread below you.

The journey gets easier after that, stretching nearly 5 kilometers. You can see half of Linhai along the route.

The city wall ends at Jinshan Hill, site of a temple dating back to the Tang Dynasty (AD 618-907). There is nothing to match the view of a sunset from the hill as the fading lights cast a golden glow across the entire area.

Another of Tanaka's favorites was Ziyang Ancient Street.

"The old folk houses and the atmosphere of daily life were really fascinating," she said. "It all made me feel very relaxed."

Ziyang Old Street is famous for its traditional snacks. Instead of the standard kebabs or stinky tofu found along so many old streets in China, two snacks there are quite unique.

One is the nori pancake. The puff pastry is stuffed with sweetened ground nori, or edible seaweed. 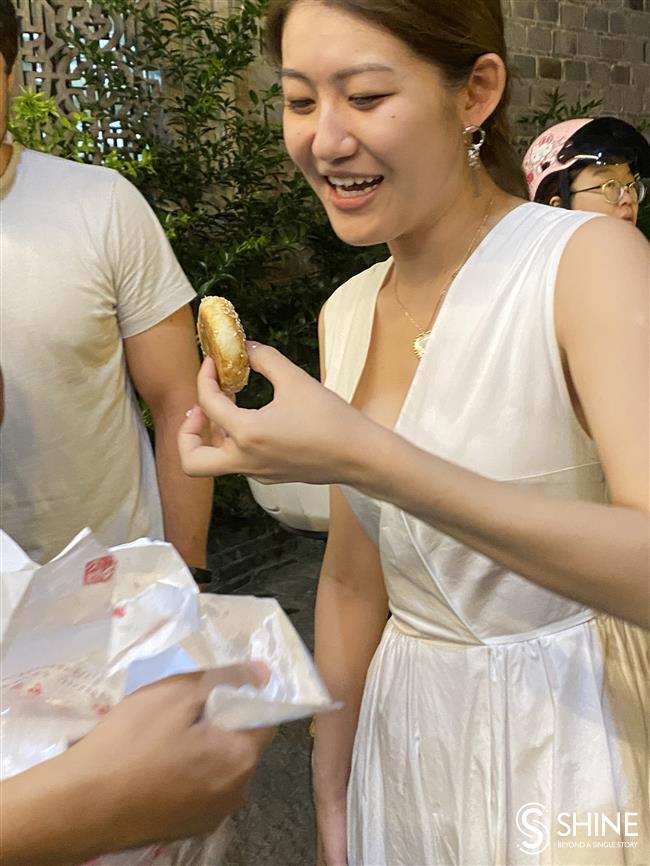 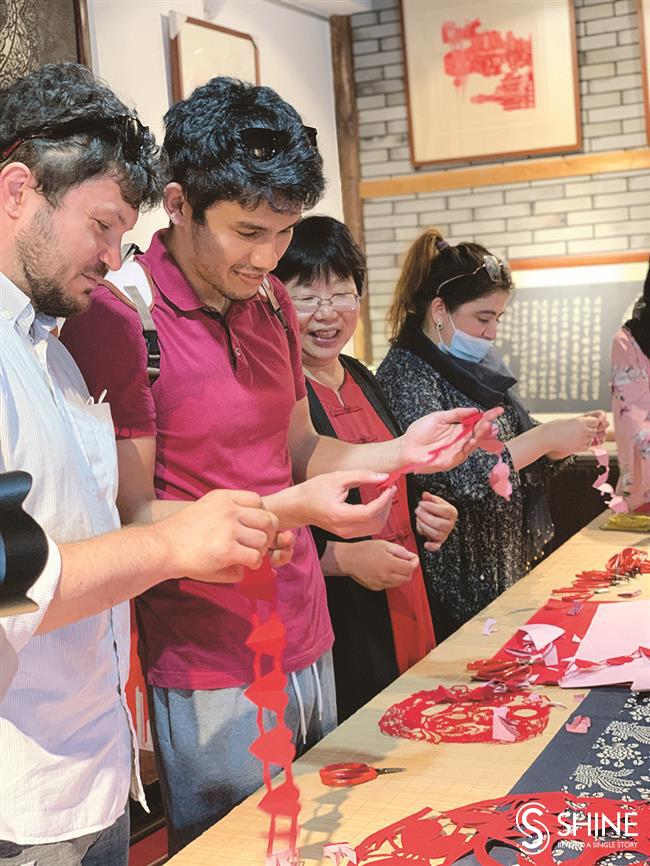 Expats were invited to experience folk culture of Taizhou.

Among several shops that sell the snack on the street, Wangtianshun Nori Pancake always attracts the most customers. Expect long queues.

Boasting a history of nearly 120 years, the snack shop is suffused with a tantalizing aroma. In its kitchens, pastry cooks produce pancake within a minute. It is believed that every day, the shop sells about 4,000 of the delicacies.

The other snack has a weird-sounding name: sheep tail with egg white, or danqingyangwei. It does have egg white in it, but there's no sheep tail. At first look, the snack resembles a golden puffball. With the first bite, you discover that the wrap is not made of conventional sticky rice or wheat dough, but rather of whipped egg white. The stuffing is sweetened bean paste.

It is believed that the name of the snack derives from its shape, though it's not clear why ancient people would equate a golden ball with the tail of the sheep.

At any rate, it has become an iconic snack of Taizhou. A café on Ziyang Old Street even turned the snack into a latte – a concoction its signboard claims was invented by the shop. Visitors are definitely recommended to give it a try. 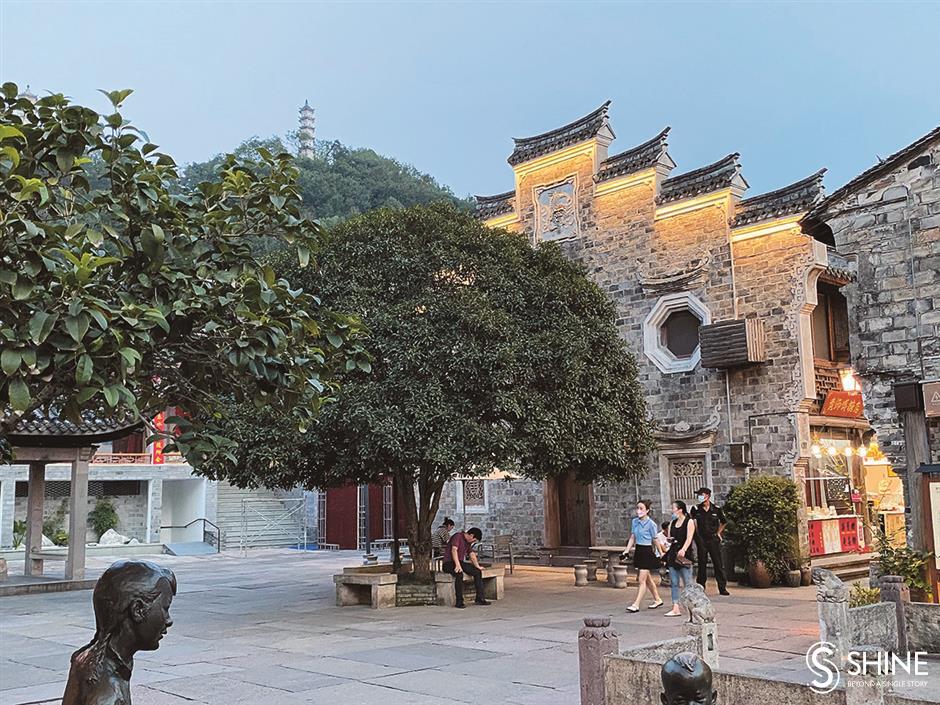 Ziyang Ancient Street with a history of more than a millennium is a night-life attraction for both locals and visitors.

Tanaka said that the two-day trip piqued her interest in Taizhou and she regretted there wasn't more time to explore the city. She has a bucket list if she returns. She said she has heard about Xiaoruo Village, where people paint their house in colorful hues, like on Burano Island in Venice. She also said she would like to visit Xianju, site of a national park where mountains, valleys, waterfalls and lakes compose a realm worthy of its name: "where immortals live."

And she probably ought to add Tiantai Mountain to the list. It's considered one of the most beautiful and culturally significant peaks in eastern China.

According to local legend, Tiantai Mountain was once located on the back of a giant sea turtle. The creator goddess Nuwa moved the mountain to its current location before using the legs of the sea turtle to prop up the heavens.

There is certainly something other-worldly about the 1,138-meter-high peak, with its nearby Guoqing Temple. The mountain is also home to the Seven Sons tree, one of the nine remaining wild populations of the rare tree.

"I love outdoor activities," Tanaka said. "I believe Taizhou have more places that would be fun to explore."