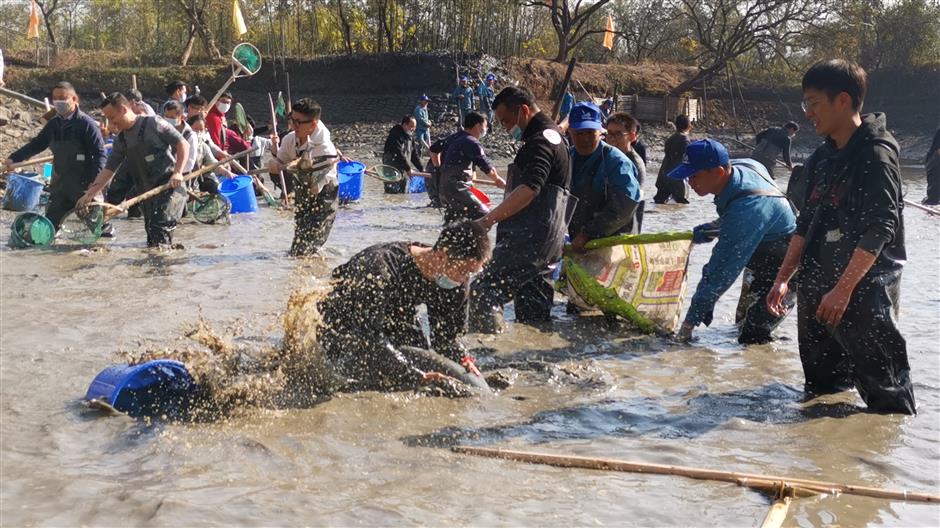 Visitors dig sludges to catch fish during the annual Dried Bogs Festival with waterproof pants and bags at Xixi Wetland in Hangzhou.

For most, a temperature drop in December is bad news, but not for the natives of Xixi Wetland. For the residents, it means only one thing – time for the annual Dried Bogs Festival that lasts through January 16 has arrived.

The wetland is dotted with over 1,000 bogs and ponds with an abundance of aquatic animals. Locals have preserved a tradition in winter – drain away water, pile up silt at the water banks and catch fish.

Cleaning up the silt is considered to provide aquatic animals with a favorable environment. The piled silt creates rich, fertile soil for mulberry, willow and persimmon trees growing on the banks. The fish are then exposed at the bottom of the dried bog. It has always been a chance for fishermen to celebrate.

At the opening ceremony on December 4, the biggest fish caught on the site weighed 34 kilograms. 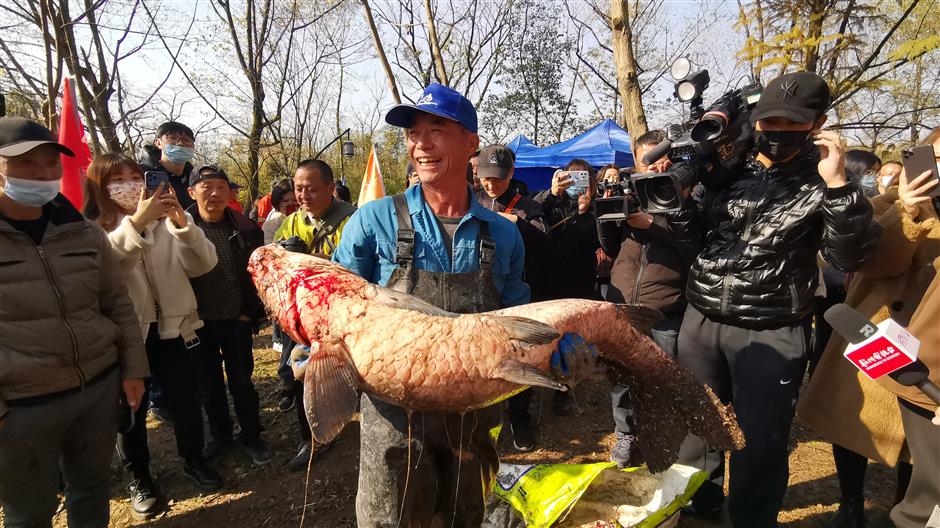 A fisherman wears a big smile after catching a fish weighing 34 kilograms at the opening ceremony of the annual Dried Bogs Festival.

Visitors can rent waterproof pants and bags used by local fishermen to have a try. If they manage to dig through the sludge for fish, they can have them cooked according to their personal tastes at local family-run restaurants.

Visitors also have the opportunity to help farmers clean the slippery silt in bogs and experience how their ancestors maintained a balanced ecological environment for centuries.

In the past, Xixi Wetland was the main source of freshwater fish in Hangzhou, accounting for 70 percent of the market supply, including black, grass, silver and bighead carps.

These carps from crisscrossed waters are fed with snails and are considered to be one of the very best varieties of dishes featuring soft meat and rich protein.

Formerly, local residents dried carp meat before Chinese Lunar New Year. However, these manual techniques have fallen out of favor in downtown areas, and people prefer fresh rather than dried ones. Through January 16, vendors will be setting up food stalls to sell their fresh catch and fish ball soup on weekends.

Gastronomes cannot miss out on the handmade fish ball soup. The dish is suitable for both children and the elderly since the fish balls are nutritious and contain no bones. The smooth al dente fish balls are made with cornstarch and eggs and cooked in stock.

Foods made with aquatic ingredients are an important part of Hangzhou's culinary culture. Now, foodies can savor all kinds of local dishes made of fresh fish and vegetables at Yanshui Yuzhuang Restaurant in Xixi Wetland.

At present, Xixi is renowned for its picturesque reed beds and fiery persimmons which add a red hue to the season, especially at sunset.

If you prefer red meat to freshwater fish, the 16th Yangguo Festival in Yuhang District is highly recommended.

Yangguo Village has a 200-year tradition of cooking mutton dishes in winter. Though the hamlet only has 11 eateries, it can accommodate more than 3,000 diners at once after years of upgrades and development.

In the hamlet, mutton is often eaten braised, steamed or roasted, while the classic culinary method is stewing the meat. Mutton is reputedly good at warming the body up during winter, according to traditional Chinese medicine.

Goats and sheeps are famously good because they contain yang (hot energy) and keep energy in balance on chilly days. Traditionally, locals only cook one to two-year-old lambs weighing around 7 to 13 kilograms.

Instead of using a modern cooker, locals prefer a traditional clay stove to simmer the meat. The pot is a steel cauldron, at least 1 meter in diameter, that can cook an entire lamb. A sizzling pot of braised goat keeps food lovers coming back for more every annual festival. 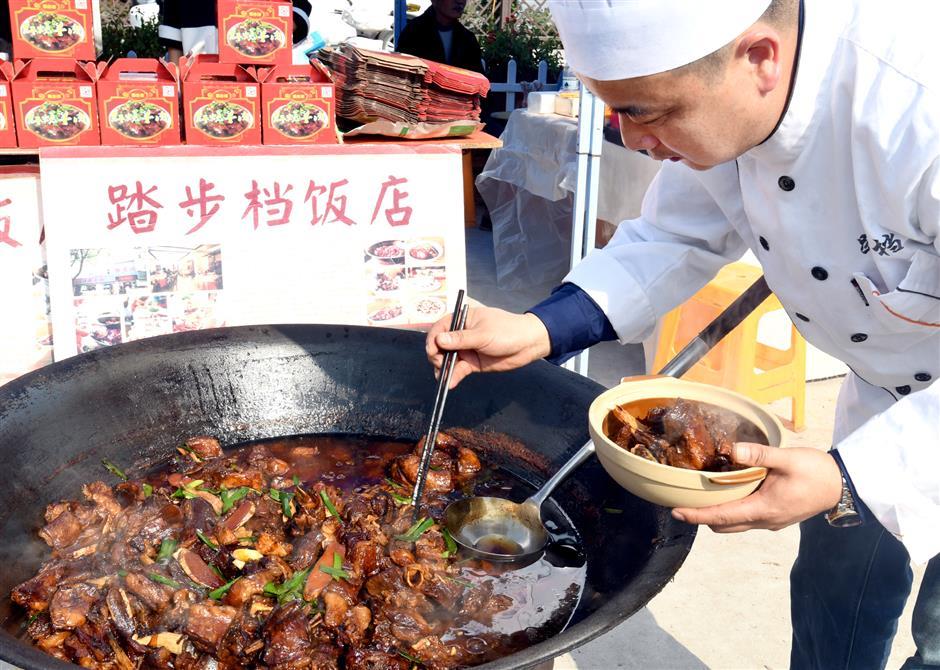 A chef shows the classic way to stew the goat meat in a sizzling pot.

Yangguo's stewed mutton is famous in the Yangtze River Delta region for its flavor, aroma and tenderness. During the previous 15 years, about 5 million visitors flocked to the village to sample its appetizing dishes.

Unlike the pale boiled goat soup from the pot, the village's traditional recipe has more mellow and umami flavors. Except for the signature mutton, a wide selection of meals, including snakehead fish and soft-shelled turtle cuisines, also attract local and out-of-town gastronomes every year.

The Yangguo Festival will run through the Chinese New Year which lasts till February 7.