Wuhan-based Wang Bin has been training on his rowing machine twice a day since the city was locked down on January 23 due to the novel coronavirus outbreak.

The machine had been sitting in the dust at home for two years when the middle-aged outdoor water sports enthusiast and organizer turned to it as his other outdoor plans were all abruptly interrupted.

“I was always traveling and doing sports outdoors, so this (machine) was never attractive to me,” Wang said. “Now that I was forced to do sports at home, I gradually understood its appeal and benefits for wellness, though I can’t wait to be able to hit the outdoors again.”

Using the machine became Wang’s only form of exercise as he gradually connected with those in similar circumstances in the online community. Eventually, he decided to train for a regatta in Shanghai which was recently transformed into an online competition.

Wang and his rowing mates are not the only ones striving to keep fit during this unusual time, when gyms are closed, group gatherings are banned, and sports events are canceled. Many others have found new ways to stay well, both physically and psychologically while homebound.

“Of course training indoors on the machine is completely different. Nothing compares with rowing a boat where you have communion with the water, with nature,” Pascal Frieh, president of the Shanghai Rowing Club and co-organizer of the international regatta, told Shanghai Daily.

“It is more to keep the community together, feel that we can interact from afar, support and motivate each other while waiting for some better times, which are hopefully coming soon.” 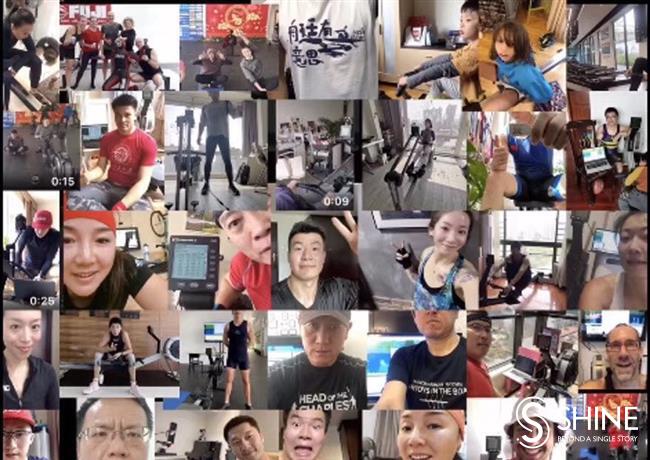 An international competition scheduled for the end of March in Shanghai has turned online.

The club adopted its name from one founded in 1863 as the first and only rowing club from Asia at the time, running until 1952. The current club was founded about 10 years ago when a group of expatriates wanted to keep their passion for rowing sports alive in Shanghai. Since then, it's grown from five to 10 people at weekly sessions to around 30 to 40 core members, plus another 30 to 40 casual participants.

About half are local Chinese and 40 percent are women. Like their rowing mate Wang, the Shanghai rowers had been training at home for more than two months.

They were able to get out for their first session at the end of March, when the curves were flattened around the country and restrictions eased in Shanghai. But an international regatta originally scheduled for the end of March in the city still had to move online as the pandemic quickly evolved globally.

“The online community is much bigger than when we started, with those from countries like Spain, Italy, France and the UK much more active. The US is another time zone but it's probably the same. There are also session names like ‘fight the corona,’” Frieh observed, adding that the online event was a successful first try although some participants had to drop out at last minute.

The switch to indoor rowing under restrictions has been boring to some, but its benefits for connecting people from a distance have prompted the club to keep it as part of its activities.

“A regular exercise routine helps one stay fit and also motivated, especially while locked at home and prone to feeling anxious,” said Jason Yue, a private trainer who moved his sessions online. Yue is still weighing when and whether to reopen his physical venue due to safety concerns.

Yue has already gotten used to instructing his clients who want to keep training via the Internet. But neither Yue nor his clients expected the current restrictions to last for as long as they have.

“I lost some clients during the past two months – doing it online is just not the same. You can’t judge their condition very accurately, but about half have stayed with me and continued with online sessions. Some have actually enjoyed it and told me it's the most fun part of their entire day while sitting or lying down at home,” Yue said. 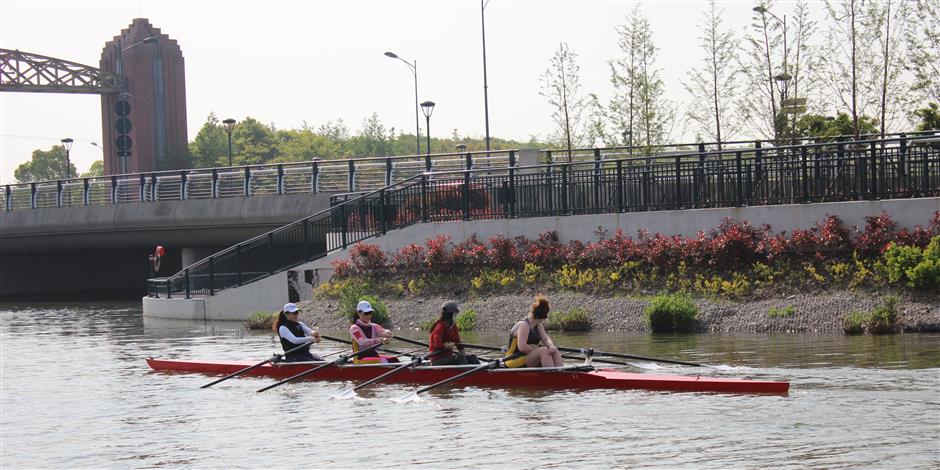 Members of the Shanghai Rowing Club finally hit the waters again after many were forced to train indoors for more than two months amid the COVID-19 pandemic.

For some people, though, it was sitting or lying down for meditation that helped with their confinement.

“Meditation training is widely accessible, easy to learn and inexpensive, and it may be an attractive and cost-effective intervention for coping with COVID-19,” explained Jia Lijun, a researcher with Shanghai's Longhua Hospital.

The hospital launched a series of three meditation albums in late February to help confirmed patients, health-care workers and the general public to cope with the pandemic. The albums, which have been made available for free on several online platforms, have been used more than 400,000 times, including by patients and health-care workers at some hospitals in Hubei Province, the heaviest-hit area of China.

Based on feedback, an English-language meditation album was created and recently launched by the hospital to help those outside of China. The album draws on both traditional Chinese texts about the relationship between body and mind as well as modern psychological research and practice, leading practitioners through an imaginary mountain path where a tranquil stream supports infinite vitality.

“For the past 40 years or so, meditation has proven effective in reducing psychological distress, assisting disease treatment and recovery, and improving the quality of live in various populations,” Jia explained. “Mental practice aims to promote psychological abilities such as emotional regulation and cognitive function."

He added that meditation can encourage individuals to pay attention to the present moment by directing and focusing their mind on a particular object such as breathing or physical sensation. This gives them a new vantage point to recognize unhealthy emotions and direct their attention more effectively toward self-regulation of the body and mind, thus helping to diminish negative emotions and strengthen internal motivations to overcome illness.

He suggested that people practice meditation daily in a quiet environment.

“You can sit or lie down, whichever is more natural, relaxing and comfortable for you, and then just simply follow the instructions on the album,”he said.

“We have been collecting and analyzing feedback on many before-and-after factors for this album, and will continue to conduct research on the mechanisms of meditation as an adjunct intervention for various diseases in the future.”

﻿
Special Reports
﻿
61922
,
61926
,
Online resources help minds, bodies stay fit amid confinement
Chinese medicine: defenders and doubters
Zhejiang medics back home after heroic efforts in Hubei
TCM a key player in the war against COVID-19
More questions and answers about COVID-19
Highlights of the latest COVID-19 diagnosis and treatment scheme
Feeling low? Thwarting the epidemic blues
Hangzhou does its part to battle epidemic
Goodbye to pain. The skilled hands that relieve misery
How much do we really understand about our brains?
EXPLORE SHINE