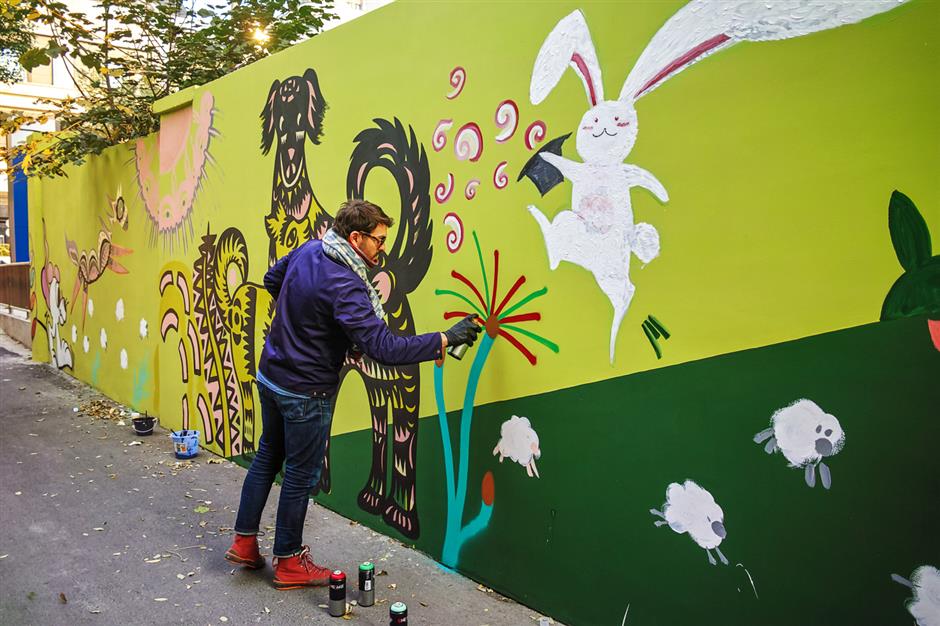 A plain and dull wall has been turned into a roadside gallery, a cross-cultural metamorphosis brought about by the street-style art form of graffiti.

Twelve artists, from home and abroad, with different background and occupation, came together over the weekend to enliven a 50-meter-long wall on Shimen Road 1 with colorful graffiti.

They sampled symbols of the city’s skyline as background. Each of them painted or sprayed one of the 12 shengxiao, the Chinese zodiac's 12 animal signs — rat, ox, tiger, rabbit, dragon, snake, horse, goat, monkey, rooster, dog and pig — related to each year according to the 12-year cycle.

The graffiti will stay on the wall for two years as a new and unique street-side artwork, according to organizer Li Jingjing, co-founder of the Oriental Danology Institute.

“We received nearly 100 applications from home and abroad, and finally we selected 12,” said Li. “Participants included an overseas student, a fashion designer, an art teacher and a picture book writer.”

“I drew the image of a dragon at another art event, so this time I decide to draw a tiger, which is also a symbol of China,” Muglia said.

Freelancer Frances Lin, from Canada, adopted the image of merry-go-round and painted a horse.

"Why does a horse look like that? That question springs to mind. So strangers who stop next to each other start to have a conversation inspired by the painting," she said.

“Living in a large city like Shanghai, people can get lost and even forget to say hi to their neighbors."

Lin believes public spaces dedicated to art are great venues to open a dialogue with and between people and the community.

“The essence of culture is to foster people. We hope to actively mobilize what we have to introduce international cultures to the community and let our residents be part of the cross-cultural exchange,” said Wang Jieming, an official with the Nanjing Road W. Community, which administers the road.

In May last year, Li’s team organized a cultural event featuring the work of Chilean artists at the historic Zhangyuan Garden, a shikumen neighborhood in the community.

It was a chance for local residents to show the Chileans as well as the general public how life in Shanghai’s famed lanes and alleyways once thrived. Also, people could find common ground between the two cultures.

“Both ancient Chinese and Chileans used tied knots,” said Li. “Taking that concept, we asked residents to hang traditional items of daily use, like buckets, on ropes, together with Chilean knots that link buildings.”