Balancing creativity and accuracy in kitchen

Half the Sky
Shot by Zhou Shengjie. Edited by Zhong Youyang and Li Anlan. Special thanks to Andy Boreham.

FOR DeAille Tam, the kitchen is a battlefield where one has to work with comrades, tapping their individual strengths to create unforgettable meals.

In an industry dominated by male chefs, Tam is the only female head chef in all the 30 Michelin-starred restaurants in Shanghai.

At Bo Shanghai, which has one Michelin star, Tam and Simon Wong, a co-head chef and home partner, strive every day to bring Alvin Leung’s vision of creative eating to the table.

London-born Leung, dubbed “the demon chef,” created his own cuisine, which he calls “X-Treme Chinese.” He has opened restaurants in London, Hong Kong and Shanghai.

His unique approach to gourmet dining seems tailor-made for an ambitious, competitive cook like Tam. Born in 1984 in Hong Kong, she relocated to Canada with her family at the age of 10.

“My initial career plan was to become an architect, but in Canada it wasn’t a very popular field,” she said. “Then I turned to engineering, which seemed interesting. There are a lot of guys in engineering. I always like to compete with guys, I don’t believe that I can’t do anything they can do.”

Engineering was also a logical choice since Tang excelled in mathematics and science in high school. But while in university, Tam had to make her own meals, and that’s where her interest in cooking was first piqued.

“My friends said the food I cooked was different and amazing,” she said. “I began to think that maybe it was something I would like to do. I found myself spending more time thinking about how to decorate a cake than how to look up data on a computer. I guess I just wanted a change, to do something that made me happy and my life more meaningful.”

Tam started taking cooking courses in her spare time. Eventually she dropped out of engineering to pursue a career in cooking.

In 2010, Tam enrolled in the culinary programs at George Brown College in Toronto. Her plan was to specialize in pastry, but she found classes in butchering meat and cutting up fish so exciting that she decided to expand beyond pastry and master all kitchen skills.

Tam graduated from culinary school with cooking, management and later, a post-graduate degree in Italian cuisine.

Tam met Wong, originally a medical student, at the culinary school, where he also had made a career change.

Tam’s background in engineering wasn’t wasted because scientific studies in theory helped her think outside the box when it came to food.

DeAille Tam gives the finishing touches to a dish. In an industry dominated by male chefs, Tam is the only female head chef in all the 30 Michelin-starred restaurants in Shanghai. 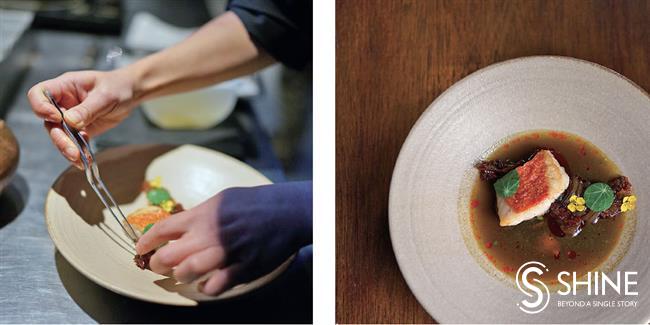 DeAille Tam works on a new dish. Most of her creations are based on the flavors of the eight major Chinese cuisines. Here, she gives a Western twist to create the Sichuan-Bollito Misto which includes grouper, jellyfish and Sichuan red oil.

“I think of cooking as a balance of creativity and accuracy,” she said. “Some things require very specific details. For example, a recipe needs to be followed very strictly, but sometimes there’s a spontaneous moment when a new ingredient is added.”

Male chauvinists may say that a woman’s place is in the kitchen, but that mind-set traditionally stopped short of the kitchen door at premier restaurants, where top chefs were almost exclusively men. However, the gender gap is closing.

“I don’t think that any female entering the field feels that difference,” Tam said. “Guys understand that it’s a world of equal opportunity now and this is a world of equal gender rights. It’s true there are very few female chefs because a lot of women are afraid to try. Those who conquer that fear are the ones who will succeed.”

The only disadvantage to being a female chef, Tam said, is that she doesn’t get to wear beautiful clothes to work. But her joy of cooking overcomes that.

“I don’t like to sit still and deal with the same thing over and over,” she said. “There’s always constant change and excitement in this job, and a future I cannot begin to discern but I know will be great.”

Bo Shanghai’s theme is based on the “eight famous Chinese cuisines.” In addition, every season melds in the cuisine of another country. Right now, the pair is trying to connect Chinese food with Italian cuisine, food, identifying the differences and similarities between the two styles of meal preparation.

What makes Italian food Italian? Maybe it’s the olive oil, the pasta or techniques like fermentation? If all those ideas are placed into the context of Chinese dishes, links can be found. For example, in Anhui Province, people like to ferment and preserve things; in Guangdong, they like to keep the ingredients fresh.

Tam hasn’t had the time to travel around China sampling all the unique regional cuisines, but she does talk to people from different provinces, pressing them on the rituals of their hometown cooking. On days off, she samples regional cuisines in specialty restaurants in Shanghai.

“It’s not about an ingredient or a dish — it’s about a feeling that you get,” she said. “I learn the ideas and then I develop a dish based on the flavors and the techniques. The most important thing is the experience that a dish gives to diners.”

People are always asking her what she eats every day.

“I don’t eat Western food, perhaps surprisingly,” she said. “I like to try things that are new to me.”

Bo Shanghai received a Michelin star in the French guide’s second year of rating restaurants in Shanghai. The honor has spurred Tam and her team to push their limits and improve what they do.

Her ultimate goal is to make Chinese cuisine part of that whole scene of fine dining worldwide.

“I want to be part of the evolution taking Chinese food to a higher level globally,” she said. “That is my biggest dream because I am Chinese, no matter where I live, no matter where I’ve been and no matter what language I speak. I’m really proud of everything that I’ve learned and experienced in this unique country, and now it’s time to spread the word across the rest of the world.”