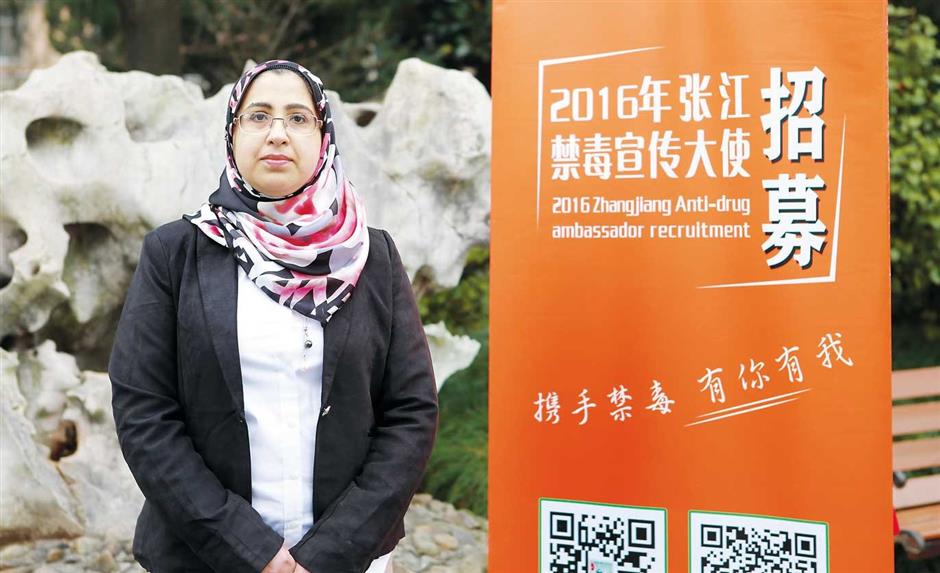 They are among 107 volunteers in Zhangjiang township who report pollution in the Chuangxin River.

Aiza has been a biology teacher in a private school in Shanghai's Pudong New District since she moved to Shanghai with her husband in 2012. She was asked by the township government to supervise river protection as an unofficial "river chief" this year.

Aiza believes the offer was partly due to her work as an anti-drug campaigner in 2016 in Zhangjiang, when she organized a concert to raise drug awareness.

"My husband and I decided to patrol the river together so that we can help each other and talk about what needs to be done," she said.

She is required to report everything from changes in water quality to floating garbage to damaged river banks.

"The work is not difficult. I just take photos of problems I see, and post them in our WeChat group," she said.

Aiza's work is made easier by GPS positioning attached to her photos, since she can not read or write in Chinese.

As unofficial river inspectors, they don't have to deal with the problems they find, only report them.

"My reports are taken care of by professional staff," she said.

Born in Lahore, Pakistan's second city has a PhD in pharmacy from the University of the Punjab.

The river chief system began in 2016. River chiefs are normally administrative officials accountable for bodies of water under their supervision.

"I was a little skeptical when I got the offer. Will this actually help the river environment? Am I qualified for this position?" said Aiza. Her husband convinced her to take the task and they decided to do it together.

Aiza and her husband are responsible for two different sections of river. When her husband, a veterinarian, is away on business trips, she does both patrols by herself.

"On weekends, we often take our kids walking along the river together and I take the chance to share with them things about water resources and environmental protection," she said.

Aiza said the water quality has improved since she took up her role.

"Floating garbage rarely shows up now, and when it does, it is soon cleared,"said Aiza.

Her neighbors and her students' parents are delighted by her volunteer work. "I sent videos and photos of our work to our families in Pakistan. They are very supportive," she said.

Recruiting unofficial river wardens is an attempt to ensure public supervision of official river chiefs. Some cities have set up security cameras and underwater monitoring devices to carry out the supervision. In addition to Shanghai, in provinces of Guangdong, Sichuan and Zhejiang, many foreigners have been invited to join the work.

Aiza plans to bring up the topic of water protection at her school. She encourages students to check water quality index at school, and plans to invite the students and their parents to a forum to share ideas.

Aiza said her 16-year-old son wants to be a doctor in the future, and Fudan University in Shanghai is one of his dream schools.

"My children can both speak Chinese fluently, and I've recently started to learn Chinese myself," said Aiza. The family has made Shanghai their second home.