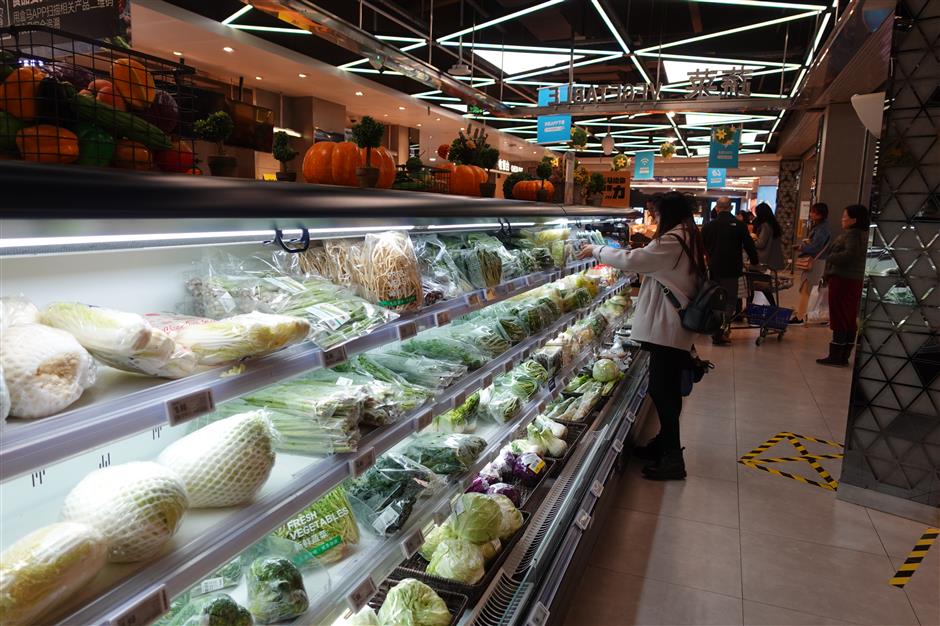 A customer picks vegetable at the Daning store of fresh food retailer Hema Fresh of Alibaba Group in Shanghai, China, on November 21. 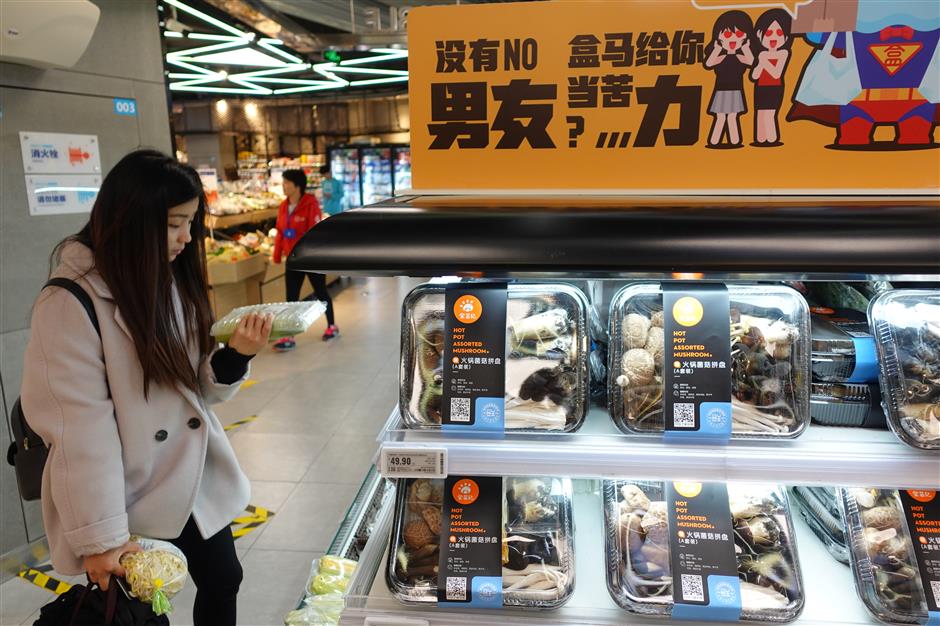 The general manager of Hema Fresh Shanghai was sacked on Wednesday after an employee of the Alibaba Group food retailer was found replacing old labels on food with new ones showing a later date.

Hou Yi, CEO of Hema Fresh, apologized and said inspections have been conducted at all outlets of the food retailer to improve its operation standards in an open letter posted on Weibo.

Strictest punishment will be delivered for any violations against consumers, he said.

Hou said Hema Fresh will recruit consumers as its service inspectors after the incident.

The retailer said it strictly prohibits such practice and the management was not aware of the act.

The food retailer will face punishment over suspected consumer fraud, an official with the Jing'an District market watchdog said on Wednesday.

The punishment will be imposed for suspiciously providing commodities with fraudulent means which infringe consumers' rights based on the Shanghai consumer rights protection regulations, Wang Zheng, deputy director of the Jing’an District Market Supervision and Management Bureau, told Shanghai Daily on Wednesday.

If the illegal profits could not be counted, a fine of up to 100,000 yuan will be imposed. In serious cases, businesses will be ordered to suspend operation for rectification.

Businesses should compensate three times of the price of the product to consumers in such cases, or 500 yuan if the compensation does not reach the figure, the regulations state.

The city's food safety law covers the practice of fabricating production date or expiry date on food, but carrot is agricultural product and the concept of production or expiry date can not be applied on it, said Wang.

The date on the package is more like packaging date or the date when the product hits the shelf, making terms in the food safety law unable to be applied in the case, he said.

The incident came under the spotlight after a shopper, surnamed Fang, told Shanghai TV that he saw an employee at the Daning store ripping labels off carrots which showed production dates of November 9, 10 and 11, before sticking on new ones dated November 15, the day of the visit.

"I was shocked when I picked the tag from the garbage bin and saw the dates," said Fang, who reported to workers at the outlet immediately.

The company offered Fang a 1,000 yuan cash bribe to withdraw his complaint, which he turned down, Fang said. He tipped off the Jing'an bureau at the time.

The total packs of carrots involved amounted to 180, and 107 had ready been sold by November 14. The rest had been taken off shelves and sealed.

Hema Fresh said it was “ashamed” of the incident. The employee concerned has been fired.

The incident has triggered a buzz among consumers.

“I visited a Hema outlet close to my home very frequently because I think its food is fresh and good quality,” said Anna Chen, a resident living in Xuhui District. “It is very disappointing, particularly when the prices of Hema’s vegetables are much higher than normal supermarkets.”

“I think the practice is so bad because I often buy food there for my daughter, and I may turn to other supermarkets after the incident,” said Du Bing, another resident.

Last year, the Luhua outlet of Shanghai Chongming Hualian Supermarket was fined 10,000 yuan by Chongming market watchdog for fabricating expiry date on frozen yellow croakers by almost half a year. 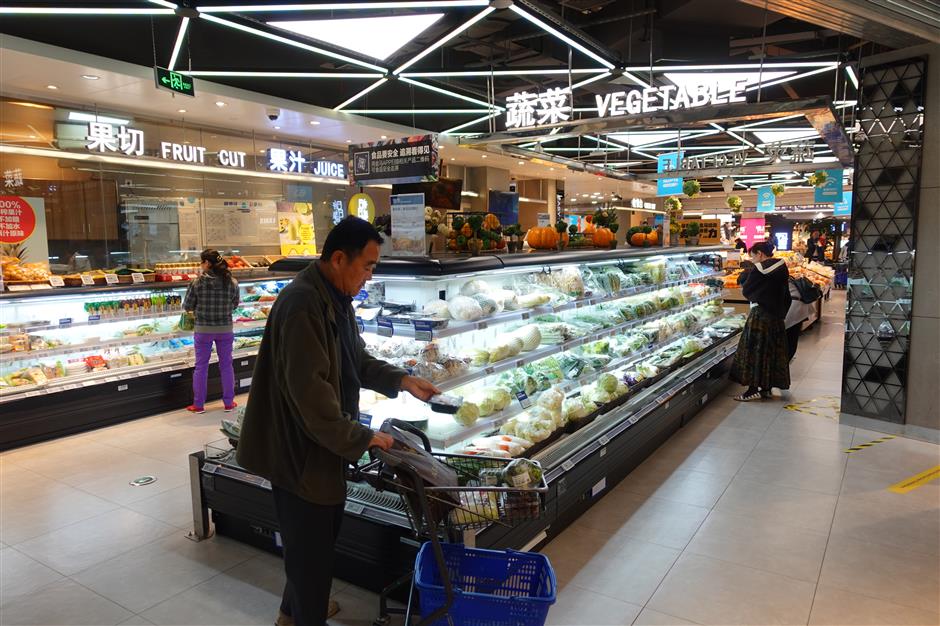 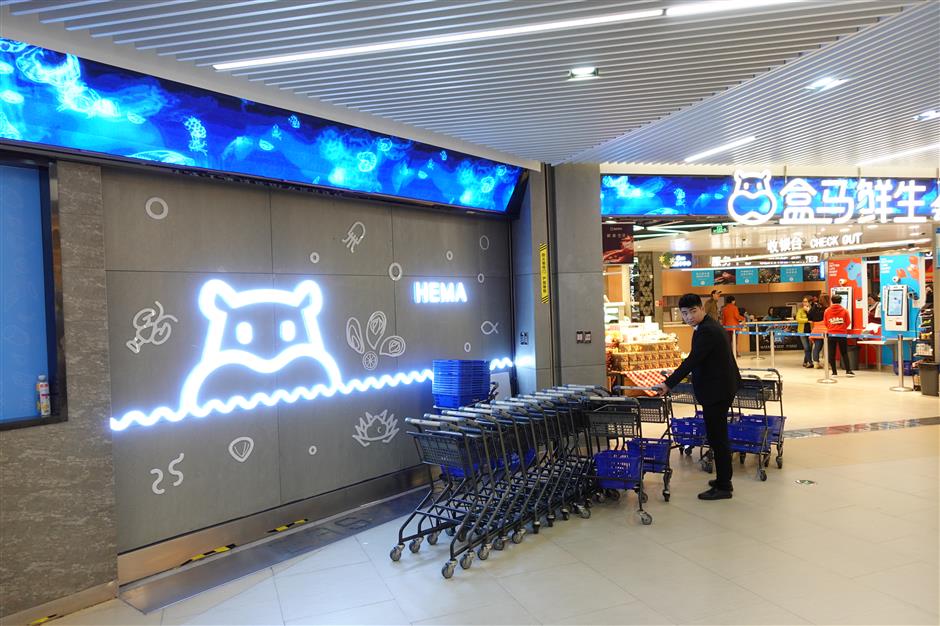