Shanghai to act against e-scooters 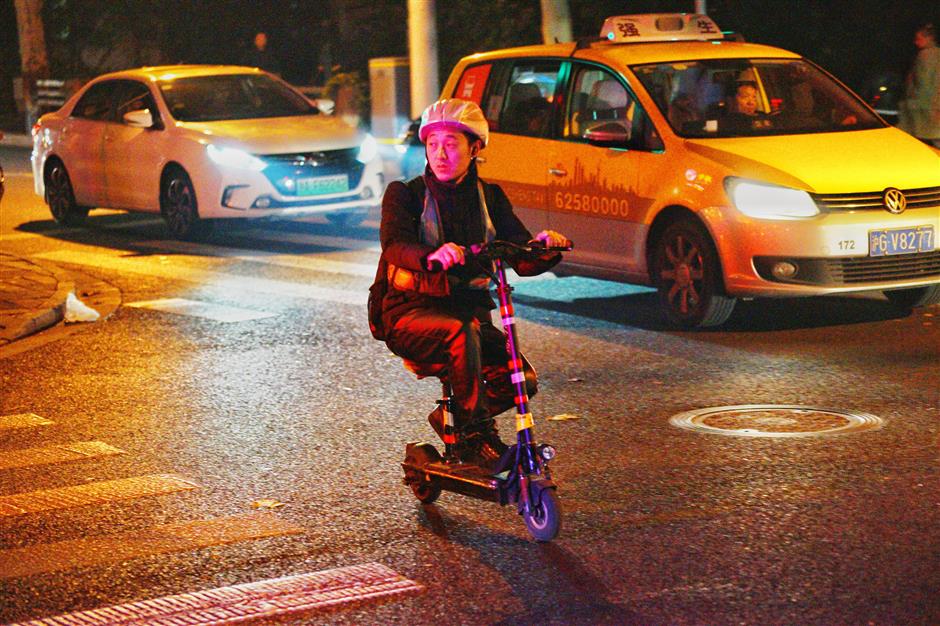 A man rides an electric scooter on a road in Shanghai on Saturday night.

As if Shanghai’s traffic was not bad enough, the city’s situation is increasingly complicated by unregistered electric scooters and other banned vehicles.

Police have issued a new citywide directive that sets out for the first time fines and other punishment users may face.

Over the weekend, police said people who illegally use small-wheel e-scooters and one-wheeled or two-wheeled self-balancing personal transporters face fines of up to 100 yuan (US$14) for first-time offenses. Repeat offenders will have their scooters impounded and must pay 500 yuan to get them back.

Shanghai traffic regulations class scooters as “mobility tools” and they are not allowed on the roads. There is currently no system for registering these vehicles. The only places where scooters can legally be used are non-traffic areas, such as inside residential complexes.

A traffic police official who asked to remain anonymous told Shanghai Daily that punishments for illegal scooting previously varied from district to district, ranging from warnings and fines to scooter seizures.

Police say the scooters pose traffic risks in motor lanes. In March 2015, a man on an e-scooter was killed by a taxi in Lujiazui of the Pudong New Area, after bumping into the car when cutting across traffic lanes. He was a designated driver, one of a group of people who assist clients too drunk to drive home themselves.

In Shanghai, these designated drivers are the largest group of e-scooter users. It’s a relatively fast, easy and cheap way to do their job. They fit easily into the trunks of client cars in the nighttime hours when they do most of their business.

While many designated drivers still use e-scooters, some have switched to foldable e-bikes. One of them, Hu who lives in Jiading District, said he made the switch after being fined seven months ago.

“The wheels of e-scooters are too small, which makes them less safe than e-bikes,” said Hu, a designated driver for two years.

However, Hu thinks the scooter is still a superior means of transportation because e-bikes, unlike scooters, are not allowed on Metro trains, and many e-bikes when folded don’t fit into the trunks of many cars.

“The rental cost of shared cars is getting higher and unaffordable for frequent use,” he said. “More night buses connecting downtown and suburban districts would be a better solution.”

But e-scooters are growing in popularity among white-collar workers. Fan Junjie, an IT engineer on night shift downtown, has been riding an e-scooter to and from work for two years. His home is not far from work.

“I rode an e-bike before, and the batteries were stolen several times,” he said. “When I got home in the early morning hours, the bike-parking area in my residential complex was already locked, so I had to park the bike downstairs.”

The scooter saves him the trouble of trying to find a shared bike after work around his office building.

“I never ride the scooter during the rush hour, and I make sure not to use it in motor lanes, so I don’t think a scooter is any less safe than using other mobility tools,” Fan said.

He hopes scooters will someday be registered.

Police said in the same statement that skateboarders and roller skaters will also face fines for illegally using “mobility tools for sliding” on the streets.

Those caught receive warnings the first two times. If they are caught a third time, they face a 50 yuan fine.

Some senior citizens use vehicles shaped like mini cars on the streets, but police now warn that such vehicles also face repercussions if they are used in traffic lanes. Offending vehicles will be temporarily seized, and owners will have to pay 200-1,500 yuan to retrieve them. In cases where the vehicle is identified as motorized and the driver has no driver’s license, the driver will be fined 1,500 yuan and could face up to 15 days in detention.

Police said they will step up law enforcement against the illegal use of unregistered forms of transportation by setting up roadblocks and increase daily patrols.