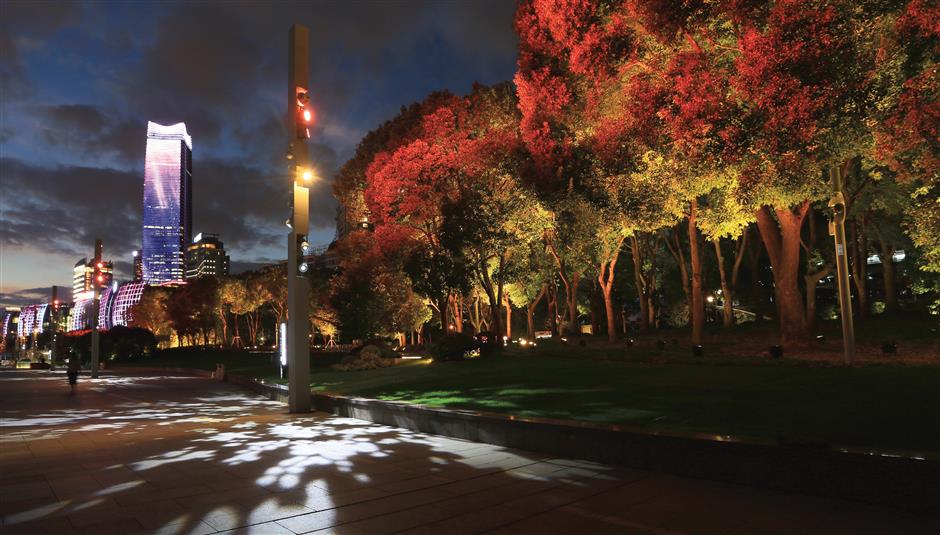 The lighting of the North Bund area in Hongkou District has been upgraded to better illuminate the city’s historic cargo and passenger harbor along the Huangpu River.

Themed on “Sail,” the new lighting system incorporates water elements, landscape and culture to represent the shipping industry. Cutting-edge lighting technology has been used to showcase the flourishing North Bund development as well as highlighting the waterfront’s shipping and water culture.

The city’s urban planner intends to develop Hongkou’s Huangpu River waterfront, which stretches 2.5 kilometers, into a desired site where tourists and residents can appreciate the river bank and its many historic landmarks.

The waterfront area was previously home to state-owned enterprises which had been long closed to the public. Residents are now able to walk or cycle from Waibaidu Bridge to Qinhuangdao Road along the river through new paths.

Artistic lighting scenarios have been created for the Shanghai International Passenger Transportation Center, where the city’s shipping industry began.

Eight landmark buildings in the area have been illuminated, based on both their existing lighting and an optimized controlling system. They include the 320-meter-tall White Magnolia Plaza, the tallest building in Puxi, as well as the transportation center and the Shanghai International Port Group (SIPG) building.

Four animated films themed on shipping, water, white magnolia and sea, representing Shanghai and the North Bund, are being played continuously on these buildings to create a dazzling light show at night.

“Designers aim to revitalize the long and narrow harbor for both cargo and passenger transportation,” said an official with the district government.

Ripples are projected on to the ground, while several small bulbs flicker to make the harbor look like a glistening river at night.

Stretching 1.2 kilometers along the riverbank, the harbor site offers amazing views of the Lujiazui Financial Zone. It is the best place to take a postcard photo of the illuminated area.

The British East India Company built the first cargo dock in Xujiatan, near what is now Daming Road E., in 1845. There were once eight major docks along the Huangpu, including the famous Huangpu, Yangshupu and Gongping Road docks.

When workers loaded cargo in the 1950s, the ship’s sirens could be heard from far away. It served as a major cargo transport hub until the 1990s when other major ports were developed in the city’s Pudong New Area and northern Baoshan District.

The transportation center is the focal point structure for cruise liner passengers on the North Bund and is nicknamed “The Drip” because it is blue and shaped like a drop of water.

It took only 10 years to turn the 140-year-old Gaoyang Road Dock, the city and nation’s first port for foreign cargo, into a cruise liner hub. Docks and crane yards along the river have become wharfs for international liners. Hundreds of porters have been replaced by over a million foreign visitors worldwide every year.

In its latest development, the SIPG Cruise City, on the harbor was officially listed as a level 4A tourist attraction — 5A is the top level. The 73,000-square-meter cruise city features attractions such as the Shanghai International Passenger Transportation Center, the Rainbow Bridge, the Shanghai Docks Heritage Museum, a sports park, a music plaza and shopping malls.

The lighting designers have also illuminated the greenery gardens along the waterfront to create an urban forest.

Inspired by traditional Chinese ink paintings designers used green lights from the bottom and side of the greenery to highlight the leaves and flowers. In the autumn, lighting turns yellow and orange to highlight the red maple and yellow leaves. 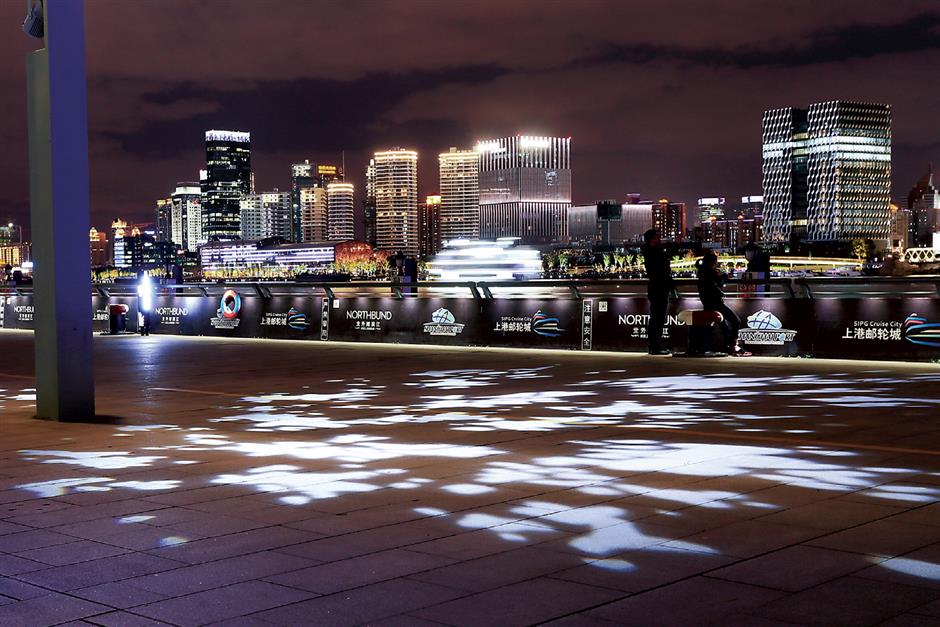 The North Bund area, opposite Lujiazui, has been developing into a world-class cruise liner hub and financial center to support the city’s plan to become an international shipping center by 2020.

The city and district governments plan to turn the North Bund area into an upmarket business district with office buildings and commercial facilities. The once glorious docks have been replaced by riverside parks, luxury hotels and the White Magnolia Plaza on Dongchangzhi Road.

To commemorate its glorious history, the Shanghai Docks Heritage Museum has opened as one of the major attractions. The museum, within a riverside park, includes industrial relics, sculptures, videos and historic exhibitions about the docks.

The museum highlights the history of celebrities and renowned scientists who entered Shanghai from the docks, including Albert Einstein and Charlie Chaplin.

The old S.C. Farnham & Co site was the first large-scale shipyard in Shanghai, built by British company Boyd and Co in 1862. The structure on 388 Dongdaming Road is among the best British industrial properties in the city.

Other heritage sites include the former location of the American Jewish Joint Succour Committee, built in 1910 on Huoshan Road, the Tilanqiao Prison on Changyang Road, known as the first prison in the East Asia, the 1933 Old Millfun, once the slaughter house of Shanghai municipal council, the Shanghai Jewish Refugees Museum and the historic Ohel Moishe Synagogue.

New attractions have also been developed for the waterfront. They include an authorized SIPG football club store. SIPG is one of the city’s most prestigious football teams. Fans and tourists can buy replica football strips, hats, flags and other merchandize. A vintage cafe featuring antique Forever bikes, the city’s oldest bicycle brand, has become a favorite place for selfies.

As the newest highlight of the riverside attraction, an outdoor entertainment complex named “Magic Jungle” has been officially unveiled. The German-designed project features 94 challenges ranging in difficulty from low to high for both children and adults.

Alongside these attractions, commercial facilities have been developed, including various food stalls. Visitors can dine in the neighboring SIPG Cruise Kitchen, which features many Internet-celebrated dining options. 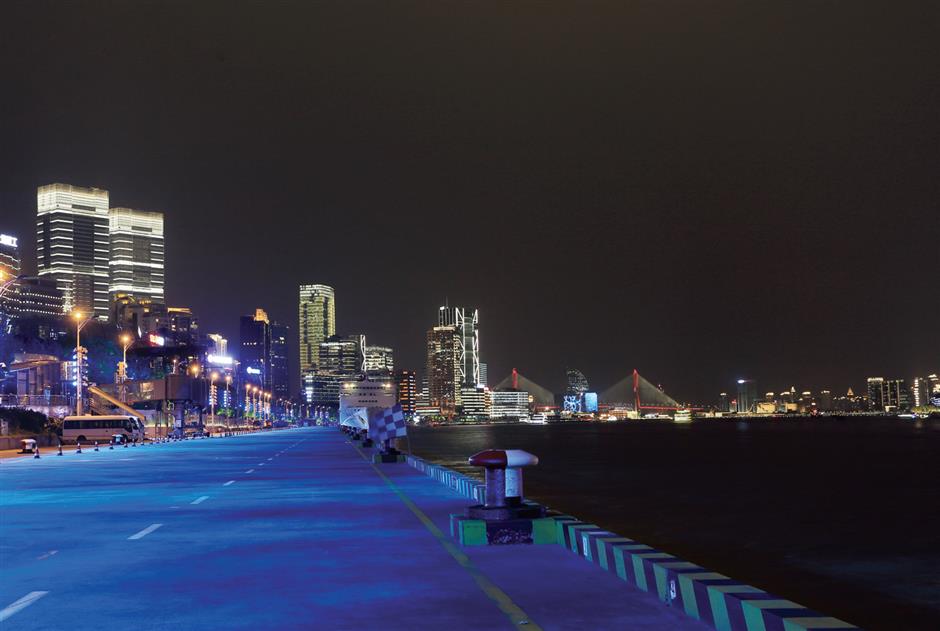 Hongkou has also launched the North Bund Financial Hub to facilitate the development of fund companies within the district.

A financial “golden triangle” has formed between the North Bund financial zone, Lujiazui at Pudong New Area and the Bund.

Hongkou has lured one-ninth of China’s mutual funds by tapping its regional advantages and offering favorable policies. The district, which lies in the city’s northeast, is home to 1,506 financial institutions, which manages over 5 trillion yuan (US$719 billion) of assets.

Sidewalks stretching 45 kilometers on the banks of the Huangpu in downtown between Yangpu Bridge and Xupu Bridge have been opened. The city now plans to extend those paths both upstream and downstream, while improving services and scenery on the section that is already open.

The North Bund’s upgraded lighting system is part of the city government’s plan to improve the newly opened waterfront paths while coordinating the colors and ambience of specific regions.

Some “strict color control” areas will be initially set up at historical conservation zones, along the river and creek, where colors of newly built structures will be strictly regulated based on the region’s existing ambience.

The city will issue color guidelines for second-level “key color control” areas. They mainly include waterfront zones that are currently under development, such as the middle and northern part of the Yangpu District waterfront, the South Bund in Huangpu District, as well as the Qiantan area in Pudong.

A color negative list will be issued for other areas, such as residential communities and industrial parks, to avoid major color contrasts.