Shen Ru shows the timetable of trains to a passenger at Shanghai Railway Station on Wednesday.

Shen Ru pushes the wheelchair of a handicapped boy on the platform of Shanghai Railway Station.

Both work on the railways. Shen Ru is an information officer at Shanghai Railway Station, Shen Yan is the crew manager of bullet train G7549.

“We are used to it,” said the twins. “It would be more surprising if we were actually together on a holiday.”

With only three days to go before the Spring Festival, the travel rush is reaching its peak. More than 150,000 people leave town from Shanghai Railway Station every day, so Shen Ru is extra busy.

Her shift on Wednesday was from 7:30am to 7:30pm, and she didn’t even have time for a proper meal. People constantly assailed her help desk, more than often than not asking the same questions — “Which waiting hall should I go to?” or “When will my train depart?”

At 2pm, three passengers, including a boy on wheelchair, came to Shen Ru because they couldn’t find the elevator to the platform. The train was about to leave, but because of the boy, they could not jostle with the others in the congested waiting hall.

When Shen Ru accompanied the passengers to the train and asked the train crew to take care of them, it was the first time she left the information desk all day.

“My job doesn’t have any clear responsibilities. I offer help to whoever comes to me, if I can,” she said. 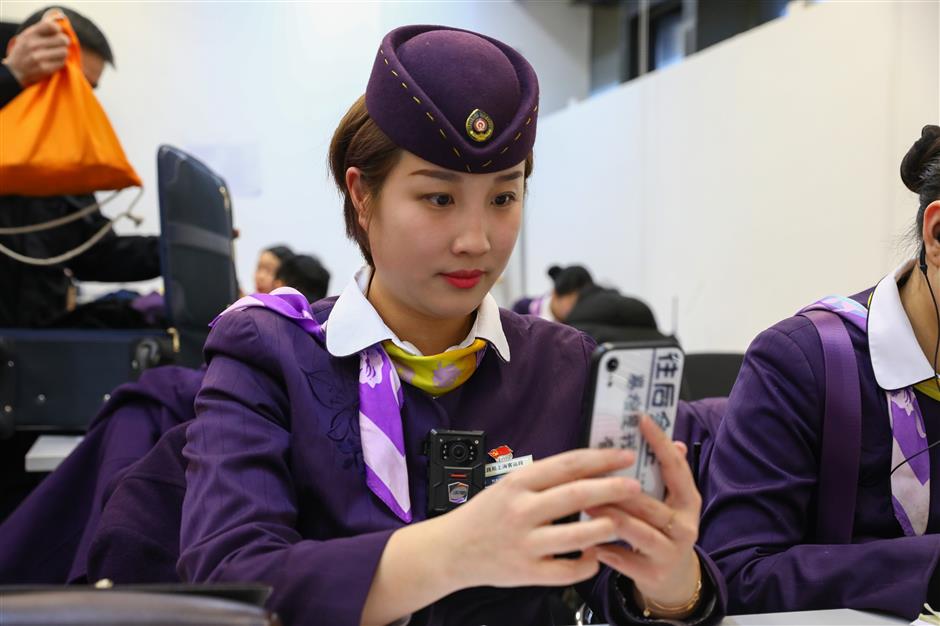 Shen Yan checks her make up before she gets on bullet train G7549.

At the same time, Shen Yan was doing an extra shift, speeding between Shanghai and Bengbu in Anhui Province. Her 4-year-old son doesn’t cry anymore when his mother leaves for work. “Make more money!” the little boy inculcates.

In normal times, Shen Yan works two days straight then takes a two-day break. She usually gets up at 5am and arrives at Hongqiao station around 6:30am. G7549 departs at 8:10am, but she has a lot to do before then, checking medical boxes, ticket allocation and surveillance cameras.

“People do not know that surveillance cameras are installed by the train crew,” she said. “All 32 of them, because G7549 is a fairly old model of bullet train.”

The train arrives at Wenzhou, Zhejiang Province around noon, then heads north to Nanjing in Jiangsu. On the second day, Shen Yan will repeat the same routine before eventually getting back to Shanghai at dusk.

The last time the sisters saw each other was January 21, their father’s birthday. The twins joke that not seeing each other can be a good thing as they always bicker. Growing up together, they started working in 2004, and at first, parting was not easy.

“I remember a call asking me to get on an extra train for the Spring Festival in 2005 while we were having a family dinner together on New Year’s Eve,” said Shen Yan. She never expected that such calls would become a common occurrence.

The twins’ schedule during the Spring Festival means they spend more time at work than they do at home. They said that knowing people are getting home safely is more important than their own holidays. 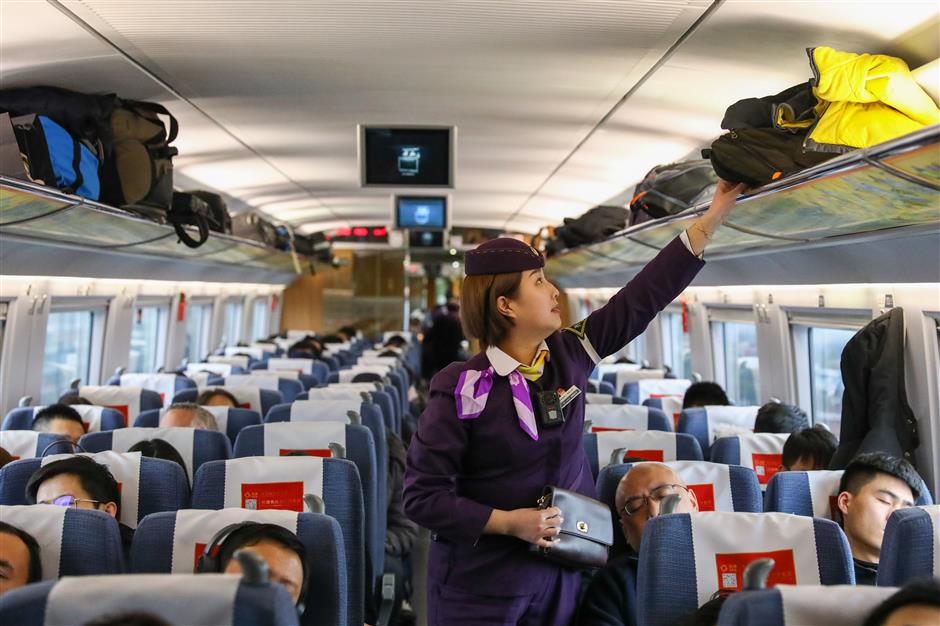 Shen Yan makes sure the passengers' luggage was safely placed on the baggage holder on the train.