Protecting history is not protecting commerce

Protecting Shanghai's history is more about preserving the lifestyles of the people than trying to make huge profits, according to Katya Knyazeva, a Russian historian and writer who specializes in the vanishing old towns of Shanghai.

Knyazeva left Shanghai in 2016 after a 10-year stint citing the “low intensity of intellectual and artistic life,” and has written two books on old towns.

Knyazeva returned to Shanghai in December last year and will leave again on Tuesday. During her two-month stay, she felt the city seemed to have slowed down a bit.

“It is good to see the city take a break from barbaric growth,” said Knyazeva, “and to focus more on development of culture.”

Knyazera said she did not like what had happened to Jianyeli or Prada Rongzhai, which replaced ordinary people's homes with empty commercial enterprises.

“I read about the renovation of Chunyangli in Hongkou,” said Knyazera. “It could be a good example of how to save a historic building while preserving its original vitality.”

The Chunyangli renovation project retained the original appearance of the shikumen built in 1921, but the inner structures have been modernized.

Among those passionate about old Shanghai, Knyazera is known as Zhang Xia and used to lead walking tours in old parts of city.

“I felt most connected with the city when I walked through the small streets and allies,” she said.

Her first book was about Dongjiadu, which was totally demolished in 2013. In it she mapped out the history of 80 old alleyways through anecdotes, including the origins of the buildings and stories of the people who lived there.

Her second book, which will come out in March, looks at Laoximen, another old town soon to vanish.

“By documenting these disappearing corners, I hope to leave references for later generations when they are trying to understand the historical context of Shanghai,” Knyazeva said. “And through that, we may find a better way to balance the old and new.” 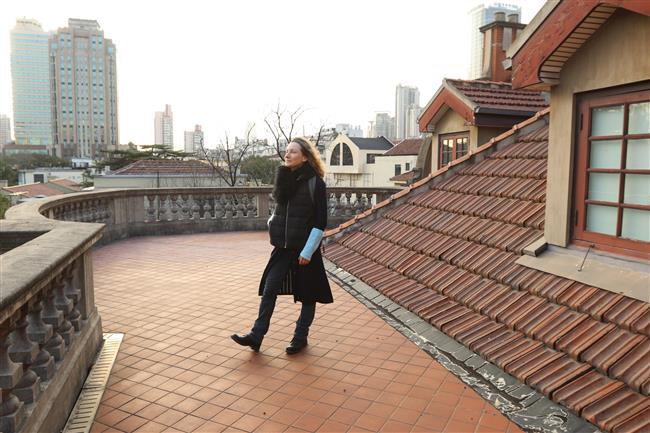 Katya Knyazeva stands at a balcony of a historic building in downtown Shanghai.