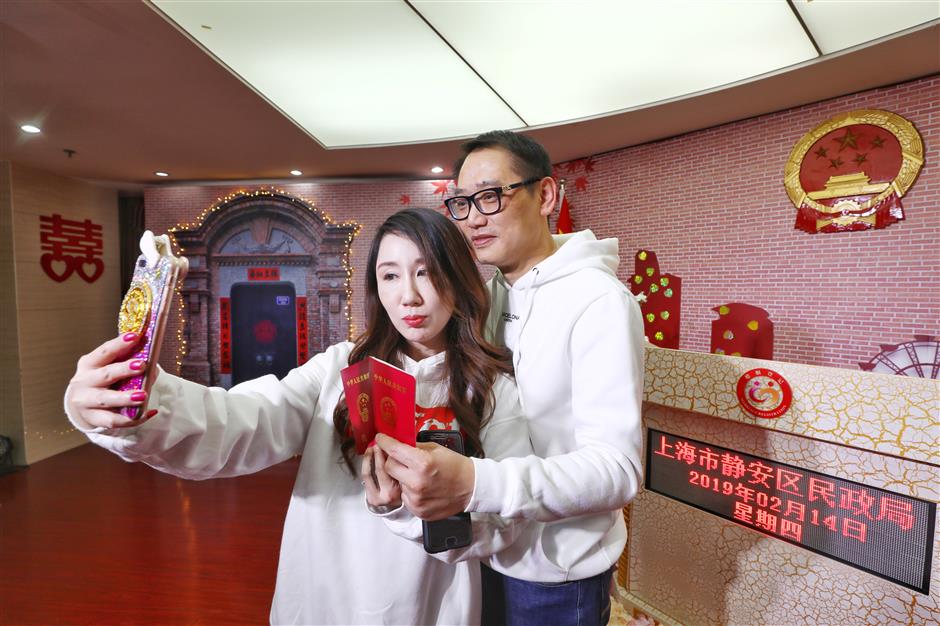 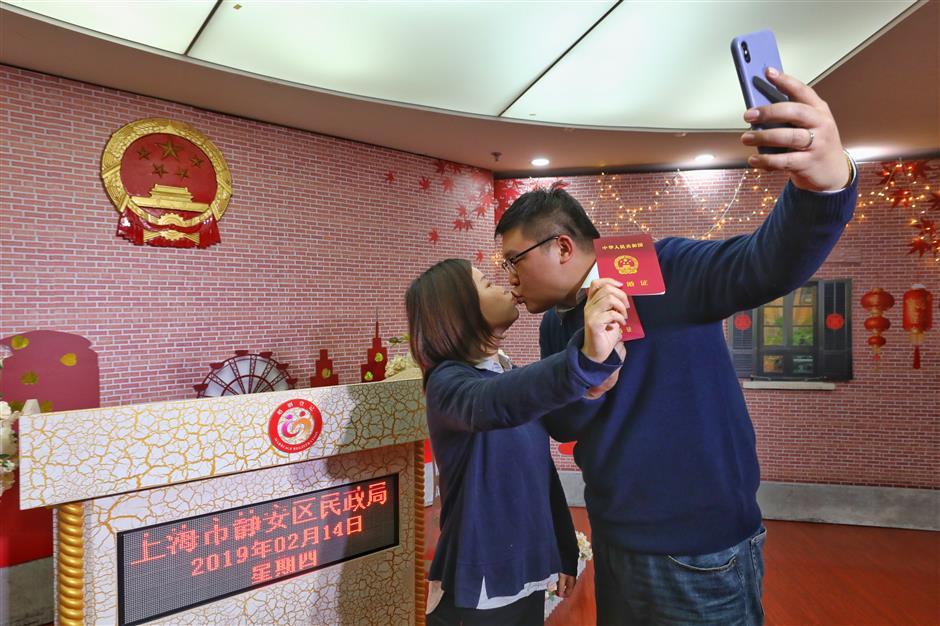 Zhu Xiaojun (right) and Li Yuting celebrate the happiest day of their lives.

A total of 2,273 couples said "I do" at marriage registration centers across the city on Thursday, Valentine's Day, according to the Shanghai Civil Affairs Bureau.

The figure, including 20 cross-border marriages, was about five to six times the daily average.

Marriage registration centers in the Pudong New Area received the most couples — 484 — followed by  Minhang (189) and Baoshan (142) districts.

The center in Jing'an District had received more than 100 couples by 3pm. More than 10 couples were waiting outside before it opened at 9am.  The center usually sees less than 50 couples a day.

Danny Shen and Jessica Xu decided to secure the date half a year ago.

"Today is my wife's birthday, and we will celebrate her birthday, our wedding anniversary and Valentine's Day together in the future," said Shen.

The lovebirds have known each other for 20 years.

Another couple, Zhu Xiaojun and Li Yuting, made their reservation a month ago as soon as reservations opened.

"It is a sweet day to finally tie the knot," said Zhu. "The date is also easy to remember."

In Xuhui District business was brisk.

"About 30 couples were queuing outside before we opened and all staff in our center are working today to cope with the big crowd, with volunteers on the spot as well," said Fu Junping, a center official.

Qixi Festival is another popular date for tying the knot. A total of 1,187 couples married in Shanghai on Qixi Festival in August last year.

Many couples pick auspicious dates to say “I do.”

On October 10, 2010, local authorities registered marriages of 10,150 couples, a record at the time. In Chinese tradition, the number 10-10-10 symbolizes perfection.

A total of 136 couples divorced in the city on Thursday.

As usual, the prices of roses surged, with a single bloom costing 20 to 25 yuan (US$2.95 to 3.69) compared with 5 yuan on normal days, partly because logistics had not fully resumed following the Spring Festival.