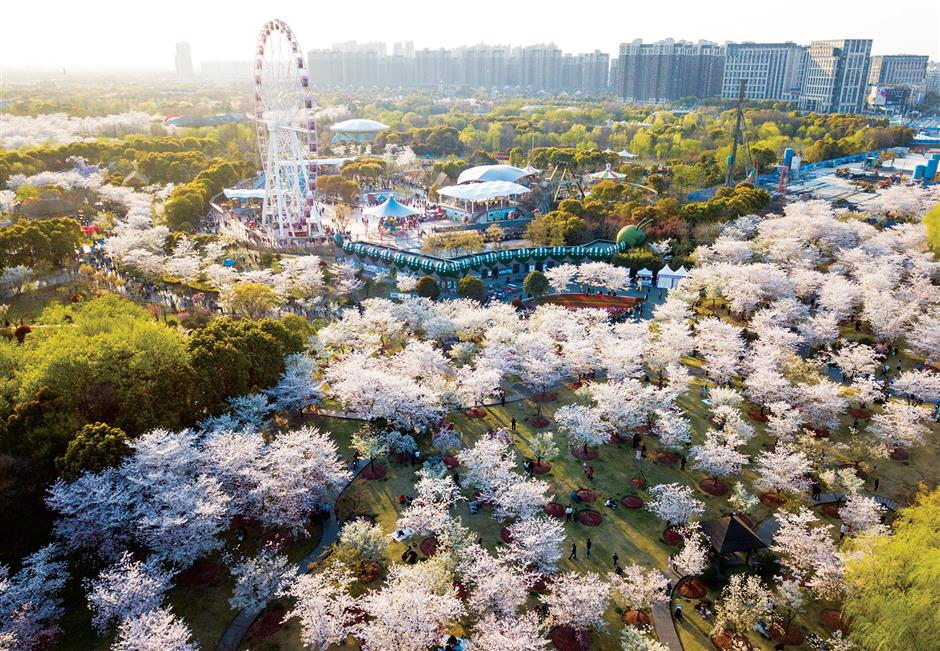 Cherry flowers are in full blossom at Gucun Park in Baoshan District. The annual flower festival, which concludes today, has attracted thousands of visitors each day.

The event, initially launched in 2011, is part of the district’s drive to promote its culture and eco-tourism. There are more than 12,000 cherry trees of 90 species in the park, the largest in the city, which have been blooming throughout the monthlong festival under the warm spring weather.

On average 100,000 people have flocked to the park on peak days this year, most of whom came in early April. More species have been planted which bloom at different times to allow visitors to enjoy the blossom throughout the festival, said Zhang Zhong, general manager of the park.

The park has five attractions near the entrances to the park. The Suburban Forest Zone, for instance, has nearly 4,000 pink, yellow and green blossom trees covering 130,000 square meters, which fully bloomed in late March.

The neighboring Children’s Carnival, which features a carousel, mini-train, pirate ship and a four-dimensional cinema, has around 500 cherry blossom trees along a river, including the Yoshino cherry, one of the most popular cherries. There are also magnolia and crab-apple trees planted among the cherry trees, creating elegant flower paths on the riverbank.

The festival has been so popular that a large swarm of visitors attended the first weekend of the festival.

Some 138,000 visitors flocked to the park on the second day of the month-long festival on March 16, more than double the same period last year, according to the district government. Another 121,158 people visited the park on the third day.

The parking lot, with more than 500 spaces, was fully occupied, while a long line of vehicles stretching for around 2 kilometers moved slowly along the Hutai Road.

The district government has dis-patched more than 1,400 security guards in and around the park to ensure safety.

Another 300,000 visitors were attract-ed to the park between April 5 and 7, which is the Qingming Festival holiday, or the tomb-sweeping day. 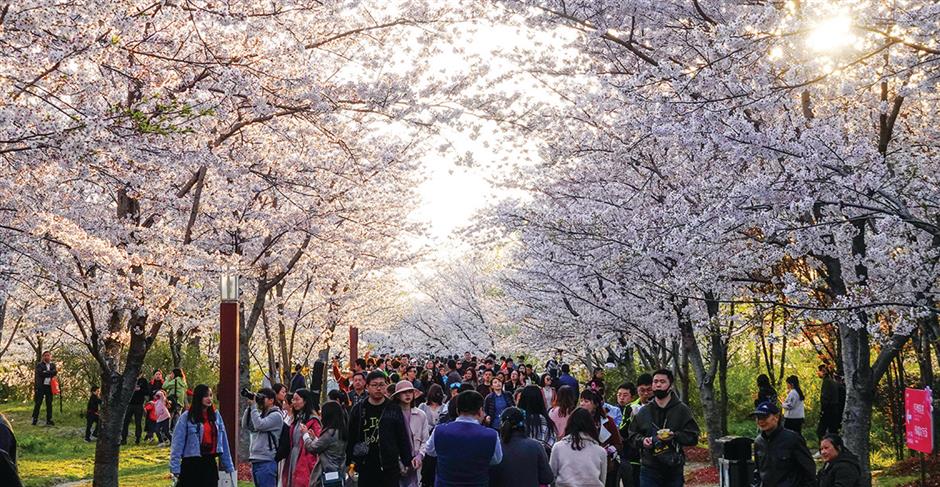 Measures have been put in place in case visitors exceed its maximum capacity of 200,000.

Ten shuttle buses are on standby to transport visitors to the nearby stations of Metro lines 1, 3 and 7. Authorities have also allocated extra parking spaces so that more than 5,800 cars can park.

To better serve the large number of visitors, the park operator has prepared a number of cultural activities, such as a photography and poem-writing competition, as well as a public poll to select the most beautiful cherry trees.

As a traditional event, “the eight most popular trees” have been marked in the park. These are trees photo-graphed more than others in the park. And through the park’s WeChat ac-count, visitors are invited to vote for this year’s “Cherry Tree Queen.”

A matchmaking event is also being held. Single visitors can visit a wooden pavilion behind the cherry flower area, where they can take part in games to make new friends.

Other activities, such as traditional Chinese opera, fashion shows and mar-tial arts performances, are presented in the park every weekend during the festival.

Visitors are invited to try making local pastry named tianhua yulu (天花玉露), or sky flower and jade dewdrop. The process of making it has been revived by masters in Baoshan.

As part of the festival, over 3,000 women took part in a 10-kilometer jogging event on March 11. The runners, in pink T-shirts, jogged through the cherry blossom forest. 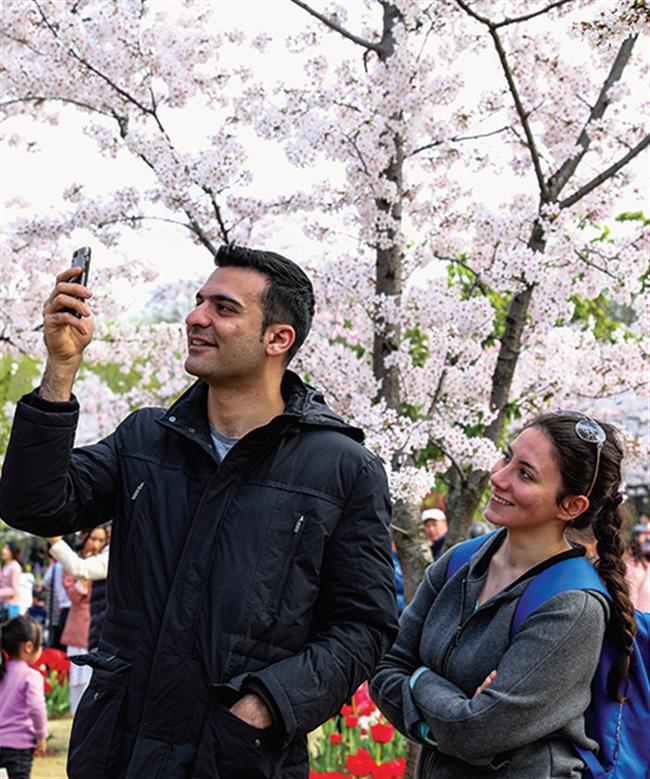 A nationwide promotion campaign for Shanghai’s cruise liner business was also launched in the park on March 30 to at-tract more travelers to take cruise liners from the city. The Cruise Culture China tour event started amid the blooming cherry flowers at the park.

The Shanghai Cruise Center, along with the world’s leading cruise liner companies, such as Carnival, Royal Caribbean, Costa and MSC, are promoting their lat-est ships and services in 10 coastal and inland domestic cities, including Beijing, Chongqing, Fuzhou and Kunming.

The Shanghai Wusongkou International Cruise Terminal, officially opened in 2011, has become the biggest home port for cruises in Asia. It overtook Barcelona to become the fourth-largest in the world. It has served a total of over 2,000 cruise liners and 13 million inbound and out-bound travelers since its opening.

Two new luxury cruise liners will sail from the terminal this year and make the Wusongkou terminal their home port.

The 168,000-ton Spectrum of the Sea from Royal Caribbean International will feature the iconic Sky Pad, a sphere with four bungee trampolines simulating a journey across the center of Earth and taking visitors on an adventure to an-other planet via virtual reality.

The 135,500-ton Costa Venezia, the largest cruise liner from Costa tailor-made for the Chinese market, set off in Italy to the Baoshan terminal in March.

The terminal has begun offering shuttle buses to ferry passengers from the city’s Pudong and Hongqiao inter-national airports, as well as railway stations, to the terminal directly, the district government said.