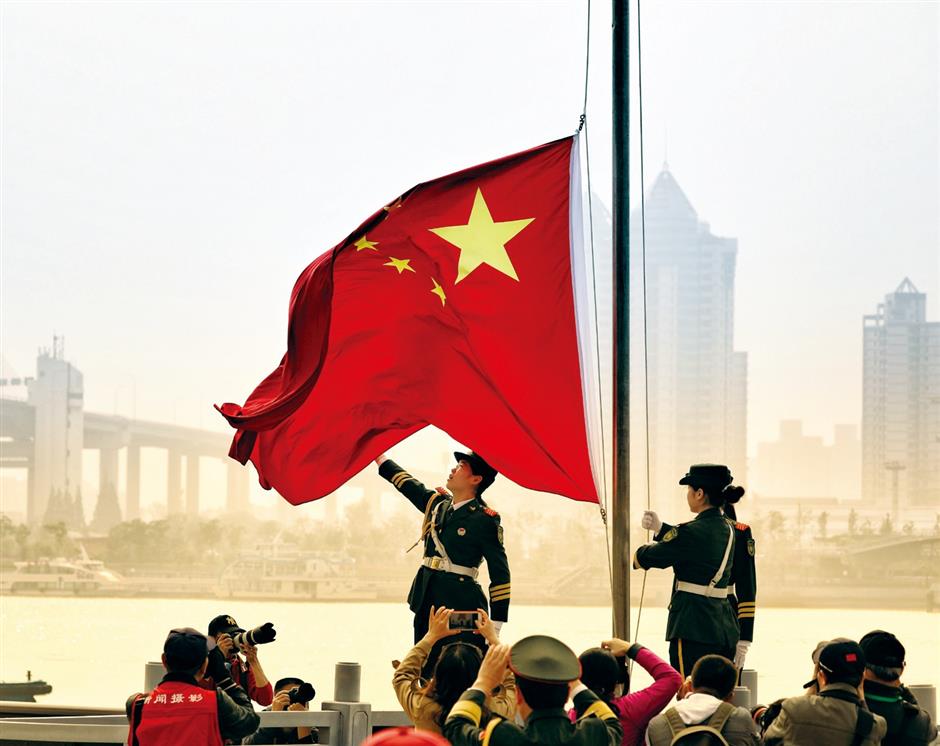 China’s national flag is raised by the Huangpu River in tune to the national anthem.

The Jindun (golden shield) band of Nanjing traffic police and the Police Officer Orchestra from Huzhou in neighboring Zhejiang Province performed the Chinese national anthem, “March of the Volunteers,” as the national flag was raised by the Huangpu River in Yangpu District on Wednesday morning.

A major event of the annual Shanghai Spring International Wind Music Festival running through last Saturday, the ceremony was held in the Binjiang waterfront where many industrial heritage sites showcase the historical past while nurturing the future.

This year’s festival was also part of the celebrations of the 70th anniversary of the founding of the People’s Republic of China and the 100th anniversary of the May Fourth Movement. Hence, patriotism is the theme of a series of activities, including concerts and parades, which coincided with the four-day May Day holiday. 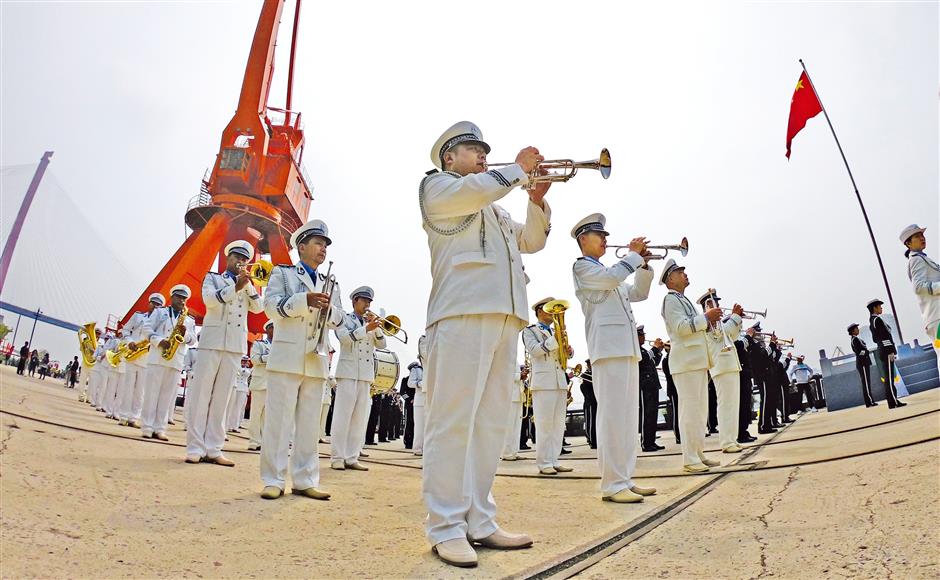 The Police Officer Orchestra from Huzhou, Zhejiang Province, perform the Chinese national anthem, “March of the Volunteers,” in the Binjiang area of Yangpu District on Wednesday morning, the opening day of the annual Shanghai Spring International Wind Music Festival.

At the flag-raising ceremony, the poem “Eternal National Anthem” was read out, along with verses of “From Shikumen to Tian’anmen,” by Ding Jianhua reflecting the spirit of generations of revolutionaries.

Hosted by Yangpu District, the program featured more than 8,500 performers.

Pipers, drummers, dancers and fiddlers from the Royal Edinburgh Military Tattoo provided a stunning performance of Scottish music and highland dance in Binjiang on Wednesday morning.

The wind band of Shijiazhuang water supply and drainage company has partnered with the Shanghai Spring International Wind Music Festival for many years.

The band has performed in countries including Germany, France and Oman, demonstrating the musical talent of Chinese workers.

At the opening ceremony on Wednesday night, the wind band of Sichuan Conservatory of Music performed “New World.”

The wind band of Nambu Junior High School from Noda, Chiba, Japan, performed the popular “Light up the Future.”

Musicians from SMJK Ave Maria Convent from Ipoh, Malaysia, played “My Time, My Feel, My Mind.” The orchestra has been in existence for more than four decades, but their style remains modern and up-to-date.

The Shanghai Spring International Wind Music Festival was inaugurated in 2008 and has been held every year since.

“More than one million people have enjoyed performances at the festival since 2008 and some 50,000 musicians from 800 bands of 23 nations and regions have taken part, making it one of the biggest events of its kind in China,” said Yang Yinyu, director of the Yangpu District Culture Bureau, one of the organizers.

It has become an important cultural event in the city. Previous activities have won wide praise, mainstream media coverage and the enthusiastic participation of citizens.

During the carnival, performances were held at landmarks, communities and industrial parks to benefit more people, demonstrate urban spirit and set up a good image of the city as a global culture hub. 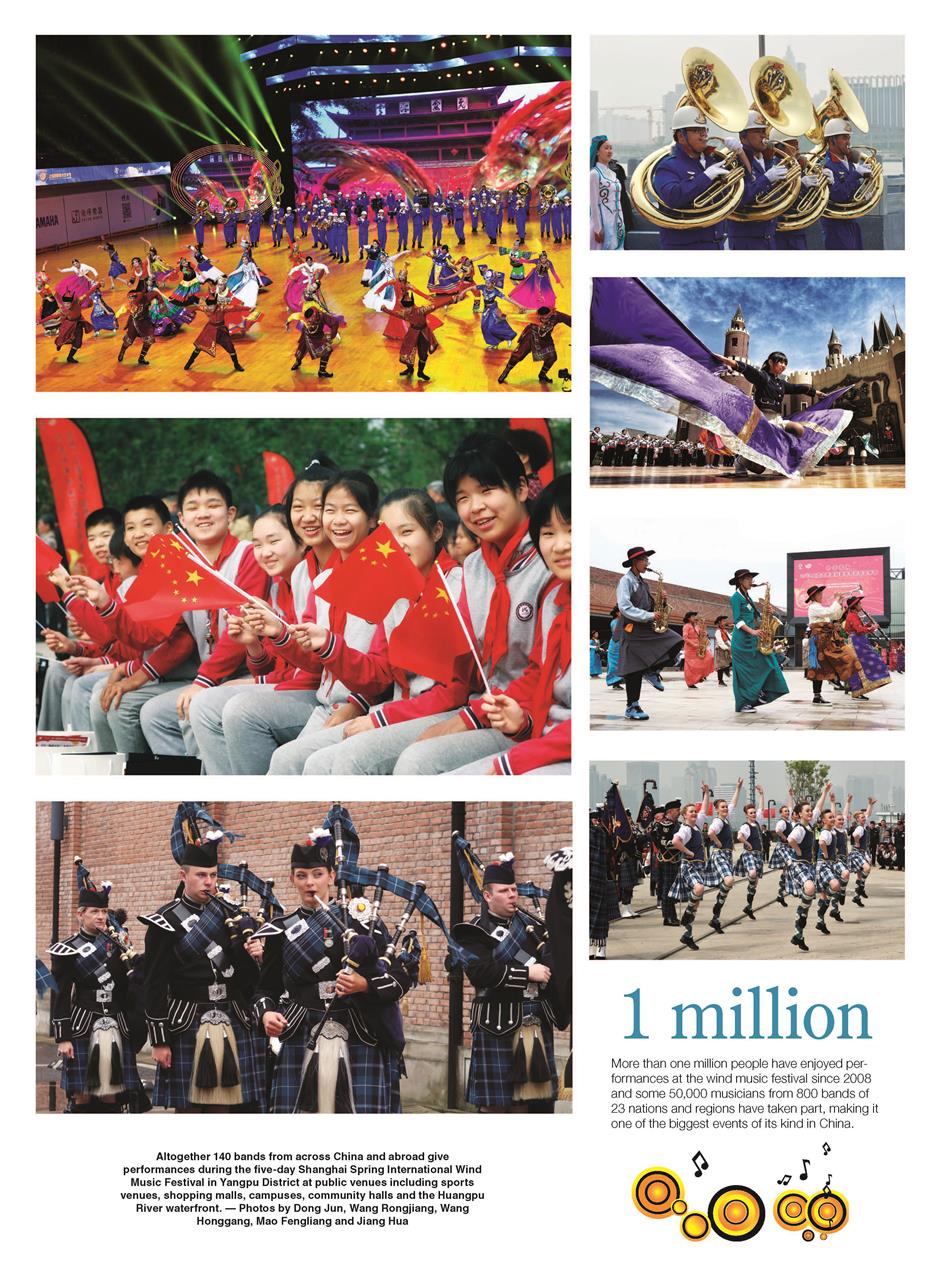