National anthem sung back where it began 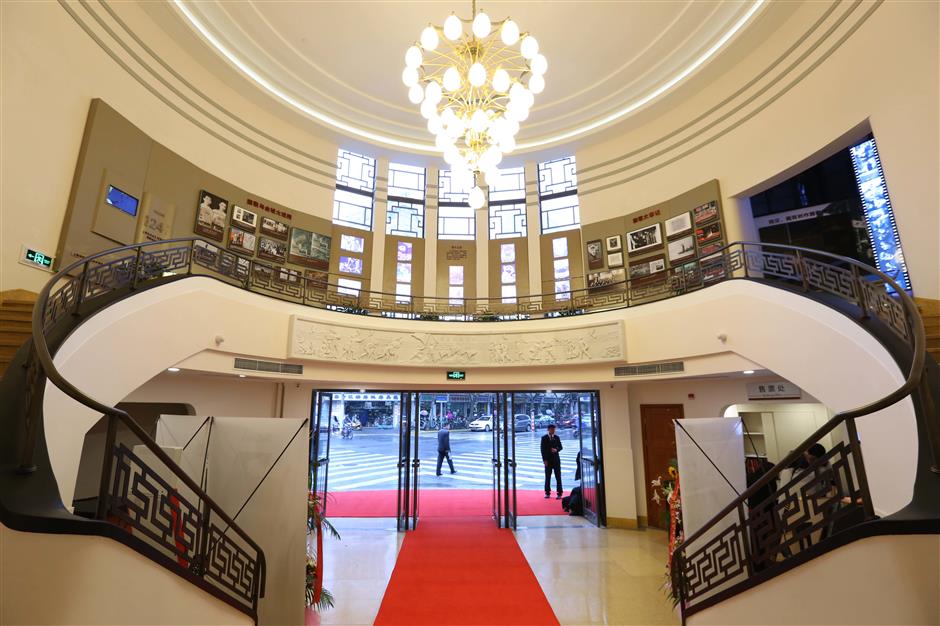 The main hall of the Huangpu Theater at 780 Beijing Road E., formerly the Lyric Theater where China's national anthem "March of the Volunteers" was first played on May 24, 1935

China's national anthem "March of the Volunteers" was sung at the Huangpu Theater on Friday, 84 years to the day it made its debut there.

"National Anthem," a musical presented by Shanghai Opera House about how the song was composed by Nie Er (1912-1935) with lyrics by Tian Han (1898-1968) launched its nationwide tour at the theater. It will be performed in 10 cities across the country to mark the 70th anniversary of the founding of the People's Republic of China and liberation of Shanghai.

The tour aims to promote patriotism and undaunted spirit of the early reformists as well as Shanghai's authentic culture, according to the Huangpu District government.

On May 24, 1935, “Children of the Clouds” had its premiere at the theater at 780 Beijing Road E., then known as the Lyric Theater, and its theme song, "March of the Volunteers," later became the Chinese national anthem.

Nie died only months later in an accident in Japan at the age of 23. His memorial service was held in the theater. 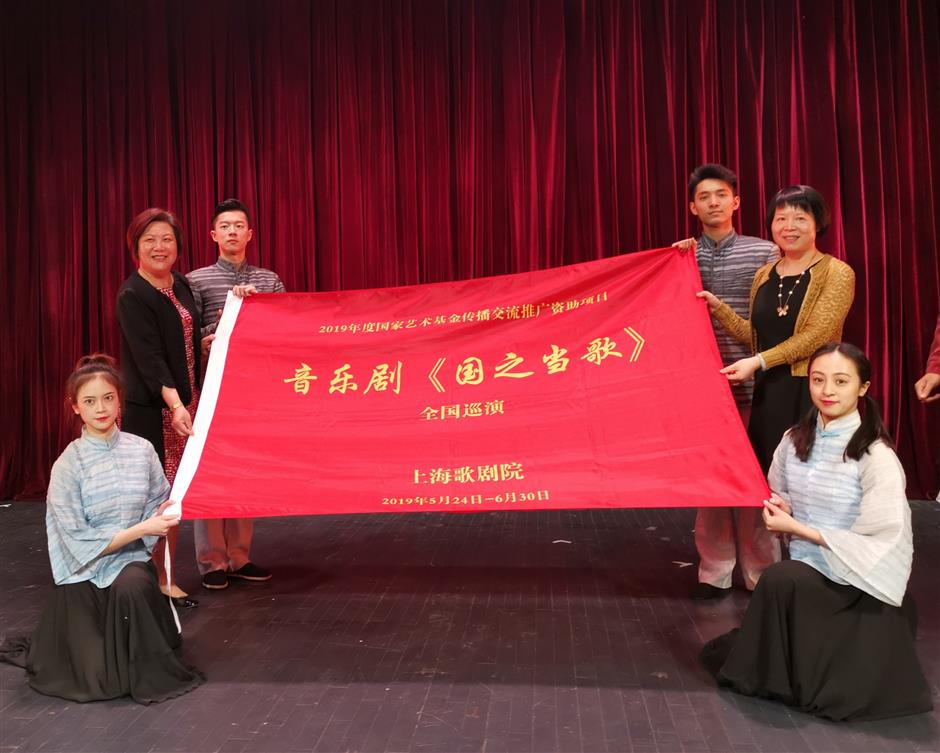 A flag is presented to the main cast of new musical "National Anthem" to mark the beginning of a nationwide tour of the Shanghai Opera House production. 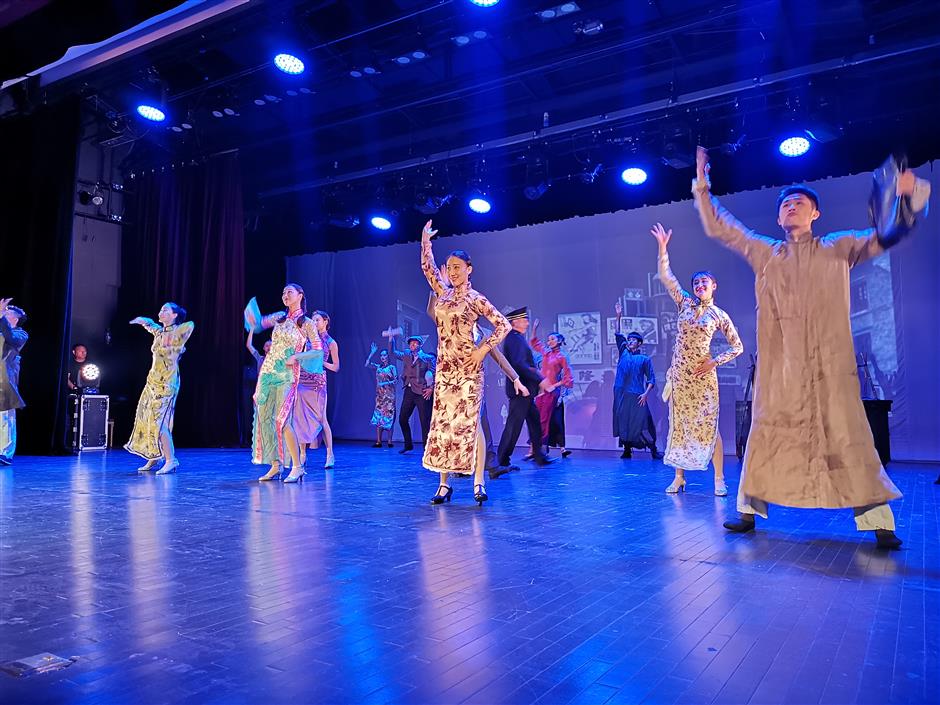 The musical "National Anthem" presented by Shanghai Opera House is performed at the Huangpu Theater on Friday.

After 1949, the theater specialized in staging Huaiju Opera, a genre originating in neighboring Jiangsu Province that was popular in Shanghai at the time. In 1957 the Lyric Theater was renamed Huangpu Theater by Premier Zhou Enlai.

The theater was renovated in 2016 with the facade and historical details preserved but the original auditorium was divided into two smaller theaters to suit small-scale dramas, musicals and children’s dramas. Over 400 dramas and musicals are performed at the theater every year.

Tian Gang, Tian Han's grandson, and Wang Shuyuan, a senior artist and former member of the Xin'an Touring Troupe, predecessor of the opera house, presented a flag to the main cast of the musical along with officials to mark the beginning of the tour.

"We will perform at the revolutionary bases such as Jinggangshan in east Jiangxi Province, Yan'an in northwest Shaanxi Province, Tian Han's hometown in Changsha in central Hunan Province and Beijing," said Li Ruixiang, composer and scriptwriter of the new musical.

Hundreds of nearby residents and students watched the opening session of the musical at the theater on Friday and sang the national anthem together at the end of the show. 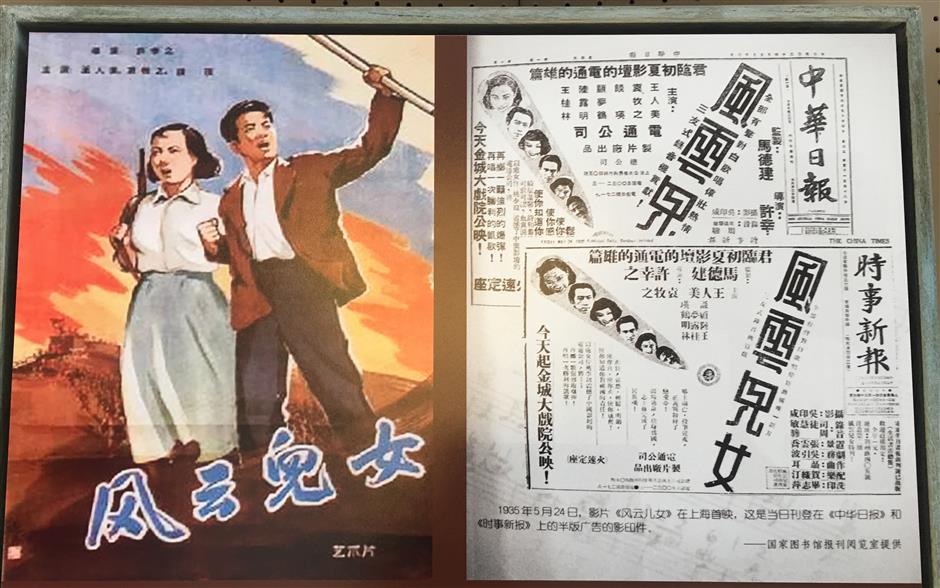 A poster and reports of “Children of the Clouds” which had its premiere at the Huangpu Theater in 1935. Its theme song, "March of the Volunteers," later became the Chinese national anthem.