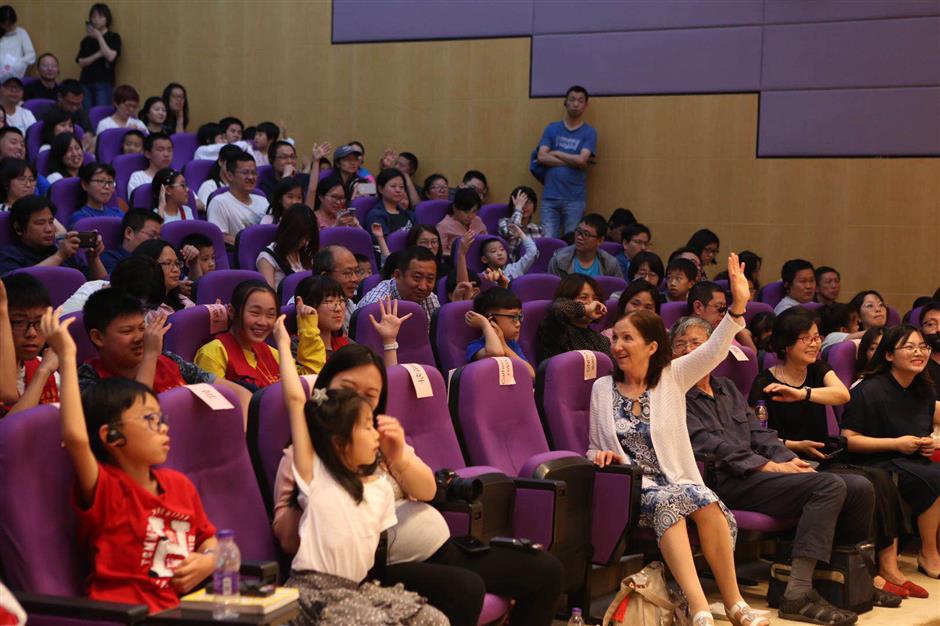 Jane Hawking, first wife of late astrophysicist Stephen Hawking, sits among local children as she interacts with them at the Shanghai Science and Technology Museum in the Pudong New Area. 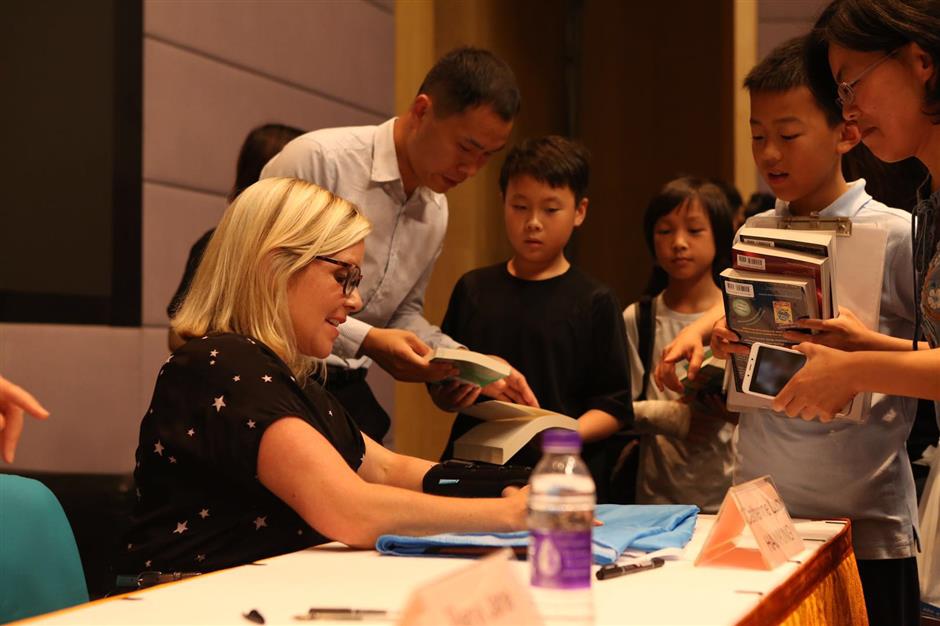 Some years ago, a boy asked late British astrophysicist Stephen Hawking: “What would happen to me if I fell in a black hole?” “You’d be turned into spaghetti,” Hawking replied in a simple and smart way as he explained the super gravity of a black hole.

His words, on this occasion, made the black hole concept completely clear to children. He also inspired his daughter Lucy, a journalist and author, to make the science narrative accessible to children. She came up with the idea of writing children's stories, in which her father put in an accurate scientific description of the universe.

The two joined hands on five of the six adventure novels of the “George” book series. After her father died in 2018, Lucy managed to finish the last novel by herself.

On Sunday, Lucy and her mother Jane, the first wife of the noted scientist, came to the Shanghai Science and Technology Museum. They recalled moments with their beloved Stephen and introduced the books to Chinese children.

The duo had long anticipated their trip to China. Lucy has some Chinese blood as her great-grandmother is from Ningbo City of Zhejiang Province. Also, in 2002, Hawking was honored a honorary professor of the reputable Zhejiang University.

Lucy said her father had paid a visit to China in 1985, and she had been waiting to visit Shanghai since she was 7 when she first read a book about the city. She said she will visit Ningbo after her Shanghai tour and plans to write a book about Shanghai.

According to Lucy, she grew up with a group of scientists and their children, and, though she didn’t become a scientist, science is deeply rooted in her life. Even her name, Lucy, actually means “light” in Latin, and light has a lot of meaning and importance in physics.

The “George” book series features the space adventures of George; his best friend Annie, daughter of scientist Eric, a character supposedly based on Hawking; and the super-intelligent computer called Cosmos. During their expeditions to the Mars, Jupiter and other planets, the mysteries of the universe, such as the origin of life, black hole and artificial intelligence, are explained.

Lucy insists that the books are not only about her ideas but that it was her father's dream to popularize science to children across the world. The books provide a key for children to unlock the mysteries of the universe, she said, adding that she will continue her work on science education.

Talking about science education, Lucy said she is impressed by the progress made by Chinese scientists in recent years. She also praised Shanghai for doing a great job in spreading education about science.

Meanwhile, her mother Jane is an author in her own right though she came to more people's notice thanks to “The Theory of Everything,” a 2014 film describing her relation with Hawking based on her memoir “Travelling to Infinity: My Life with Stephen.”

“It was emotionally very true to life,” Jane said.

She said she became interested in Hawking during middle school when he was a friend of her friend’s brother. She was impressed by his unkempt hair and brilliant wisdom, and the two fell in love. Though he was diagnosed with motor neurone disease, also known as amyotrophic lateral sclerosis, Jane still married him.

Hawking sought to explain some of the most complicated questions of life.

A major area of his research was into black holes, dark matters in the universe where gravity is so strong that nothing, not even light, can escape. He put forward “Hawking radiation” in 1974, implying that black holes will finally die.

His death in March 2018, at age 76, however, meant that he could not see the world’s first close-up of the black hole that was revealed in April this year.

However, his voice has been beamed into space, sending a message of peace and hope, heading toward a black hole approximately 3,500 light-years from the Earth. His voice was accompanied by the music of Greek composer Vangelis.

Hawking's ashes were interred near the grave of two other legendary figures, Isaac Newton, the great discoverer of gravity, and Charles Darwin, who devised the theory of evolution, among others at Westminster Abbey in London.