At the grassroots, old habits die hard as trash-sorting becomes a reality

The massive campaign to teach Shanghai residents how to sort their garbage and dispose of it in designated bins at neighborhood trash stations hasn’t been easy. Old habits die hard.

Shanghai Daily reporters headed for residential complexes to see how the new system is faring just days ahead of the July 1 implementation of strict new regulations. They found mixed results.

The Lianyang community in the Huamu subdistrict in Pudong, which has a population of about 50,000, includes some 8,000 foreigners from 78 countries.

At the Dangdai Qingshuiyuan complex on Fangdian Road, plastic express-delivery bags were spotted in a bin designated for wet, or kitchen, waste.

The only signs in English were those delineating the four types of wastes --dry, wet, recyclable and hazardous. No other English instructions were in evidence.

At another residential complex, Zhongbang Fengyasong on Dingxiang Road, mixed trash was found inside a bin for dry rubbish. It included orange peels, food leftovers, rotten vegetables and eggshells inside plastic bags.

Clean polyfoam, which should be recyclable, was also found inside the bin.

Again, only signs designating the various bins were in English.

At another residential complex on Lane 901, Dingxiang Road, a paper bag and a bottle were spotted inside a bin for hazardous waste, and plastic bottles were seen inside a bin for wet waste.

"We have been promoting the new regulations in bilingual schools, but the effect hasn’t been satisfactory so far," said an official with the Huamu sub-district, who declined to be identified. 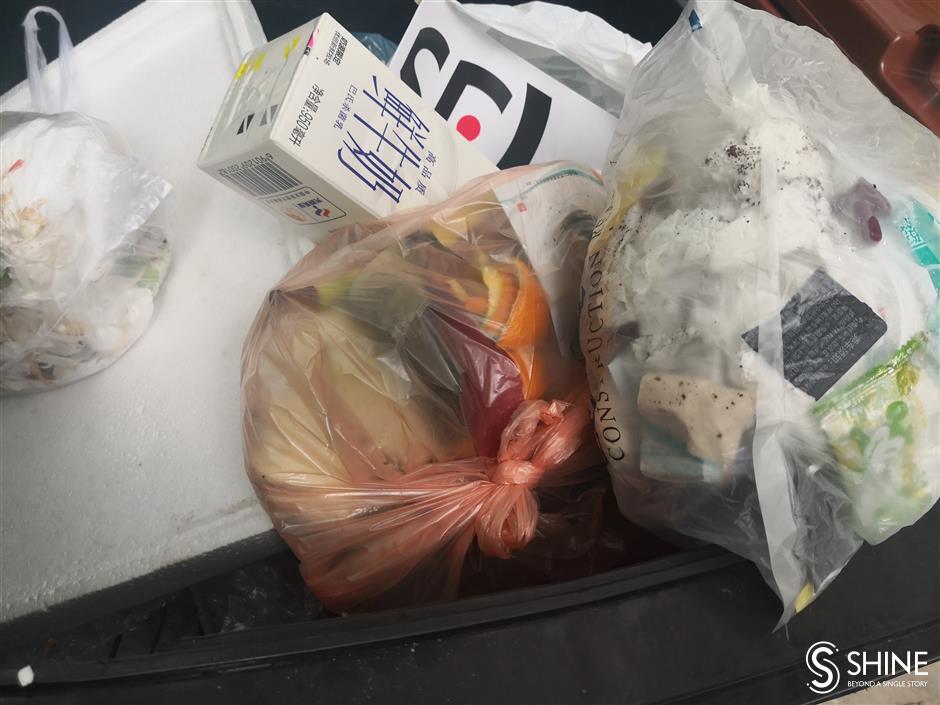 At Zhongbang Fengyasong residential complex on Dingxiang Road, mixed trash is seen inside a bin for dry rubbish. 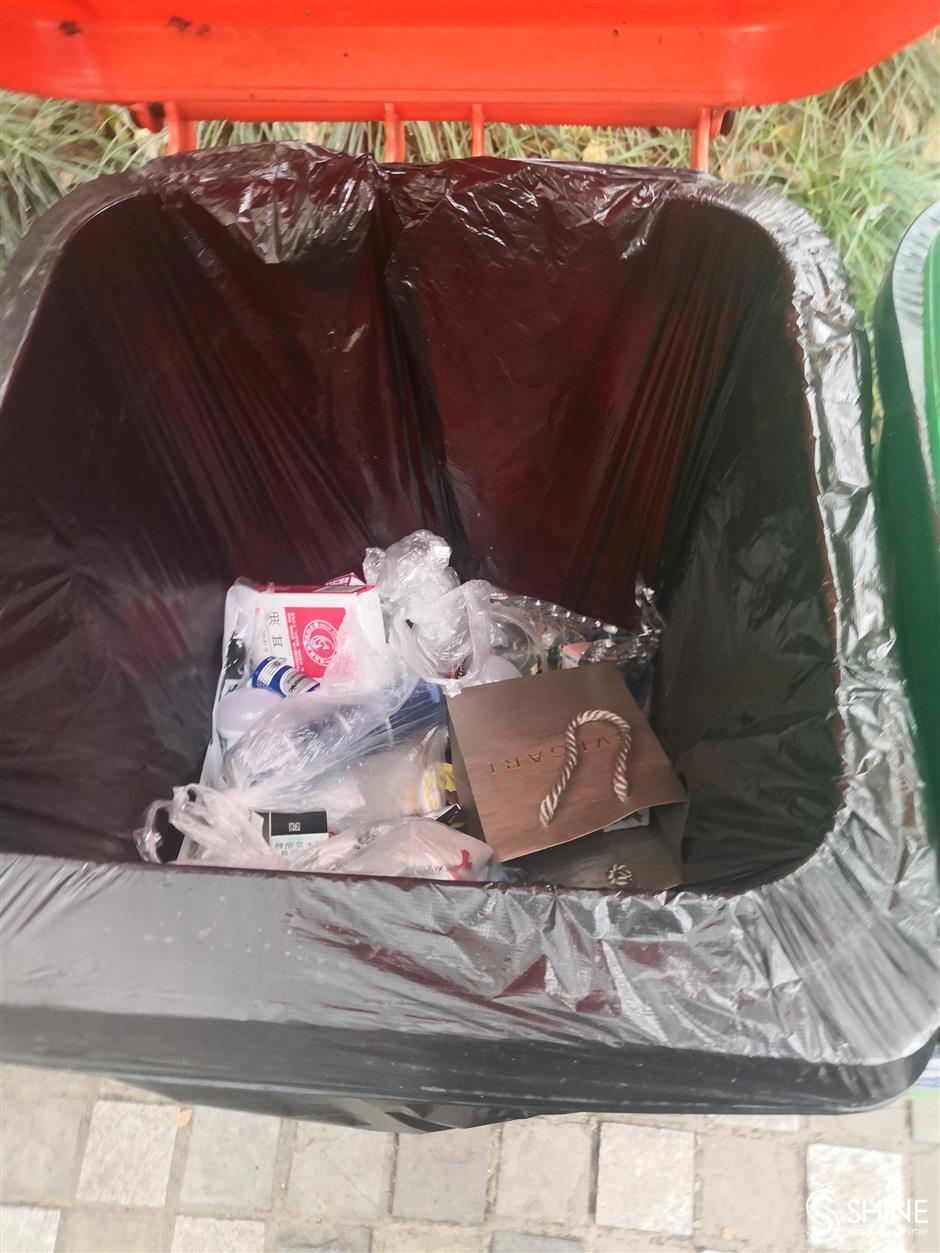 At a residential complex on Lane 901, Dingxiang Road, a paper bag and a bottle are spotted inside a bin for hazardous waste. 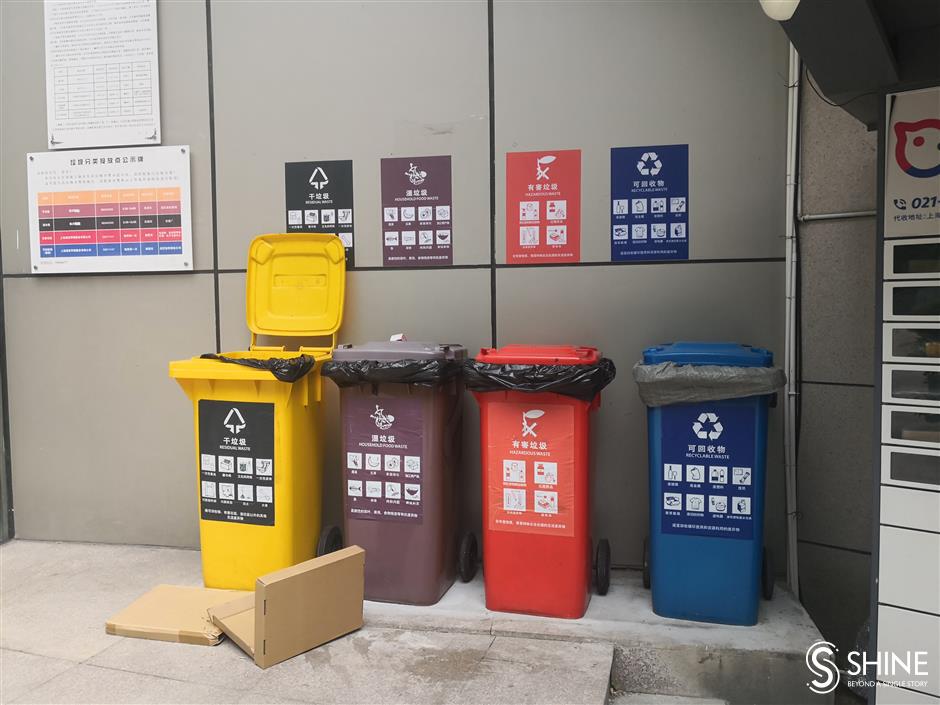 At the Dangdai Qingshuiyuan complex on Fangdian Road, the only signs in English are those delineating the four types of wastes --dry, wet, recyclable and hazardous. Paper boxes are dumped on the ground.

The Biyun International Community in Pudong, one of the largest multinational communities in Shanghai, has 19 residential complexes and a resident population of 14,000, including more than 7,400 foreigners.

Even though many residents have begun to sort their waste, there was still evidence that sorting facilities and resident awareness need improvement.

In the Jinqiao Biyun Garden complex, all the apartments come equipped with two large garbage bins, without any sorting labels or instructions.

Some garbage bags were simply thrown on the ground. The same bag may contain both food waste and recyclable plastic bottles. One of the bags has been bitten open by stray cats, leaving chicken bones and vegetables scattered all over the ground.

When the reporter randomly asked several foreign residents about the new garbage classification system, they either said they weren’t familiar with the regulations or they refused to respond. 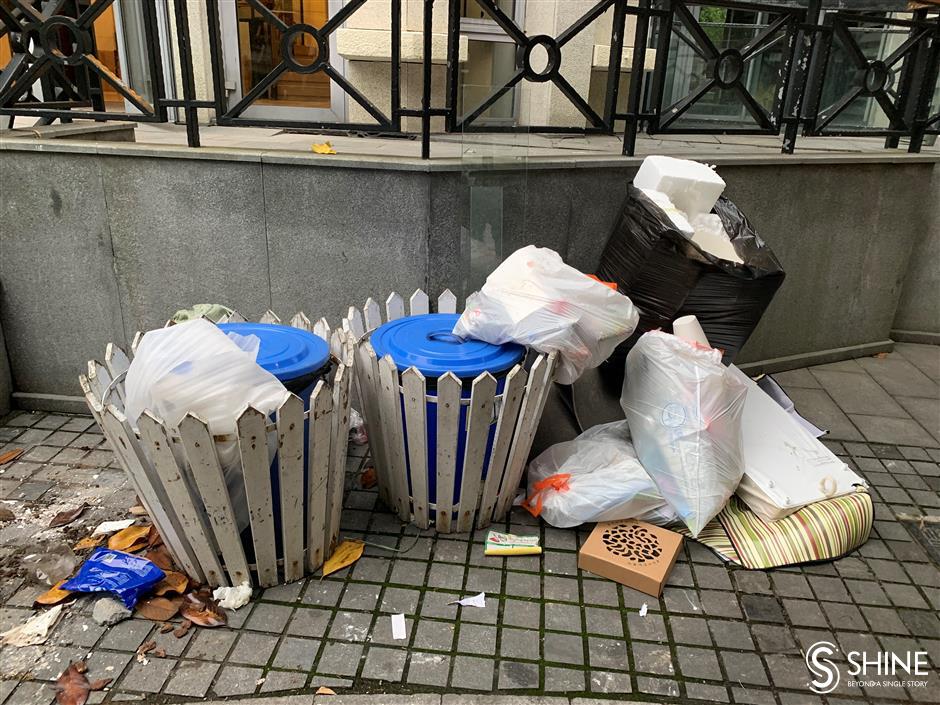 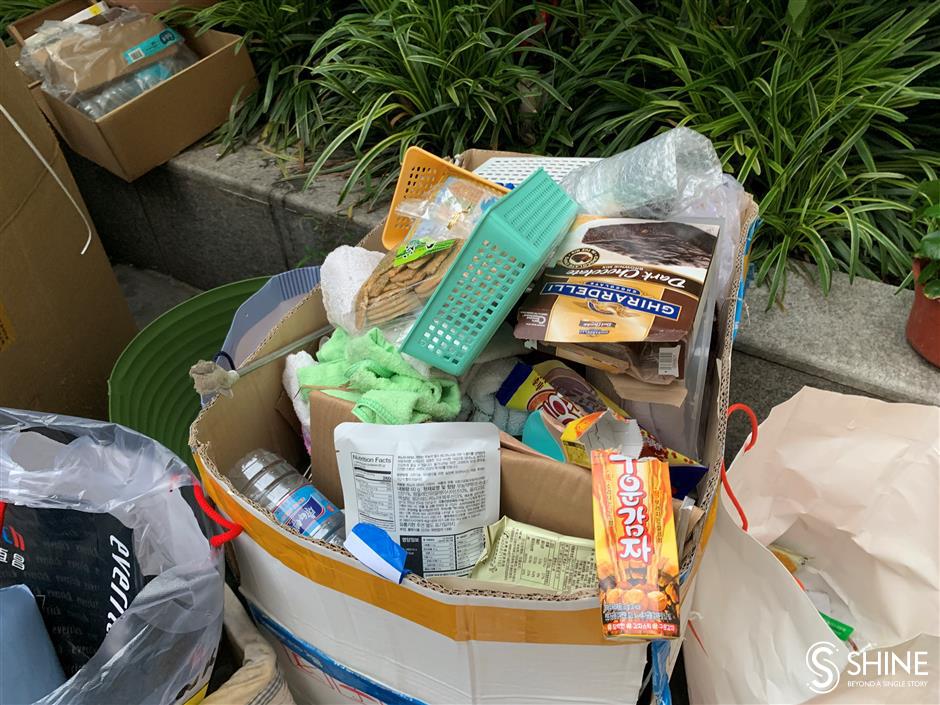 One of the misclassification of garbage in Biyun Villa 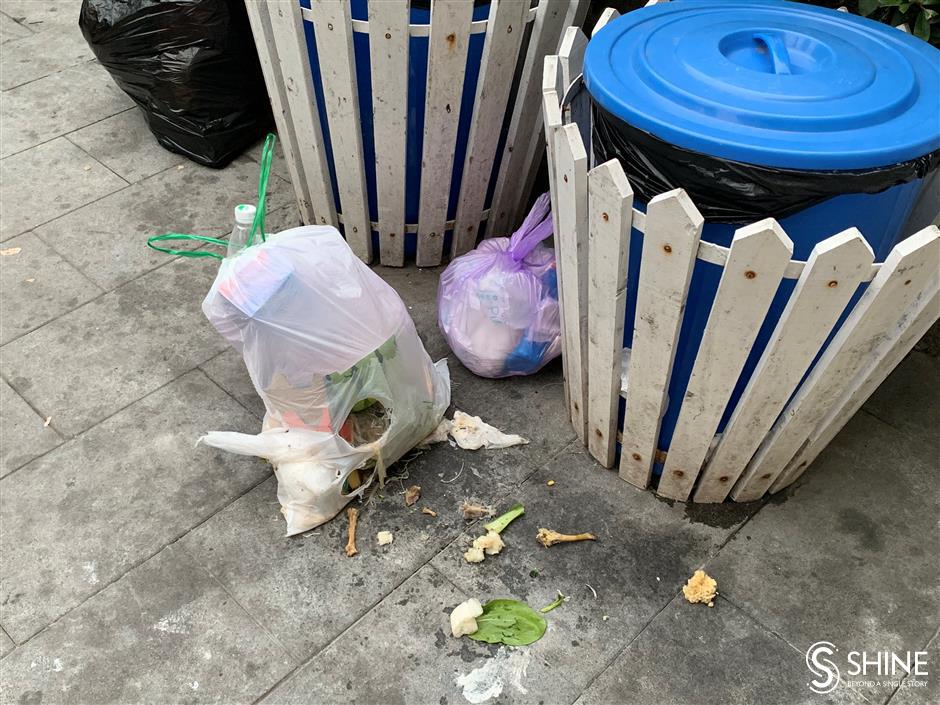 The garbage is scattered all over the ground in Biyun Garden.

“In our complex we don’t have enough of these new garbage bins, and when I wanted to throw my batteries into the right container, it was full of household waste," said Danja, a German living in Biyun. “Our building has no garbage cans at all. The old ones were taken away a few days ago, and now I have to walk to a different building to throw out the garbage."

She added, "I have not read the complete garbage-classification rules, but they seem extremely detailed. I heard others say that wet kitchen waste has to be disposed of without garbage bags. That seems extremely messy to me, and in the summer, it would attract a lot of insects."

An official with the Biyun community, who also declined to be identified, said there has been heavy promotion of the new regulations in international communities.

“We have hosted information seminars and organized activities for expats to practice waste sorting," she said. "Expats are very willing to sort trash, but they don’t have enough bins when they take garbage out. We need to make improvements."

Celine, who hails from France, said "I don’t think it has been clearly enough explained to locals, and for expats, it is even harder. It’s easiest for expats who got in the habit of recycling in their hometowns."

It’s all a question of habit, she added.

"I am not sure whether we are exactly right on how to separate trash,” she said, “but I guess I better learn quickly because I hear that fines may be levied.”

Indeed, starting on July 1, all residents, both local and expat, will be subject to fines of up to 200 yuan (US$29) if they fail to sort garbage and dispose of it correctly, according to the Shanghai Urban Management and Law Enforcement Bureau. 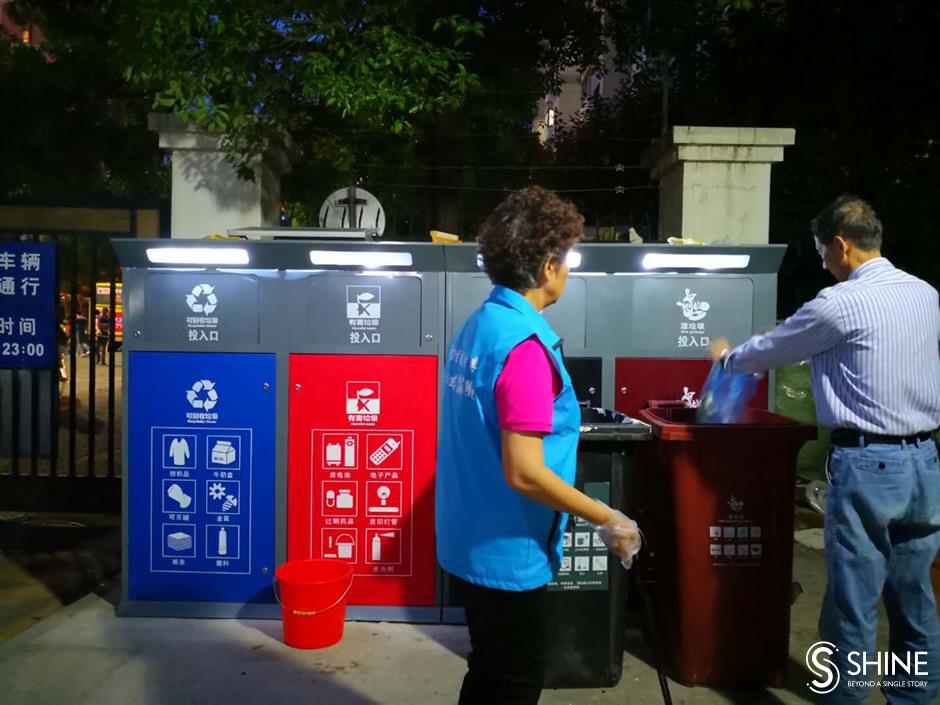 A volunteer looks at a resident damping wet waste into the right bin at Shanghai Chuncheng residential complex in Minhang District.

In the Shanghai Chuncheng residential complex in Minhang District, which contains about 3,000 households, people now have to dump their trash at fixed rubbish disposal sites.

Garbage bins originally put in front of each building were removed on June 11, and six waste stations have been set up, with bins for each of the four types of trash.

Volunteers are deployed at each site to check that residents are properly sorting garbage. Some of the sites are open from 7-9am and 6:30-8:30pm every day.

Loudspeakers are used between 6-7pm to remind residents to separate their garbage at home. It seems to be working.

A Shanghai Daily reporter saw local residents carrying trash bags to the disposal site one evening, some with their children.

“My daughter and I come here to take our sorted garbage out every evening,” said a father surnamed Xu. “I support the garbage-sorting rules because they will improve our environment. I want my daughter to form the habit of garbage sorting so it will be easy for her when she grows up.

Another resident surnamed Chen confessed that the changes were initially inconvenient.

“There used to be two bins in front of our apartment building, so we only had to take the lift down and drop the bags there,” he said. “Sometimes I came down in my pajamas because the task was so quick. But now, I have to put on clothes suitable for being seen in public because the nearest garbage disposal site is 300 meters away and there are volunteers and other people there.”

But, he added, “If we have to sacrifice to make the world a better place, so be it.”

When an old man opened his plastic bag and dumped his kitchen waste into the correct bin, a volunteer stopped him and told him the leaves used to wrap zongzi, a rice snack popular during the Dragon Boat Festival, are considered dry waste and didn’t belong in that bin.

“I sorted according to the leaflet sent to my home, which put leaves under the category of wet waste,” he snapped. “Why are you saying it’s wrong?”

Other residents were unhappy about the requirement that they pour the contents of wet trash bags into the bins, soiling their hands. 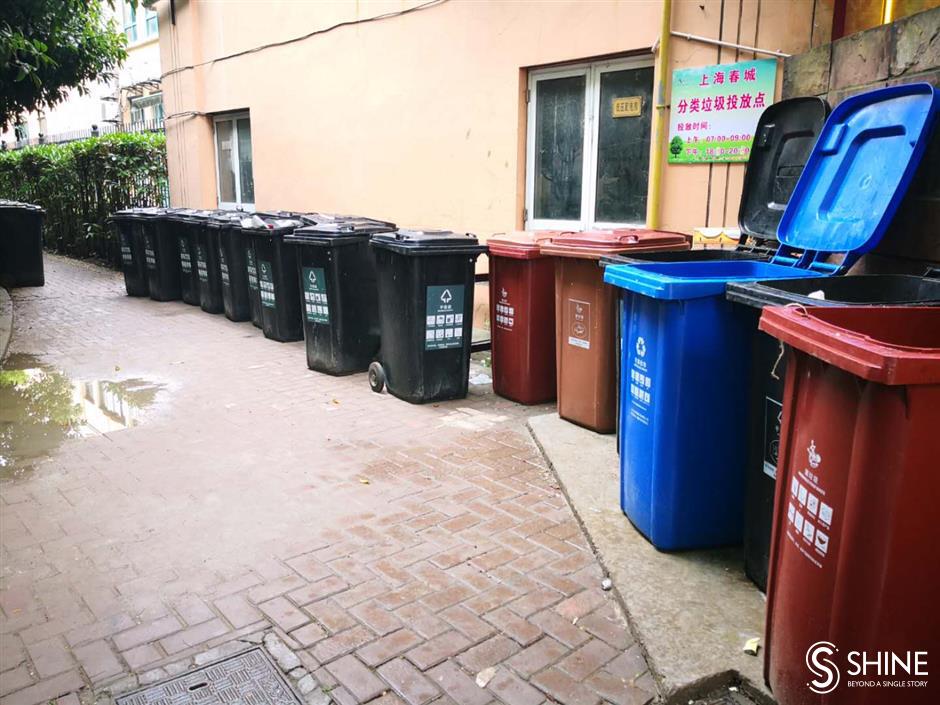 Another garbage station at Shanghai Chuncheng

A neighborhood community official surnamed Zhang told Shanghai Daily that efforts have been made to make garbage sorting as convenient as possible.

Shanghai Daily saw a pair of scissors on top of a bin but didn’t see them used as more than 10 residents came to empty their wet waste.

Zhang said residents in the complex are relatively willing to follow the new rules, but there are complaints and even quarrels sometimes arise.

“It’s still in its initial stages,” she said of trash sorting. “Many people are not familiar with the classification standards. But when they are shown the proper way, they usually do it right the next time.”

Noise and odors from the disposal sites often irritate nearby residents.

“There are a lot of people who come and go, and our volunteers need to tackle residents who aren’t doing things correctly. So, yes, it can be noisy,” Zhang said. “And when wet waste piles up, it can emit an unpleasant smell. We remind our volunteers to lower their voices and get the bins emptied as quickly as possible.”

She said the whole complex now produces about 30 bins of wet waste every workday and 40 bins every Saturday and Sunday.

A garbage collector surnamed Feng said she is called every time a bin is filled up.

“Previously, I emptied the bins one by one during the whole day and there was no need to hurry,” she said. “But now, I have to rush out to the disposal site frequently, especially in the mornings and evenings when people all come to dump waste.”

One woman, who identified herself only as Nicole, told Shanghai Daily that the property management company should not have relocated trash bins away from the buildings. Rather, more bins should have been placed in front of each building so that residents could dispose of their garbage more conveniently.

“Most of our volunteers are retired people,” she said. “We wish more young people would join us because they have creative thinking.” 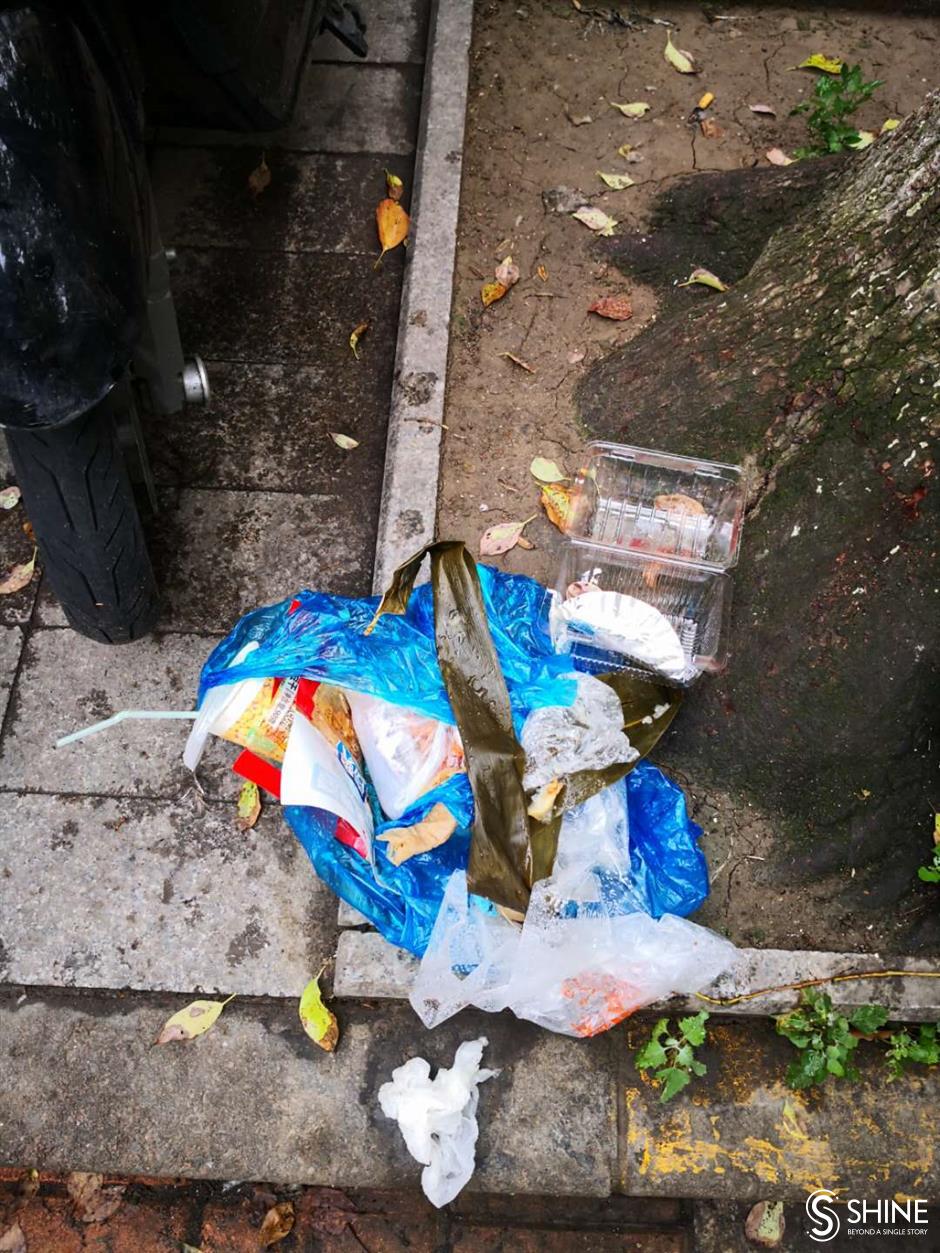 Some people still leave trash at places where trash bins were originally put .