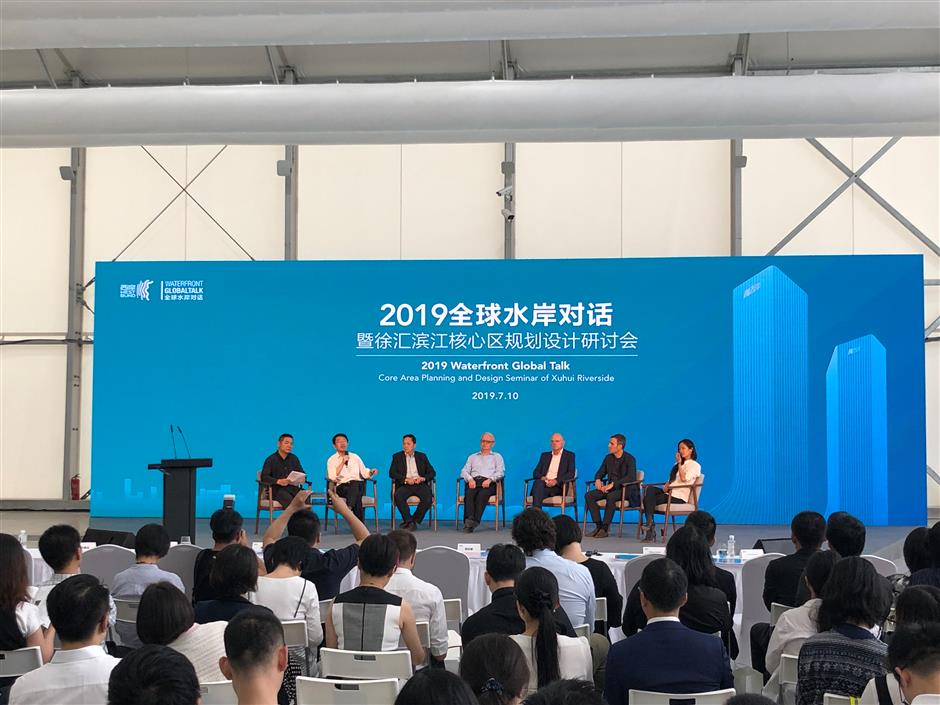 Experts and designers from both home and abroad share opinions for the development of the West Bund waterfront at the 2019 Waterfront Global Talk seminar.

Ideas from global design firms have been solicited to further develop the West Bund waterfront along the Huangpu River and make it on a par with the famous riversides of, for example, Sydney, London and Paris.

Sidewalks stretching 45 kilometers on the banks of the Huangpu between Yangpu and Xupu bridges have opened. The city now plans to extend those upstream and downstream while improving the section already open.

The riverside areas of Xuhui District, known as the West Bund, features 11.4 kilometers of waterfront that was once home to the city’s earliest iron, coal, grain and oil industries. The waterfront opened to public at the end of 2017 along with other sections of downtown riverbanks.

The waterfront also hosts the annual World Artificial Intelligence Conference and has been planned into an Intelligence Valley gathering high-tech headquarters and labs for AI industries.

The Xuhui District government plans to further develop the core waterfront area into a central activity district for Shanghai’s 2035 masterplan as well as a “world-class sitting room,” Yan told a planning and design seminar on Wednesday. 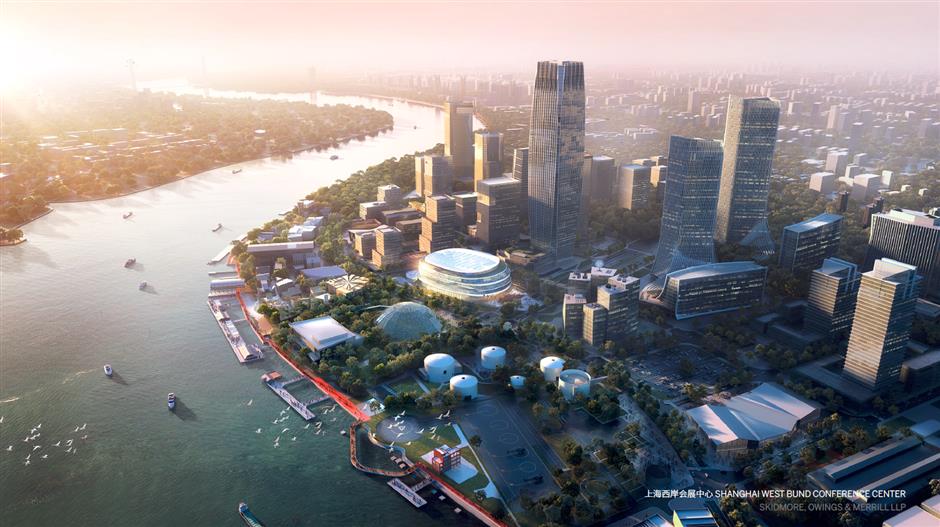 How the West Bund Conference Center and core section of the West Bund waterfront in Xuhui District might look in the future is seen in an artist's rendition.

Under a blueprint by US design studio James Corner Field Operations, the 2-kilometer West Bund waterfront will "activate" 100,000 square meters of cultural and commercial facilities from the industrial heritages and riverside regions.

Though the West Bund has become a popular landmark, the riverside area is narrow, fragmented and not easy to access. It is remote from public transport with a 15-minute walk to the nearest Metro Line 11 station, he said.

His projects — "West Bund Alluvium" and "Art Port" — feature skywalks, tunnels and pedestrian paths to connect the inland area with the riverside. “Balconies” have been planned along the renovated historical piers and boathouses, Corner said.

A floating stage has been designed where visitors can enjoy outdoor performances on the riverbank.

“The West Bund is similar to the London South Bank and Sydney’s waterfront which both use art and culture to revitalize the former industrial sites,” said Corner. His company also took part in the waterfront planning for these cities. 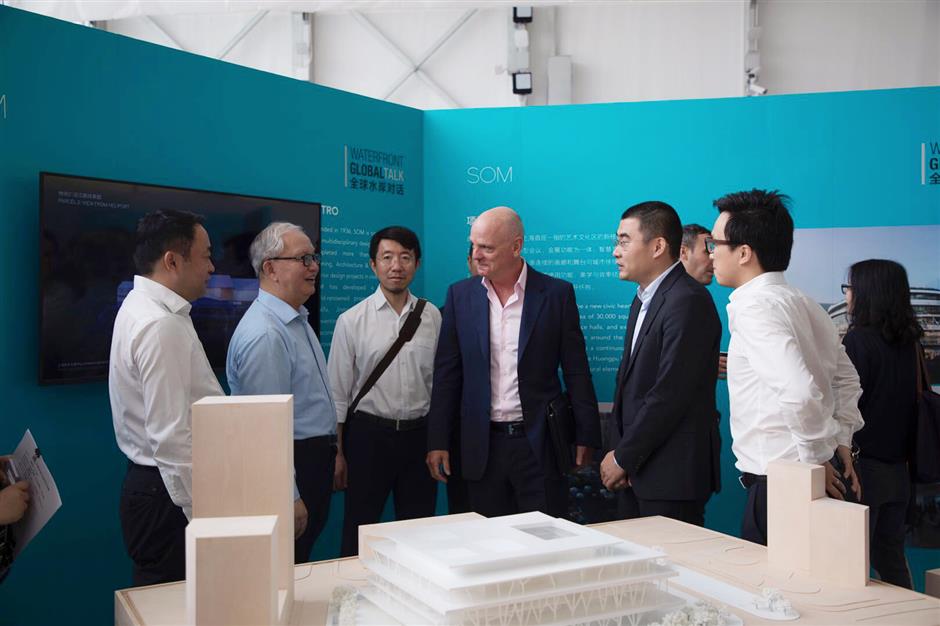 Zheng Shiling, (2nd left), an architectural expert and a member of the Chinese Academy of Sciences, share ideas with James Corner, founding partner and chief executive officer of the US design studio James Corner Field Operations at 2019 Waterfront Global Talk seminar on Wednesday.

Another US firm, Skidmore, Owings and Merrill (SOM), unveiled its design for a West Bund Conference Center, a 30,000-square-meter venue that will host the annual World Artificial Intelligence Conference in future.

AI will also be adopted for the glass curtain walls of the building that can automatically adjust transparency according to the city's sunshine and weather, Duncan said.

Danish design firm Bjarke Ingels Group (BIG), which designed the Denmark Pavilion at the 2010 World Expo in Shanghai, released its plan for the service and hotel projects.

One of the preserved aircraft hangars will be converted into a hotel resembling a peak, a vertical village or a green ribbon, said Catherine Huang, senior partner and chief designer.

Designers are suggested to leave some space for the West Bund to serve future requirements, Zheng Shiling, an architectural expert and a member of the Chinese Academy of Sciences, told the seminar.

Currently, the most urgent problem to solve is inconvenient transport, Zheng noted. The waterfront is accessible through the Longteng Avenue and the Yunjin Road Station of Metro Line 11 but Zheng said that was inadequate to attract visitors. 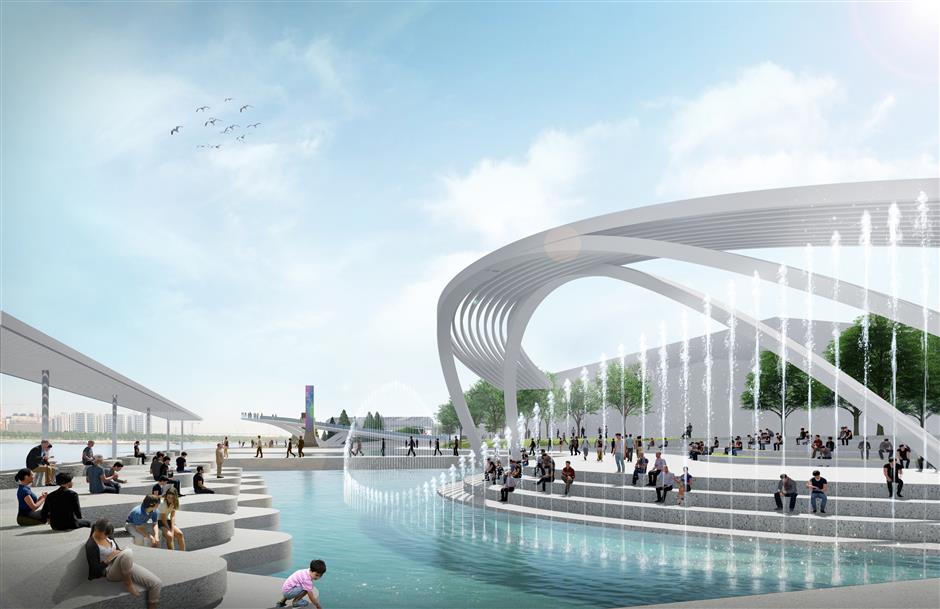 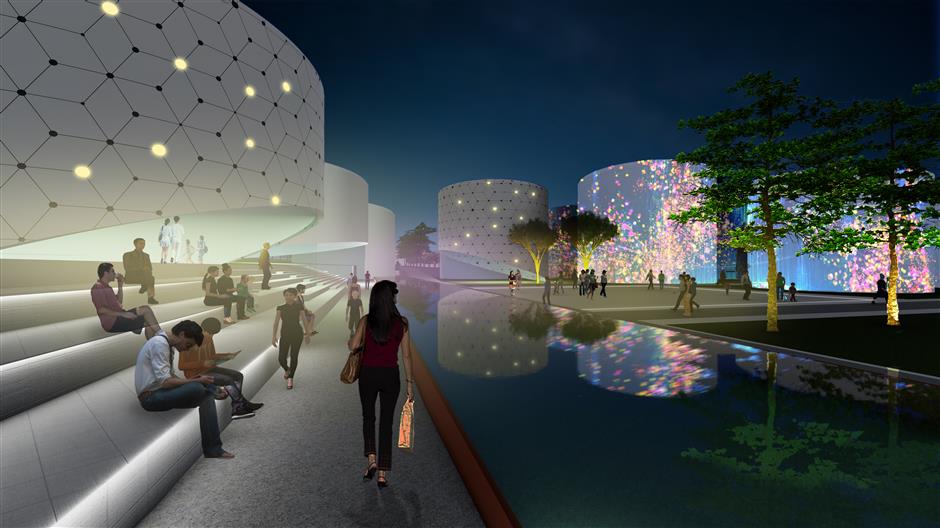