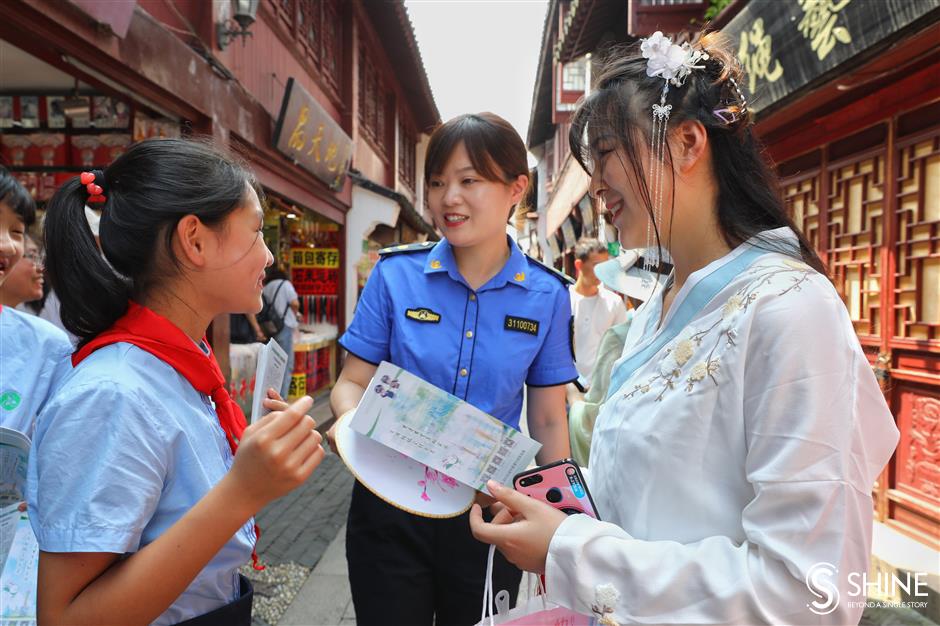 A student and an urban management and law enforcement official distribute waste-sorting material to tourists in Qibao. 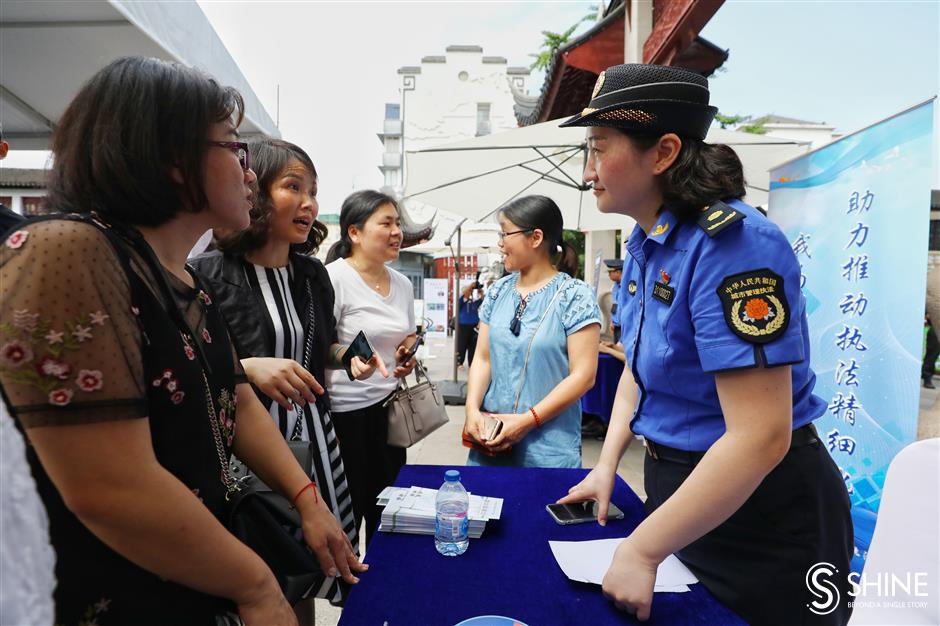 An official with the Qibao urban management and law enforcement team answers questions from residents.

Residential complexes have been better at sorting their waste than office buildings and businesses since Shanghai's waste management regulations came into force on July 1, a senior official said on Monday.

"We found that most residents are active in waste sorting in residential complexes," said Xu Zhihu, director of the Shanghai Urban Management and Law Enforcement Bureau.

"Our inspection results since July 1 reveal that residential communities have a better performance in garbage sorting than office buildings and businesses, which require improvement," he said. "We will step up inspections over enterprises and office buildings in the next phase."

Urban management and law enforcement authorities held a series of activities on Monday, aiming to create a platform for communication between residents and urban management inspectors.

About 6,000 officials took part at about 270 venues citywide.

"The theme this year is garbage sorting, and we want to guide people to form the habit of waste sorting via face-to-face communication with residents and push them to get involved in waste sorting," Xu said.

He said education and inspections combined to target waste sorting.

"Law enforcement is just an important means, and the final purpose is to supervise and push residents to sort trash," he said.

"If property management companies fail to set up separate containers for waste sorting at residential complexes, we will fine them, but we will also punish individuals who fail to sort trash correctly and refuse to put things right," said Xu. 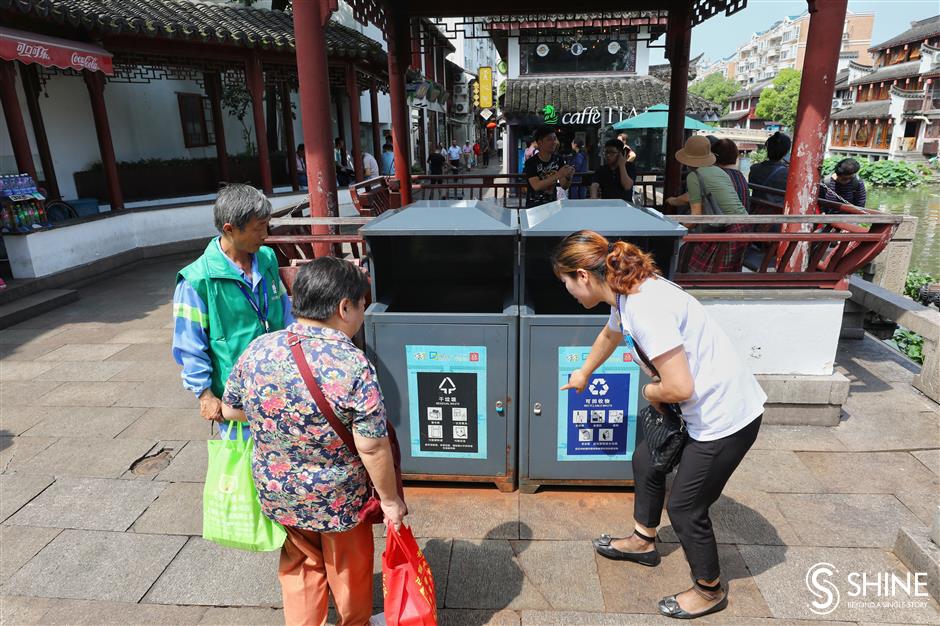 A worker with the Qibao management explains the new waste-sorting rules to a resident.

At Qibao in Minhang District, there were performances and competitions related to garbage sorting and officials held face-to-face consultations with residents over various urban management issues.

They were given to hotels, catering businesses and property management companies of apartment buildings after they were found failing to separate plastic bags and wet trash, said Fu Chunjun, an inspector with the team.

Qibao has a street where there are a large number of food stalls and eateries, attracting many tourists.

In most public areas in Shanghai, there are only bins for dry and recyclable waste as eating is not encouraged in public venues.

But in Qibao, bins for wet trash have been put in place given the real situation.

"We have put extra bins for wet garbage on the food street before July 1, and we arrange management staff to conduct patrols on the streets inside the tourist attraction, persuading tourists to drop garbage into right bins," said Fu.

"There are also volunteers and sorters to remind tourists to follow correct disposal, and staff with the water town management company will conduct second-time sorting if wrong dumping is spotted," said Fu.

"We mainly try to educate tourists if they are found disposing of trash wrongly, and there are also surveillance cameras to spot irregularities of trash sorting in the town," he said. 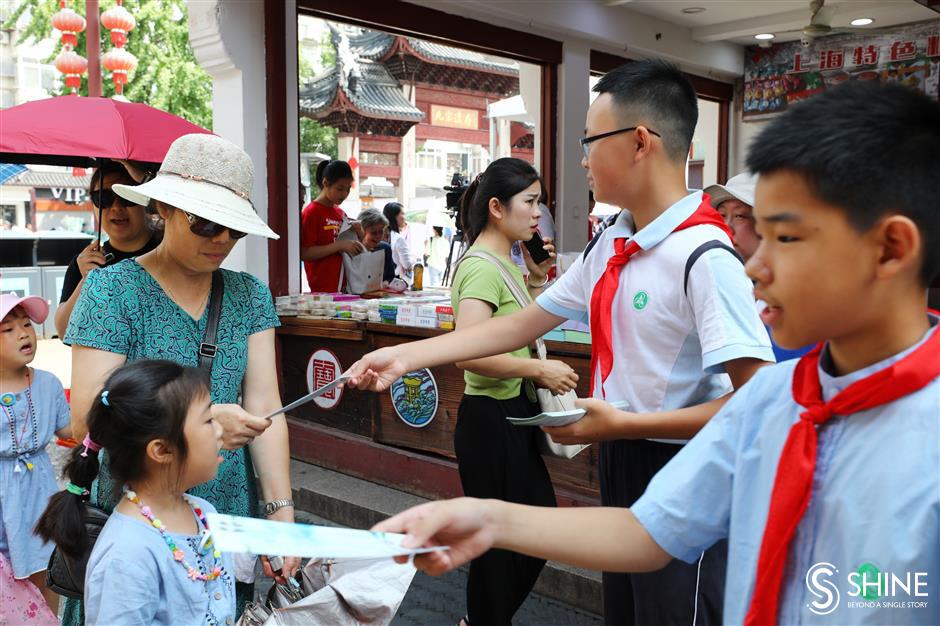 Students hand out leaflets about waste sorting to tourists in Qibao.

Some students also joined in the garbage-sorting promotion in Qibao by handing out leaflets to visitors.

"It is meaningful to promote trash sorting," said Jin Yutong, a 13-year-old student at Jingcheng Middle School in Minhang District. "Through education at school, we have formed a strong awareness on waste sorting." 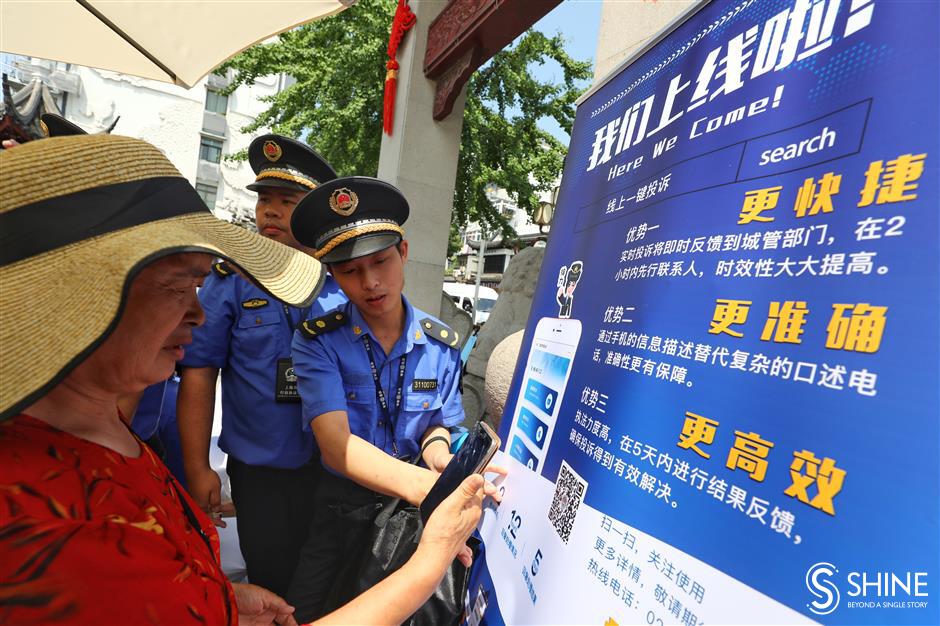 An official with the Qibao urban management and law enforcement team explains an online inquiry and tip-off platform to a resident.

Public satisfaction with urban management and law enforcement in the city rose to 82.50 in the first half of this year, 1.92 points higher than the second half of 2018, according to the results of a questionnaire.

There were more than 56,000 responses from residents, businesses, migrant workers and neighborhood committee officials.

"It is an important index for us to grasp the satisfaction rate of residents on the work of urban management and law enforcement," said Xu.

Hongkou, Xuhui, Huangpu and Jing'an districts scored highest among downtown districts in terms of urban management and law enforcement work, while Jiading, Minhang, Songjiang and Baoshan districts were the highest in the suburbs.

The Dapuqiao, Jing'an Temple and Xujiahui subdistricts were the highest among downtown subdistricts, and interviewees were most satisfied with urban management and law enforcement work in tourist attractions.

Parks and public green spaces, streetside businesses, and schools had the lowest score in terms of urban management and law enforcement work.