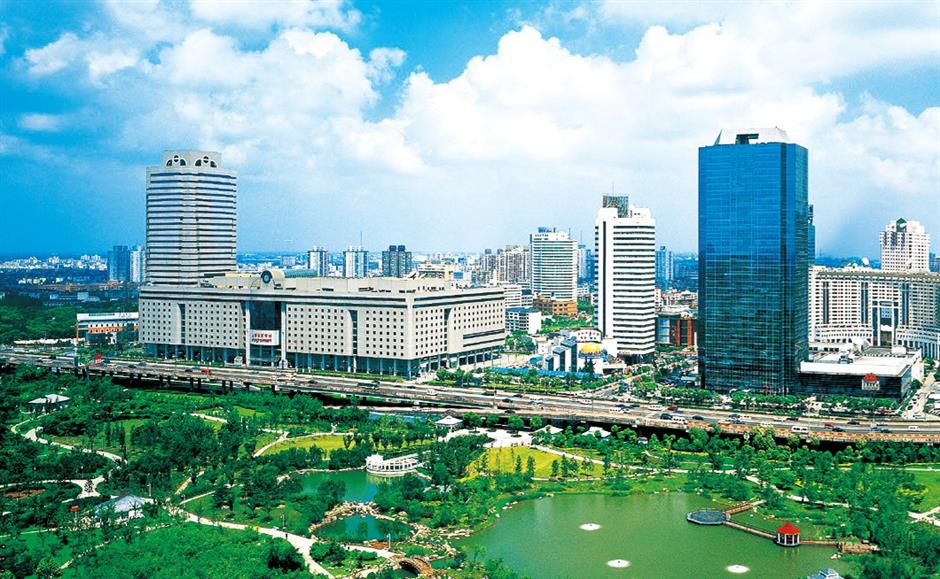 Changning is where 124,000 foreigners live or do business in Shanghai. The downtown district is also home to 27 foreign consular offices and more than 7,000 foreign-funded companies, institutions and regional headquarters of multinational conglomerates.

Like their Chinese peers, foreigners and foreign enterprises in Changning have to cope with one of the two certainties in life — taxes.

And that is made more difficult because of the language barrier.

However, the Changning District Office of the Shanghai Municipal Tax Service is providing a solution.

A team of 21 bilingual tax officials who are proficient in English, Japanese, French, German and Russian are ready to give a hand to expats and foreign firms in Changning.

All of them are volunteers, with an average age of 33. They work in different departments in the office but stand by for calls for help from the multilingual service counter.

The counter was established by the office to serve foreign individuals and institutions.

A Japanese businessman, surnamed Sado, earlier visited the counter to seek help. Sado had difficulties in registering for the app for individual income taxation. Chinese officials who speak Japanese arrived at the counter immediately and helped him complete the registration.

Sado, who works with a trade firm in Shanghai, had initially been worried about the language barrier. However, the smooth communication at the counter and the professional attitude of the Japanese-speaking officials exceeded his expectations.

He gave a thumbs-up to the volunteers after his registration.

Wu Qianwen, who heads a panel of six Chinese officials who speak Japanese, said: “Our precision bilingual service is accurate, proficient and offered with a good attitude.” 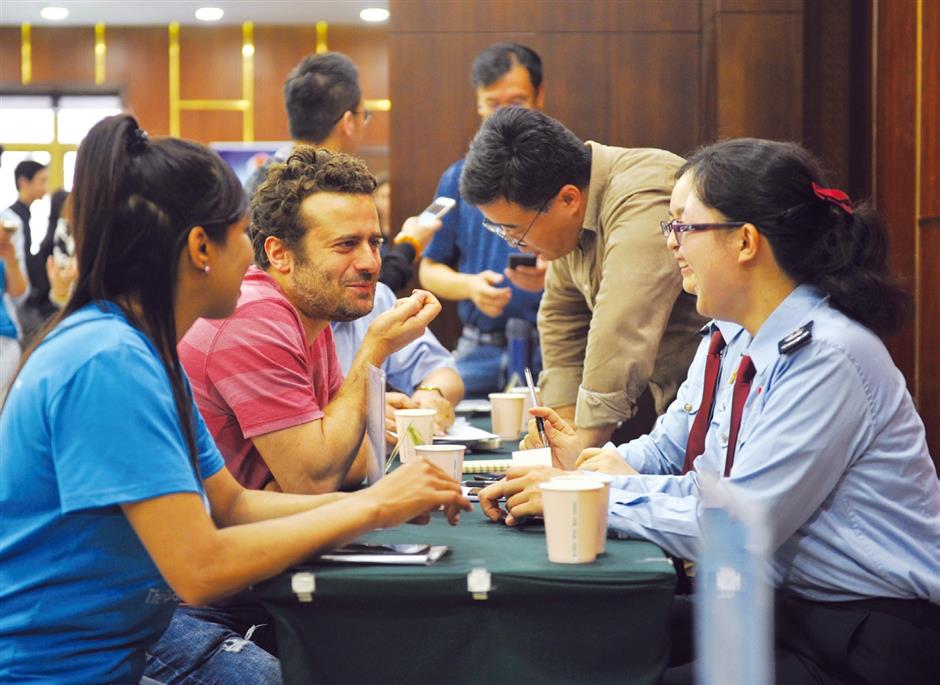 There are two other panels whose members speak fluent English, French, German and Russian.

The counters have helped people in areas such as obtaining their registration code for the individual tax management system and consultation on individual income tax issues.

It has served more than 900 foreign visitors since the beginning of the year.

During a recent seminar at the Gubei Civic Center, or the “city hall” of the Gubei international community, more than 80 expats working in Shanghai were informed of Chinese policies as well as how to pay their taxes correctly.

An expat who gave his name as Daniel highly praised the seminar.

“I finally understand the policy of housing subsidy on personal income,” he said. “I just came to Shanghai and didn’t understand China’s individual tax policy.”

He expressed his thanks to the Changning tax service for their professional education.

The Expatriate Center, a non-profit organization specializing in serving foreigners and overseas returnees in Changning, invited the bilingual tax officials from Changning office to give the seminar. 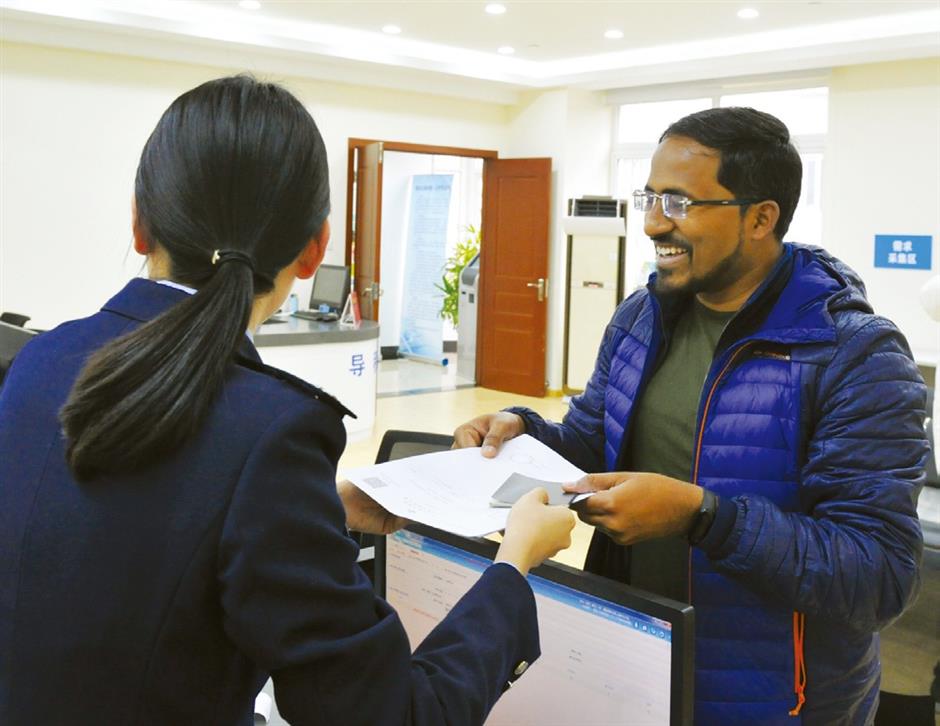 A foreign businessman receives business papers from a taxation official.

“After the promulgation of the new individual income tax law, many foreigners working and living in Shanghai are still trying to understand its meaning,” said Lisa Qian, director of the center’s China Liaison.

“We had worked with many consulting firms and found that they had put forward different versions of their understanding of the law, which has led to a lot of information confusion,” Qian said.

The Saturday lecture was warmly welcomed.

The main language of the lecture was English. In addition to using Chinese in one-to-one consultations after the meeting, English and Japanese consultation booths were also provided.

Tax officials not only made clear explanations in the introduction section, but also in the question-and-answer section, which was very professional, according to Qian.

“One of the attendees who had lived in China for a long time said that he had found the officials to be warm, patient and with a friendly attitude,” Qian added.

“In the future, we hope to continue to work with Changning tax service, to carry out more thematic lectures and to help the community of expats.

“There are many multinational institutions and organizations which have close ties with our center. Similar lectures on corporate tax law could be held to highlight the support of the Changning tax service for enterprises in the district.

“In addition, there are different communities with expats from different countries. We are looking forward to having tax services based in other languages.

“Changning tax service’s willingness to serve expats at their doorstep and the strong ability of the volunteers has impressed us and every foreigner who participated.” 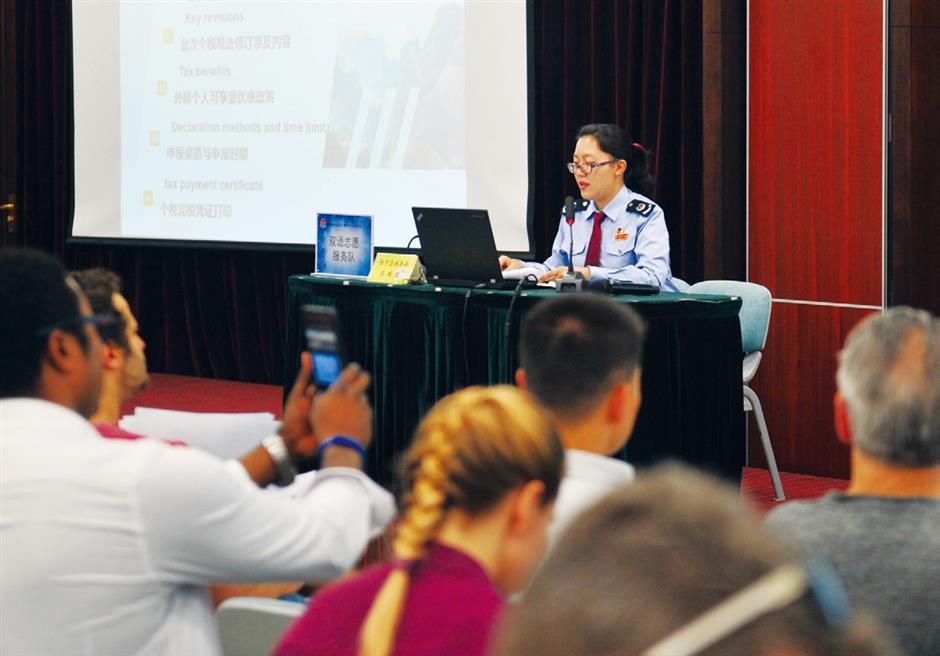 Taxation officials give regular seminars to business people to help them understand the rules.

Speaking of the experience gained from participating in bilingual volunteer service, Wang Ruixin from the English-speaking panel said: “I have been in the office for eight years, and I have been engaged in counter service and income accounting before.

“What a taxpayer needs is what we should learn. While serving the expats, it also fills my knowledge gap,” Wang said.

“As far as I am concerned, what impressed me most recently was the ‘Going Out Bilingual Service’ activity in Gubei Civic Center of Hongqiao Community. This activity is different from the volunteer activities over the bilingual service counter. It was the first time that our team has taken the initiative to go out and provide services to expat groups in the form of lectures.

“At the event, I was deeply impressed by the attention of the expats to the new tax law, and I also saw the necessity and significance of tax policy explanation for foreigners.

“With the new tax law, the benefits of our tax reform not only fall on the Chinese people, but also on the foreigners who come to China for development.

“In my opinion, it is the greatest significance of our bilingual volunteer service team to provide informative taxation services to expats, help this group successfully and efficiently complete various tax-related matters, and let them enjoy our high-quality international business environment.

“We also gain experience from the participation in bilingual volunteer activities.

“Many expat businesses are relatively ‘rare’ and bilingual volunteer activities can help me broaden my business vision and improve my business ability.

“In the process of communicating with expats, we should not only bridge language differences, but also sometimes the differences in thinking.

“In the process of participating in bilingual volunteer activities, we can improve our communication ability with foreign taxpayers, and we can know more quickly where their puzzles lie, and give corresponding answers.”

The bilingual tax officials are not only proficient in foreign languages but also have abundant work experience.

Some of them head sub-branches, and some are members of the office’s expert team.

There are also young officials with outstanding professional abilities.

Many of the officials have achieved high scores in IELTS or TOEFL certificates, or the GRE, CPA or CAT exams.

Chen Ying, director of the office, defined the multilingual service as a way to reflect Changning’s resolution to optimize its business environment.

From the beginning of the year, the central government has intensively cut taxes and fees. Hence, the Changning tax service has launched innovative measures to fulfill the preferential policies.

Apart from the multilingual service, the office also works with other government agencies, taxation professionals and online platforms to expand its services to benefit more taxpayers.

In the Hongqiao Foreign Trade Center alone, the figure reached 11.4 billion yuan, or nearly half of the total, according to Changning government.