Brewing something special at this dream cafe 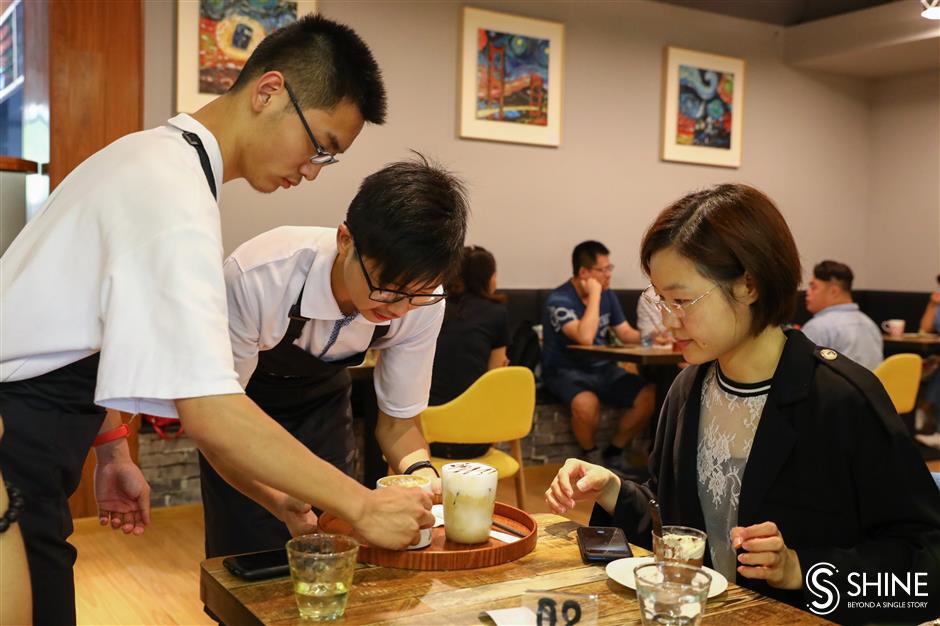 Two intern waiters at Dream Workshop Cafe serve coffee to a customer on Saturday. All seven waiters and six interns at the cafe are mentally handicapped.

Menggongfang Cafe, or the Dream Workshop Cafe, on Chengshan Road in the Pudong New Area has been drawing a lot of visitors over the past few weeks.

On the surface, the choice to open a coffee house on Chengshan Road seems unwise since the area is close to old residential complexes with no commercial zones nearby. The shopfront of the cafe is almost bland, with white boldface Chinese characters of the shop's name on a gray striped board.

There are only 18 tables in the cafe, which somehow make the already roomy space even more capacious. The drinks and snacks are the usual kinds, many of the cakes are made in advance, nothing to brag about.

“Wrong marketing strategy,” one may say.

However, once you walk in, it is self-evident why the cafe in this quite old neighborhood has been garnering so much attention.

The back door of the cafe leads to Pudong Special School,and all seven waiters and waitresses — as well as the six interns — are mentally handicapped and are students of the school.

“Welcome to Menggongfang,” with a resonant voice, a tall young man opened the door for Shanghai Daily reporter on Saturday. He ran to a small blackboard which read “you are our 1,931st guest” and changed the number to 1932.

His name is Yang Ankun. The 21-year-old is autistic, having studied in the special school for over five years, he graduated on June 28, the same day Menggongfang opened.

“I’m one of the first employees at the cafe. I’m the usher. I count the number of customers every day. I don’t make mistakes,” Yang says loudly, with pride. “I have also learned how to make tea and coffee, I can dance and rap.” 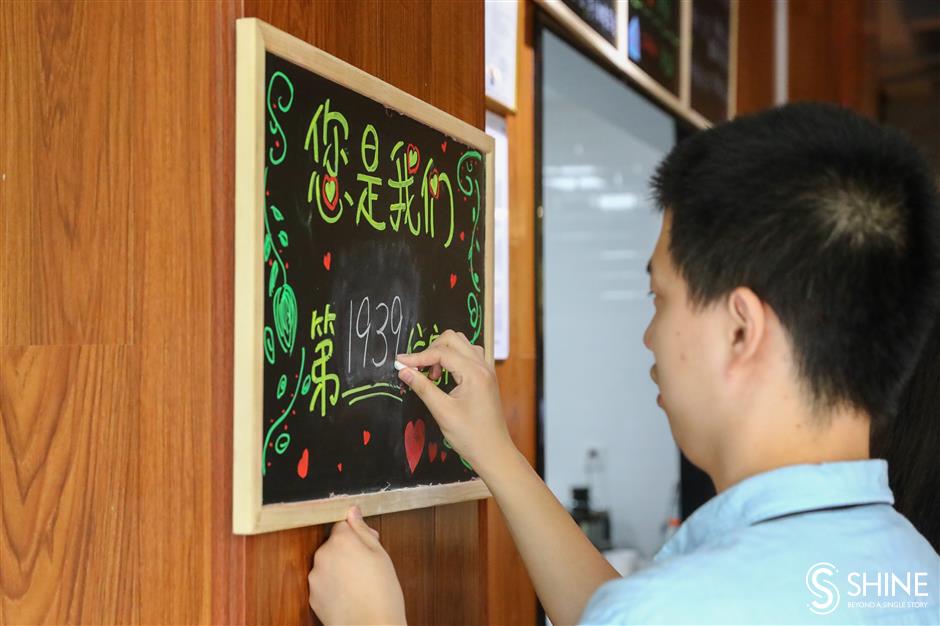 Yang Ankun, the receptionist of the cafe, changes the figure on the blackboard which records the number of customers who have visited the shop.

Two teachers stood in the corner, watching Yang as he introduces every detail of his job.

“He has an extraordinary memory and numerical sense,” said Yang Bin, a teacher from the special school who is also in charge of the students' employment projects. “But he also has behavior that is typical to all autistic children, so we asked him to be the receptionist.”

On taking a seat, a waiter approached and asked if he could offer anything.

“I just learned to make a heart on top of the latte milk foam, do you want to try?” the 19-year-old boy, Ying Hao, said.

Ying is a Down’s syndrome patient and definitely the star of the cafe.

Compared with a skilled barista, it takes Ying twice as much time to make a cup of latte. The heart he makes is a little crooked and he often fills the cup to the brim so that the other waiters end up spilling some of the liquid.

But Ying concentrates fully on the task on hand and hands over the overflowing latte with a huge smile. 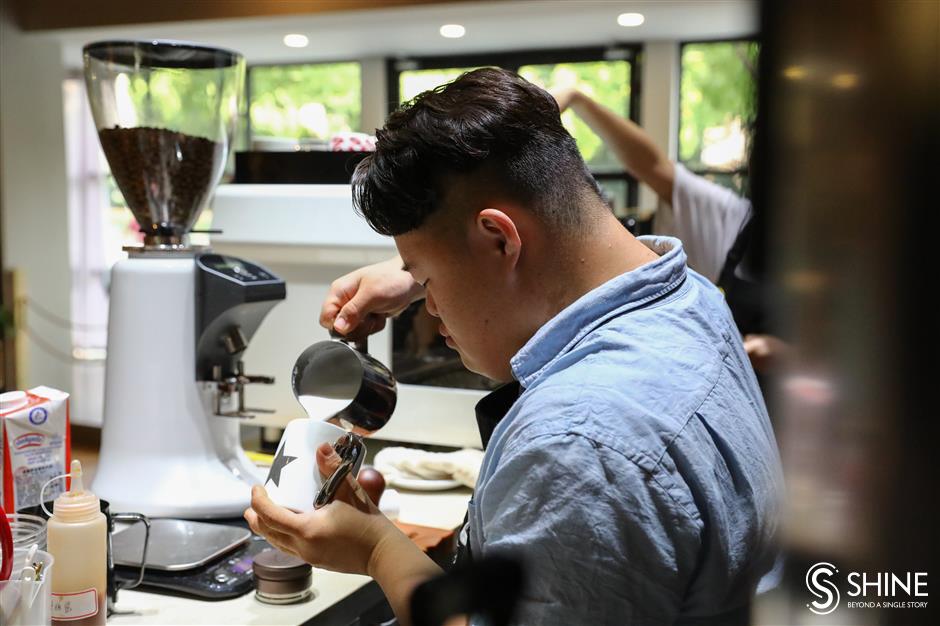 Ying Hao, a Down’s syndrome patient, makes a cup of coffee in the cafe.

He Yutian was managing another cafe when he received the offer from the special school.

“I flinched at first when I heard the seven employees are mentally handicapped,” said He. “But to my surprise, they were more willing to learn and every one of them is genuinely kind and honest.”

He revealed that it was hard at first, as the waiters often forgot what to do. “You had to repeat again and again before they got their hands on the routine,” He said. “But they worked very hard.”

Amid recent wide media coverage, the cafe has been a bit overwhelmed. Many costumers gave a thumbs-up when the waiters served coffee at their tables.

Huang Qiaolin, who lives nearby, came to the cafe with her daughter, they left a memo sticker on the wall.

“The coffee is good, the waiters are so cute,” the note reads. “I wish you all have better lives and make more good coffee.” 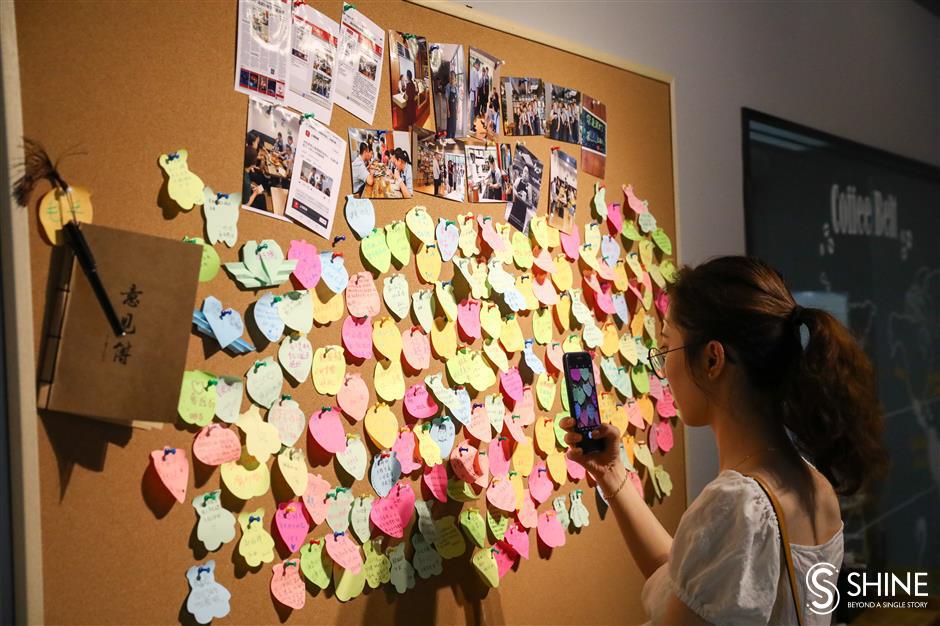 A customer takes a picture of the memo wall in the cafe. Stuck on the wall are notes left by customers to encourage the staff.

Ying's shift finishes at around 5pm. His mother Ying Zhengfang comes to pick him up for dinner. But before leaving, she orders a cup of coffee from her son.

Ying's mother moved to Shanghai when he was only 6, she now runs a Japanese restaurant in Pudong.

She explained that had she left the boy back in her village, he would have had live under prejudices. “It is considered a stigma to have a child with intellectual disabilities (in rural villages),” the mother said.

Ying learned dancing, cooking and playing the piano since he was little. He knew he had to make more effort to master the skills which are seemingly common for the majority.

When Ying first started learning cooking, his hand shook uncontrollably when he held the kitchen knife. His mother watched him closely but let him continue. Gradually Ying learned how to cook Kung Pao chicken and sweet-and-sour pork, both of which require delicate cutting skills.

“I want him to know it is fine to be like him,” she said. “He can still learn and have a fulfilled life.”

Asked what he wanted to do in the future, Ying laughed and said his dream was to be a sushi master. 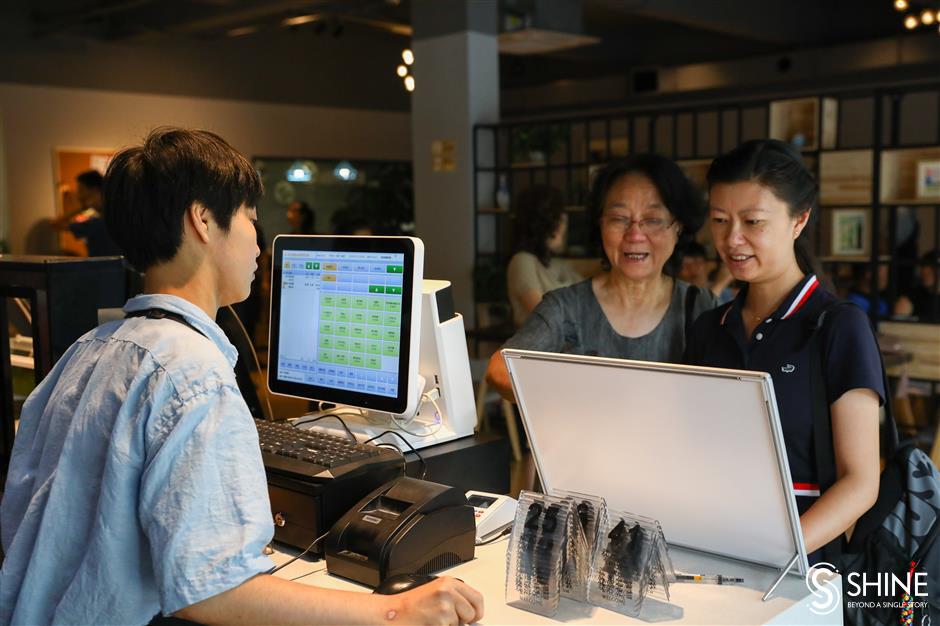 Two customers order drinks at the cafe on Saturday. All seven employees at the coffee shop have signed service contracts to ensure their wages. Teacher Yang revealed that the school has been exploring better ways to help these children blend into society.

“Over the past four years, we have helped more than 100 students find internships and jobs,” she noted. “But compared with the total population of the school, it is far from enough.”

Yang said the school has three campuses with more than 400 students. In recent years, the spectrum of different mental disabilities among students is getting wider.

“In the past, most of our students were mentally challenged,” she recalled. “But over the past two years, more than 100 autistic students have enrolled.”

Different mental disabilities among students have posed new challenges for the school. Yang said the school was critically shorthanded as most of the teachers were taught how to deal with retarded kids, but not autistic students.

“Many children may appear to be dumb and slow, but they are actually quite talented in some way,” she insisted, “such as our receptionist Yang, you just have to learn how to reach out to their hearts.”

Meanwhile, most of the students who got jobs weren’t truly fitting into society, Yang added. Many of them worked as dishwashers in restaurants or cleaners in hotels.

“Most of the time, they work alone,” she said. “After a while, many of them quit because of the loneliness, though they couldn't express their feelings properly.”

The coffee house is merely an attempt by the school to socialize with the students. In the future, the school hopes the students can work as bakers, car washers, or in other service industry sectors which involve interpersonal communication.

Before leaving the coffee shop at around 6pm, Shanghai Daily reporter saw a lady wandering in the shop and taking photos but hesitating to talk to any of the waiters.

She later revealed that she has a 28-year-old daughter with brain paralysis and epilepsy. She has been looking after her alone for more than seven years since her husband collapsed because of overwork.

“I immediately came after I heard about this cafe,” she said. “I want to take some pictures of the waiters and waitress to show my daughter to encourage her, maybe myself as well.”

She said if there are more shops like Menggongfang where no discrimination or prejudice exists, the children suffering pain, like in her family, will have a bright future.

At around 8pm, the cafe finished operation for the day. Yang posted some photos on his WeChat Moments.