Li Qiang, a member of the Political Bureau of the Central Committee of the Communist Party of China and Party secretary of Shanghai, met Colombian President Ivan Duque Marquez yesterday.

Li warmly welcomed the Colombian leader on behalf of the CPC Shanghai Committee, the Shanghai Municipal Government and the people of Shanghai.

The exchanges between the Chinese and Colombian peoples have a long history. Since the establishment of the diplomatic relations between the two countries in 1980, the cooperation and exchanges in many fields have made new progress, Li noted.

This time the Colombian president’s state visit to China, under the invitation of President Xi Jinping, will further open a new chapter in friendly relations between the two countries, Li said, adding that as China’s largest economic center and the window of reform and opening up, Shanghai is accelerating the construction of international economic, financial, trade, shipping and technological innovation centers in accordance with President Xi’s guiding spirit for the city’s work.

Under the framework of cooperation between the two countries, the city will further strengthen cooperation and exchanges with Colombia in various fields, including economy, trade, humanities, science and technology, and make greater contributions to the friendly development of bilateral relations, the Party secretary pointed out. In November this year, the 2nd China International Import Expo will be held in Shanghai. Colombia is welcome to join the exhibition. More Colombian companies are welcome to showcase quality products and share development opportunities on the import expo platform, Li added.

Colombia hopes to carry out more productive cooperation in the areas of economy, trade, infrastructure, agriculture, science and technology, and tourism in order to push forward the steady development of bilateral relations, Duque Marquez said. 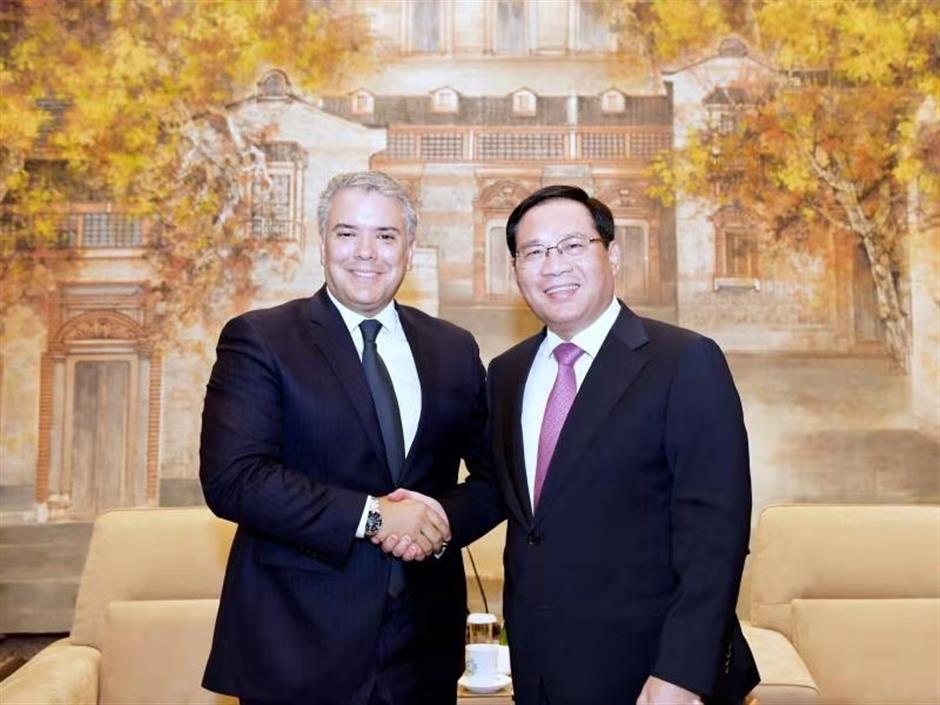 Li Qiang, a member of the Political Bureau of the Central Committee of the Communist Party of China and Party secretary of Shanghai, shakes hands with Colombian President Ivan Duque Marquez.