Typhoon Lekima whips up a storm 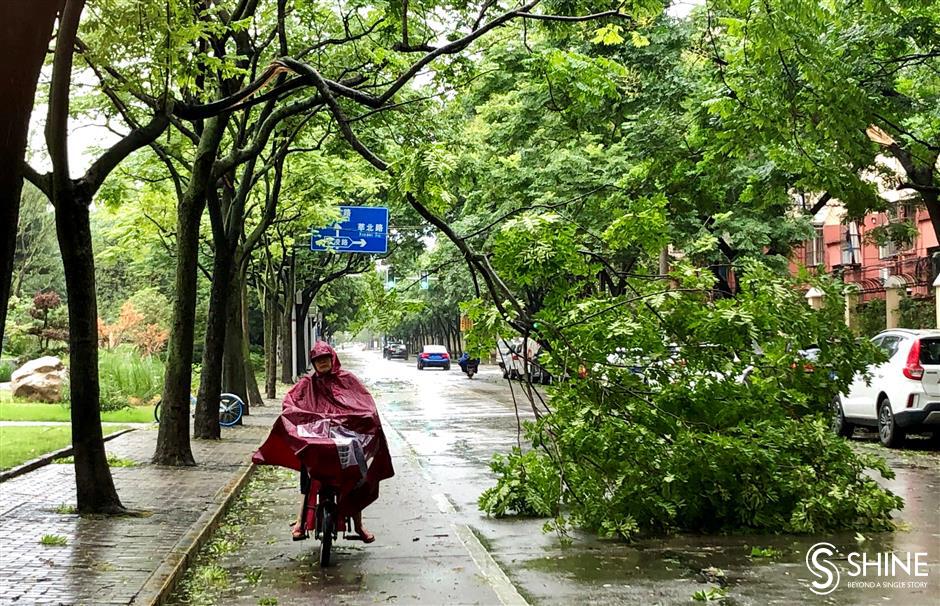 A tree falls on the ground under the impact of typhoon Lekima in Shanghai on Saturday Morning.

Typhoon Lekima will whistle past the Taihu Lake at the same latitude with Shanghai on Saturday night and it will continue bringing rainstorms and gales to the city throughout the day, the Shanghai Meteorological Bureau said.

More than a quarter of a million people have been evacuated and flights, trains and roads have been hit.

Lekima made landing at Chengnan Town in Wenling City in neighboring Zhejiang Province, at 1:45am on Saturday with a gale force of 16, according to the National Meteorological Center.

The center of Lekima was inside Huangyan District, Taizhou City, in Zhejiang at 6am on Saturday at gale force 12.

It is moving northwest at 15 kilometers per hour and will weaken as it moves inland.

On Saturday night, it will pass Taihu Lake and cross the same latitude as Shanghai, according to the bureau.

Lekima has already brought heavy rain to Shanghai. Coastal Fengxian District had the biggest rainfall in the city between 8am on Friday and 5:50am on Saturday — 83 millimeters.

The orange typhoon alert issued by the bureau on Friday remains, while a yellow rainstorm alert remains as well.

In China's color-coded weather-warning system, red represents the most severe , followed by orange, yellow and blue.

Due to the impact of tyhoon Lekima, 500 of the 666 rainfall stations saw over 50 millimeters of rain — classified as torrential — over the last 24 hours by 6am today.

The rainstorms concentrated on Pudong, Fengxian and Jinshan districts. The most rain was 99 millimeters at Nicheng Station.

By 6am, 2,984 trees had been blown down. Emergency repair teams from the state grid have fixed 80 power glitches across the city while another 20 are being repaired. 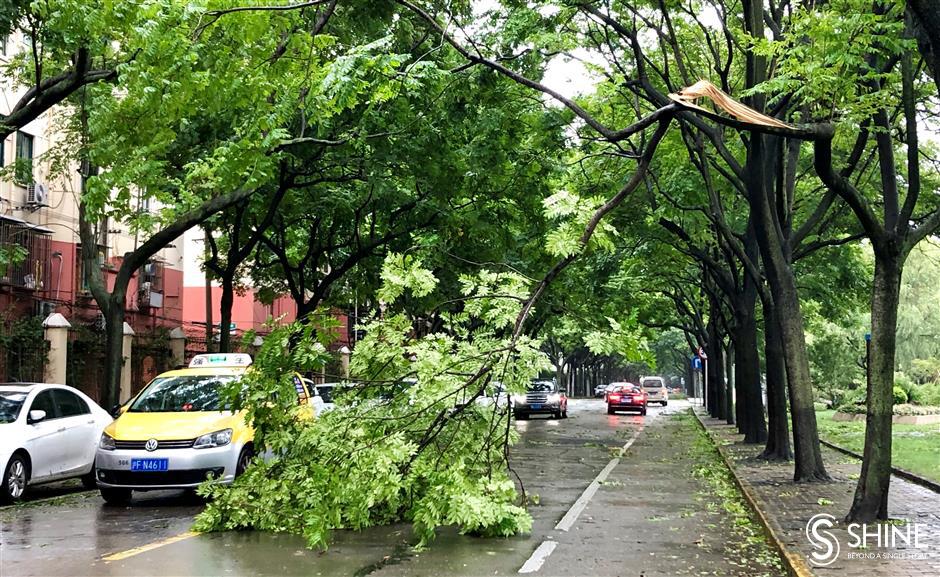 A tree falls on the ground under the impact of typhoon Lekima in Shanghai on Saturday Morning. 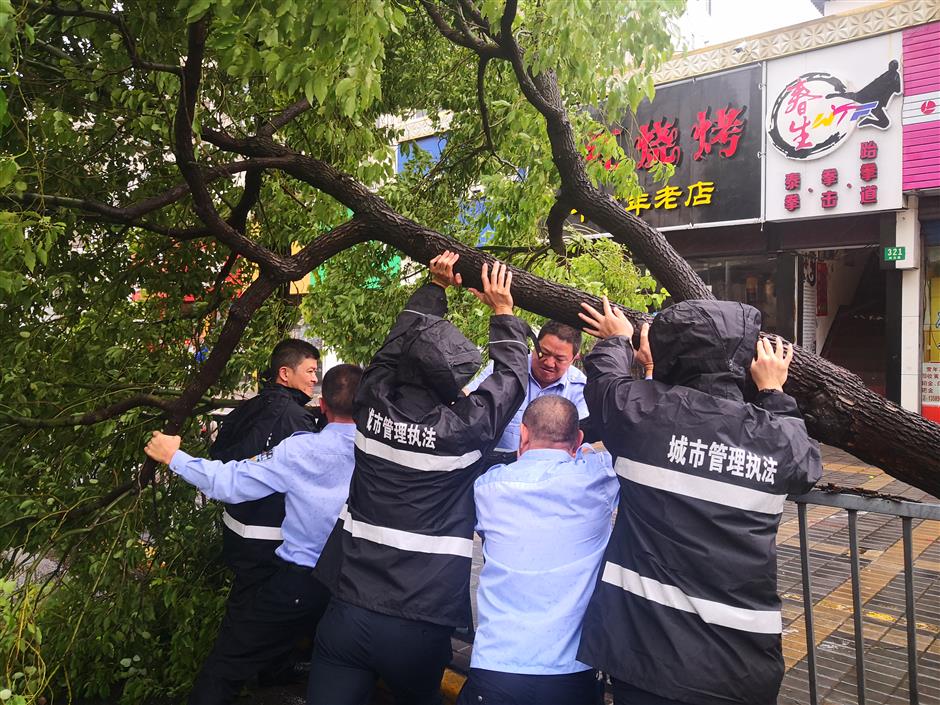 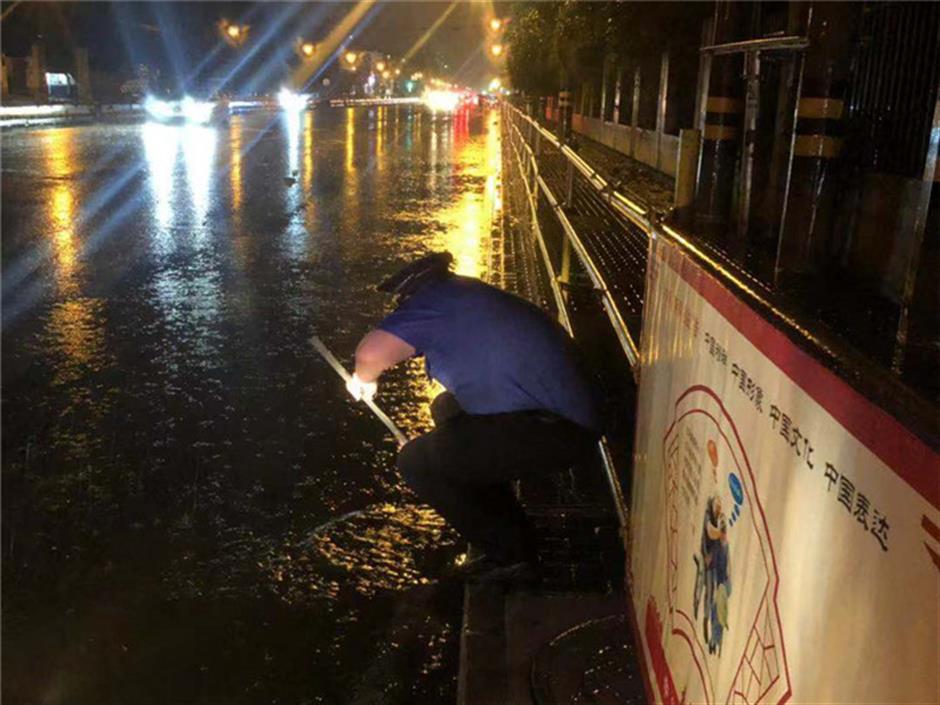 A total of 253,000 people were evacuated from coastal areas and 2,827 boats docked to avoid the storm. All personnel at shore were evacuated and coastal tourist sites such as the City Beach in Jinshan District were closed.

Seventeen ferry routes on the Huangpu River were suspended.

The two airports planned to cancel 1,776 flights on Saturday.

Meanwhile, the ground and elevated road sections of line 2, 5, 6, 8, and 17 also operate under limited speed.

Some indoors tourist attractions such as the 88-floor sightseeing observatory of Jin Mao Tower also closed on Saturday.

It will reopen when the typhoon alert is lifted.

The Shanghai Disney Resort, Shanghai Happy Valley and Playa Maya Water Park said they would offer a refund to tourists who have purchased Saturday's admission. Tourists can also visit on other days.

Industries such as construction, transportation, water, power and gas, dangerous item manufacturing and transportation, areas with big crowds such as airports, railway stations and metro stations, and high-rise buildings, old residential complexes and old farm houses are the priority, he said.

A woman has her umbrella broke under the impact of typhoon Lekima in Xuhui District on Saturday. 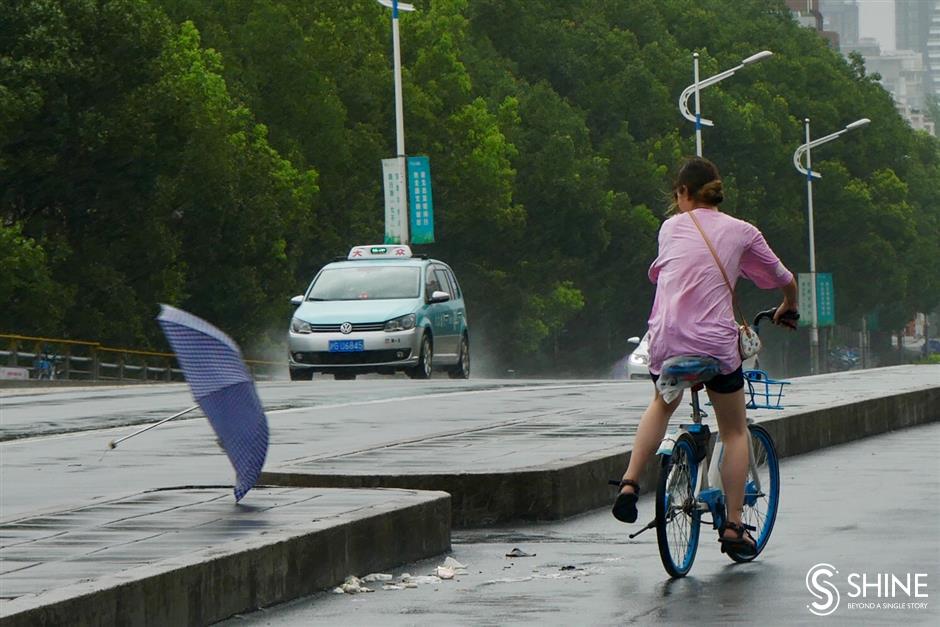 A woman's umbrella was blown away amid strong gales on Saturday morning. 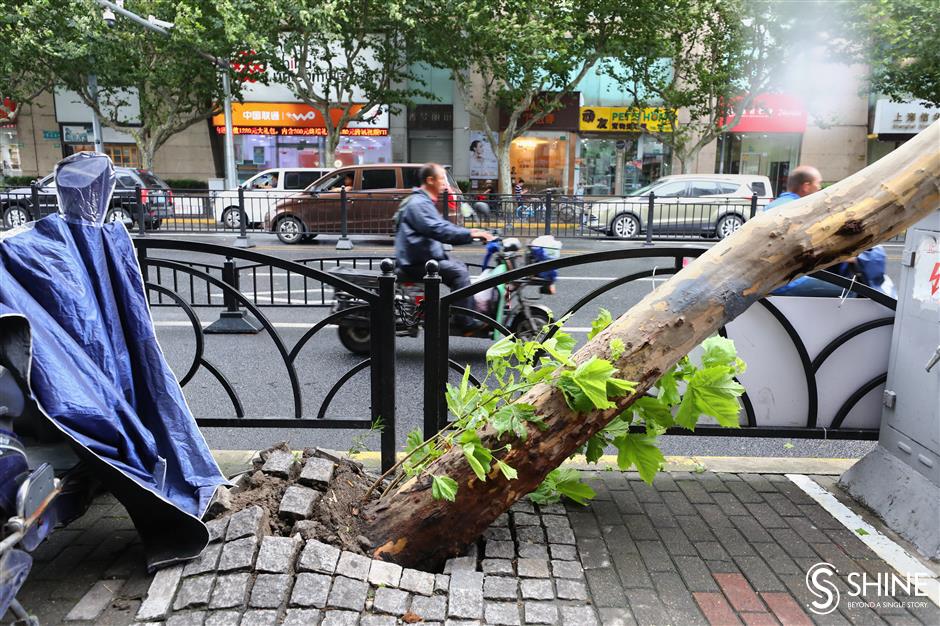 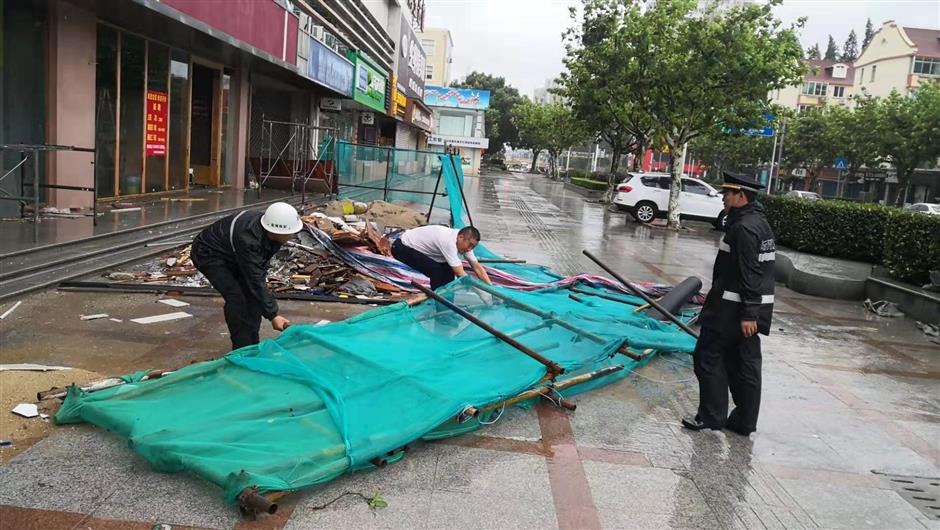 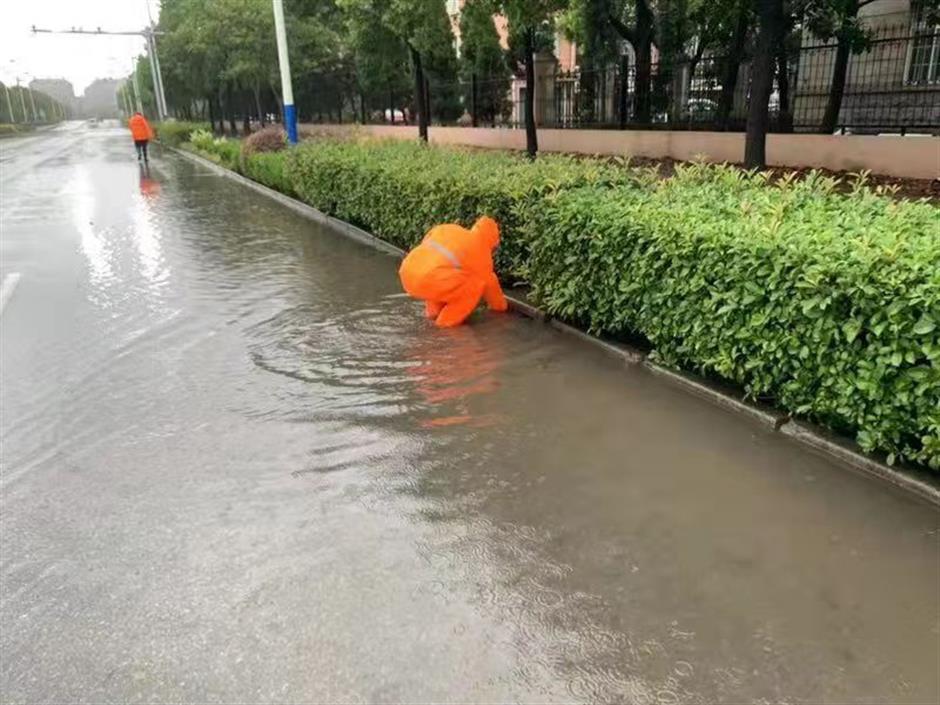 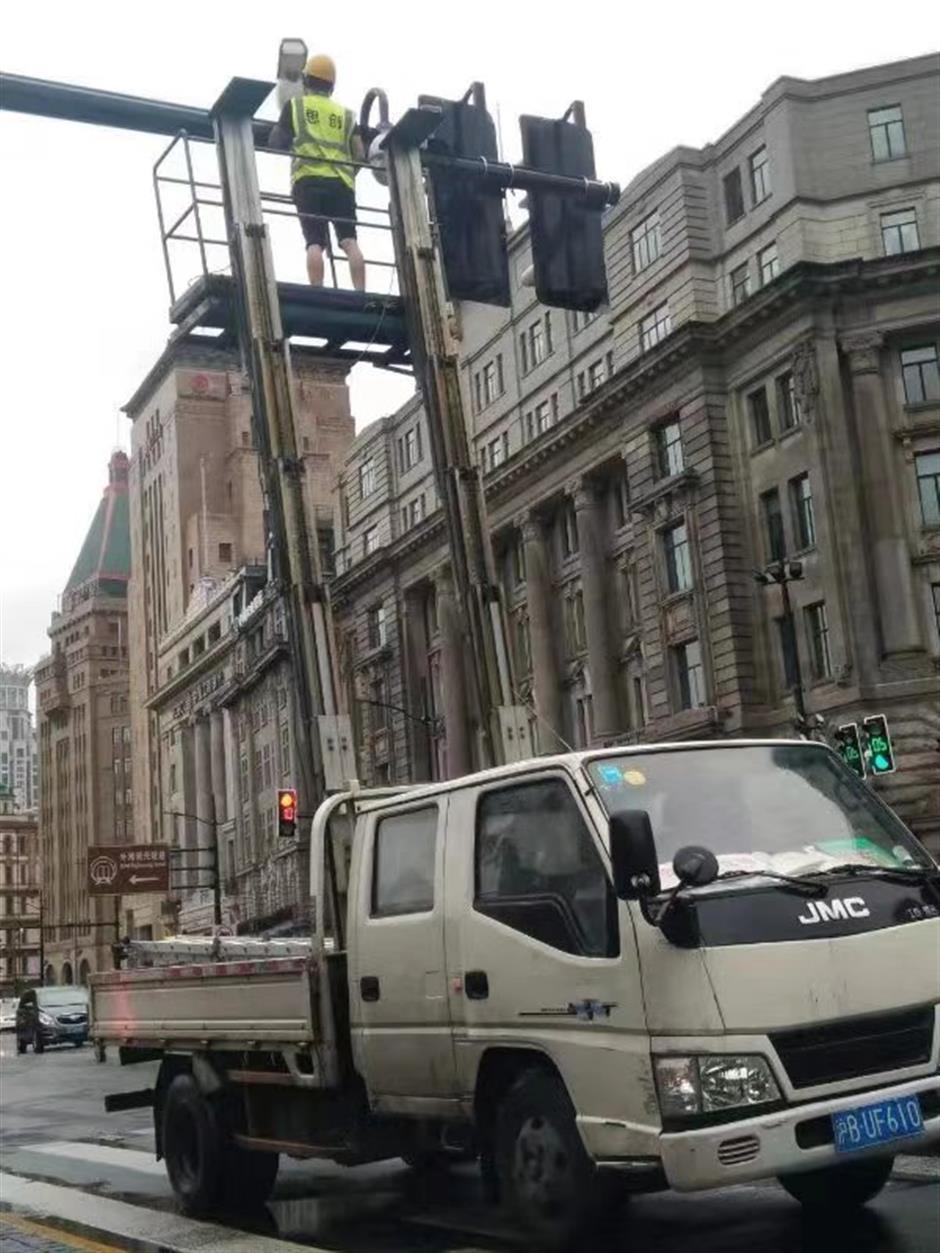