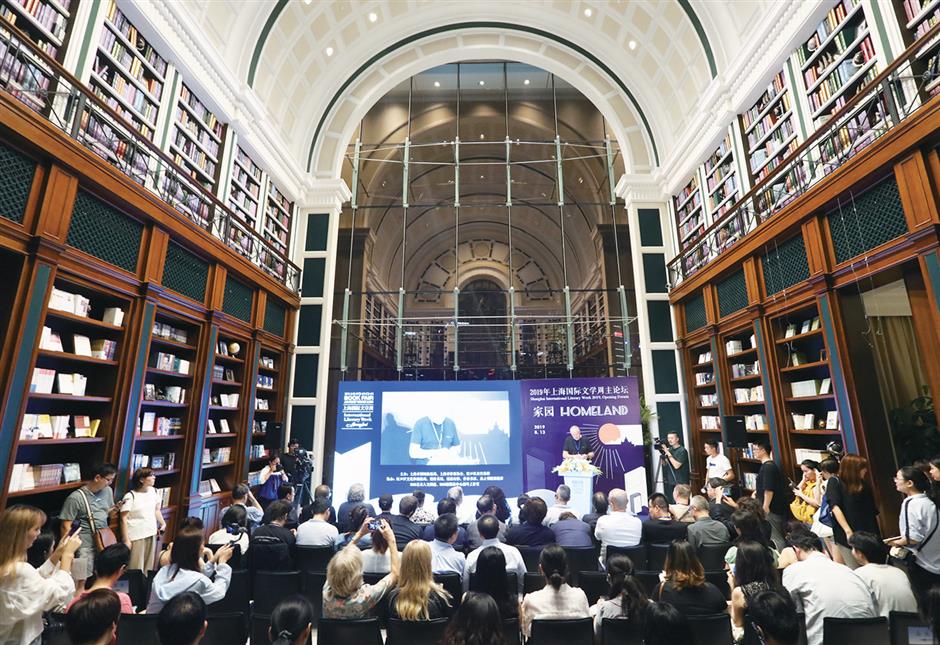 The annual Shanghai International Literature Week kicked off at JIC Books on the North Bund on August 13. The event, organized by Hongkou District, is part of the Shanghai Book Fair that ended on August 20.

Hongkou District, once a popular abode of many famous modern Chinese writers, is aiming to revitalize its literary culture spearheaded by a number of events that were held during the 2019 Shanghai Book Fair, which ended on August 20.

The north downtown district is re­garded as the gathering place of cultural celebrities as well as the birthplace of haipai, the unique Shanghainese culture of East-meets-West.

Organized by the publicity department and the culture and tourism bureau of Hongkou, a series of public events gath­ering writers and readers from both home and abroad have been held during this year’s book fair at bookshops and cultural venues in Hongkou.

The main forum of the annual Shang­hai International Literature Week started at JIC Books on the North Bund on Au­gust 13.

“A book is a world to me. When I open an old book, I can enter the world imme­diately,” said Kakuta, who won the Naoki Prize, a Japanese literary prize awarded twice yearly to outstanding novelists of popular literature, in 2005.

Eilenberger said homeland to him is “the way people exist in the world.”

Chinese translator and literary critic Yuan Xiao said homeland means “rela­tives or those who are always waiting for us.”

The international literature week has been held for nine consecutive years as a major platform for global writers and readers to exchange ideas.

Events focusing on film, book reviews, Shakespeare and science fiction have been held.

Participants included Nobel laureates Mo Yan and Svetlana Alexandravna Alexievich, as well as the winners of other major literature awards. 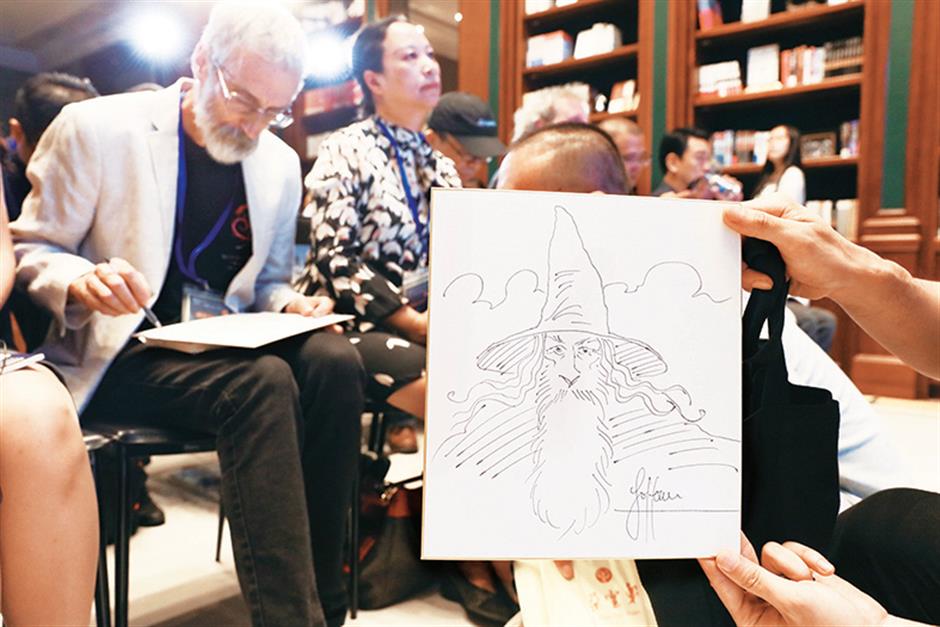 Canadian illustrator John Howe (left) draws Gandalf from “The Lord of the Rings” for Chinese readers at the Shanghai International Literature Week.

While the demise of bookstores has long been lamented in the age of online reading and e-books, brick-and-mortar bookshops in Hongkou District have re­invented themselves.

During the book fair this year, Hong­kou released a guideline to support the development of bookstores with cash subsidies and activities. More compre­hensive bookshops will be opened at local communities, commercial hubs, near campuses and transport hubs, ac­cording to the district government.

Small boutique stores specializing in a certain field will receive special support, while large bookstores will be invited to open more branches in Hongkou.

The district already has a number of popular bookstores. Many have become online sensations that readers come from across the city to visit and take photos.

The view of the Bund from the third floor of JIC Books on Gongping Road on North Bund, for example, has led to many photos on the Internet. It boasts the biggest collection of biographies in China. Each month, one author is fea­tured in a special corner of the shop.

Another popular bookstore, the Si­syphe, can be found at the CapitaLand Hongkou Plaza, which is also a cafe-style venue that provides food and drinks.

Standing on either side of the store’s entrance are two British Georgian-style bowed windows. The store is awash with bright colors and decorated with cartoon images, such as donkeys and rabbits.

Not far away, the Yan Ji You Book­store at the newly released Moon Bay at Ruihong Community has become a popular shop among young people. Visitors can read, drink and be in­spired by many innovative designs and artworks.

The Ban Ceng (which translates as “half level” in English) bookshop offers a more historical flavor. The American-style building was once home to a machine factory. During World War II, many Jew­ish residents took refuge in it.

Under the new guideline, various read­ing spaces have been planned across Hongkou, not only bookstores and li­braries, but also reading booths and reading spaces at shopping malls. The district aims to promote reading activi­ties on “red culture,” or the history of the Communist Party of China, the city’s unique haipai culture as well as a cam­paign titled “Reading Anywhere.” 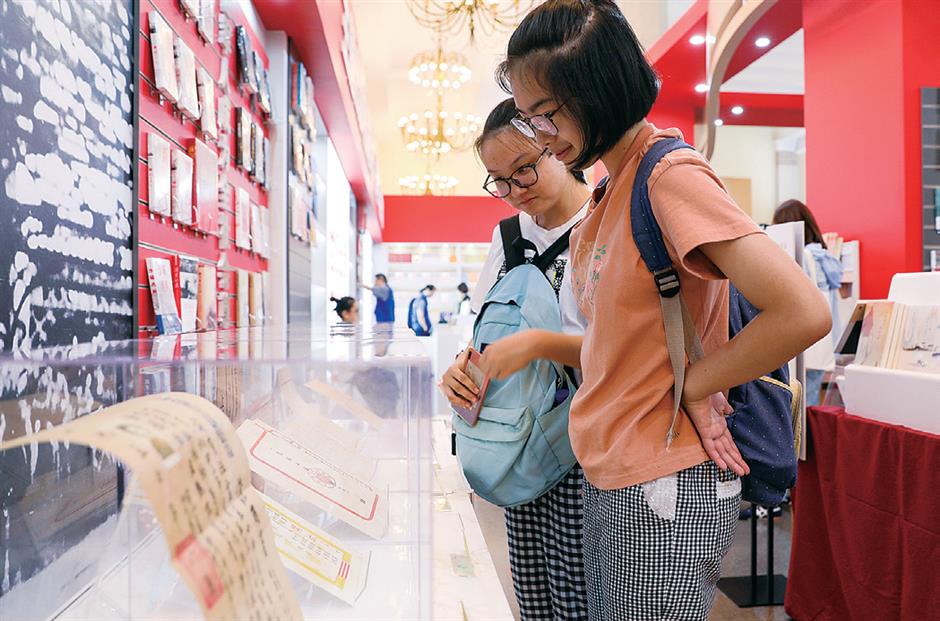 Manuscripts by revolutionary martyr Shi Xiaowen attract visitors during the Shanghai Book Fair. The Hongkou scripts are part of the historic “red culture” documents displayed at the fair. 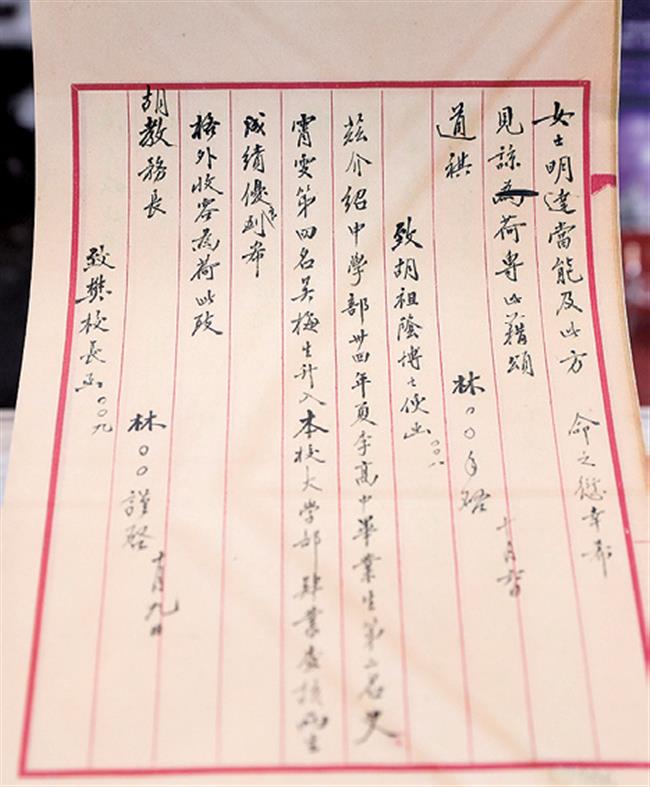 Hongkou has been promoting reading and culture among its citizens with a number of public activities. Some 120 book clubs, for example, have been founded in Hongkou where local readers can share reading experiences or listen to weekly lectures.

A league among some 270 local reading clubs has been established in Hongkou during the book fair. The clubs including many originated in Hongkou aim to encourage more citizens to read and further promote reading cultures. The league has released a book list of more than 100 recommended books for citizens.

A number of reading rooms have been opened near local wet markets for mi­grant workers and their children to read or borrow books. A number of book ex­change programs have also been started. A youth reading festival has been held in Hongkou for seven continuous years to encourage children to read.

Hongkou has released a three-year action plan to become a “heritage and promotion hub” by 2021 for haipai.

Apart from the newly opened book­marts, the public can also visit the former residences of celebrated writers. Jing Yun Li, which is listed as the “No. 1 Celebrity Lane,” will be restored and developed for exhibitions.

Lu Xun, Chen Wangdao (1891-1977), Mao Dun, Ye Shengtao and Rou Shi (1902-1931) were among the celebrated Chinese writers and scholars who lived in typical shikumen (stone-gate) build­ings in the lane.

The Shanghai Literature Museum, a joint effort of the Hongkou government and the Shanghai Writers’ Association, will take up an area of 12,500 square meters on Sichuan Road N. The museum will collect, research and promote haipai literature and modern literature created in the city.

The existing Shanghai Haipai Culture Center on Sichuan Road N. has already become a key site to promote and develop cultures with a number of lectures, exhibitions and other cultural events.

It aims to become a new cultural landmark in the city, based on the historical and cultural background of Hongkou, to drive the inheritance, innovation and prosperity of haipai.

Throughout the year, experts, schol­ars and artists, including Wang Peiyu, a noted Peking Opera performer, Gu Haohao, director of the Shanghai Kunqu Opera Troupe, and pingtan (sto­rytelling to music in Suzhou dialect) artist Gao Bowen have been invited to give lectures and discuss the inheri­tance of haipai culture.