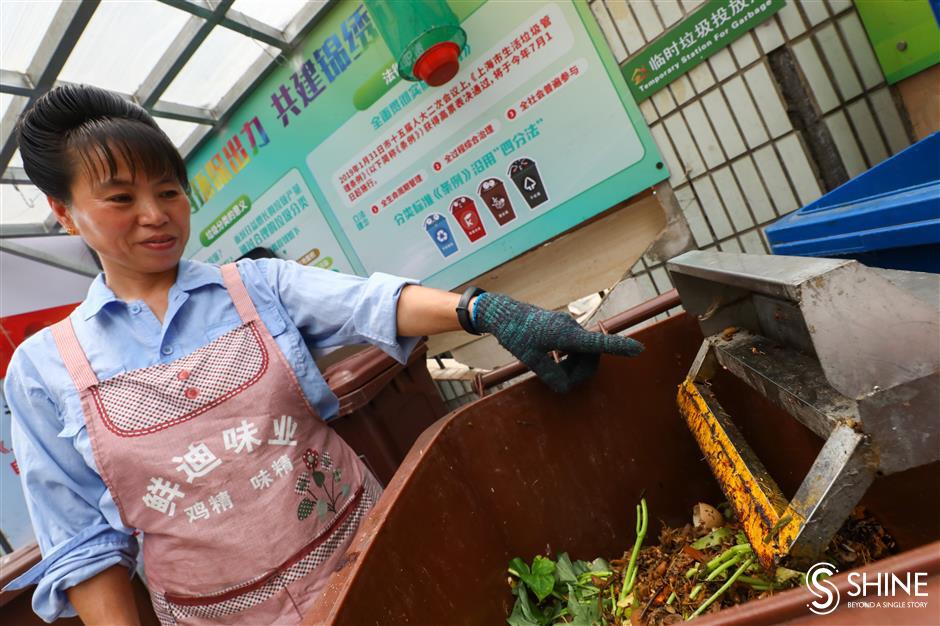 A tool to burst plastic garbage bags is used at the Julong Dasha residential complex. 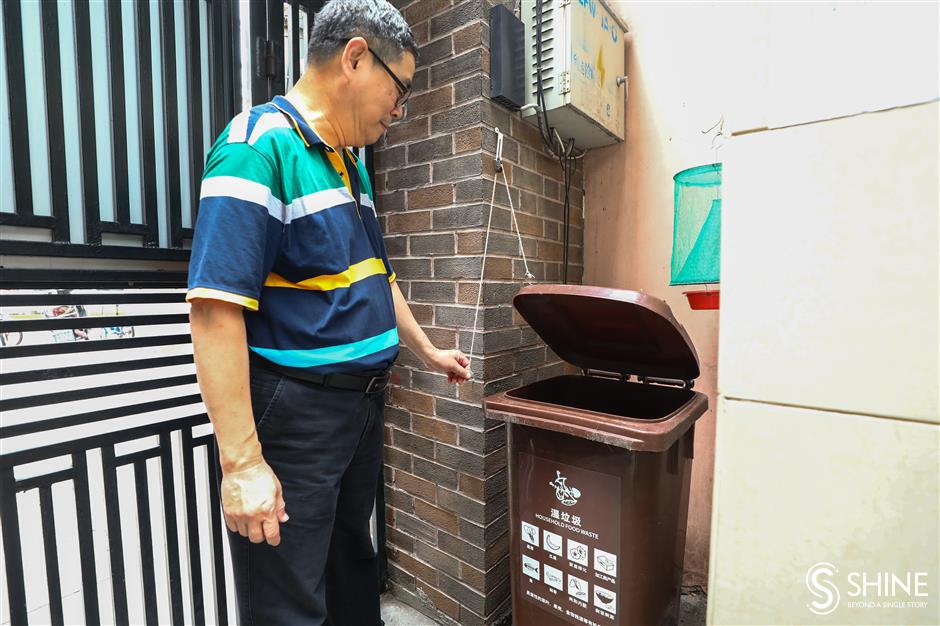 At the Weihai residential community in Jing'an District, the handle of a garbage bin for wet trash has been connected to a rope.

People in Shanghai are coming up with all kinds of ideas to make garbage sorting easier.

At the Weihai residential community in Jing'an District, the handle of a bin for wet trash has been connected to a rope and pulley. By pulling the rope, people can open the cover of the bin immediately. The rope can then be fixed to a nail on the wall, keeping the cover open while residents dispose of their food waste.

"The bin is normally closed because of the smell," said Zhao. "But people found it difficult to dump their trash with one hand while holding the cover open."

"The complex is small, and there is nowhere for residents to wash their hands after disposal," said Zhu Xiaojing, Party secretary of the Weihai residential community. "The design is smart."

"We have received very good response from residents," she added. More than 30 households use the bin. 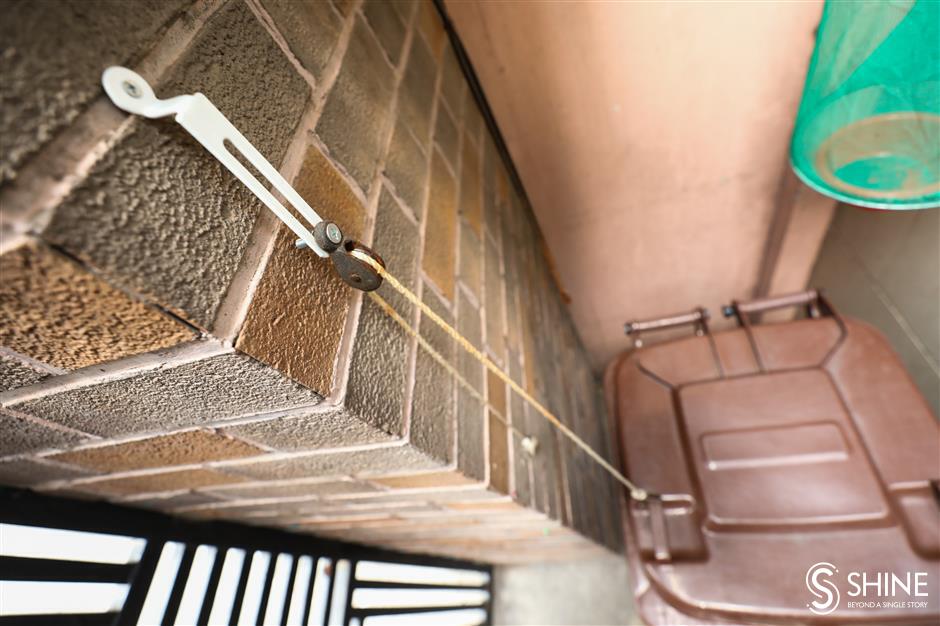 The handle of a garbage bin for wet trash has been connected to a rope.

At Kanglecun residential complex, special tongs were adapted by Zhang Hongying, a resident and garbage-sorting volunteer. She found that traditional tongs were difficult to use in removing wrongly placed trash.

"Traditional tongs were too long and tips too sharp, making it difficult to hold the garbage tightly enough," she said.

Zhang wrapped sponge on the tip of the tongs, and attached anti-slip ring to them.

Now, she can easily take garbage bags from the bin for wet trash and wrongly dumped garbage, even a leaf. 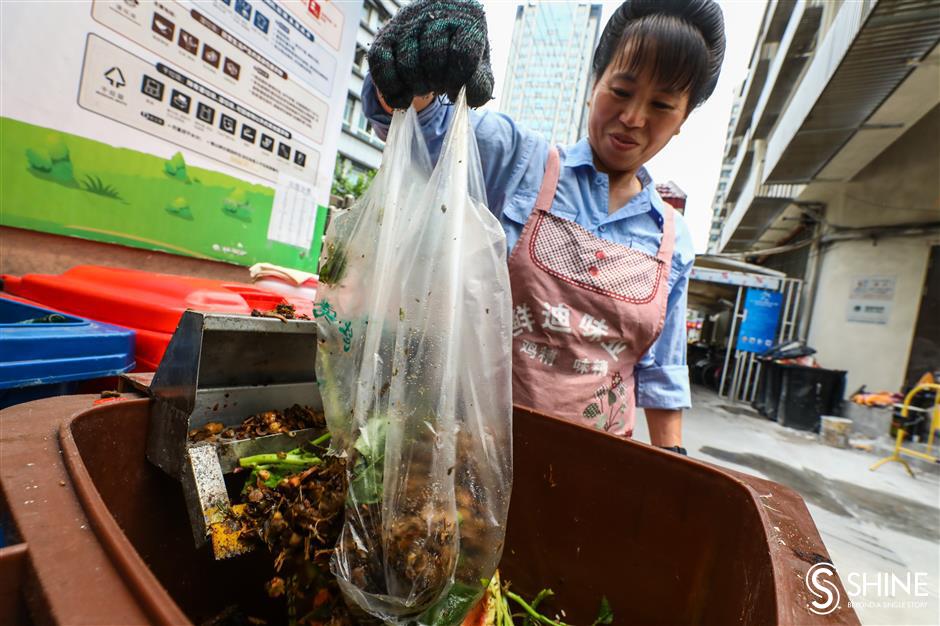 Throwing plastic bags — even if they are biodegradable — into garbage bins for wet trash is not allowed.

Food waste and other wet matter inside plastic bags must be emptied into wet trash bins, and the bags themselves then should be placed in dry trash bins.

Separating the two is the biggest problem at present as many residential communities said people are not willing to remove wet trash from bags for fear of getting their hands dirty on their way to work.

At the Jiaotong Gongyuan residential community of Zhijiang Road W. Subdistrict in Jing'an, a tool to break plastic garbage bags open has been invented by resident and placed at the bin for wet trash.

"It is now in its second version," said Liu Wenli, director of the Jiaotong Gongyuan neighborhood committee.

"The first version was a wooden tool with nails, but residents said it took up a lot of space and was not easy to use," she said.

The current one has been in use since July.

"It is simple to use once you understand how," she said. "We also helped residents use the tool and they are all very used to it now."

Water is provided for residents to clean their hands after disposal, but in winter, it can be too cold to wash your hands, making the tool more important, she said.

"The tool adds fuel to residents' enthusiasm in garbage sorting," said Liu. Sorting in the complex has reached 95 percent, with five barrels of dry trash, and two or three barrels of wet garbage sorted out every day. 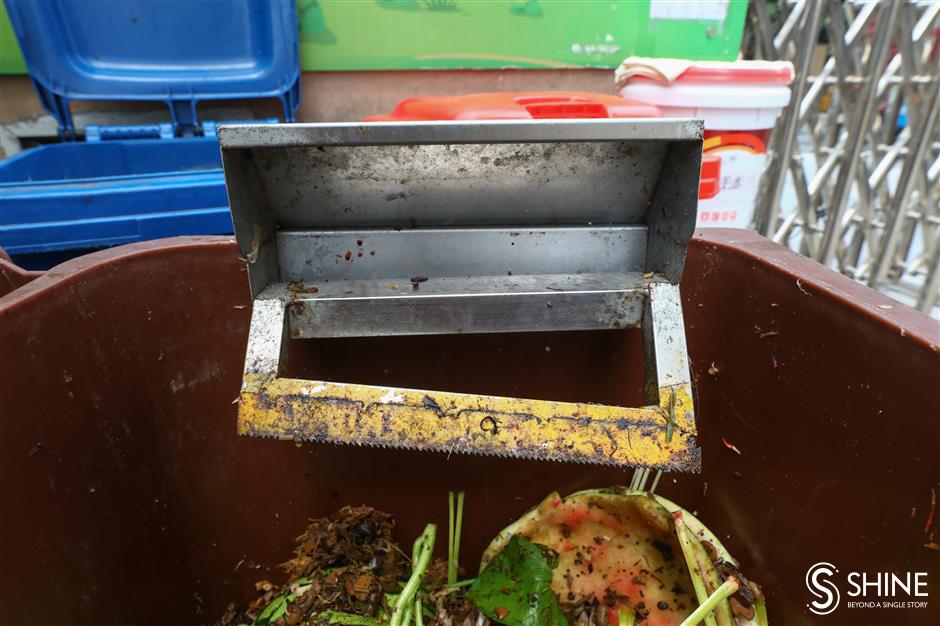