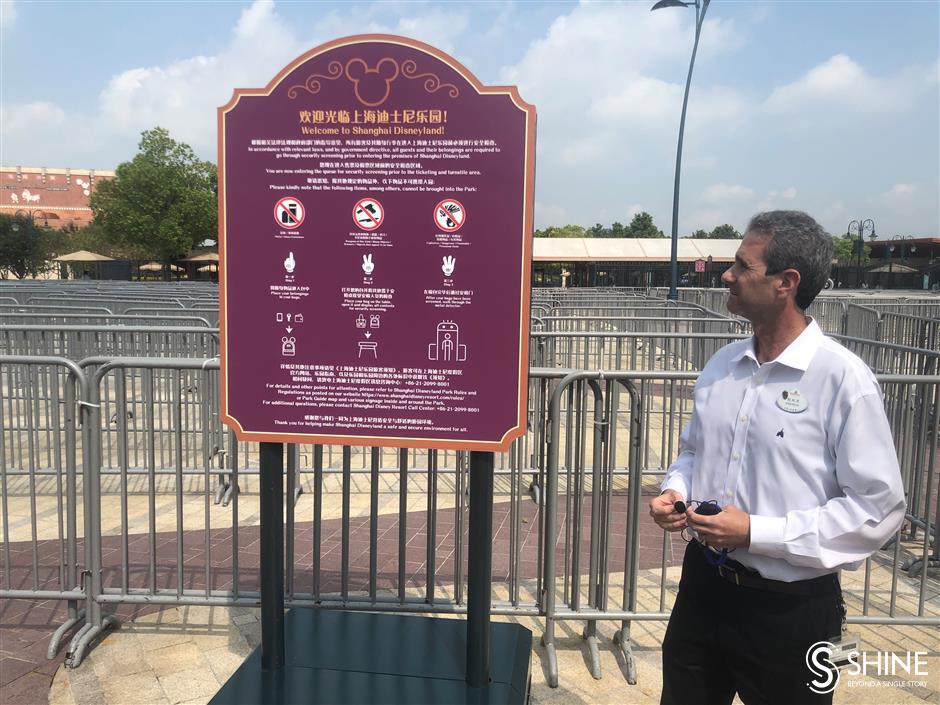 Andrew Bolstein, Senior Vice President of Operations of Shanghai Disney Resort, introduces the new signboard in front of the park's entrance at the queuing area which reminds visitors to cooperate with the security screening.

Visitors to the Shanghai Disney Resort can now take their own food into the park, and their bags will no longer be rummaged through by security staff.

The new polices were introduced on Wednesday in the wake of widespread public ire against the resort's previous ban on outside food, as well as complaints of rude staff behavior at security checkpoints.

Visitors are now allowed to bring outside food and beverage items into the park for self-consumption, provided that they do not require heating, reheating, processing, refrigeration or temperature control and do not have pungent odors, said Andrew Bolstein, Senior Vice President of Operations at Shanghai Disney Resort.

Instant noodles, food kept in containers with reheating capabilities such as self-heating hotpot, and durian fruit are still prohibited. The same goes for whole watermelons.

“But you can bring sliced watermelons,” Bolstein said.

Bottled non-alcoholic drinks are allowed, but cans and glassware will be kept out, except for small baby food jars. The resort operator explained that the prohibited items are not environment-friendly.

Bolstein also introduced a more guest-friendly and less intrusive security screening process. "We will also introduce more technologies such as the x-ray in the future, but it needs time," he added.

“Guests are encouraged to open their own bags and remove any flagged items and return items themselves when the security screening is completed,” said Bolstein. “The staff will no longer reach their hands into the guests’ bags.”

He explained that since opening in 2016, security personnel have found more than 10,000 explosive or flammable items and over 5,000 toy guns or items appearing to be weapons.

For those who inadvertently arrive at the park with prohibited items, the park now offers daily storage for a fee of 10 yuan (USD$1.41) per item. The size of the item can be no larger than 60 centimeters. Multiple items can also be stored together, provided they do not exceed the 60 centimeter limit.

At the gate of the park, Shanghai Daily saw visitors file through the security screening area. Security staff with gloves held small flashlights to look inside the bags of visitors. Each bag check took roughly 15 to 30 seconds.

Visitors with suitcases were asked to open all pockets and take out anything that may be flagged.

“I personally don’t mind them opening my bag,” said a visitor named Zhang who took her grandson to the resort. “I’ve been to the Disney Resort in Japan and Hong Kong. The procedures were the same.”

“It depends on the attitude of the staff, I think,” said a visitor who identified herself as Monica. “I understand the safety concerns but it’s still uncomfortable if the staff act rudely when they ask you to open the bag.” 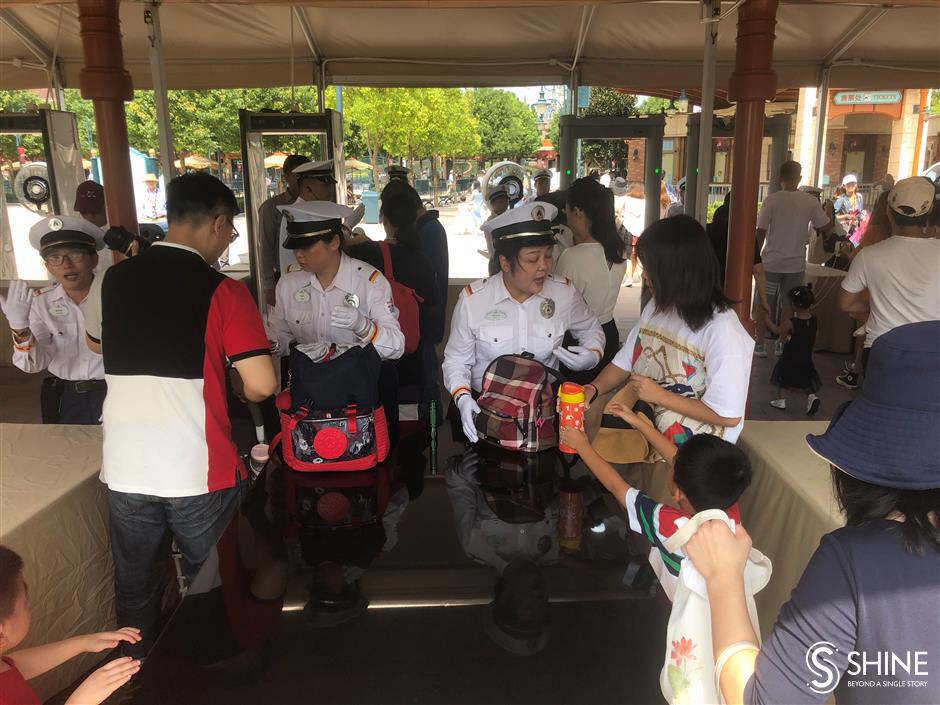 Staff checks visitors' belongings at the gate of Disney on Wednesday. 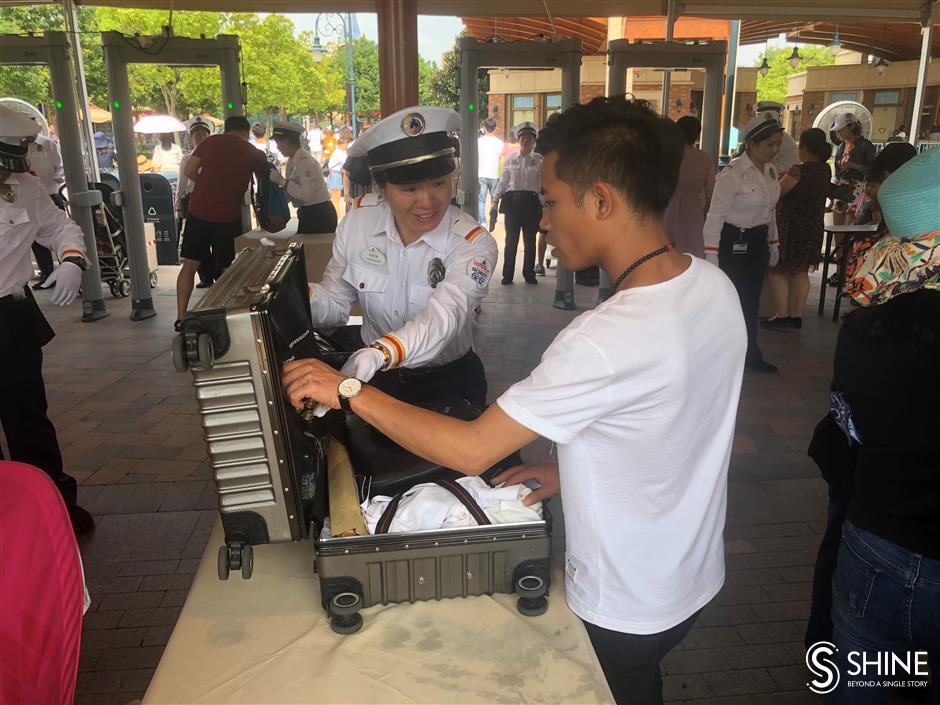 Visitors open their own bags and cases for check.

Bolstein said all staff at the security check are well trained and will treat guests with politeness and respect. No staff will force a visitor to open their bag.

"If a guest refuses to open his or her bag, the staff will try their best to persuade them,” Bolstein told Shanghai Daily. “But if they absolutely refuse to do so, we will have no choice but to give them a refund and kindly ask them to come some other day.”

“I think most of us understand and respect the rules,” Wang Danting, a visitor from Shandong Province, told Shanghai Daily. “But I’ve read news about the tensions between visitors and the staff. It could have been the weather and the long queue they had to wait in. Sometimes we all get a bit grumpy, whether its visitors or the staff.”

Youyou, an 11-year-old girl, said she told her parents not to bring their own food to the park. “I want to have a taste of the restaurant here,” the girl said. “I can have my family meal every day, but not the set meals here.”

The resort has arranged designated picnic areas inside the park where visitors can have their own food and beverages. The area is a large grassland with chairs and tables in the open, as well as some tents.

All visitors are reminded to follow waste sorting rules and help maintain a clean and tidy park environment. 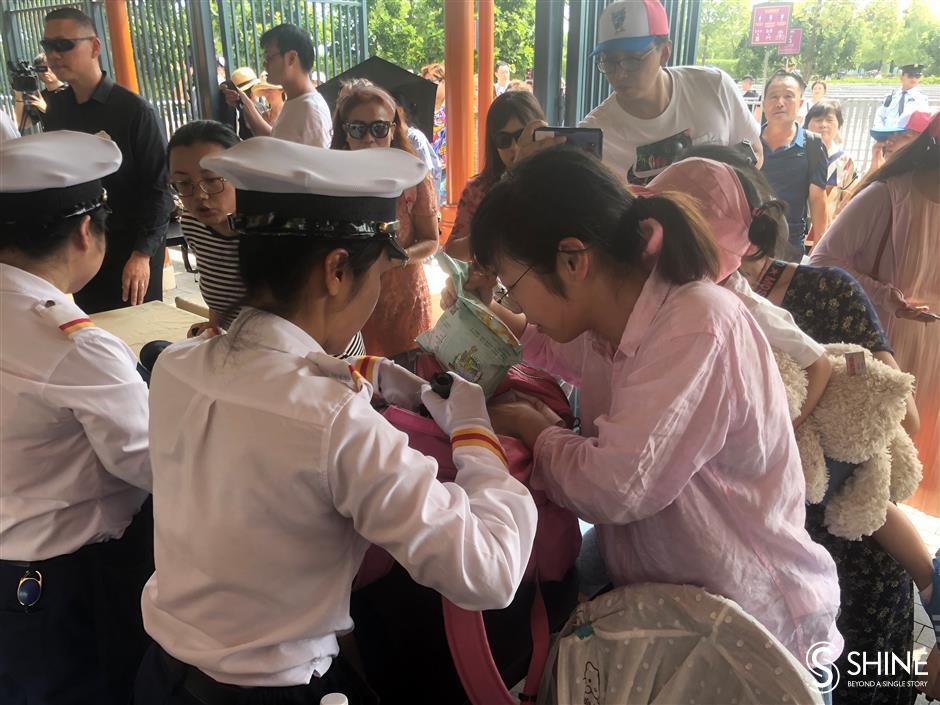 Visitors take out their own snacks and food for check on Wednesday. 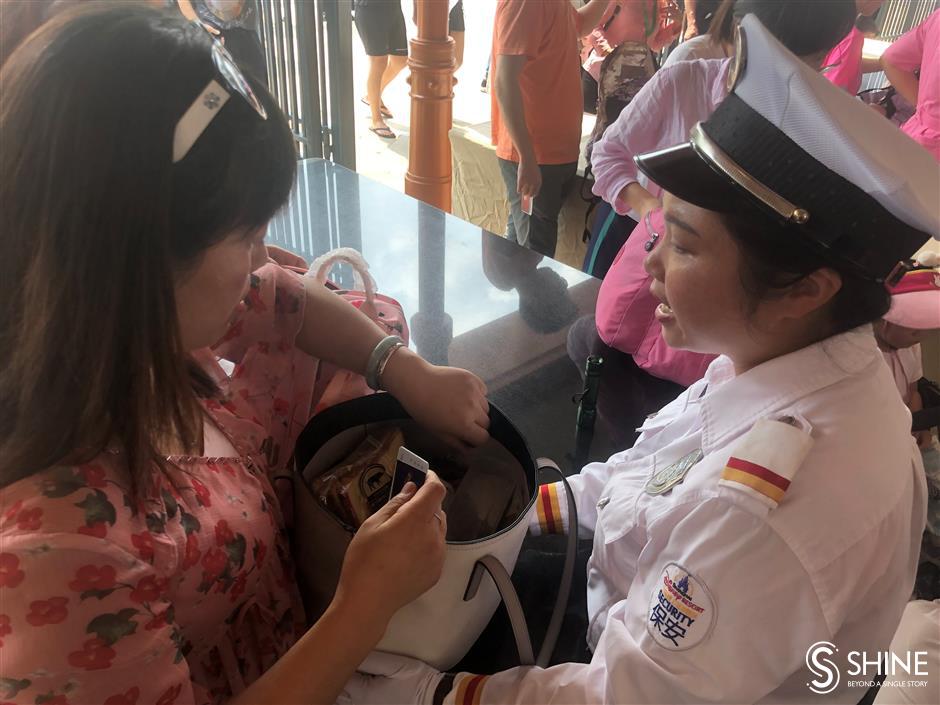 A woman opens her bag for check. 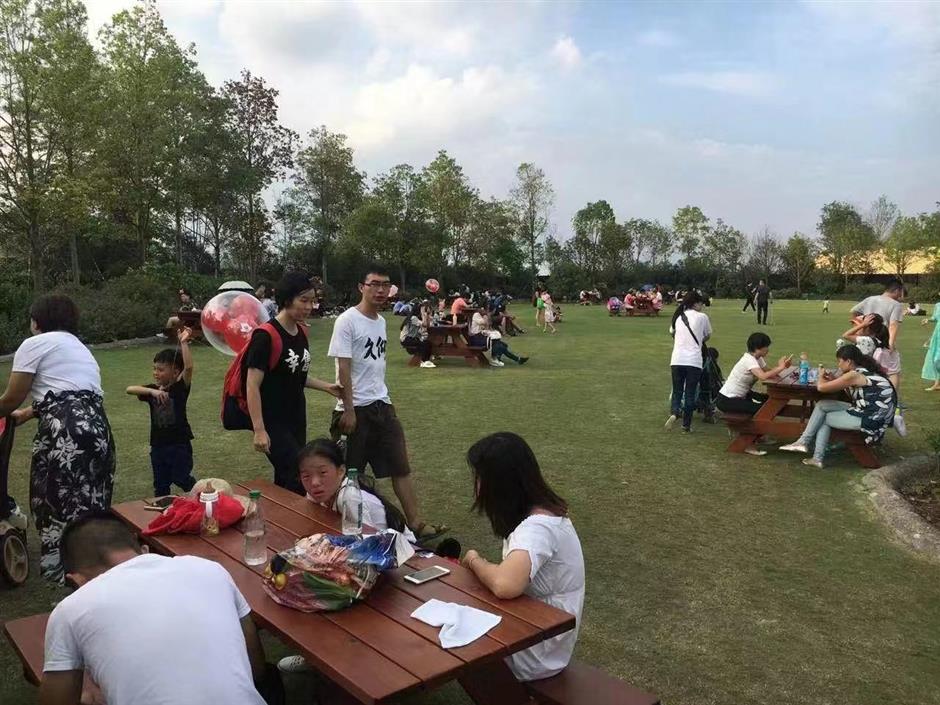