The guiding light in carrying Shanghai's message to the world

When I first joined Shanghai Daily in 2006, I was somewhat shocked to hear raised voices in English, sometimes quite heated, when editors congregated for the 4pm news meeting.

I looked around and saw more experienced colleagues just getting on with their work as though nothing was happening. They told me I would get used to the daily scrum where decisions were made on which stories should go on the front page and which stories were poor and should be ditched.

Amid what seemed chaotic at the time, Zhang Ciyun, a founder of the paper and its editor-in-chief for years, sat there calmly and let it all play out.

“Through such debates, Chinese reporters and editors grew to understand what interests foreign readers and why,” said Zhang, who is better known as just Peter around the office.

“Shanghai Daily is essentially a service for readers, so we needed to stay close to our readers,” said Zhang, now retired. “A top story for a Chinese newspaper wasn’t necessarily what should be on the front page of Shanghai Daily. No matter what era we work in, a journalist’s first duty is to readers, to give them what they want to know and address what concerns them.” 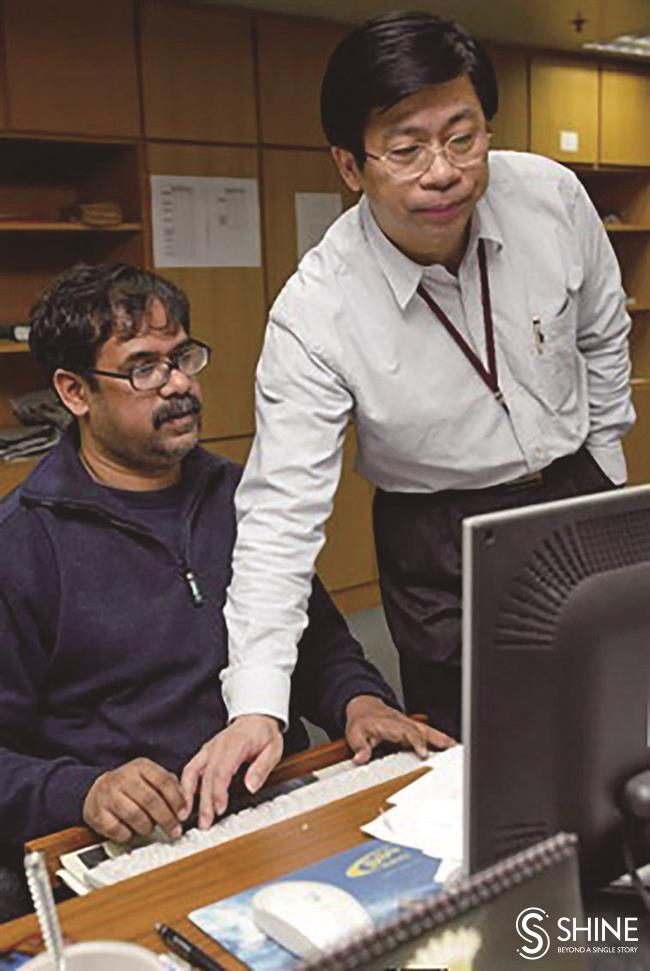 His words resonate with me. I think back about my own debates with editors over the years — from simple things like why certain terms need to be explained or given context because they may be unfamiliar to foreign readers, to bigger issues of what constitutes the best stories for English-language readers.

That was not because he was the big boss but rather was a sign of the respect he commanded, according to Bivash Mukherjee, a veteran polisher with the paper for 20 years.

“When Peter spoke, there was hushed silence,” he said. “He was clear and precise, to the point that very few questions were left to be answered.”

The editorial team at Shanghai Daily comprises Chinese reporters and editors, and a handful of foreigners with journalism backgrounds. They complement one another’s blind spots.

Zhang was particularly adept at balancing the interests of all aspects including the readers. He set forth the guiding principles of the paper but was never afraid of new ideas on how to improve it.

“Our reporting should be focused on business stories, haipai (Shanghai-style) culture and regional news,” he explained. “When anyone, be it Chinese or foreigner, looks at Shanghai, the first thing that comes to mind is its economic prominence, which reflects the country at large. Foreign readers are also interested in Chinese culture, and Shanghai has a very unique and inclusive culture to show them. No foreign or domestic media have the experience and insights that we brought to covering Shanghai for English-language readers. It was our responsibility to do the job well.”

When Su Yanxian, one of the original reporting team 20 years ago and now a news department head, showed me the notes from her initial training at the paper, I saw that most of the reporters back then came with only English-language education but little or no training in journalism. They had to learn from scratch.

“When I started preparing for the launch of an English-language paper in Shanghai, back in 1992, I knew instantly that I needed to prepare the talent for it,” Zhang said. “Not just a team for daily reporting, but also a team good enough and big enough to handle major international events that would definitely be happening in the city in the coming years. At the time, fewer than 20 people in the city had English-language reporting or editing experience in TV, radio or print. That was silly.”

Zhang was executive deputy editor-in-chief at China Daily when proposals for launching an English-language paper in Shanghai began to appear on the agenda of municipal government meetings. He happily answered the subsequent call to return to his hometown to spearhead the new paper.

“Before 1949, there were more than 30 foreign-language papers in the city, in English, French, German, Japanese and some others,” Zhang said. “That was very unusual in an Asian city.”

He noted that the first English paper to appear after the founding of the People’s Republic of China in 1949 was Shanghai News, launched shortly after North China Daily News closed.

The first attempt was a collaboration with China Daily called Shanghai Star. It came out twice a week, which Zhang felt didn’t adequately reflect the rapid development and emerging prominence of the city. 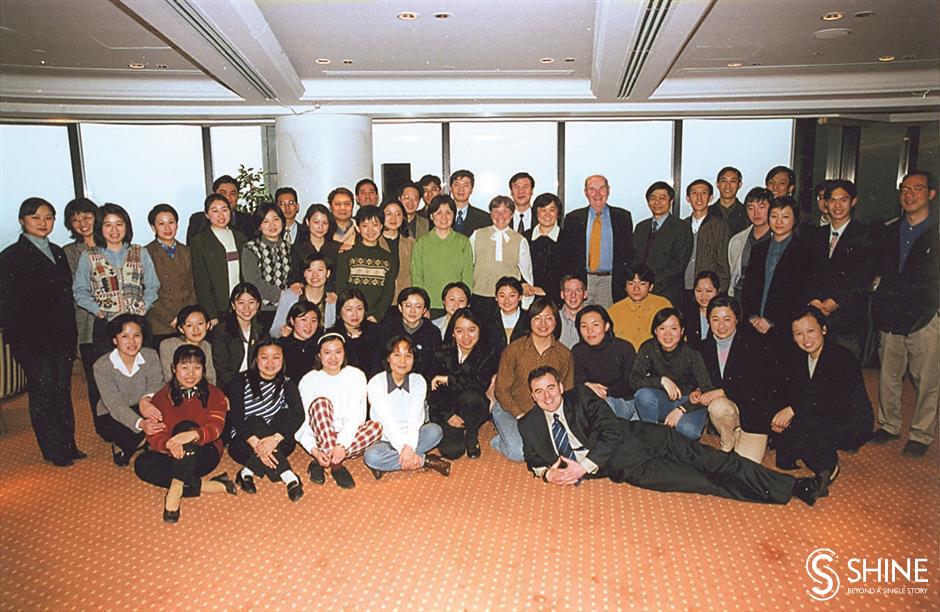 The first group of reporters and editors pose with foreign journalists who conducted six months of training.

A major international event was looming at the time. The Fortune Global Forum was coming to town in September 1999, with more than 300 heads of multinational companies expected to attend. Zhang promised then-Mayor Xu Kuangdi that Shanghai Daily would be ready to roll, giving forum participants updated news.

The paper’s reporters were mostly university seniors when they were recruited in March that year. They received months of training under veteran journalists who had worked at The Scotsman, Bloomberg and other foreign news organizations.

Reporters were dispatched across the city to gather news. Their task was not easy. It was a time when many foreign companies were just entering the market and not ready to talk to the media, and when many Chinese companies didn’t have media or public relations departments.

Shanghai Daily had a trial launch just before the forum convened and then was officially launched on October 1, 1999. As the reporters and editors matured, the paper itself became a formidable player in China’s media.

“Of course, back in the 1990s, I had no idea World Expo would be in town in 2010, but I was glad that we had honed our editorial talent by that time,” Zhang said. “For an entire six months, we were publishing our regular Shanghai Daily along with an eight-page Expo Daily.”

Zhang Ciyun (left), former editor-in-chief of Shanghai Daily, and Jiang Jianjun, his former deputy, read through the final proofs of the paper in 2000.

The depth of the paper’s talent has been demonstrated by Shanghai Daily alumni who went on to distinguished careers.

“When I visit TV stations, foreign media and multinational offices in Shanghai, I see many familiar faces,” Zhang said.

“Peter was the guiding light of the paper,” said Sue Hill, a founding polisher at the paper, who now lives in Australia. “He led by example, infusing the paper with his own principles of integrity, dedication and quality in news reporting. His big heart and friendly demeanor belied a steely determination to strive for excellence.”

The past may be glorious, but what about the future of Shanghai Daily in the digital age, when news has become such an adjunct of social media?

“It’s very different now from when I was a reporter,” Zhang said of the newspaper industry.

“Back then, the top priority and the top honor was a scoop. That’s almost impossible today. But when news breaks elsewhere, we can still do exclusive, in-depth analysis and news features. Journalism is not a dying business. It is still booming.” 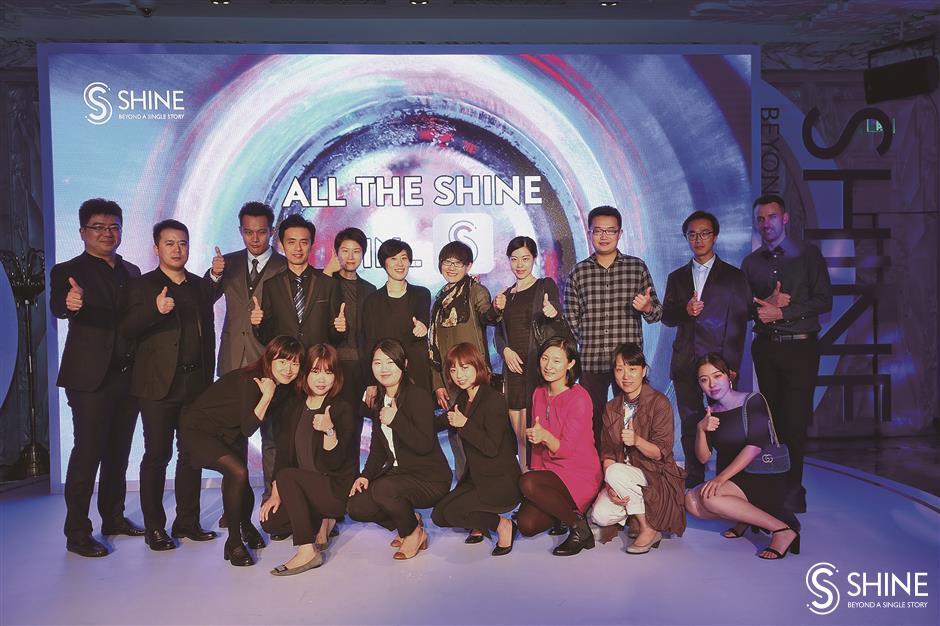