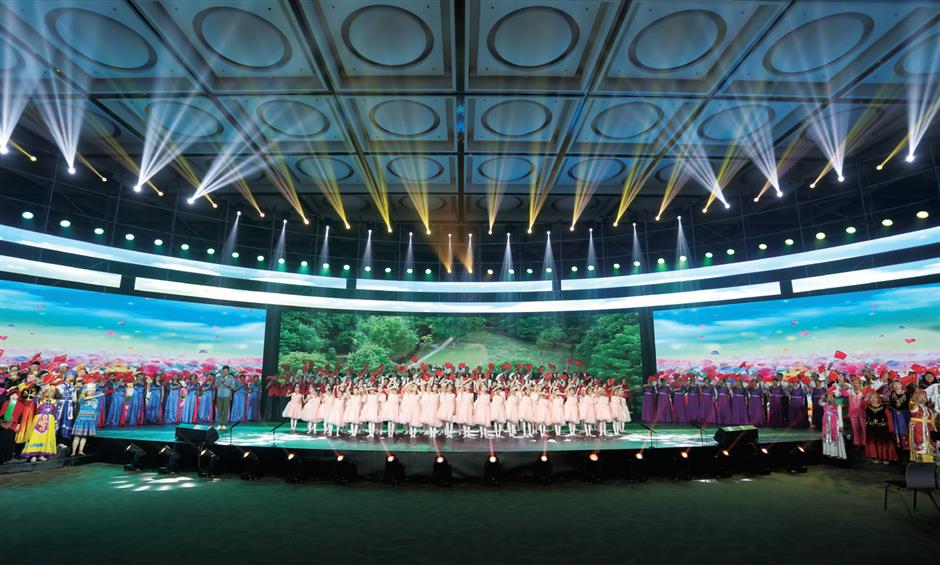 The closing ceremony of the 2019 Suzhou Creek Culture and Art Festival was held on October 11 as part of the National Day celebrations.

Putuo officials and residents celebrated National Day on October 1 by watching a live broadcast of the parade at Tian’anmen Square in Beijing and sharing their feelings on the pageantry.

More than 100,000 military and civilian participants gathered at the heart of the capital on the morning of October 1 for the military parade and mass pageantry to celebrate the 70th anniversary of the People’s Republic of China. President Xi Jinping made a speech and reviewed the armed forces.

Putuo Party Secretary Cao Liqiang, Director Zhou Minhao and other officials listened to the speech and watched the live broadcast.

“Putuo will further enhance the satisfaction, happiness and security of its residents,” Cao said.

The Premier International Cinema at the Global Harbor Mall presented a 4K high-definition live broadcast of the parade. Many residents braved the rain to watch the pageantry at the theater.

“I was too excited and got up at 6am to come to the cinema to watch the parade,” said Sun Jieke. He arrived at the cinema an hour early for fear that typhoon Mitag might disrupt the traffic.

Residents, volunteers and residential committee officials gathered at the community activity room at Caoyang Community to watch the broadcast.

Zheng Cuiping, a model worker among the first batch of residents in the Caoyang Community, China’s first workers’ community built in the 1950s, watched the parade with tears in her eyes.

“We can feel the tremendous changes of our country through the improved environment of the community and living standards in the past seven decades,” Zheng said.

Residents in Zhenru Town gathered at a public canteen to watch the parade together. Li Zuntai, who was born on October 1, 1949, the same day the People’s Republic of China was founded, said people’s lives have been enriched with the development of the country.

“I always feel proud to have my birthday on the National Day,” she added. 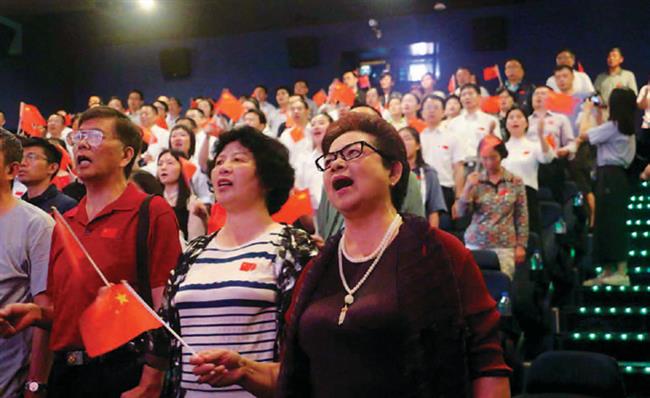 People across Putuo District watch a live broadcast of the military parade at Tian’anmen Square on October 1 to celebrate the 70th anniversary of the founding of the People’s Republic of China. 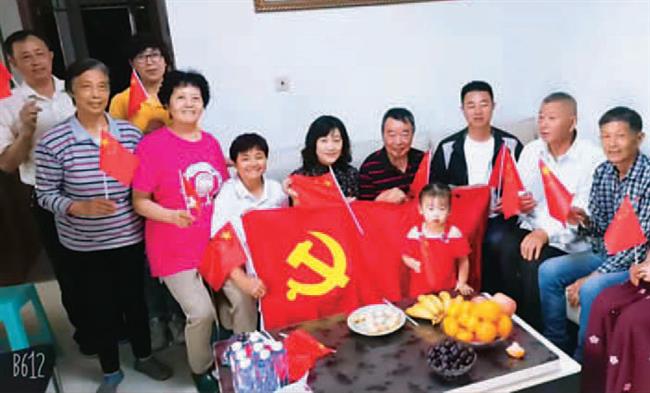 People across Putuo District watch a live broadcast of the military parade at Tian’anmen Square on October 1 to celebrate the 70th anniversary of the founding of the People’s Republic of China.

The Information Office of Putuo launched a short video about the district’s achievements in economic development, social welfare and scientific innovation in the past seven decades.

A painting and calligraphy exhibition at the Liu Haisu Art Museum Putuo branch displayed over 200 artworks from over 150 artists about China’s great achievements.

Residents in Changzheng Town were encouraged to take part in a singing competition of patriotic songs, while 70-year-olds in Taopu Town were invited to a group birthday party.

Around 500 employees of local businesses competed in a relay race at the city’s largest downtown public greenbelt in Taopu Smart City in Putuo to celebrate National Day and the area’s redevelopment.

The closing ceremony of the 2019 Suzhou Creek Culture and Art Festival was held on October 11 as part of the National Day celebrations. Singing, dances, stage dramas, martial arts and traditional Chinese opera shows showcased the great achievements of Putuo and improvement of people’s living condition in the last seven decades. Over 1,200 performers and audiences sang a patriotic song together to mark the closing of the annual culture and art festival at the end of the event.