Jiao Yigang has been making qipao, the body-hugging Chinese dress, for almost 40 years. The 59-year-old was honored as an inheritor of the national-level intangible cultural heritage of Longfeng qipao handmade skills in 2017.

"The traditional Longfeng qipao involves nine techniques such as rolling, engraving, embroidery and drawing," said Jiao. "Engraving is the most difficult."

A handmade qipao, also known as cheongsam, takes at least five days to finish, but it can be much longer depending on the techniques employed, he said.

A silk wedding dress, for example, took more than six months a year to finish.

"If it involves flower embroidery, it takes at least a month," Jiao said.

"Making qipao is a kind of accumulation of study, and you need to keep learning as a craftsman," said Jiao.

At the China International Import Expo, cheongsam buttons called pankou and frog fasteners will be on display.

"Pankou is the last technique of qipao, but also its most distinctive feature," Jiao said. "After the button is sewed onto the qipao, the work is finished.

"Pankou must add points to the qipao, and it is described as the 'eye' of the cheongsam.”

There is a trend of making pankou into souvenirs.

At the exhibition, a number of pankou with Shanghai elements such as the Oriental Pearl TV Tower, the China Art Museum, the city’s magnolia flower and shikumen (stone-gate building) will be on show.

A single pankou can take two to three days to make if it involves complicated patterns.

Longfeng qipao, with a history dating back more than 80 years, is known for its masterful cutting and delicate embroidery.

"Qipao is a favorite by foreign guests because of its strong traditional Chinese elements," said Jiao.

He has passed on his skills to many students.

"I spend my life in maintaining and preserving the qipao-making techniques passed on by our ancestors, and I want to pass them from generation to generation," he said. 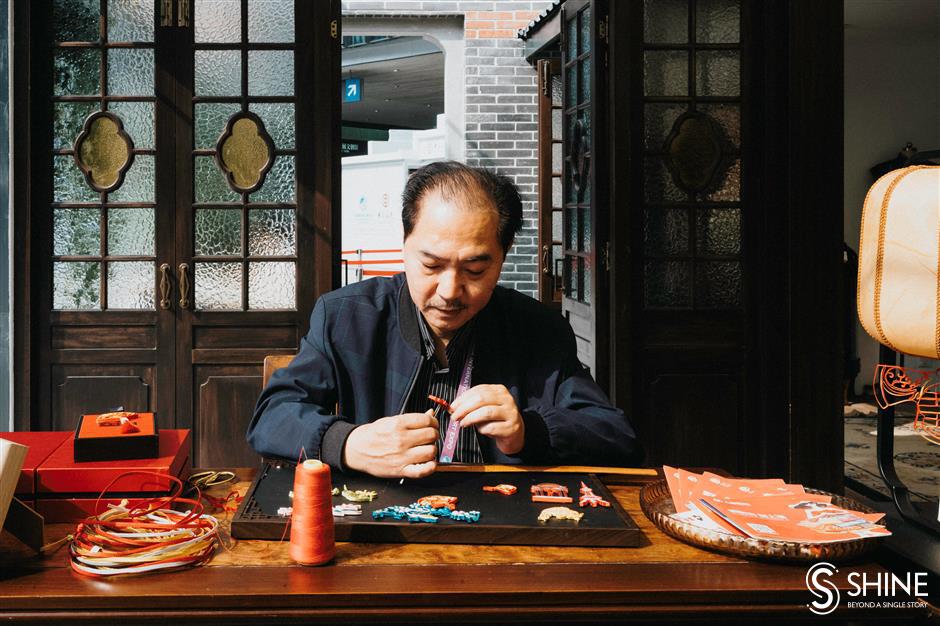