Skilled workers the best across the nation

Two Jiading residents, Zhuang Jianping from Xuhang Town and Xu Jie from Jiangqiao Town, won first prizes in the mechatronics and desktop publishing categories, respectively, the first time that entrants from the district had won a first prize.

Zhuang was first designated to take part in the data processing category, but it was canceled and, as a result, he changed his category to mechatronics for which he had only two weeks to prepare. Even under such conditions, Zhuang still achieved the first prize. The result wasn’t a coincidence, but Zhuang’s effort of over 20 years. 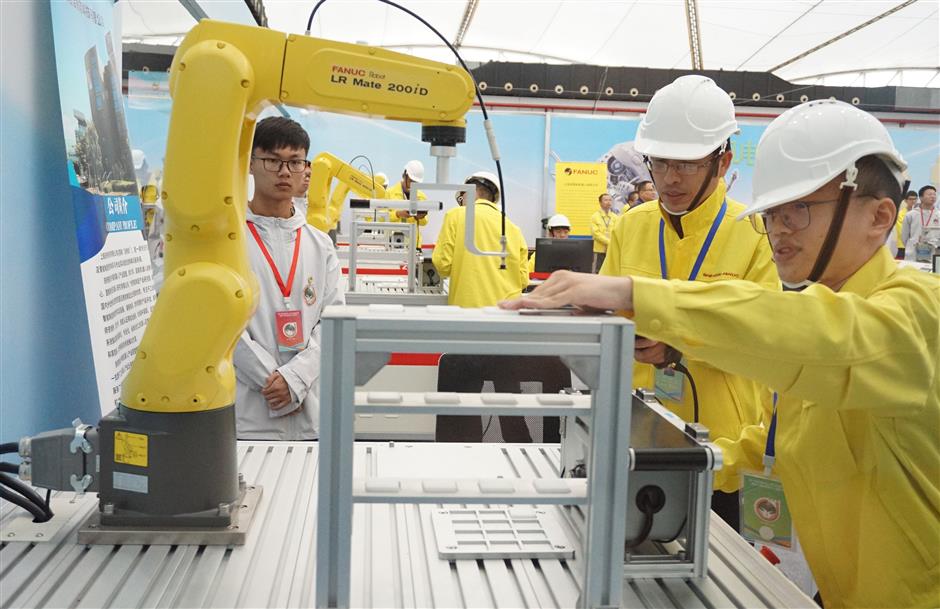 Pictured during the skills competition, Zhuang Jianping (second from right) from Xuhang Town and his teammates are busy programming and testing a mechanical arm.

Zhuang, who is 41, was diagnosed with ankylosing spondylitis, a type of arthritis in the spine, when he was just 26. The news of this debilitating condition was a devastating blow to the young man, but he didn’t lose hope. He continued with his studies while working during the day. After graduation, he went on to study business management and achieved his certificate in accountancy. Today, he is an accountant working for a company.

It may seem that accountancy has nothing to do with mechatronics, but Zhuang programmed a new application for the company to increase the efficiency of form submission and statistics by using his knowledge of the subject. This ability was also the key to his success in the skills competition.

In his team, Zhuang was responsible for programming a simulated module and then importing the program to actual robots. “I felt very nervous before the competition. But when I devoted myself to the contest, I calmed down and became confident,” Zhuang said.

During the four-hour competition, he finished programming handing, stacking and coating for the robot, and manipulated a mechanical arm to do the designated actions. Zhuang got the highest marks for his completion and accuracy.

“It never occurred to me that I could get a national award. I felt extremely excited after knowing the result,” said Zhuang.

Xu, Jiading’s another prize winner, was taking part in the competition for the first time. He ascribed his success to diligence. Born in 1980, Xu became deaf when he was just 2 years old. 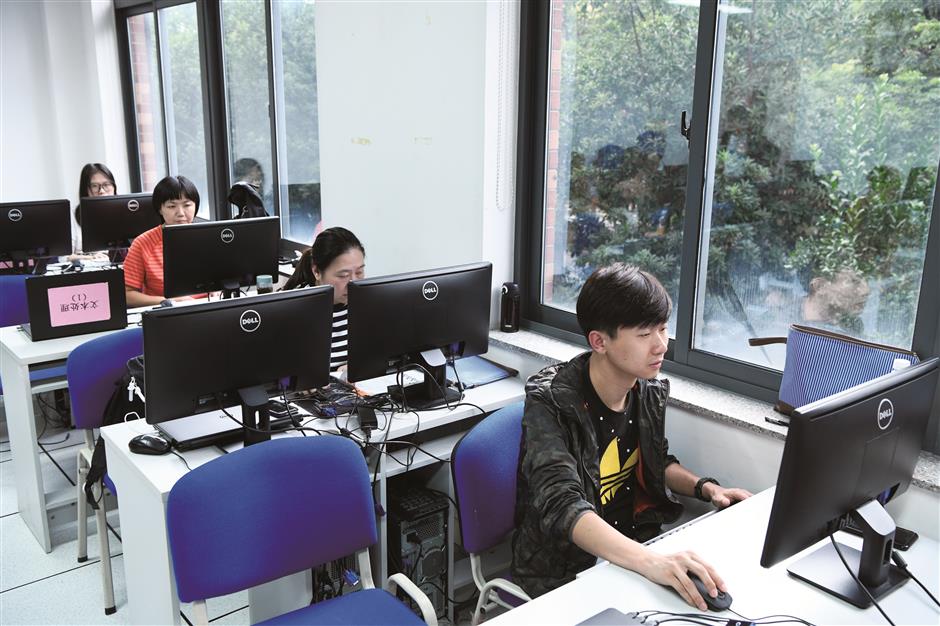 Xu Jie, from Jiangqiao Town, concentrates on designing on computer during the competition.

He became fond of painting in his high school years. In his silent world, Xu could only use his eyes to observe teachers’ painting gestures and techniques. Sometimes he would write on a piece of paper to communicate with his teachers.

After having to work harder than most students, he was admitted to the Shanghai Institute of Technology’s School of Art and Design, and furthered his studies at the Fine Arts College of Shanghai University. After graduation, he started work at an advertising company, designing advertisements, the layout and binding of books, and video production.

He has been with the company for 15 years and has the respect and admiration of his colleagues for his devotion to his work.

It took Xu four months of training to pass the selection process for the Shanghai round of the skills competition. Although this was the first time he had been involved in a national competition, his confidence was unwavering.

Everyone who knows Xu is proud at his achievement. After the competition, a member of another Shanghai group of participants wrote down a sentence for him: “Efforts will always pay off.”

“I want to give my gratitude to everyone who has helped me,” said Xu.