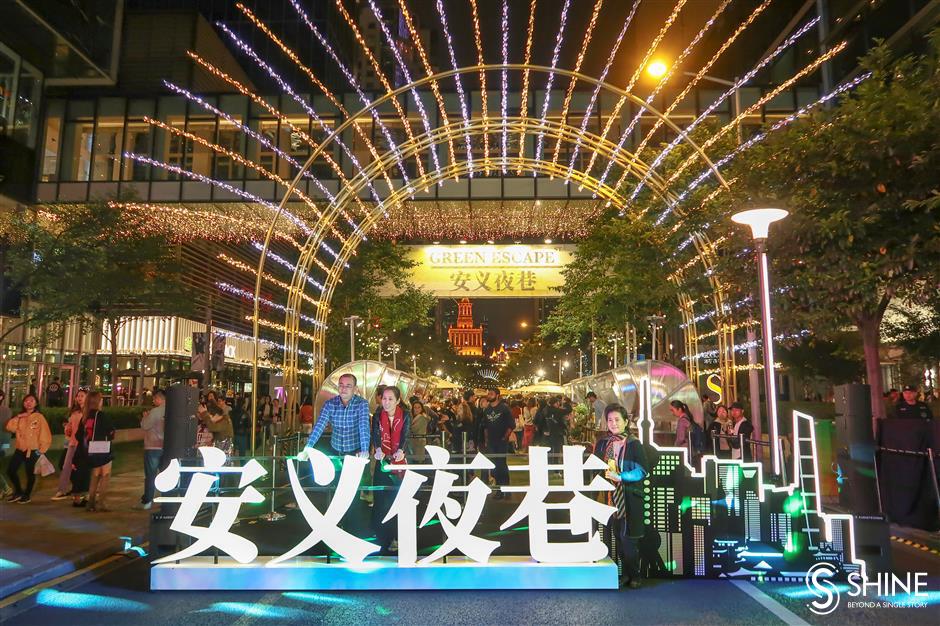 The newly opened night street fair on Anyi Road has become the go-to place for locals and tourists.

When the daylight disappears, the fun begins

A pop-up pedestrian-only night street fair in the downtown Jing’ansi area is part of the city’s ongoing campaign to revitalize its nightlife without creating the boisterous mayhem of the past.

The fair, officially opened to the public this month, is being held on Anyi Road, a 264-meter-long, otherwise quiet lane between Changde and Tongren roads. It features games, stalls, snacks and entertainment in a buzzy neon-lit setting.

The fair follows a Shanghai Commerce Commission decree last September that designated certain areas as “landmark nightlife areas.” Two are in Jing’an: the Jing’ansi area and the area encompassing Wujiang Road, Zhangyuan Garden and Xintiandi-style Fengshengli. The sites are especially popular with foreign residents and tourists.

Open only on weekends, the new pop-up night fair will run from 4:30pm-midnight on Saturdays and 2:30-10pm on Sundays, through January 19. Everything will be packed up and carted away in the wee hours of Monday so that cars can resume driving through.

The fair is certainly proving a hit with the public.

On one Saturday night, the lane is jammed with locals and visitors. Strolling, often with beer or snacks in hand, they stop to watch performances, peruse the merchandise at sales stalls and play games.

For the occasion, the street is paved with artificial grass and decorated with seasonal features such as orange blossoms and pumpkin-sized installations for people to take photos. It has the feel of an autumn garden with an artistic flourish.

Some of the city’s wanghong, or Internet celebrities, sell seasonal blossoms such as ping-pong chrysanthemums and pink hair grass.

“It’s so beautiful,” says Lilian Li as she queues in front of Aura Lab to buy flowers.

“I am so impressed by such a beautiful scene that I just want to buy a bouquet.”

An emerging florist, who has gained wide popularity for initiating the concept “Ready to Flower,” sells bouquets. They attract all age groups, including a local resident surnamed Wang, 62.

“Everyone is here to buy flowers,” she says. “So I came to have a look, and I decided to buy some as well.”

The two sides of the street are dotted with stalls offering food from around the world, including seasonal delicacies such as pumpkin pie, grilled Western-style sausages and traditional Chinese fried dough.

Games such as ring toss are popular, reminding many of childhood experiences in amusement parks. Street artists walk around interacting with people. Live performances are staged. From tents, young local designers sell handmade clothes and accessories.

Benches are available for those needing a rest or a place to munch on snacks. Litter bins, decorated as mailboxes, are conveniently placed nearby.

“It’s amazing,” Nicole Lambert, from California, says of the atmosphere.

With a serving of chicken wings in one hand and a cup of beer in the other, she says she has never seen anything like it before.

Officials at the Jing’an Commerce Commission said they want to create a great weekend event where people can gather and have fun. Future weekends will feature fashion shows and themed events like a Christmas lighting festival.

The night market is an interagency effort. Police officers are mobilized to redirect traffic every weekend, and extra cleaners are dispatched to ensure the street is back to normal by 5am on Monday.

Shanghai has long been known as a city that never sleeps. But over the years, nightlife degenerated into boisterous late-night bars and rowdy eateries, where music blared and merrymakers spilled out onto the sidewalks and even streets. Neighbors complained about the noise and the often-coarse behavior of revelers.

The city conducted a crackdown, closing many of the bars and eateries. But as the noise disappeared, so, too, part of the city’s soul.

Authorities view a sparkling night scene and prosperous night economy as an essential part of Shanghai. After conducting numerous surveys, they issued new policies trying to find some middle ground. For example, some neighborhood bars are now allowed to have outdoor tables during specified periods. 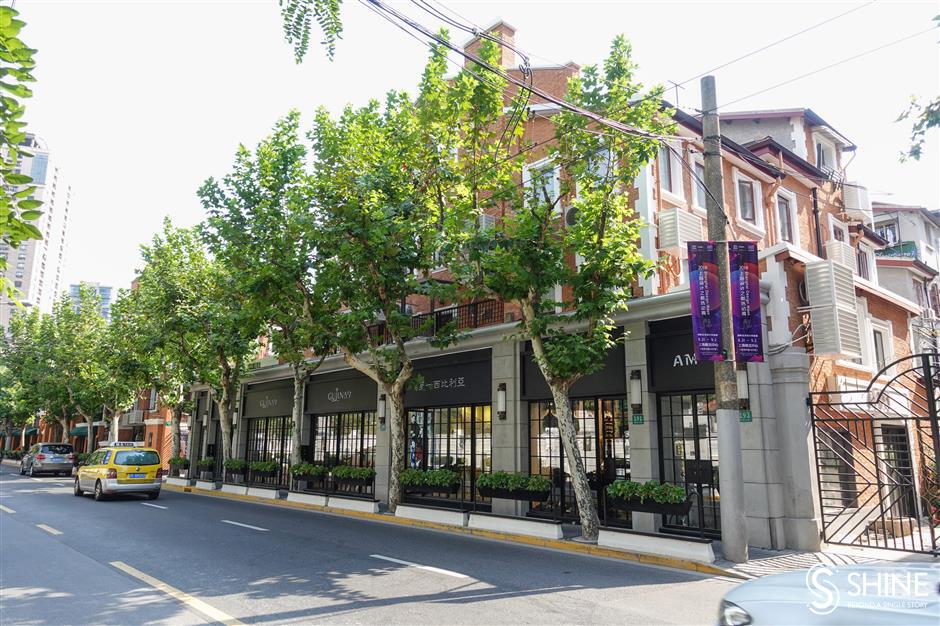 After a major facelift, the southern end of Shaanxi Road N. has turned into a smart row of 17 time-honored shops selling traditional brands with modern marketing strategies.

Back roads move to the forefront

Of the many backstreets that feed into bustling Nanjing Road W., Anyi Road was easily overlooked for a long time. Now it’s achieving a high profile as a new nightlife hot spot.

It’s all part of efforts by Jing’an to spruce up the small alleyways off main avenues.

According to district officials, the backstreets need to be revitalized with their own distinctive features.

Wujiang Road, parallel to Nanjing Road, is perhaps one of the most popular backstreets.

Formerly just another short alleyway with old residences and grocery shops, it became known in 1990s as a food street, dotted with barbecue stalls, dumpling shops and other eateries.

Yang Lipeng said her food empire started from a shop on Wujiang Road, selling shengjian, a popular local pan-fried dumpling. Today the Xiaoyang Shengjian chain has opened more than 200 outlets across China and is Shanghai’s most renowned shengjian brand.

“I started my business in a small, old roadside shop,” she said. “In around 2000, the district spruced up the road, and the whole environment improved. From 2009, more office workers became our customers.”

This year, the road was closed for another upgrade, adding self-service stores, pop-up stores and other crossover projects. It will feature innovative landscaping, including green roofs and graffiti on facades.

According to the Jing’an Commerce Commission, it will reopen to the public next year.

Shaanxi Road N., another popular backstreet off Nanjing Road, had its renovation completed in 2018.

The stores have retained their traditional charm while embracing modern retail concepts to keep pace with a highly competitive, rapidly changing marketplace.

Haute-couture services are available for people to order tailor-made clothes, and workshops are set up inside stores for people to view traditional skills, such as making sachets and herbal tea.

Lei Yun Shang, the oldest brand in Jing’an, was the first of the venerable names to try something new.

The pharmacy has two traditional Chinese medicine robot “doctors.” They can scan facial complexions, do tongue diagnosis and talk to patients. They draft medical reports and dispatch them to specialists at the Shanghai University of Traditional Chinese Medicine.

The 101-year-old Hongxiang, a pioneer in Chinese women’s fashion, has a 3D-fitting mirror for customers for assessing how clothes will look.

The efforts have paid off. Retailers on the road have reported an annual 80 percent increase in sales.

Other backstreets are waiting in line for overhauls.

One of them is Yuyuan Road, home to traditional alleyway houses, garden villas and former residences of famous people. It will be renovated as a community of dessert bars, book cafes and workshops conducting classes in painting, flower arrangement and the tea ceremony. Sculptures will be erected in public spaces.

Nanyang and Fengxian roads behind the established shopping malls of Westgate Mall, CITIC Square and Plaza 66 will also undergo renovation.

This area will be turned into a trendy section with boutique shops, designer brands, vintage stores and popular eateries. Cherry trees will be planted along the roadside, enhanced by special-effects lighting.

Tongren Road, opposite the Jing’an Kerry Center, is set to be the home of high-end galleries, museums and auction houses.

Weihai Road, home to local media giants like the Shanghai United Media Group and Shanghai Media Group, will be redeveloped as an incubator for digital media.

Xikang Road will be an international sports neighborhood, with the Jing’an Gymnasium, 24-hour self-service gyms, sports retailers and healthy-diet restaurants.