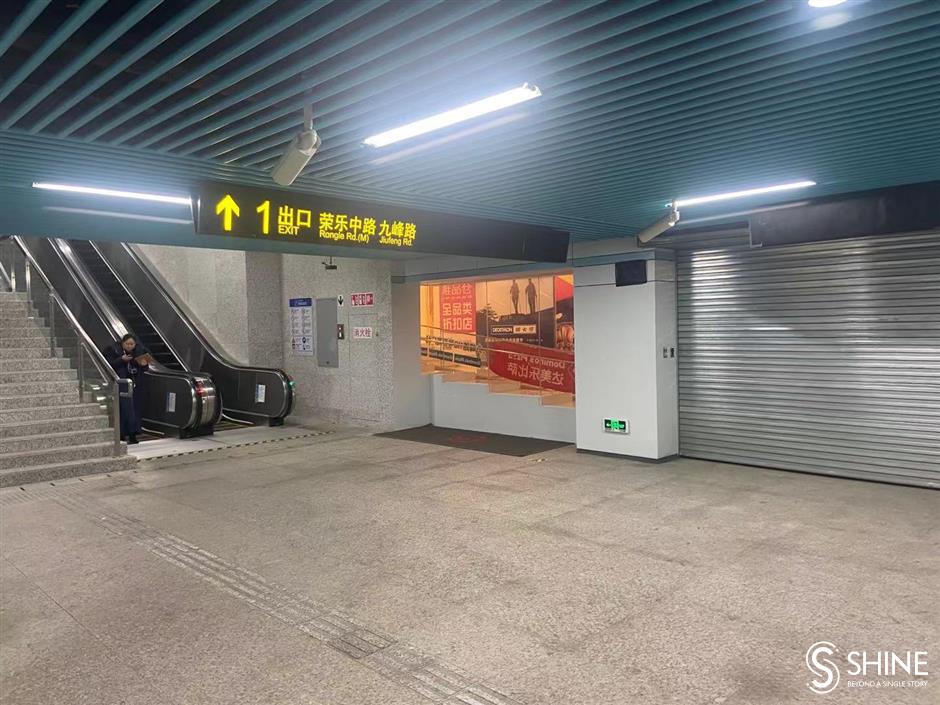 An accessible passageway for disabled people at Metro Line 9's Songjiang Sports Center Station is blocked by a rolling shutter.

People shopping in the Pinggao Plaza, above Metro Line 9’s Songjiang Sports Center Station, may find it odd that if they follow signs in the mall to go to the station via elevator, they encounter a dead end.

A shutter door blocks the underground passageway from the mall to the station.

An escalator leads to the station exit beside the blocked passageway. And from the exit, it is only about 30 meters before one enters the mall.

But for disabled people, the blocked passageway leads to the only wheelchair access point in the station.

A Shanghai Daily reporter went to the station on Monday. Within ten minutes, more than ten people went to the passageway via the elevator but were blocked by the shutter.

“The mall opened in 2017, before that the Metro station had only two exits,” said Wang. “We built the new exit connecting the station and the mall.”

The passageway and Exit One opened in August. Wang said they prepared all signs, but the Metro wouldn’t open the shutter. 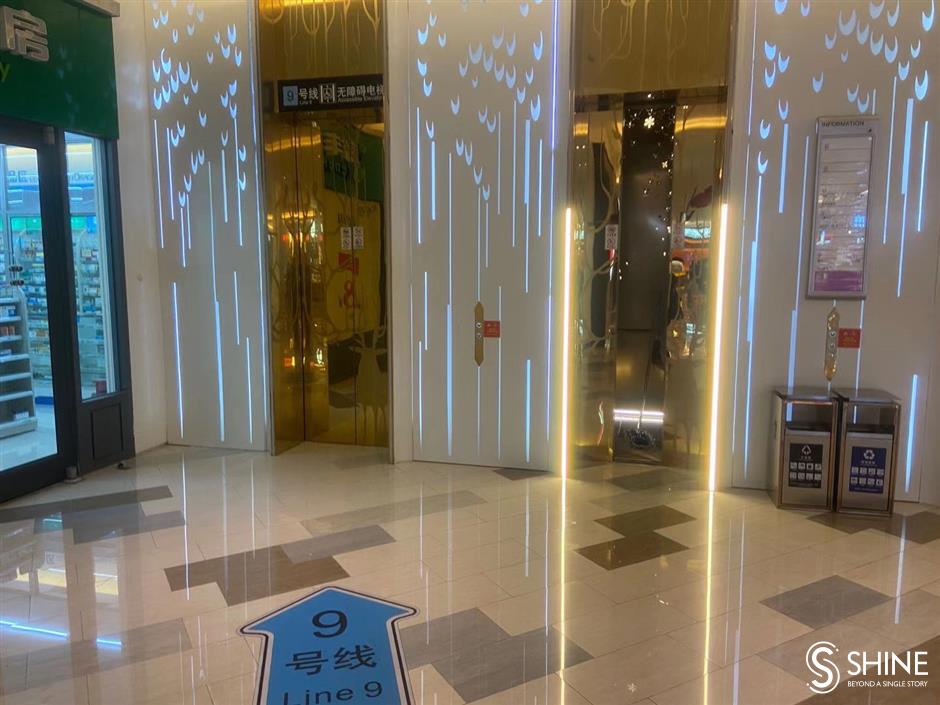 An elevator which leads to the accessible passageway of the station was built inside the mall instead of directly opened on the side of the street.

Yet the Metro operator has a different point of view.

According to Shanghai Shentong Metro Group, they usually work with shopping malls on the passageways and exits.

“When the station started operation in 2012, the mall was still under construction,” said an official from Shanghai Metro. “so we asked the mall to build the exit.”

But according to blueprints, the accessible elevator and passageway should lead directly to the street outside the station.

“They didn’t follow the plan, which could be problematic when authorities check and examine the construction,” the official said. “We never agreed to that, and all the signs were put up by the mall without notifying us.”

"We don't even know if the mall's elevator is wide enough to allow a wheelchair," he said.

Shanghai Metro also claims the spot where the original elevator was planned is now a pharmacy.

The Metro operator said with the elevator inside the mall, there is another tricky problem. The shopping mall opens at 9:30am and closes at 9:30pm, but the first train arrives at the station at 5:47am and the last leaves at 12:08am, by which time the mall is closed.

“What if a passenger in a wheelchair comes to the mall only to find it is closed and he cannot use the accessible passageway?” the Metro official said.

Wang could not confirm Shanghai Metro’s claim about the mall tampering with the blueprint of the passageway.

But Wang said time should not be a problem. “We have a cinema and a gym upstairs, both of which are open late,” according to Wang. “We have security guards in the mall 24/7 to make sure all passengers can get in and out of the mall via the elevator no matter when they come.”

Shanghai Metro said negotiations with the mall is still underway.

“If the mall is willing to open the elevator on the street instead of inside the mall, we are more than happy to open the shutter,” the Metro official said. 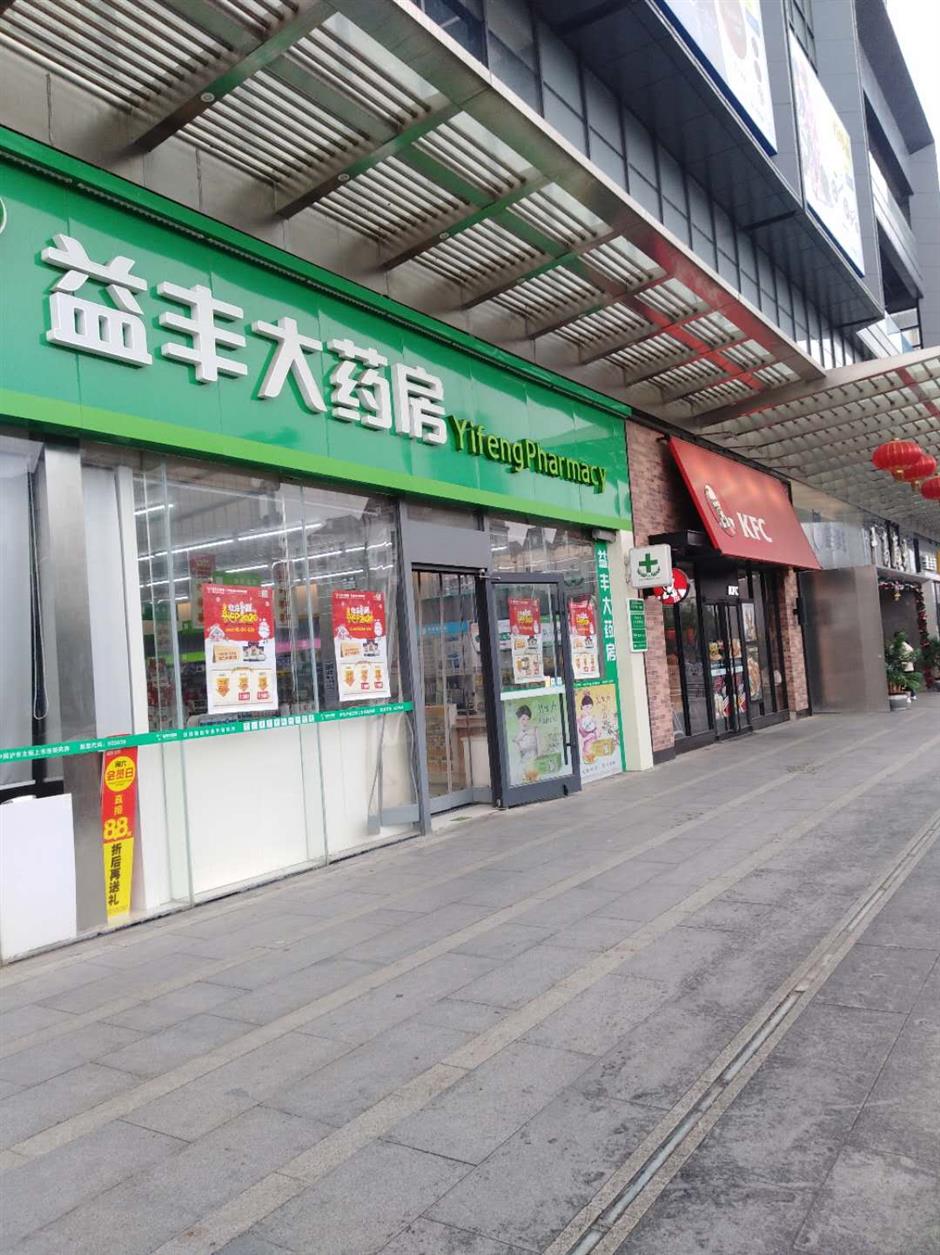 According to Shanghai Metro, a pharmacy occupies the location where the accessible elevator of the station should be.