This year, the joggers, hikers, dog walkers and anyone else who likes the out-of-doors will have access to the whole 42 kilometers of the Suzhou Creek riverbank greenway.

The project, overseen by the general office of the Shanghai Leading Group of the Huangpu River and Suzhou Creek, will finally be completed in 2020. It’s 85 percent finished already.

Unlike the Huangpu River, which grandly divides Shanghai into Puxi and Pudong, Suzhou Creek represents a more humble demarcation in the city. It’s about 30-40 meters wide, a 10th of the width of the Huangpu River at its narrowest point.

“If the Huangpu River is the living room of Shanghai that greets the world, Suzhou Creek is the backyard where people can snatch a little bit of leisure time in their busy lives,” said Zhao Jiong, head of the general office.

Creek greenway completion follows the opening of the 45-kilometer waterfront walkway along the Huangpu River, another major city beautification project.

The Suzhou Creek greenway stretches across six districts of Shanghai, from west to east.

Upstream from the creek is the Wusong River, which flows from Taihu Lake in Jiangsu Province. The creek then runs from Jiading to Hongkou, crossing Changning, Putuo, Jing’an and Huangpu. Eventually it spills into the Huangpu River under the Waibaidu Bridge near the Bund.

At the end of 2019, 35.8 kilometers of the Suzhou Creek greenway project were completed, the office said. The remaining portion is the difficult bit – connecting both sides of the creek, Zhao said.

He told Shanghai Daily that the creek doesn’t have the luxury of space that benefited the Huangpu River waterfront project. Most of the creek’s banks were jammed with residences.

“Changshou Road Bridge crossing the creek blocked the greenway on the east side of the creek,” said Zhao. “Yet beneath the bridge is the Beiheng Passageway under construction, which means to break the dead end, we have to follow the schedule of the passage as well.”

Wuzhen Road Bridge is another dead end for the greenway. Zhao said the bridge is quite old. Renovation will add an archway under it to allow people to pass.

Cramped space alongside the creek also raised challenges for the project. Officials had to factor in safety issues with landscape design.

“The flood control wall of the creek is set to be 5.2 meters high,” said Zhao, noting that it blocks part of the view of the creek. “We will build more waterside terraces near the wall so residents can enjoy the view while knowing they are safe from floods.”

After completion, the riverbank of the creek in Hongkou District will become a pedestrian area. Cars will be allowed in only to enter or leave two historic buildings along the way: the Broadway Mansion and the Shanghai Postal Museum. 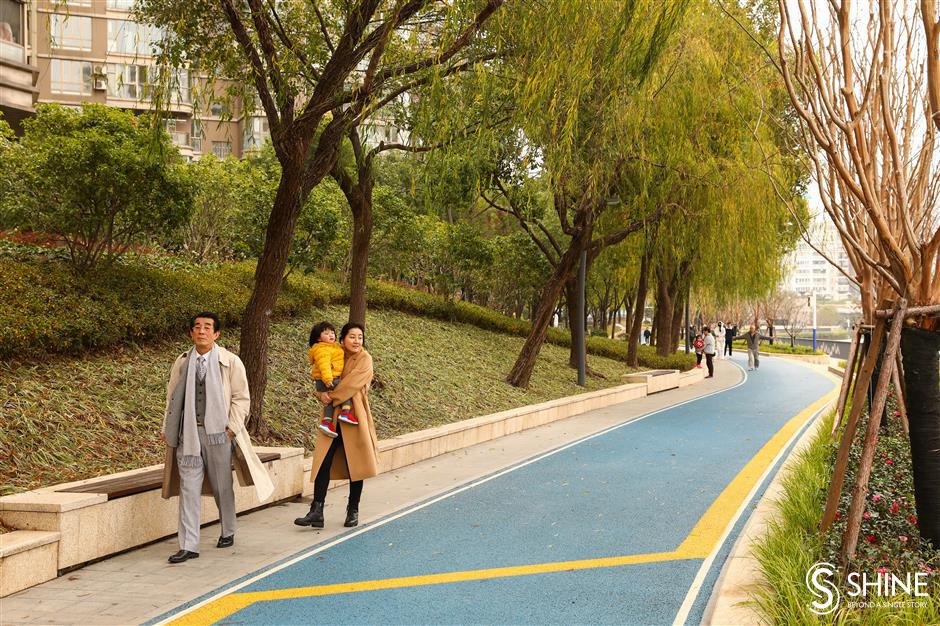 Residents in Putuo District walk on the greenway along the Suzhou Creek.

Half of the greenway will run through Putuo District. In wartime, when invaders threatened the city, Suzhou Creek was a cradle of many national industries. Thousands of factories were built along its banks in Putuo. Many of them have been demolished over time, but some remain.

Mengqing Garden is one of them. Once the site of the Union Brewery plant, the garden is now a museum and a water treatment plant that was originally built to drain water for beer-making. Now the facility is used to keep the creek water clear.

Not far from the garden is the M50 art hub, previously a cotton mill built by businessman Zhou Zhijun in 1917. After the factory finally halted production in 1999, it was transformed into a cultural park that now houses more than 140 art studios and cultural sites.

“For some parts, we have done a good job preserving the view and culture alongside the creek,” Zhao said.

Zhao told Shanghai Daily the creek greenway is part of the city’s campaign to beautify Shanghai’s waterfronts and create outdoor leisure areas for the public.

“If you look at the waterfront campaigns worldwide, the Huangpu River and Suzhou Creek projects are really huge,” he said.

In the future, waterfront reconstruction along the Huangpu River will be extended north to the river’s origin at Dianshan Lake in Qingpu District. When that is done, residents in Shanghai will be able to enjoy 120 kilometers of waterfront open to the public, said Zhao. 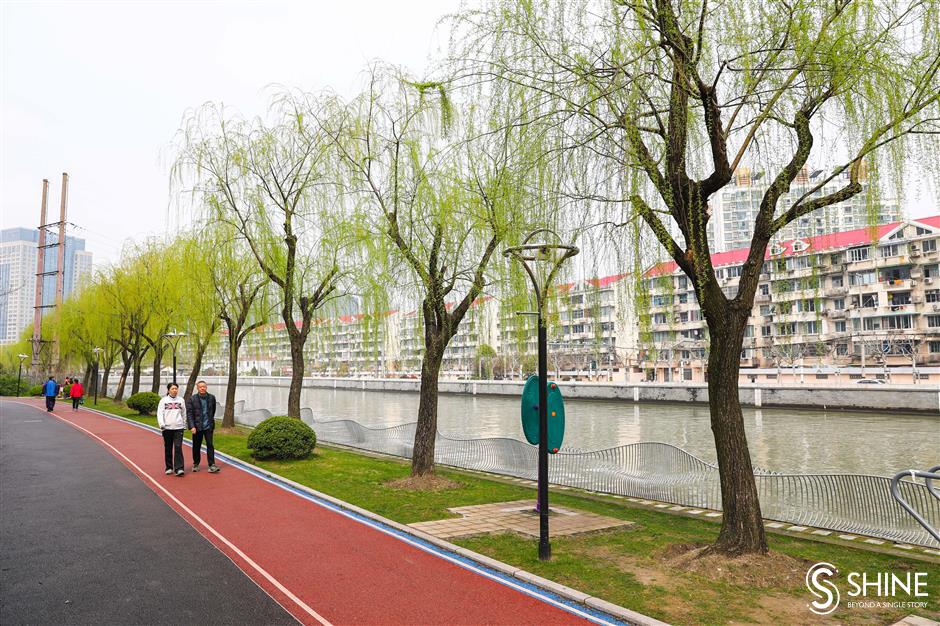 Residents in Changning District walk on the greenway along the Suzhou Creek.