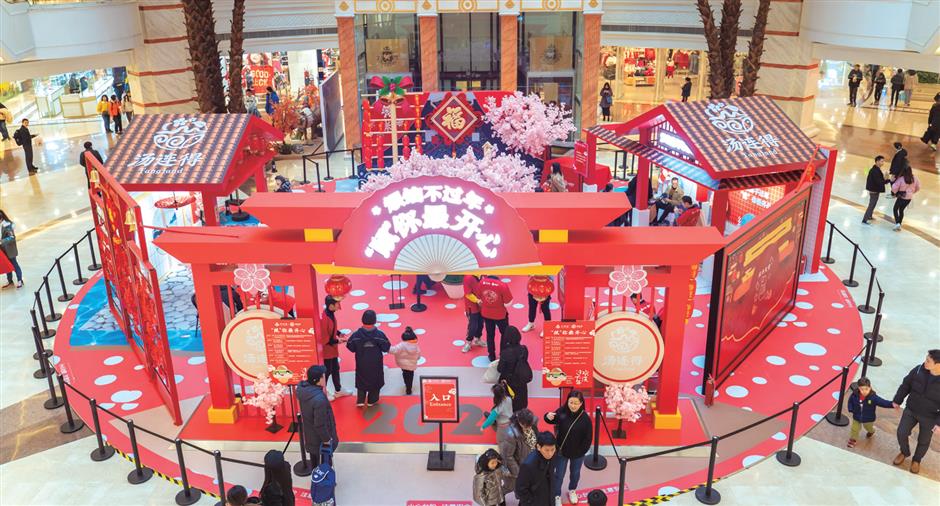 Shoppers have fun at the Global Harbor Mall where several activities are being held to celebrate the Spring Festival.

Popular shopping malls in Putuo District have launched a number of festive events to celebrate the approaching Year of the Rat.

The Global Harbor Mall has unveiled a series of celebrations through February 16 for the Spring Festival, or the Chinese Lunar New Year, which falls on January 25 this year.

The largest shopping complex in downtown Shanghai is adorned with hundreds of lanterns and flowers to create a festive ambience. A series of rat-themed events and promotions aim to attract customers from both home and abroad.

Customers can pose with an exhibition named “Flower Island on the Sea” at the mall through February 15. Guided by the flower and gardening association of Chongming District, the exhibit features over 50 breeds of flowers that bloom in spring. They include narcissus, anthurium, bromeliad and other flowers from Chongming as well as tulips, hyacinth and daffodils from abroad.

Flower experts and floriculture masters will give lectures and perform flower arrangement sessions for customers during the exhibition.

Ding Xiaoqiu, the mall’s cartoon mascot, will make its debut during the celebration. It will parade and pose with customers. Families can also pose at a flash mob store themed on rats between January 25 and February 19.

A major celebration featuring dragon and lion dances, as well as thousands of red packet gifts for customers, will be held on January 25. A grand parade celebrating the Chinese God of Wealth is planned on January 29, or the 5th day of the Chinese Lunar New Year, which is traditionally celebrated to welcome the god of fortune.

The mall says the event is inspired by traditional temple fairs to allow customers to experience the ancient Spring Festival celebration. Additional events will be held on February 14 for the Valentine’s Day, as well as the Lantern Festival on February 8.

Elsewhere in the district, the Bailian Zhonghuan Shopping Mall is celebrating its 13th anniversary with parades, lucky draws and promotions. MTR City Plaza is presenting events on Kumamon — a mascot created by Japan’s Kumamoto Prefecture. Imago Mall has invited senior calligraphers to write Spring Festival couplets and the character fu (which means good fortune in Chinese) for customers.