Coronavirus Disease Pandemic
The music video "Wuhan, We Are With You."

China's ongoing fight against the coronavirus outbreak has created a wealth of art, including a popular music video from a group of Shanghai American School students.

The song, entitled "Wuhan, We Are With You," is an ode to frontline medical professionals in Wuhan, capital of central China's Hubei Province and ground zero of the epidemic. It was composed by Matthew Cline, a ninth grader at the international school.

Cline, 15, first developed the idea of writing a song to show support for people in Wuhan when he learned of the gravity of the situation there from news and social media posts.

"Many people were left without masks," says the Canadian teenager. "It's really agonizing to see people suffer this much."

A music fan and amateur composer, Cline says he's keen to express gratitude to the "brave and selfless" doctors and nurses in a language he is well-versed in: music.

He is not alone in wanting to soothe souls and lift spirits. His musical buddies at the Shanghai American School were quick to join when he invited them to form a band.

Recording the song wasn't easy, as the student musicians were scattered across the globe in locations as far apart as Shanghai, Taipei and New York.

With their school remaining shut in the midst of the viral outbreak, the students are confined to their homes. Some have not yet returned to Shanghai. 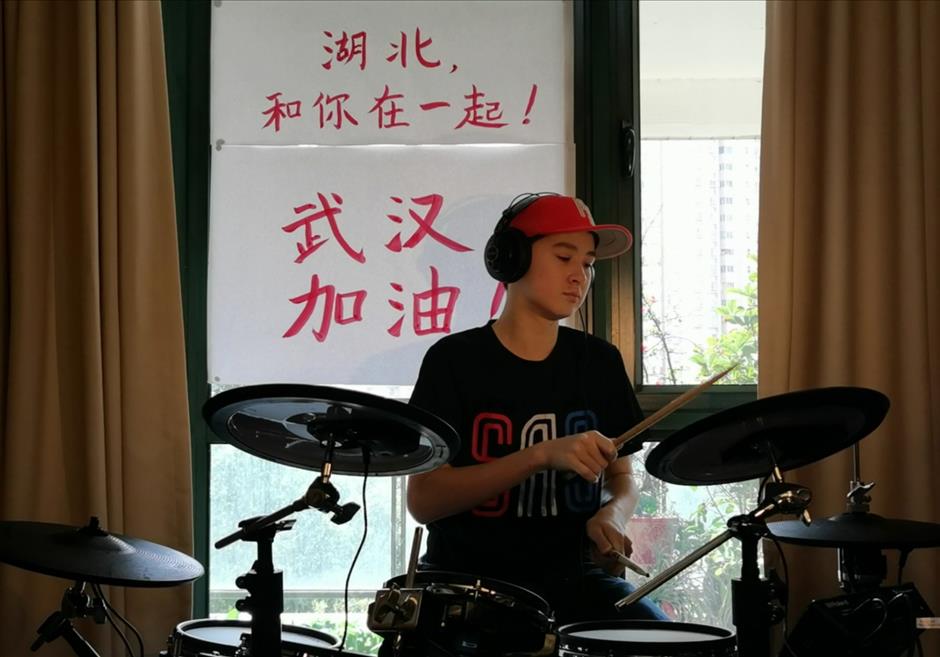 After Cline finished the music score, he sent it to his bandmates, each of whom practiced and recorded their own parts on instruments including piano, flute, violin, guitar and drums. They then sent their recordings for Cline to develop into a music video.

The video, which took its author 10 days to complete, was uploaded onto Youku and Tencent Video, China's two largest online video-sharing platforms. It had been viewed more than 4,000 times as of February 24.

Cline credited his team members for this result, saying their outpouring of enthusiasm was "overwhelming."

"They asked me for the music score before I could even finish," he told Shanghai Daily in a phone interview. "And some even borrowed instruments to play because they left their own in Shanghai."

Jasmine Ruoxi Zhang, the song's singer, says she was extremely grateful when she was invited to contribute vocals.

"Whenever I practiced singing this song, I thought about those patients, and considered myself lucky to be healthy," says she, also a ninth grader at Shanghai American School.

Viewers of the video are encouraged to donate by scanning a QR code. So far proceeds from the donation campaign have topped 90,000 yuan (US$12,857) and they will be sent through Beijing Chunmiao Charity Foundation to hospitals at the forefront in Wuhan.

Cline said he was shocked to see the impact the video has created. When the school put the video on its official website, WeChat account and Facebook page, a wave of support came from all corners of the globe, with lots of online comments expressing sympathy for those afflicted by the infectious disease.

Zhang, the singer, says she was also blown away by feedback regarding the video.

"It's unbelievable that a group of high school students could generate this amount of attention and influence," says she.

She added that praise from teachers, parents and friends were a recognition of her "meager contribution" to society.

Cline agreed and hopes that people in Wuhan can derive hope from the song.

"When this thing (the virus) passes, I will definitely travel to Wuhan to see the city," he said.