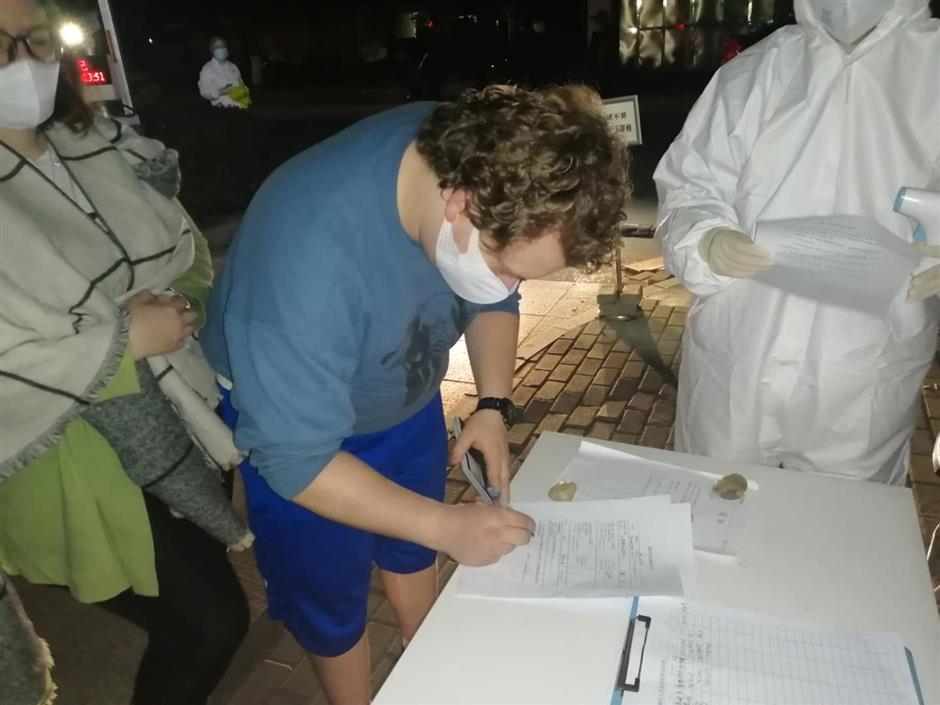 Thomas registers his information on arrival at the neighborhood.

Thomas was uncertain about what he would face when his flight landed in Shanghai. But soon he felt quite relieved as his community offered thoughtful help.

Thomas, who lives in Kangqiao Town in the Pudong New Area, flew back to the US before the Spring Festival, when the epidemic hadn't yet swept across the country. His flight from the US to Shanghai, with a stopover in Japan, arrived at Shanghai Pudong International Airport last Sunday evening.

“Initially I felt nervous,” the American teacher said, as he was a little bit astonished by the strict prevention measures implemented at the Pudong airport. Immigration and quarantine officials were armed with protective gear while passengers were lined in queues, waiting to be questioned and inspected.

The scene gave him a sense of seriousness. It seemed possible that anyone could be infected with the virus, he explained.

Shanghai has imposed mandatory quarantine inspections on all in-bound passengers and orders people returning from — including those having stopovers in — key affected countries including South Korea, Japan, Italy and Iran to undergo 14-day quarantine at home or in designated places for medical observation.

Thomas returned to his Shanghai home in the Ningyi neighborhood via private transport at around 8pm, when he was welcomed by neighborhood workers, community medics and police officers.

“Before he started his returning journey, we had obtained details of his route,” said Zhang Ming, Party secretary of the neighborhood. “We contacted local international schools and companies to learn the whereabouts of their foreign staff. Then, we call these foreigners to learn about their health conditions, returning flights and other information.”

According to Zhang, a neighborhood worker who is fluent in English was especially arranged to meet Thomas, guide him to complete a health information form and explain coronavirus prevention policies to him.

Though trapped at home, Thomas says he has nothing to complain about.

“Everything is good. The neighborhood is so considerate in sending me food and taking express delivery for me,” he said.

Zhang said every foreigner staying at home for quarantine is provided with a “butler” who visits them twice a day, measuring their body temperatures and addressing their problems during the quarantine.

According to the township government, it has picked up 53 people from Shanghai's airports. Six of them returned from the US, 16 from South Korea and 31 from Japan.