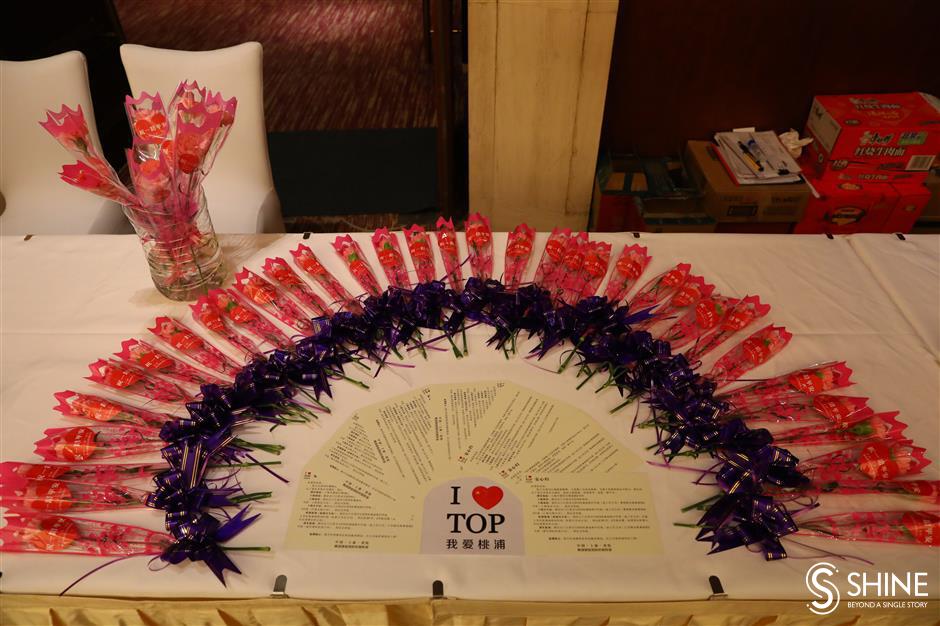 Flowers and travel advice for guests who have completed their 14-day quarantine at a hotel in Putuo District.

The first group of overseas travellers subject to a 14-day quarantine in Shanghai are now free to return home.

Since March 28, all inbound passengers arriving in Shanghai have been required to undergo a 14-day quarantine for medical observation at designated sites as part of the city's COVID-19 prevention measures. They are also required to undergo nucleic acid tests. If the test is positive they must go to a medical facility.

Two Chinese students from the United Kingdom and Japan left the No. 5 quarantine hotel in Putuo District's Taopu Town over the weekend to return to their hometowns in central China's Sichuan and Henan provinces.

The medical workers and staff at the five-star hotel presented each student with a flower to wish them good health, along with advice on how to get to the city's railway stations and airports.

"I'm grateful to the doctors and hotel staff who managed to find medicine for my underlying disease," said one of the students surnamed Liu. After arriving at Pudong airport, she spent four days at a designated hospital and then moved to stay in the quarantine hotel for another 10 days.

"Though the quarantine days were boring, the staff made me feel at home," she added.

A number of local hotels are being used to quarantine the travellers.

The newly designated hotel in Taopu has checked in 191 people since March 28. They are from 27 Chinese provinces and municipalities.

"Apart from strict prevention measures, we tried to offer considerate and bespoke services for each arrival to made them feel at home," said Li Min, general manager with the No. 5 quarantine hotel.

Three teams to take charge of medical services, disinfection and hotel services have been arranged for each quarantine hotel. Many hotel staff applied to take care of the guests, while the subdistrict and township governments also dispatched assistant personnel.

Meals are sent to the door of each guest, and the menus can be adjusted according to different dietary requirements. 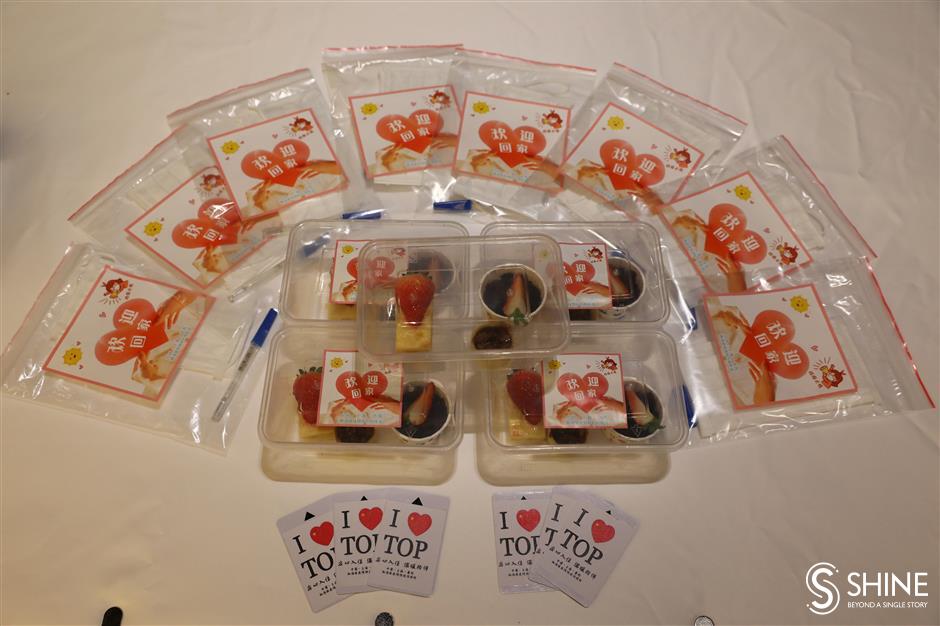 Gifts prepared for travellers arriving from overseas at the No. 5 quarantine hotel in Putuo District. 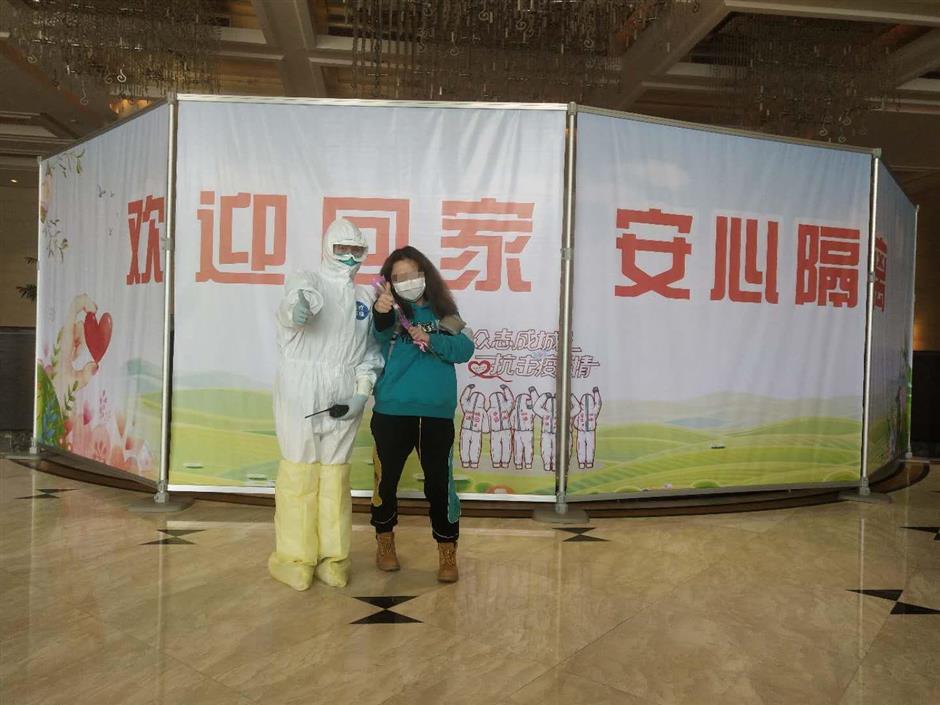 A young woman who had been studying in the UK with a staff member.

At the No. 5 hotel, several customers required halal food, while a pregnant woman asked for sugar-free food. Another customer was allergic to apples, said Li.

The hotel presented two masks, a thermometer and a meal box to each customer when they arrived at the hotel. Medical staff also provided mental consultations through the telephone or WeChat to relieve worries and anxiety. Lego toys were available for children.

"Many travellers were quite anxious, especially when other passengers on the same flight were confirmed as infected," said Lu Jiang, the Party secretary of the Taopu Town.

A temporary headquarters has been set up beside each quarantine hotel. A large screen displays the information for each quarantined arrival. Putuo officials categorized arrivals in different colors according to their physical condition, age, date of check-in and eating habits.

A wireless door magnet mechanism has been installed onto each door frame. It will send an alarm to headquarters if the door of a quarantined traveler is opened.

The work was challenging for many hotel staff but they readily volunteered, Li said.

A young cleaner from central China's Hubei Province had to disinfect the toilets more than 100 times in two weeks.

"My arduous work cannot be compared with the medical workers who rushed to my hometown to fight against the COVID-19," she said.

A 40-year-old hotel staff member fainted after working in a hazmat suit for several hours.

"Management personnel have taken the lead to work on the front line," Li said.

When the first quarantine hotel was set up in Putuo on January 25 to accommodate those from key affected Chinese regions, all the hotel staff quit in fear, said Dai Xumin, general manager with the first designated hotel in the Caoyang area.

Dai said she put a pile of cash on the desk to ask them to stay but no one accepted.

However, inspired by the medical teams from across the nation as well as community volunteers, most of the hotel staff, especially young members, now volunteer to work, Dai said. 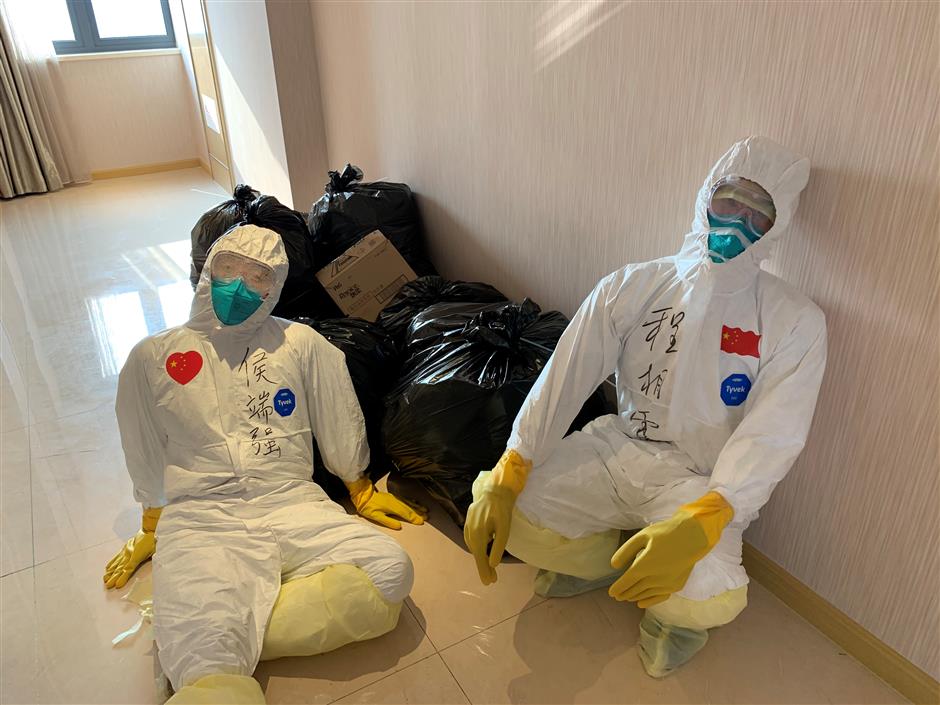 Staff at the quarantine hotel in Putuo District. 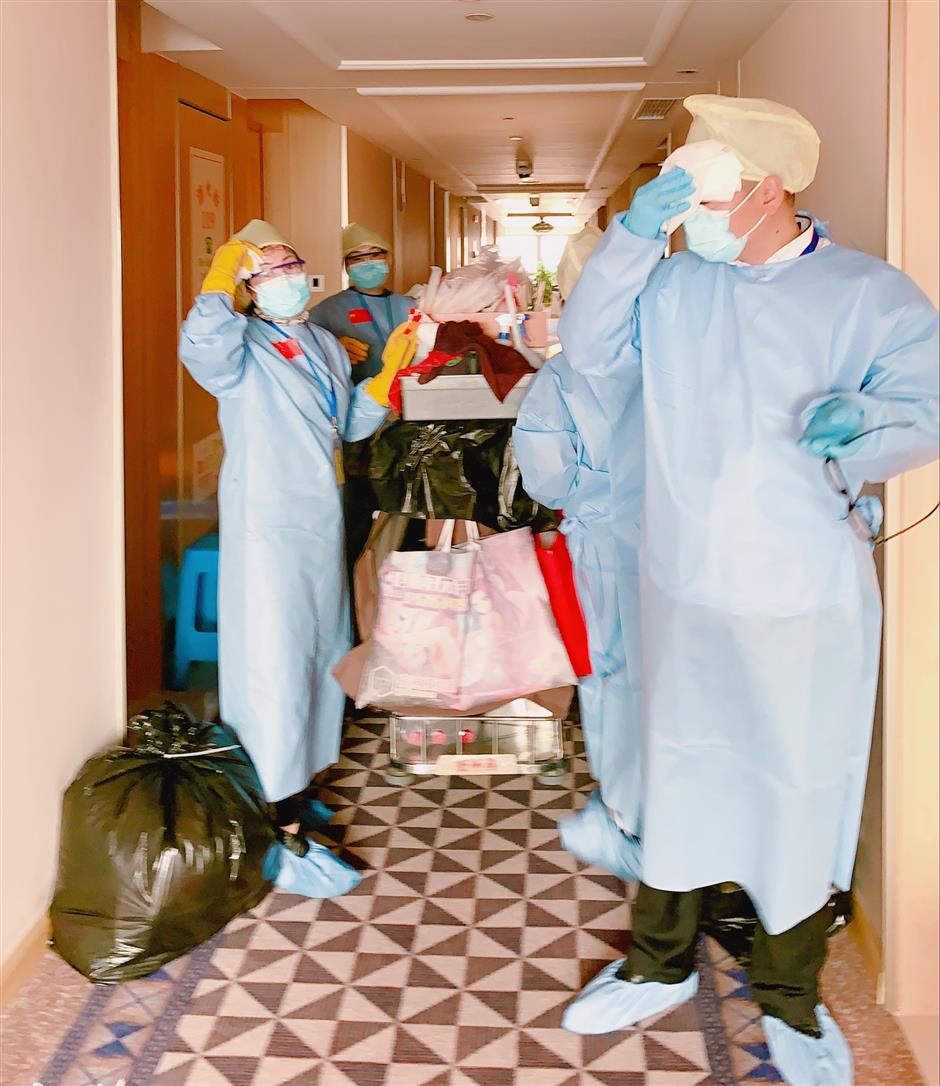 The hardworking staff at the Putuo District hotel.