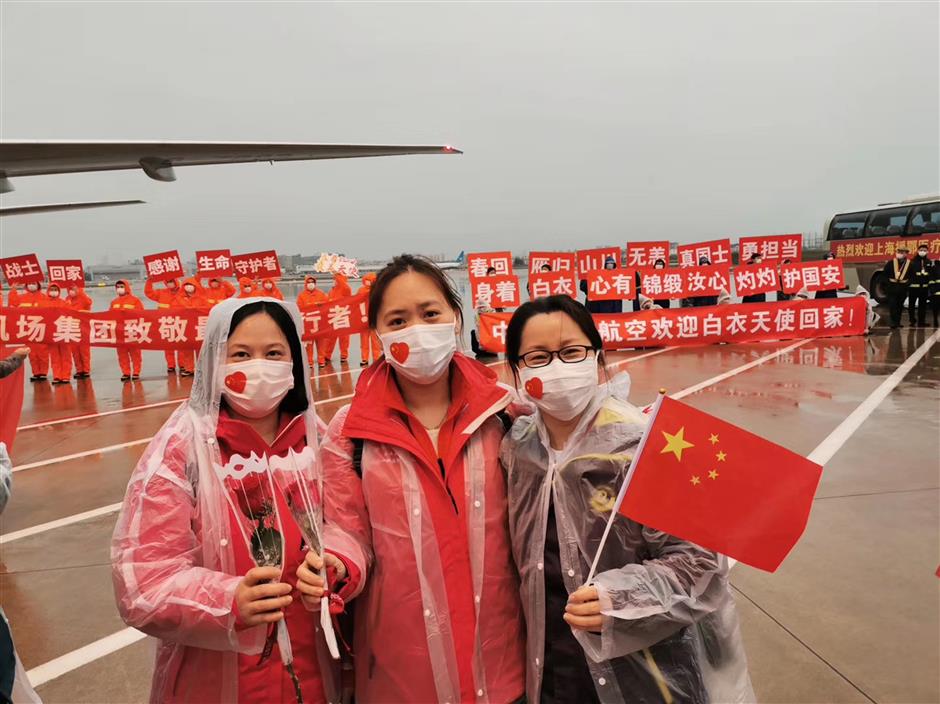 Three nurses from Jing’an arrive in Shanghai after finishing their work in a Wuhan hospital. 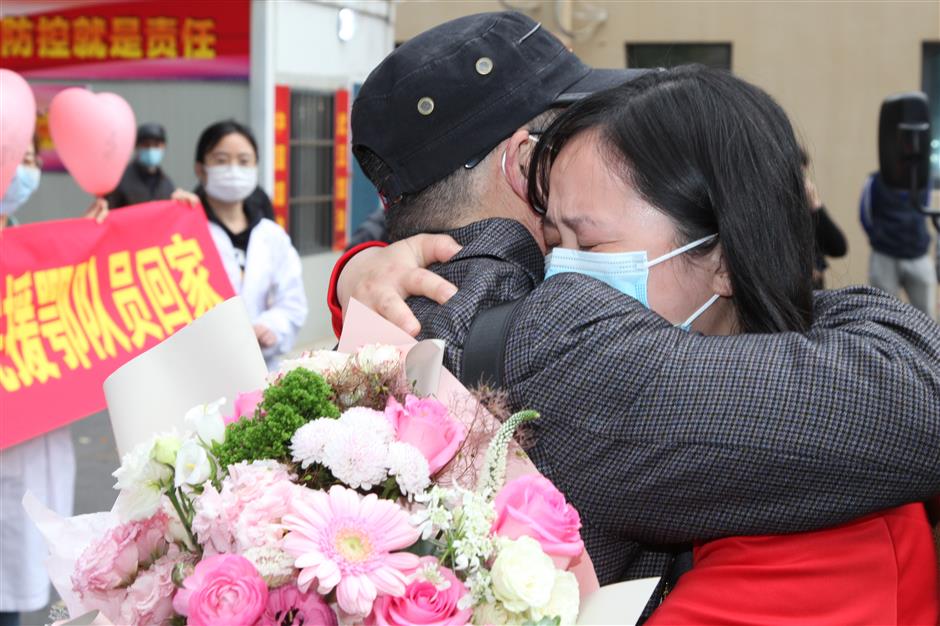 A medic is reunited with his wife after returning from Wuhan and completing a 14-day quarantine.

On April 14, nurse Wu Ruikun burst into tears when she was reunited with family and colleagues after completing the 14-day quarantine imposed on her return from work in Wuhan, the epicenter of the cornonavirus outbreak. She hadn’t seen them for more than two months.

Wu, who works at Zhabei Central Hospital, was among the six medical workers sent by Jing’an District to aid Wuhan in its time of need.

Currently, all six staff have finished 14-day quarantine and been reunited with their families.

Wu and Wu Tingting and Chen Yajuan, two nurses from a community clinic in Pengpu Xincun Subdistrict, left their families and went to Wuhan on January 27. They worked at Wuhan Jinyintan Hospital, a facility designated for coronavirus patients, for more than two months.

“The three of us experienced the first snowfall in Wuhan and later enjoyed the beautiful cherry blossom season,” said Wu Ruikun, recalling an assignment with unforgettable memories.

On March 17, one patient saw a TV news report that the first group of Shanghai medics would be returning home. She asked Wu if she would be among them. When told no, she told Wu t she felt guilty that her infection was preventing the nurse from returning to loved ones.

“I was really touched,” Wu said. “I realized how much we were needed and supported by the people of Wuhan.”

On March 27, that same patient was among the last group discharged from the hospital ward before it closed.

“When she left, we expressed our hope that each of us would return home safely,” Wu said. “I also hugged my teammates. Finally, we could go home.”

Among more than 1,600 medics sent from Shanghai to Wuhan, Wu Tingting and Chen were the only two from a community clinic.

She often worked from 12:30-9am. Her protective clothing was drenched in sweat by the end of the shifts, and she felt chest distress. Despite such hardships, she never complained. Instead, she always smiled, earning herself the nickname “smiling eyes” among patients.

“Some of my patients have become my friends, and we’ve exchanged WeChat accounts,” she said. “They said they would give me a tour of their city once the pandemic ends and treat me to the local specialty of hot dry noodles.”

She recalled the patient who had just come out of quarantine and accompanied the nurses to the train station when they left on March 31.

Psychologists Wu Rongqin, Liu Yaliang and Shi Dongqing from the Jing’an Mental Health Center started working at a Jiang’an temporary hospital on February 25. Later, they were dispatched to “pop-up’ hospitals in Wuhan, returning to Shanghai on March 31.

“When we first entered a temporary hospital, it took me a half-hour to get into protective gear,” Liu said. “As psychologists, we lacked experience in wearing heavy protective clothing. The eye goggles fogged up in 10 minutes, so we had to enter the wards hand in hand to find our way.”

He said the patients cheered their arrival and thanked them for coming all the way from Shanghai.

“I was proud that Shanghai medics had become such a positive brand,” he said.

Wu Rongqin said both patients and medics could become physical and emotional wrecks. What they needed most was a safety valve, such as crying loud or doing exercises.

“We always told each other to just cry if you needed to cry,” she said. “It’s really a good way to relieve pressure.”

She recalled a patient surnamed Wang, who recovered from the virus and became a

“She was outgoing and optimistic,” Wu said. “She helped us learn a lot about the mental health of other patients.”

However, when that patient was in quarantine, she herself developed mental stress, suffering insomnia and irritation.

“I told her to vent her adverse emotions in several consultations via WeChat, like getting some exercise when she was in a bad mood,” Wu said. “Gradually, the happy and optimistic Wang returned.” 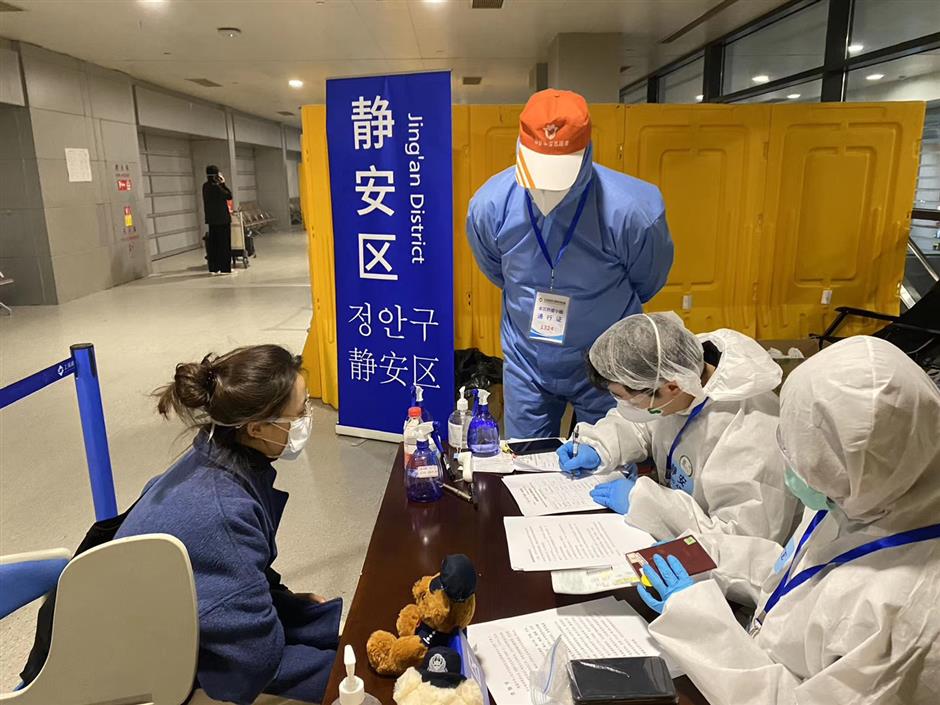 A team of volunteers from Jing’an helps transport airport arrivals to home or quarantine sites. 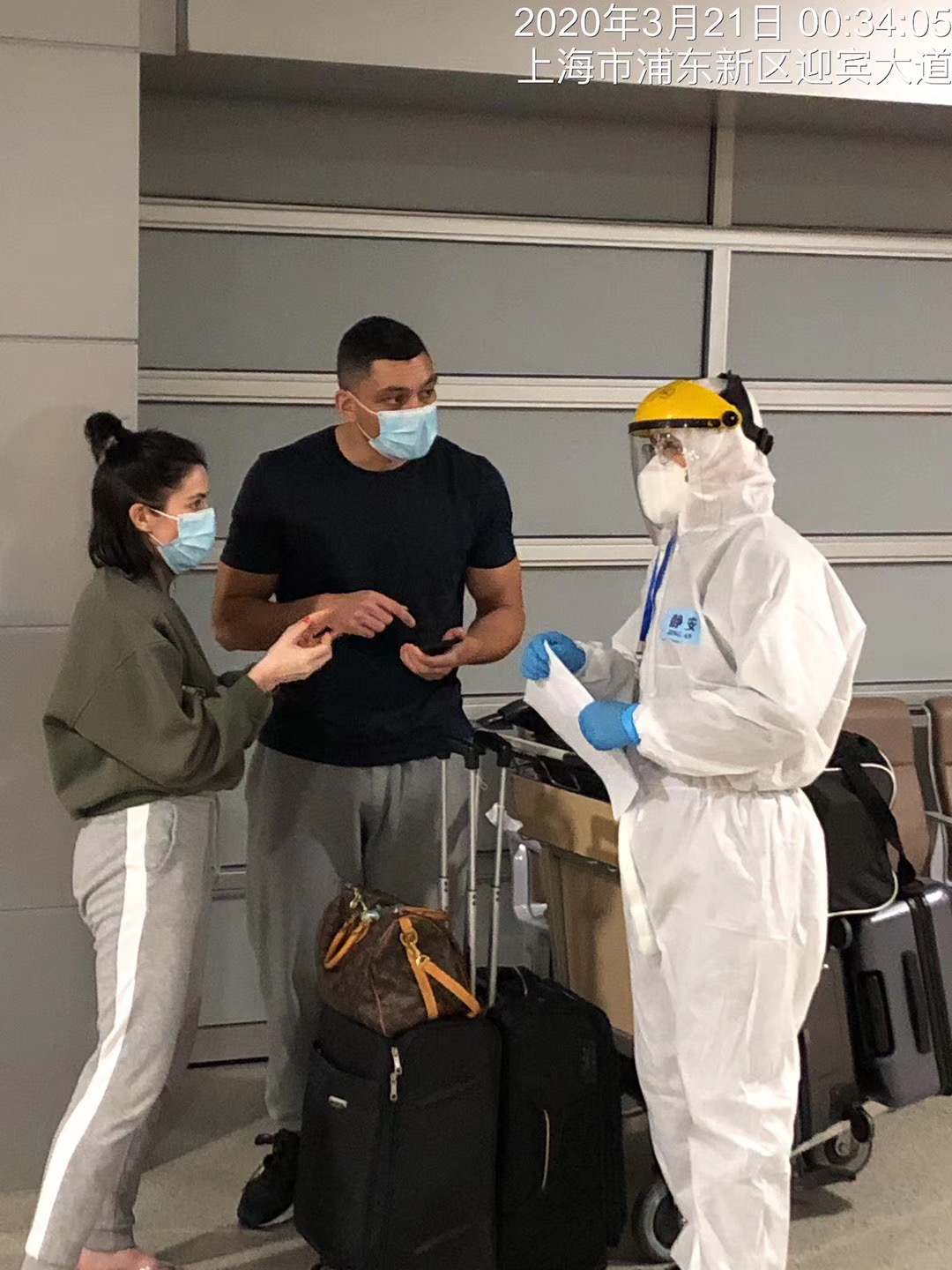 ‘Together, we are a powerful force in the battle’

Though the pandemic is well contained in Shanghai, volunteers at airports are still busy safeguarding the gateways into Shanghai.

Gan Chentong, an official from the publicity department of Jing’an, is one of them.

“I’ve been working at Pudong airport for more than a week,” he said. “My job is to transport inbound passengers to quarantine sites. It sounds easy but in fact it’s a hard job.”

One of the earliest challenges was donning protective gear. Then, escorting people to different quarantine sites proved time-consuming and exhausting. But the worst part was waiting around for new groups of passengers to arrive.

“Waiting was hard,” he said. “One day, I waited at the airport from 11pm to 8:30am to get enough people to transport.”

After flights landed, passengers were required to register their information one by one, and then guided to the reception desks of different districts for transport home.

“When all that was done, they were guided to buses,” Gan said. “We had to wait for a bus to be at least half-full before hitting the road.”

However, he found satisfaction in the work.

“I helped a French woman with three children and nine pieces of luggage, and she kept expressing her gratitude to me,” he said.

Gan said there are 19 members on his team.

They include Wang Weilong, a Wuhan native, didn’t hesitate to join in the effort. Chen Jialu and Chen Ran are fluent in English and very patient in explaining quarantine procedures to incoming foreigners, he said.

“Together, we are powerful force in the battle against the virus,” he said.