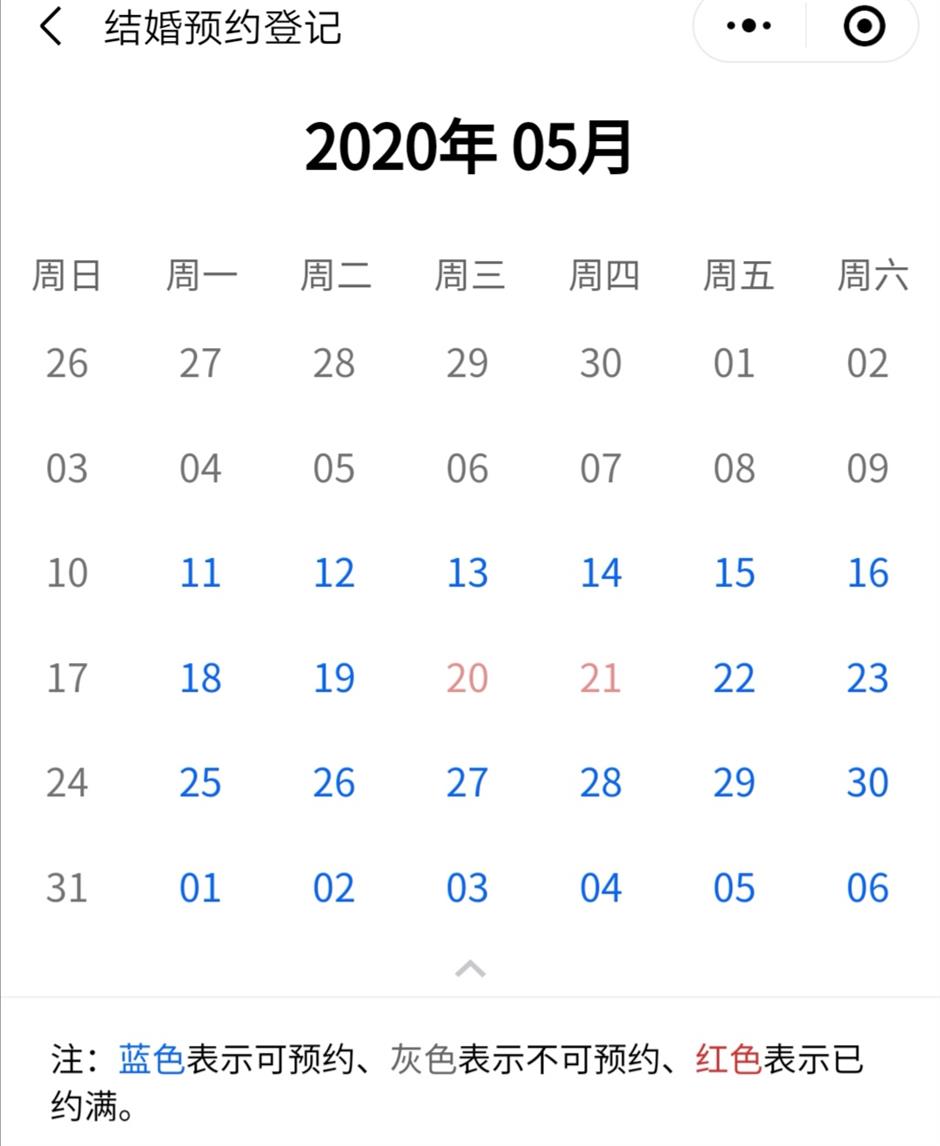 Red signifies that all reservation slots at the Huangpu District marriage registration center for May 20 and 21 are occupied.

Reservations for this day at marriage registration centers in almost all districts of Shanghai are full.

Marriage registration centers were prepared for the expected avalanche of demand from lovebirds who want to tie the knot on what is believed to be an auspicious date.

"All reservation slots for the day at the center have been occupied via the online platform or calls," Wu Yuexin, deputy director of the Yangpu District marriage registration center, told Shanghai Daily.

"We adjust the number of reservation slots daily based on demand, and have already significantly increased the amount available for reservation for May 20.

"We have received more than 100 reservations so far, which have made all slots full.

"All center staffers will work earlier than usual on the day to satisfy the surging demand.

"For those who fail to make a reservation, we will still issue marriage certificates for them, but we will disperse lovebirds to prevent gathering."

The city's civil affairs authorities have introduced staggered registration to prevent too many people gathering.

Marriage reservation numbers and times should be “scientifically” set and balanced, a notice issued by the Shanghai Civil Affairs Bureau states.

The reservations in districts such as Changning, Huangpu, Xuhui, Jing'an, Putuo, Hongkou, Minhang, Baoshan, Jiading and the Pudong New Area for May 20 are also fully booked.

May 21 also sounding similar to "I love you" in Chinese has also proved popular to exchange vows.

In districts such as Huangpu, Changning, Xuhui, Jing'an, Putuo, Baoshan, Jiading and the Pudong New Area, ceremonies are fully booked.

It is a long-standing tradition in Chinese culture to get married on an auspicious date.

Shanghai's civil affairs authorities decided to work overtime on February 2 this year with an expected surge of marriage demand because the Sunday was a rare symmetry date, and 2020 sounds like “love you, love you” in Chinese.

It was also the ninth day of the lunar month in the traditional Chinese calendar; nine sounds similar to “long” in Chinese, bearing the auspicious meaning of a long-lasting marriage.

However, they cancelled the plan due to the COVID-19 outbreak.

A total of 731 couples drew their marriage certificates during the Qixi Festival, also known as Chinese Valentine's Day, last year, which fell on August 7.

The total was about double the daily average.

More than 98,000 couples tied the knot in Shanghai last year, a decrease of 6.09 percent from a year earlier.