Couples clamor to get married on 'once-in-a-lifetime' date 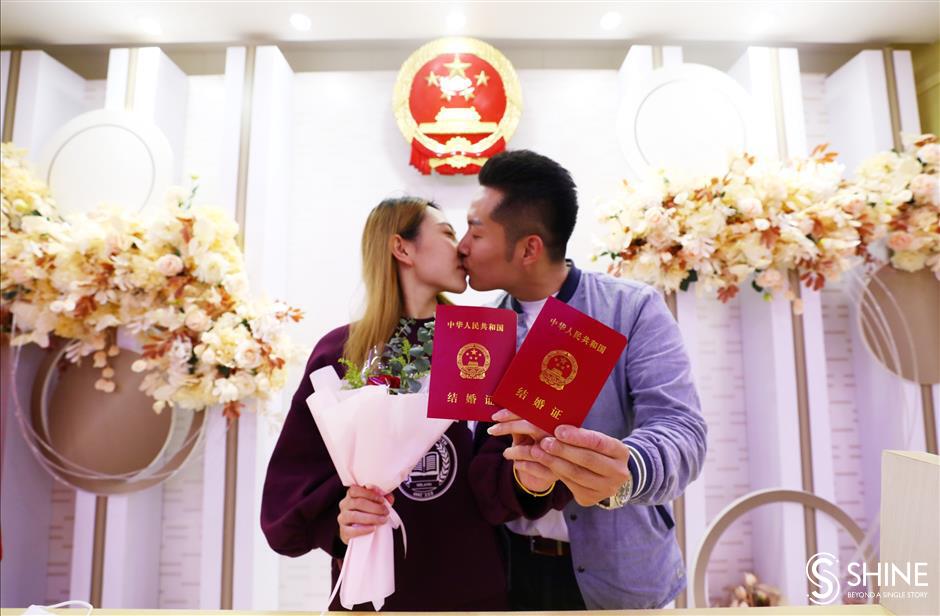 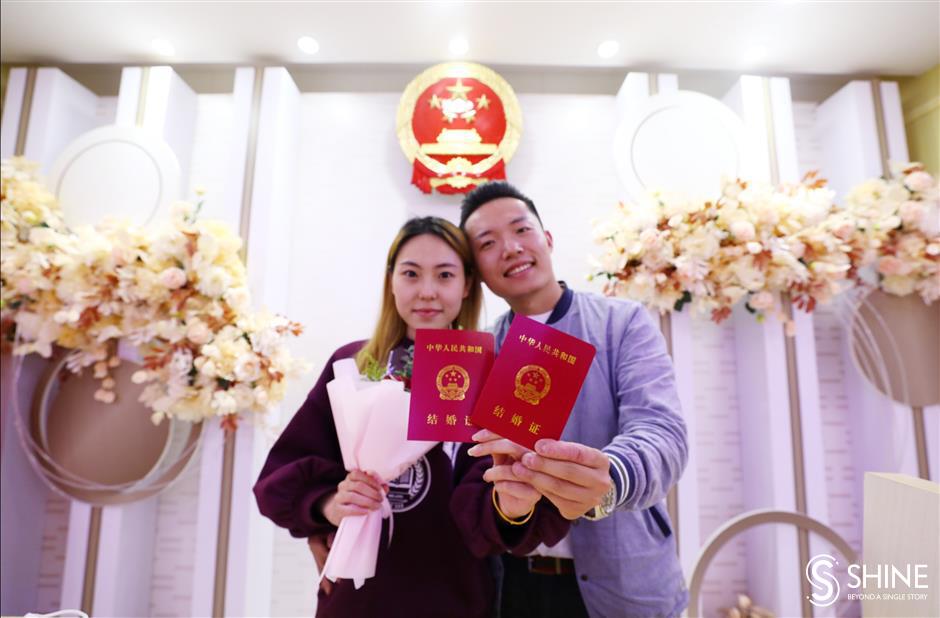 Li and her husband Ye show their marriage certificates.

Shanghai lovebirds flocked to marriage registration centers across town on Wednesday, as the date May 20, 2020, sounds similar to ai ni ai ni wo ai ni, or “love you, love you, I love you,” in Chinese.

She held a bouquet of flowers from her soon-to-be husband.

"My boyfriend and I were closely checking for reservations since March but unfortunately found all slots were fully booked by April 19, just one day after reservations for May 20 opened," Li told Shanghai Daily. "It's a very popular date for marriage."

Though reservations are recommended, they are not mandatory to draw marriage certificates. To seal their love on this special day, the couple made sure to grab an early spot in line.

"We decided to wait here overnight because it's a very rare date," she told Shanghai Daily.

"It's a once-in-a-lifetime date, and we don't want to miss it," Li's sweetheart added.

"We picked the date one and a half years ago when we booked our wedding banquet, which will be held next month," he said.

The couple brought two stools and waited overnight outside the center. They drew their marriage certificates at around 9:40am.

The couple met at a party three and a half years ago.

"This is a big, sweet moment in our life and we will have a banquet with our parents in celebration," said Li. 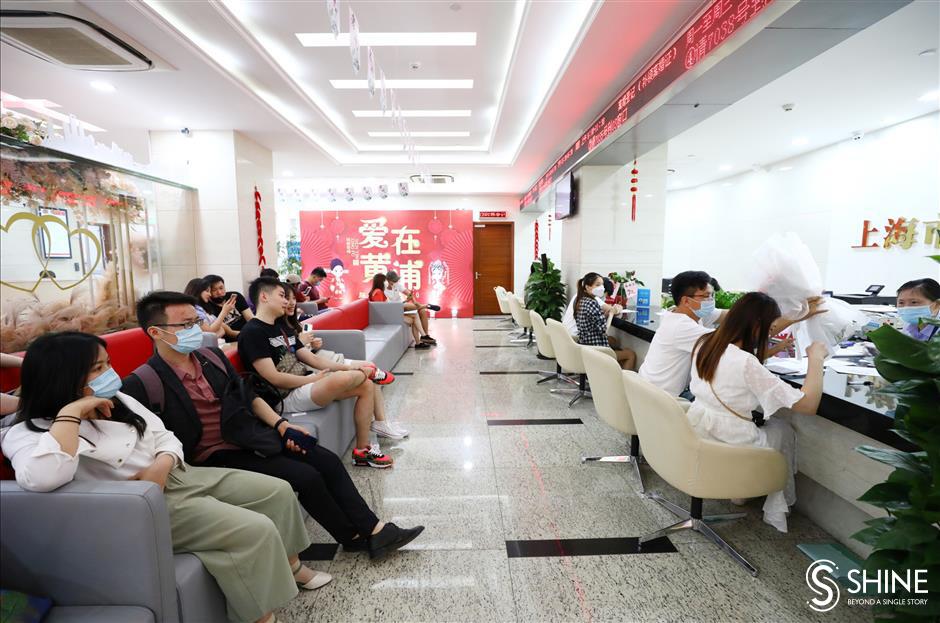 Jack Ni presented flowers to his wife at the center for the momentous occasion.

The couple arrived at 5am after also failing to make a reservation.

"We wanted to try our luck because it's a good date," he said.

The lovebirds met each other in 2015.

"We ordered breakfast via a delivery platform this morning, but will have a sumptuous lunch as a celebration," he told Shanghai Daily.

Yu Jiani, another bride, made a marriage reservation one month ago.

She still waited more than one hour at the center due to the large volume of lovebirds waiting for certificates of their own.

"It's a sweet day and all the waiting is worth it," she said with a smile.

An official with the center surnamed Zhang said it had made preparations for the expected avalanche of demand on what is believed to be an auspicious date.

"The 100 reservation slots for today were snatched quickly," she told Shanghai Daily.

"We opened half an hour earlier today for lovebirds and will grant marriage certificates for everyone who comes, even if they failed to make a reservation," said Zhang. 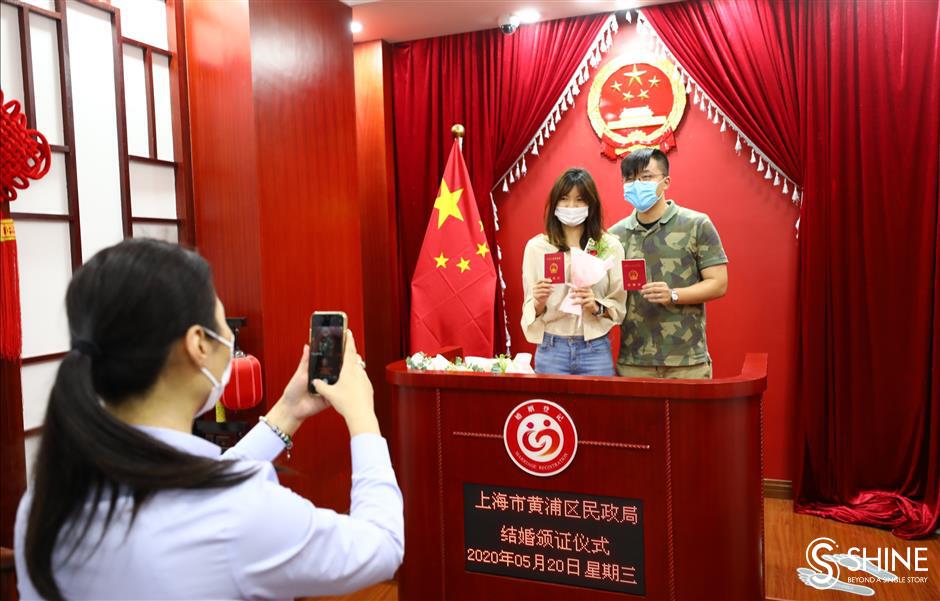 A couple pose at the Huangpu District Marriage Registration Center on Wednesday.

At other marriage centers, the scenes were similar.

May 21, which also sounds similar to "I love you" in Chinese, has proved popular for exchanging vows as well.

In districts such as Huangpu, Changning, Xuhui, Jing'an, Putuo, Baoshan and Jiading as well as the Pudong New Area, ceremonies are fully booked.

It is a long-standing tradition in Chinese culture to get married on an auspicious date.

A total of 731 couples drew their marriage certificates on the Qixi Festival, also known as Chinese Valentine's Day, last year, which fell on August 7.

That total was about double the daily average.

More than 98,000 couples tied the knot in Shanghai last year, a decrease of 6 percent from a year earlier. 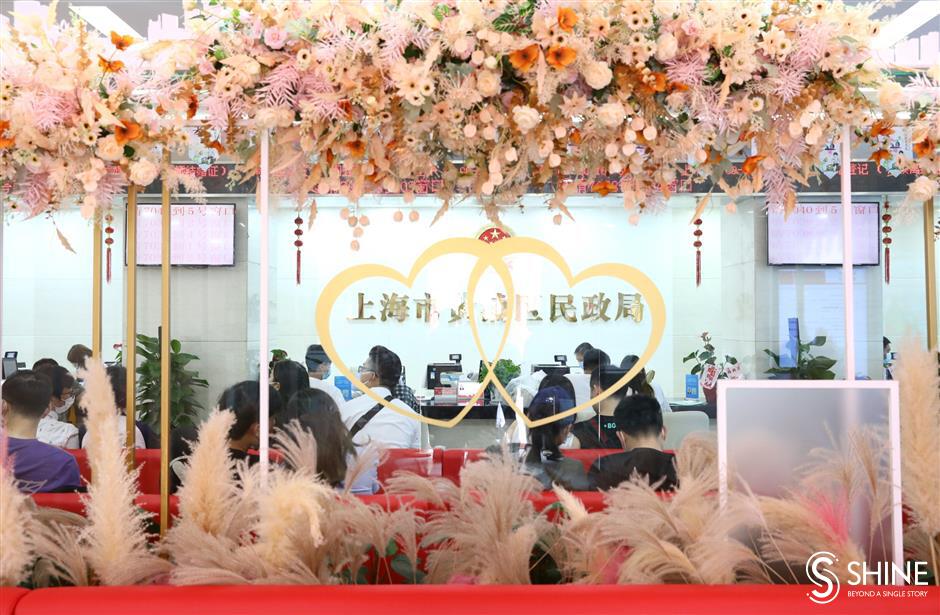 A view of the Huangpu District Marriage Registration Center on Wednesday.